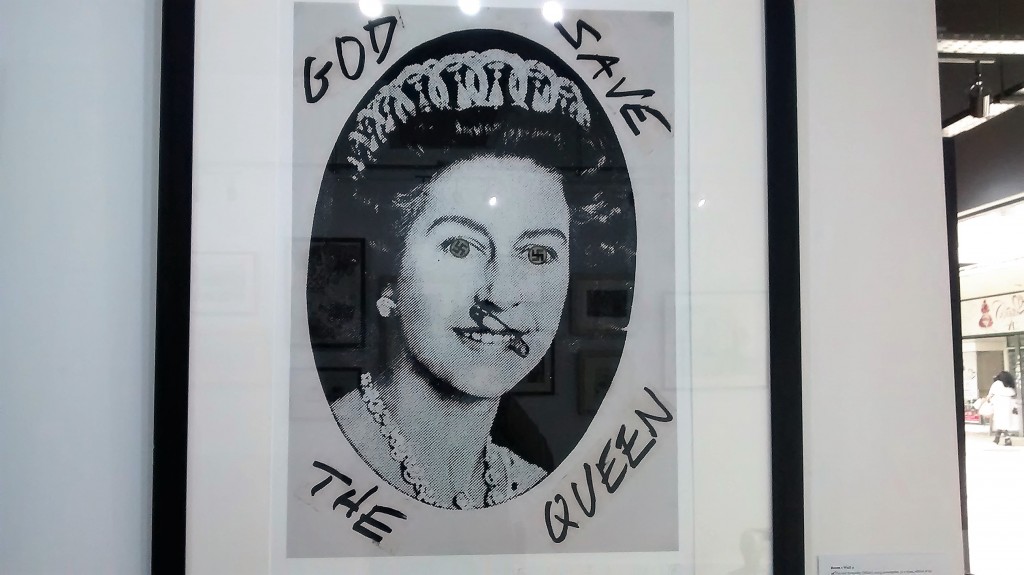 Head off out into the wilder reaches of Greater London today and a place not always immediately associated with the capital’s cultural capital nor the finer aspects of aesthetical good taste, with which this blog usually concerns itself.  In fact, it’s not so much fine art, as design and the documentation of a cultural phenomenon, that I’m checking out today and, as for good taste, I definitely won’t be seeing any examples of that – quite the opposite.  But first I have to get to my southern Shangri-La, a journey not helped by the fact that having arrived at Victoria I find all the trains going in the direction I want seem to be delayed or cancelled.  Fortunately, I’m not in a hurry so decide to take the scenic route by getting the tube down to Brixton and then the 109 bus, which winds a slow but determined path through a sequence of picturesque little villages – well, maybe they are, I was reading the paper and not really looking out the window – until I finally arrive at the end of the line and my destination…Croydon. 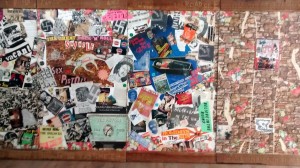 In retrospect, it seems rather fitting to have started my bus ride at Brixton since it was there that I first met Jamie Reid, the man whose exhibition I’ve travelled all this way to get to see and whose creative endeavours now fills the walls and floors of the Rise Gallery in St George’s Walk.  Even if his name is not all that familiar, you’ll almost certainly recognise some of his works for he was the graphic designer employed by the famously infamous Sex Pistols to promote their dastardly image of rebellion and all things anarchistical.  And whether you like the music of that particular pop group or not, I think it’s fair to say that they come second only to the Beatles when it comes to having had a truly iconic influence on the whole of popular culture for a particular generation of kids and grown ups who maybe hadn’t quite grown up enough.  It’s not just that the style of their simple, short, noisy music was copied by dozens of other bands, nor that their deliberately ragged, uncoordinated clothing with its mix of bondage wear and safety pin accessories was copied by legions of fans.  The whole anti-social punk ethos extended through the daftness of pogo dancing, phlegm flinging and mohican haircuts to an attitude of swaggering nihilism, mockery and protest against, well, against just about anything that was on offer, and it all became surprisingly popular.  But if the hippies of an earlier generation had expressed their anti-authority rebellion by holding up a flower and talking about love, this time things were a good deal less passive.  The peace sign was reversed into a two-fingered salute accompanied by a shout of ‘up yours’ directed towards anything that was perceived to be part of the establishment, whether represented by the pomp rock inanities and excesses of groups like Genesis or Yes, or the equally absurd ceremonial formalities accompanying the Queen’s silver jubilee celebrations. 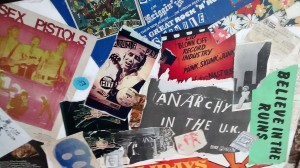 So, how did I get to meet up with Reid, the man who, even if he didn’t actually invent it, definitely popularised the cut-up, mixed font, blackmail style lettering style that came to symbolise the anger of Punk’s antagonistic message.  Well, thirty or so years ago, about a decade after Punk’s brief flaring had subsided, I was one of the dozens of artists working in the all-volunteer collective that ran Brixton Art Gallery.  Another couple of members, Jan Zalud and Derek Stockley, suggested that Reid, a fellow toper from the local Railway Tavern, should be given a show in the Gallery.  And so it came to pass that every day for a couple of weeks Reid would arrive at the Gallery, sit down on the floor, rummage around in a bin liner full of scraps of paper and then cut out bits and stick them straight on to the Gallery wall.  The result of all his efforts was an amazing, thirty foot collage of graphic memorabilia charting various bits of Sex Pistols history, mixing anarchistic slogans and photographs with advertising posters and odd bits of detritus including a bounced cheque signed by Malcolm McLaren, the famous Svengali of Punk.  At the end of the exhibition I vaguely remember attending a Bacchanalian closing down party during which Reid was ceremonially given a shave and haircut by an ad hoc gang of French tonsorialists. 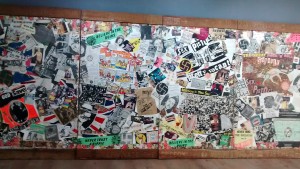 And, to complete the anecdote, the next day when I went in to help clear up the mess, I was just in time to see Reid and his partner, the one-time actress Margi Clarke, exiting the Gallery with the eight wooden panels onto which the collage had been glued.  I distinctly remember them saying something about how they would shortly return and help put up the replacement wall which we needed in order to hang the pictures for the next exhibition.  Needless to say, that didn’t happen and it was the last time I ever saw Reid or Clarke but I have seen the panels from the Brixton Art Gallery a few times since they were kidnapped.  They’ve been displayed in a couple of galleries over the years and apparently they’re on their way to Milan shortly, but for now they’ve briefly come to rest in Croydon. And, I have to admit, they look pretty good despite the fact that they bring back memories from all those years ago when I had to help lug a load of hardboard panels from the timber yard across to the Gallery and then install the new wall – which, at the time, was a real bloody nuisance.  It would definitely have been so much easier just to scrape off the collage and paint over it with a couple of tins of white emulsion but, in retrospect, I guess I’m pleased that we didn’t get the chance to engage in that bit of iconoclastic vandalism.  Although on the other hand, I suppose, the act would have been as equally in keeping with the original anarchistic Punk attitude as Reid selfishly ripping off a collective of volunteer artists and chuckling to himself as he made his escape. 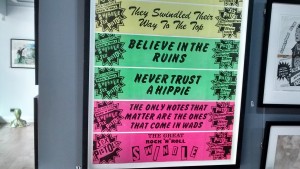 There have been a few Punk exhibitions recently which have come in for a bit of criticism from McLaren’s son (Joseph, who apparently runs a shop selling underwear) who has lambasted them for being supported by the establishment and so in contravention of the original values of Punkism.  But I can’t help thinking he’s misunderstood what Punk was all about, suggesting that it had some kind of romantic idealistic motives rather than the sort of snotty, adolescent, yobbish selfishness that it really represented.  For an old socialist hippy like myself – well, that’s what I was about thirty years ago – it’s not too hard to draw a line between Punk’s very deliberate, destructive anti-socialistic behaviour and that of the Thatcherite materialistic revolution that followed not long after.  It’s a connection perhaps supported by the fact that McLaren’s wife Vivienne Westwood went on from designing Punk fashion to pushing her outrageously expensive couture variations and that Johnny Rotten was happy to go on a celebrity reality TV show and make an ad selling butter. Similarly, Reid has put hefty price tags on all the stuff in this current show and I’m not sure whether this should be construed as a change of policy from his earlier graphic slogans which exhorted people to help themselves by going shoplifting, or merely an evolution of the concept. 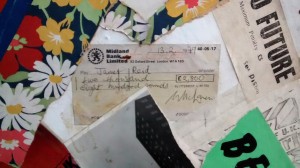 If protesting is the prerogative of the young then grumbling is the equivalent default position of the old but time smoothes over most things and I confess that I found it impossible to resist a nostalgic chuckle at how some of the deliberately outrageous provocations of Reid’s Punk posturings and rantings are apparently ageing into design classics…well, almost. 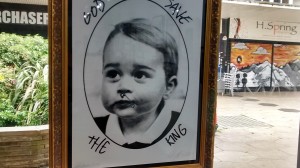 PS If you go to the Rise Gallery website and hunt around you should be able to find a very impressive 3-D virtual tour of the whole exhibition.