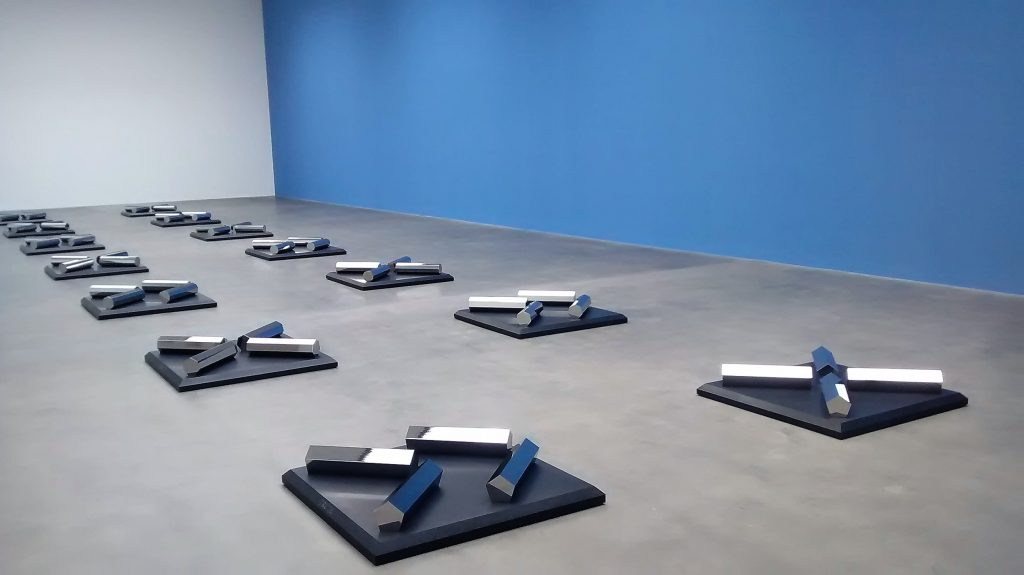 Sometimes when I’m going out on a ramble round a bunch of galleries I plan ahead and try to pick out artists and exhibitions that I think will have some linking feature, whether it’s a commonality of style, subject matter or some other art historical resonance.  More often, I sit down in a café with a bacon roll and a frothacino and take a quick look through the latest NECA gallery guide and then pick out any names that are familiar or shows that sound interesting and then try and find ones that are geographically close together.  It’s a bit of a random way of doing things but often a sort of theme or thread starts to emerge when I get round to trying to write up my thoughts that, with a touch of metatextual dexterity, enables me to find some underlying metaphor that links everything together.  Well, that’s what I like to tell myself, anyway.  But not this time.  Today was one of those Forrest Gump selection box days where the artistic chocs turned out to be a very mixed assortment of hard and soft centres and for me, at least, there seemed to be a lot more of the former than the latter. Which presents a sort of a problem since, despite what anyone might assume, I don’t really like moaning on about art that I don’t like when I’d much rather be encouraging people to go to see stuff that I think has some kind of validity and value.  After all, what is the point of trying to draw people’s attention to an exhibition only to then say it’s not worth going to see.  Ok, it may save someone a journey but tastes differ and one person’s crunchy praline is another’s smooth coffee cream.  In short, it probably makes sense to ignore everything that I am about to write and just go along to the various galleries and make up your own mind. 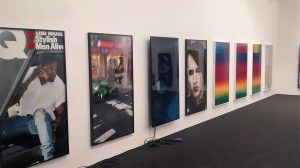 Having said all that, today’s particular selection of postprandial, or post-bacon roll, petits fours starts off at Marylebone station and the short walk required to get to the two Lisson Galleries situated in their separate spaces on Bell Street.  First off is Cory Arcangel’s mix of high-definition prints and short video films which charts yet another contemporary artist grappling with the problem of how to represent and comment upon our current multi-media, info-tec saturated world.  And, once again, he seems to think the best way of doing this is to offer up a stack of images randomly culled from the web – you know the kind of thing, a mix of Russian fight planes, a dog walker a cute pussy cat etc etc etc.  I’ll leave it to you to decide whether yet another outing for this tired metaphorical trope really has any chance of adding anything very useful or interesting to our knowledge of the contemporary digital world.  As I’m sure I’ve written before, I find these kinds of chaotic collages all very samey and boring and I really don’t think that they act in any way to elucidate anything about the contemporary world, other than to expound once more that there’s a lot of different digital material out there all buzzing away in cyberspace.  By way of contrast, across the road at the other Lisson Gallery is a display of Stanley Whitney abstracts in which blocks of bright colours are stacked up in different variations.  I’m afraid that the most that I can say about them is that no one could possibly think that these were in anyway unpleasant – by which I hope I have successfully conveyed exactly the sufficient amount of faint praise with which to damn them. 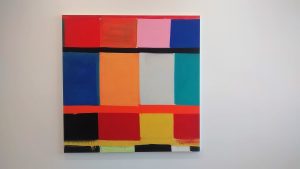 Not a great start to the day and, sadly, the disappointment continues after a quick tube ride gets me to my next stop at the Gagosian Gallery near Kings Cross station which is displaying a couple of Walter De Maria’s vast floor sculptures.  Both works incorporate highly polished stainless steel elements as chips in a mathematical game that riffs on sequencing geometric shapes.  Unfortunately, I prefer my Minimalism a bit more austere and humble whereas these works strike me as way too ostentatious in the overall grandeur – or maybe that should be pretentiousness – of their presentation.  At which point I decide to give up on north London and take the Piccadilly line south to get into the centre of town and Hauser & Wirth. 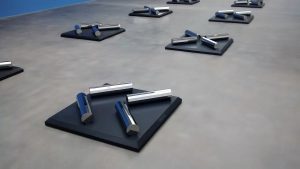 So, what’s wrong with the shows here?  Well, I’m not sure that all that much thought has gone into any of the works by Felix Gonzalez-Torres, which is a bit of a drawback when the art is meant to be Conceptual.  If sticking up a couple of full length mirrors and a pair of lightbulbs and chopping up a series of letters and random photographs into a series of wall-mounted jigsaw puzzles makes me think of anything, then it’s the solitary thought that this kind of a show simply doesn’t provide enough visual interest or intellectual stimulation or sustenance to warrant spending more than a couple of minutes glancing at it and walking on.  Either that, or it’s so bloody clever and I’m so hopelessly daft that I’m missing some wondrous message or piece of artistic wisdom.  Whichever is the case, it doesn’t really matter as I’m out the space and heading on a couple of doors down the road to get to the other H&W gallery for some paintings by Guillermo Kuitca which at least provide a little bit more of a diversion.  The artist seem to be playing abstract games with some of the lines and shades that the Cubists messed about with a century ago when they were trying to discover the philosopher’s stone that would grind the three dimensions of everyday life onto the two dimension that is all a canvas can ever offer. 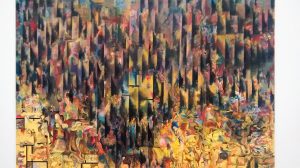 These are reasonably pleasant and put me in a bit of a better mood as I saunter along into Cork Street and Waddington’s where I get the feeling that someone (I’m not sure who, since no curator is mentioned in the gallery leaflet) has gone to quite a lot of trouble to try to push forward their pet theory.  The idea, as far as I can make out, is that the art of Patrick Heron, one of Britain’s earliest and most important abstract artists, evolved directly from his interest in the non-figurative work emanating from post-war Paris as exemplified by Hans Hartung, Pierre Soulages and Nicolas de Stael.  Which, I suppose, is all quite fascinating if not desperately controversial, but also all just a trifle too arcane to be of much interest to very many people.  I suppose had someone asked my opinion before I’d seen this show I’d have said that I was under the impression that Heron’s path to abstraction arose via a confluence of the figuration of Braque’s late cubist artworks along with a touch of the landscape tradition from some of the St Ives School of artists.  And now, having seen this show, I’m not really all that inclined to change my mind, since it seems to me that the interests of the post-war Europeans were much more centered on abstract shapes and gestures and the tactile qualities of paint as shown by the rather grim and gloomy selection of their paintings displayed here.  Heron, on the other hand, I think gets his inspiration from the shapes and tones of the organic world and is much happier celebrating the simplicity of nature’s range of bright and beautiful rainbow of colours.  Anyway, I’m not sure the debate is all that worth having, suffice to say that Heron’s paintings are so very much the most attractive of all the works in this show. 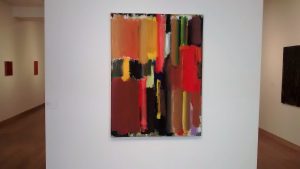 Finally, at the bottom of Cork Street is the Pace Gallery and a large selection of Louise Nevelson’s great clusters of wooden detritus gathered together and given an allover coat of black paint.  I quite like these assorted abstracted relief structures but, in keeping with the tone of just about everything else I’ve written about today I can’t help myself from having one final grumble.  Surely the display is much too cramped and would have made for a far more enjoyable viewing experience had the curator been bold enough to display fewer pieces and given the rest of them all a bit more room to breathe.  And in contradiction to the sentiments expressed in my opening paragraph, I do seem to have come up with a theme for the day:  it’s just unfortunate that it can be summed up by the one word ‘hurrumph’. 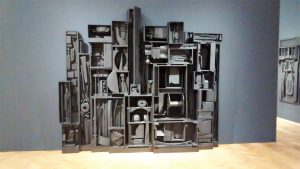 2 responses to “Chips in a Mathematical Game”