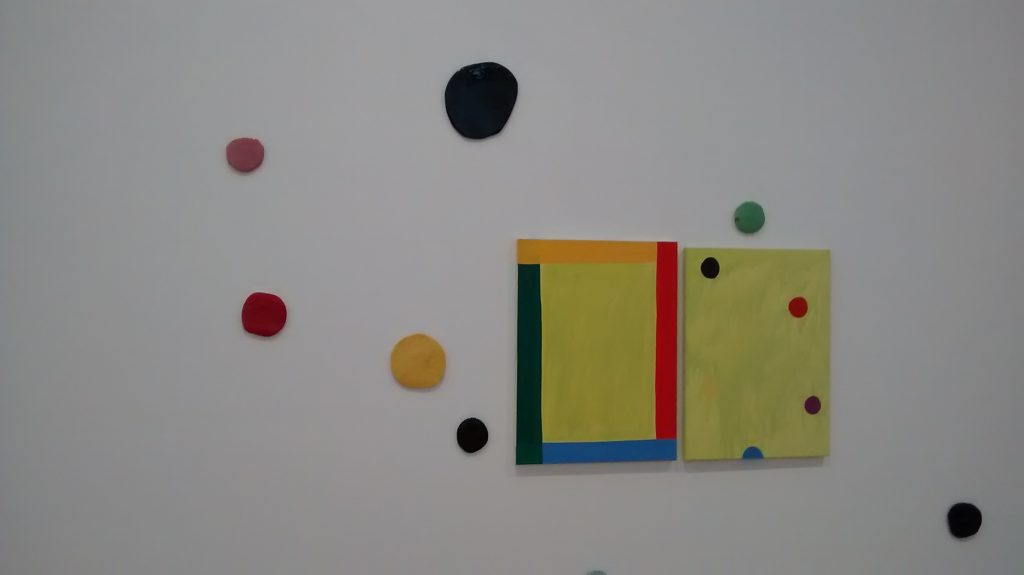 To Mornington Crescent tube station and I think the last time I came here I made some witty reference to the late Humphrey Lyttleton and his comedy radio quiz show that put this place on the map, so I won’t bother doing that again.  And anyway, this particular mornington I’m in a bit of a hurry to get to the gallery as there are urgent matters to attend to before I can concentrate on looking at the any of the art.  Fortunately when I press on the buzzer at DRAF I get let in straight away and receive confirmation that there are indeed facilities at the far end of the gallery.  So my first look at today’s show is something of a blur as I speed through all five interconnected display spaces and get to that all important final small room.

Shortly afterwards, back at the front desk, I take the trouble of mentioning to the invigilator that there’s no soap in the toilet and that the stack of paper towels are all soggy and useless.  I suppose I sort of expected her to thank me for the information and then get up and replenish the stocks but instead she just scribbles something down on her jotter.  I also ask her about the scribbled writing on the mirror:  ‘Tobo lada mas ninglem sabe.’ Is it art or just graffiti?  She mumbles something about it being a matter of opinion but, since it’s not listed in the little gallery guide, I’m guessing it’s unauthorised and at least I don’t need to bother trying to figure out what it means, although I do try googling it later*.  As for the proper art well, on my initial, speedy survey, a lot of it looked quite interesting but it did all seem a bit of a mix.  And if there was any particular theme that linked all the works then it wasn’t very obvious to me so, once again, I ask the woman at the desk and she helpfully suggests that I read the short essay in the gallery guide.

Evidently, DRAF (the David Roberts Art Foundation) has temporarily handed over their space to Rozsa Farkas and Zhoe Granger, a pair of curators and writers who work together under the common title of Arcadia Missa.  But as for what it is that connects the work of the 17 artists that they’ve chosen to fill the space, that’s less clear and not at all helped by reading their essay in the gallery guide.  The exhibition, ‘…looks at artists who have sought practices inverse to the individualised, satellite modes in which we are increasingly expected to work.  In doing so, these artists actualise, imagine or politicise the spaces in which they find themselves, fostering a still-needed sense of locality and producing directed responses to problems definitive of their time, place and situation.’ 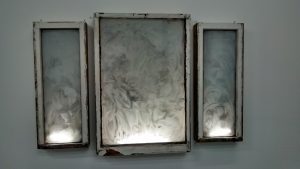 There are quite a few more paragraphs of this kind of peculiar prose that almost seems designed to obscure meaning rather than elucidate sense, which is a pity because the pair have actually managed to pick out some quite interesting artworks and displayed them all rather sensitively and successfully.  Well, not quite all.  Beatrice Loft Schulz has been allowed to splosh up a meandering swirl of abstract lines that runs continuously along quite a few of the gallery walls.  In itself, it’s just a bit boring and silly but for the curators to deliberately use it as a backdrop for one of those famous grid series of Bernd & Hilla Becher water towers, seems crassly disrespectful, since it so obviously distracts from the cool rigour of their strict formalistic photographic practice. 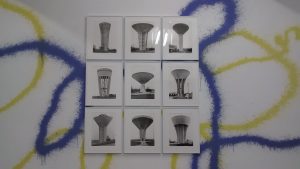 Aside from that specific example of aesthetic criminality, the rest of the displays all look pretty good.  I liked Jesse Darling’s objets trouves, whereby a selection of old whitewashed windows wrenched from their walls and dumped on a building site have been given new life by being place in a gallery.  The crunchy materials and subtle colours just look rather attractive to me, as does Anne Imhof’s rather more contrived floor sculpture, consisting of a pair of aluminium suitcases, a lot of dried up condensed milk and a suitably sliced up rotting banana.  I confess that I just thought it looked quite an intriguing and attractive arrangement of shapes, shades and textures and it was only after I’d referred to the gallery guide I realised that I should instead have been admiring, ‘The restraint of this piece (which) is also a reflection on the social expectation on the body, and the often social obligation to retract within.’ 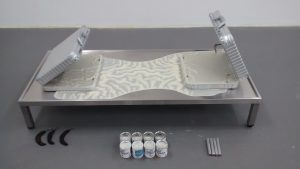 At which point I gave up reading the guide.  After all, it’s just a bit off-putting if I’m just naively wandering around enjoying the colours, shapes and other formalist aesthetic qualities of the artworks when apparently I should be constructing some convoluted theory about satellite modes, sense of locality and the intricacies of body politics and social obligations.  So, what else stood out for me?  Well, the big, brash Jenny Holzer LED display with its never ending strings of word flickering back and forth provided a dynamic contrast to all the subtle colours and textures of most of the other sculptural pieces.  And I even quite liked a couple of the videos here, which is something that rarely happens.  Both Lena Tutunjian’s grainy CCTV staged footage of people shoplifting and Holly White’s parodic estate agent promo for a putative post-apocalypse property portfolio shared a sort of absurdist humour that appealed to me.  Although, as I think I may have indicated earlier, such is the impenetrability and poe-faced pretentiousness of the written statements of the curatorial couple who chose all the works that I find it hard to believe they could possibly share my sense of humour.  Consequently, I rather assume that instead of smirking and smiling wryly I should have been keeping a straight face and pondering other profundities. 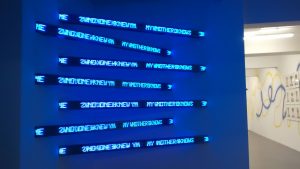 Despite exiting the exhibition with the strong suspicion that my humble appreciation of their show might have been completely at odds with the experience with which its authors intended to elevate its audience, I nevertheless enjoyed my visit. 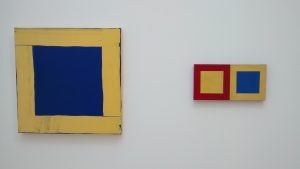 And so it’s back on the tube and a few changes to get to Aldgate East and the Whitechapel Gallery which has given up the two very large floors of its main display space to a retrospective show of colourful abstract works by Mary Heilman.  I confess that I’d never heard of the artist before nor ever consciously seen any of her art.  But, since the venerable Whitechapel has given her such a very large space to show her wares, I suppose that I’m now meant to feel as if a shameful lacuna in my supposed artworld intelligence has finally been plugged.  Well, I suppose that I might feel a bit more inclined to think that way if this first introduction to the works of the artist was a bit more extraordinary and that the works were a bit more exceptional.  The paintings, coloured ceramics and even the painted chairs are all very pretty and if used as the basis for fabric designs would, I dare say, make as sunnier set of curtains or sofa covers as has ever graced the showrooms at Heals or Habitat.  And if, as I sort of assume, the works were intended to evoke an emotional response akin to the sort of brief frisson of ocular delight achieved by gazing at a bunch of daffs or looking out at a cloudless blue sky, then that not ignoble ambition has indeed been achieved.  But I really do think that that is the absolute limit of the inherent qualities of these artworks.  Further, I think I would have got that message from having seen three or four paintings, while the dozens and dozens on show here do the artist no favours but merely emphasise the very narrow limitations of her chosen style. 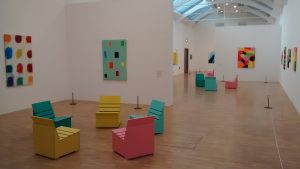 Having said all that, I feel just terrible as if I’ve trodden on the tail of a kitten or just explained to a five-year-old that Santa isn’t completely real but then nobody said that trying to be an honest art crit hack was going to be an easy job.

*According to Wikipedia, Tobo is a locality in the Tierp municipality of Uppsala County, Sweden; Lada is a Russian car marque; Ninglem is a Portuguese Christian name and Sabe was the handmaiden to Queen Padme Amidala, as featured in Star Wars’ The Phantom Menace.  All of which suggests to me that spiritualists should be on the lookout for a poltergeist resembling Humphrey Lyttleton which may have returned to haunt the cultural hotspots of this area.