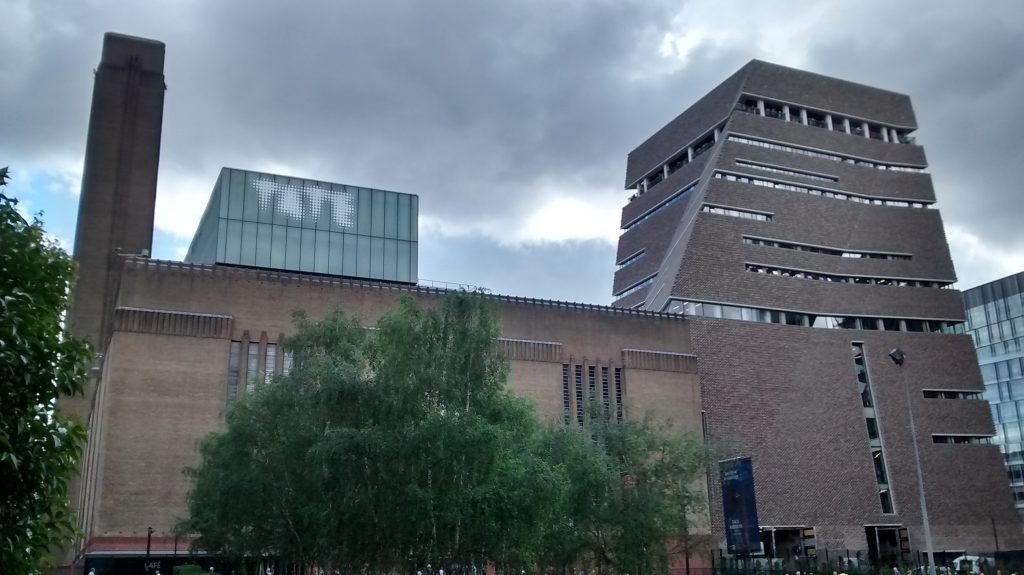 To Southwark tube station and then walk on to join the queue of people waiting to get in to see what the new extension to Tate Modern looks like.  Today is one of the special preview days for members although, as the rain starts to pitter patter gently down, I can’t say that being a member feels all that special, just a little bit soggy.  Still, if having to put up with a bit of drizzle is the price to pay for getting advanced entry and a chance to check out this latest addition to the capital’s cultural infrastructure, it’s probably worth it.  At least, it will be if, during the next few days, I can bump into some other Modern Art aficionados and casually drop into the conversation that I’ve already had a look round the place.  Of course, that only works if they haven’t yet made their pilgrimage and the strategy can backfire horribly if the person I’m trying to impress turns out to come from a more elevated rung on the artworld hierarchy and managed to get into one of the patrons’ previews – in which case they won’t have waited in the rain and will doubtless delight in detailing all the nibbles and drinks they received and all the stars and celebs they met.  As it is, the fifteen minute crocodile shuffle that I have to endure to get into the building only attests to my lowly status and the fact that the Tate has an awful lot of other paid-up members, a fact reconfirmed on finally entering the building and being subsumed within the sea of other people all swirling around inside.  The result is that it’s very difficult to get a proper look at either the art or the architecture on this visit since the overwhelming sensation is one of being gently swept hither and thither by the charming human tide of an art-appreciating middle class, into whose demographic I feel rather comfortably ensconced.  I can’t help thinking that if, heaven forbid, some calamity were to strike this place today then future sales of the Guardian would plummet. 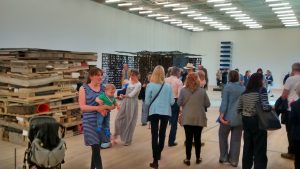 I suppose it’s worth reiterating that there really are so many people bumping around and blocking the view that it would be folly to try to make any serious critique of the design of the space or the sensitivity of how it’s being used but…well, I’ve got to write something in this blog and sometimes first impressions can be insightful.  So, first off, I think the building looks pretty good from the outside with the chunky new Switch House, as it’s to be known, clinging quite comfortably on to the old familiar Boiler House bit.  But then before actually getting inside the building, the question does arise as to what exactly is the purpose of the new extension?  I suppose most householders weigh things up quite carefully before getting the builders in, calculating whether the advantages gained from having a swimming pool stuck in the basement or an extra room squeezed into the loft will be worth all disruption and expense.  While it would, of course, be convenient to be able to take that morning dip without having to get the bus down to the local lido, and having a place ready and prepared for granny to go when she starts behaving a bit too temperamentally, would be useful, such architectural add-ons don’t come cheap.  So, what about Tate Modern?  What was it that the Director, Nicholas Serota, thought the original building so lacked that he was willing to go to all the effort of fundraising the £260m required to get it fixed?

Answering that question is no easy matter since it’s hard to see that any of the problems associated with the original Boiler House part of Tate Modern are going to be much affected by the arrival of its new, younger sibling.  The dark, narrow stairs, the tardy lifts and the occasional pinch points among the layout of display spaces are all irredemiable design faults.  And as for my biggest gripe with the place, I’m sure there’s no chance whatsoever of that being rectified until the crown finally drops from Serota’s steely grasp.  The reason I only ever visit the special temporary exhibitions here and don’t bother to look at the permanent collection any more is that it’s been chopped up, juggled about and rehung in such a way as to embody a Post-Modern curatorial practice that Tate Modern introduced to the world and with which I fundamentally disagree.  Frankly, I much prefer the traditional pattern whereby each different art movement has its own separate room and these rooms are then set out in chronological order for the visitor to walk through and so gain a reasonably logical impression of the art historical development of modern western visual culture.  Of course, everyone knows that this involves a simplification and standardisation that is in many ways fictional but I still think it makes a great deal more sense and is definitely preferable to the trend that has replaced it, whereby artworks from all different times and places are now gathered together under the auspices of the vaguest of thematic strands.  Furthermore, there seems to be a tediously determined effort nowadays to shoehorn in works by unfamiliar artists from faraway places amongst the more recognisable and accepted famous names who were once thought sufficient to define the parameters of the cultural developments of the past century and a half.  While doubtless the reasons for doing this are prompted by noble motives, trying to distend the previously acknowledged canon of Modern Art, that emerged from the cultural swirl of late 19th century Europe and Northern America and continued buoyantly throughout the whole of the 20th century and into our current new one, seems to me to be a wholly misguided attempt at rewriting history.

Anyway, whatever anyone else may have had to say about their experience of visiting the original Tate Modern, I really don’t believe that a single person, among the millions of visitors who each year tramp up and down the six floors and sixty-plus rooms filled with thousands of paintings and sculptures, photographs and videos, ever exited the place and then complained that there wasn’t enough to see.  Nevertheless, the opportunity to display yet more art does seem to be the main reason for the new extension.  Well, sort of.  There are eleven floors in the new Switch House and yet only four of them are set aside as display spaces, the rest being a mix of restaurants, shops, bars, office space and a viewing platform.  And then when it comes to these specific four floors, only about fifty percent of the space is available for putting up pictures or laying out sculptures, the rest being taken up by lifts, stairs, toilets and another cafe.  There’s also quite a lot of dead space on each of these floors which, I think, is a result of the overall design shape of the extension.  The building is a sort of massive twisted rhomboid but the twist, which undoubtedly helps make the building look dramatic when viewed from certain angles, also makes for a ridiculously, unnecessarily awkward shape when it then comes to trying to lay out the internal exhibition areas.  I think it’s also probably a contributory factor for why there’s no obvious route round the rooms on each floor and why some of the spaces feel a bit cramped.  Although, I admit that maybe those elements of confusion and discomfort were due to the excessive number of visitors snooping around all eager, like me, to get their first look at what was going on.  I suppose my final grump about the design of the space is with the bridge on the fourth floor which provides the physical link between this new Switch House and the old Boiler House.  It’s just such a mundane, utilitarian structure when surely here was a golden opportunity to create some really exciting and spectacular architectural feature. 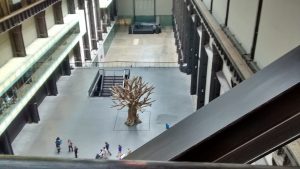 And what about the art in the new Switch House?  Well, perhaps unsurprisingly, it seems to be very much a curatorial continuation of what’s on offer at the old Boiler House, albeit on a smaller scale.  Consequently, I have the same set of grumbles.  Ok, perhaps the themes around architectural environment and social engagement are just a little bit more focused and, since there no paintings or works that date from before about 1950, the mash ups are not quite so pronounced, but there are still far too many very unfamiliar artists.  All in all, there’s quite enough here to make an old-fashioned Modernist like myself groan although, to end on a positive note, there is one obvious highlight that’s worth picking out.  One of the larger exhibition spaces has been given over to stage a mini-retrospective of works by Louise Bourgeois and, while I’ve never been a great fan of Spiderwoman in the past, this time I was finally won over and concede that her discomforting displays of feminist fetishist trophies really do all look rather impressive. 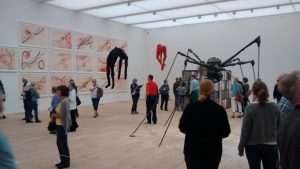