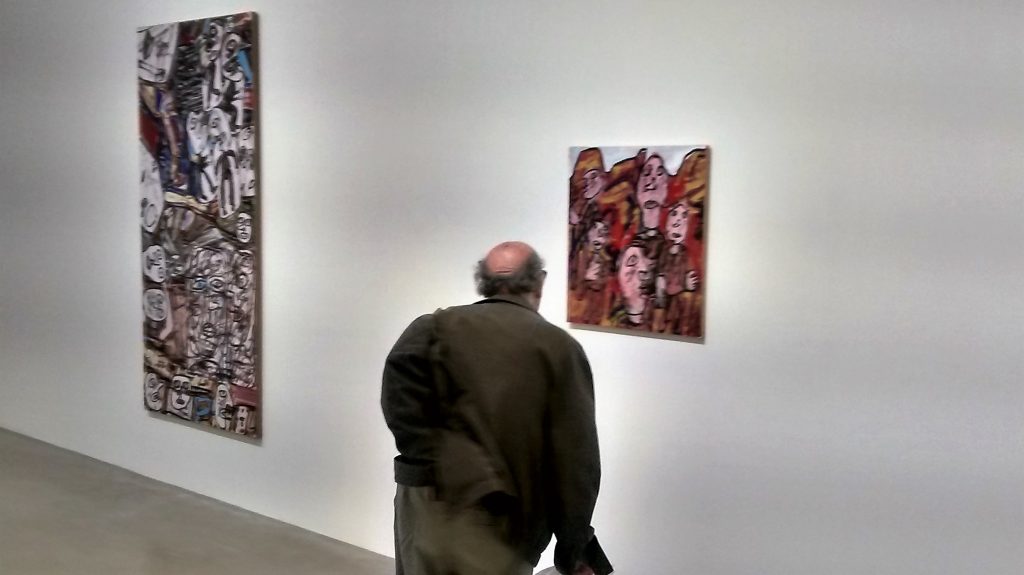 Time to catch up on a bunch of the exhibitions showing at some of the commercial galleries in town – so it’s off to Bond Street tube station and the short walk south to get to Timothy Taylor, where the display of late works by Jean Dubuffet makes for a good start to the day.  Dubuffet was famous for his interest and promotion of what he termed Art Brut, which usually gets translated as Outsider Art and is, broadly speaking, the term used to encompass the creative output produced by anyone working outside the framework of the professional artworld establishment.  Typically, this has come to centre on the paintings, drawings and, less commonly, sculptures of people coping with varying degrees of mentally disability.  But originally it also included graffiti and the strange and wonderful things that children produce, at least those that haven’t yet reached the developmental stage of self-consciousness when they start wanting to conform to society’s expectations, rather than follow their own free-spirited paths to creativity.  As for Dubuffet himself, he found that he could tap into a similar kind of inspirational fount, unfettered by any of the typical self-imposed aesthetical constraints concerning style, good taste or technical acuity.  His route to achieving this state of prelapsarian enlightenment was to collect the doodles he made on scraps of paper when his mind was otherwise engaged talking to friends on the telephone.  I think it’s fair to say that Dubuffet was too much of an artist not to tweak, prettify and generally develop these subliminal sketches, but the results still carry the sort of appealing innocence, intrigue and beauty that we associate with childhood and the id, before the responsibilities and compromises that accompany the journey into adulthood force the ego to take over control and start running things for us.  At least, I think that’s what psychoanalytical theory suggest is what happens to curtail the creative energy that we all once shared when we were all much younger.  Anyway, the current display contains work covering the last twenty years of the artist’s career and includes a range of scribbles, scratches and jottings along with some more controlled collage-like arrangements where crudely outlined characters seem to be trapped in their own wide web world of randomness.  Which, I suppose, could be some sort of prescient metaphor for where most of us find ourselves situated today. 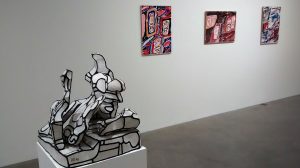 And so on to Beaux Arts and a mixed bag of paintings by Craigie Aitchison, another artist who ploughed his own very specific individual artistic style.  While definitely not part of the Outsider Art world, Aitchison nevertheless shared some of the characteristic use of bold blocks of colour and simplicity of design that might almost warrant the term child-like when coming to describe the series of portraits, still lifes and crucifixion scenes that typified his output.  Perhaps a more accurate term to describe his painterly style would be faux naif, which suggests the artist went to a great deal of determined concentration and hard work to make his works look as if they were dashed off spontaneously and without the involvement of any effort at all.  It’s a very hard trick to pull off and when he falls short, his paintings can look just a little bit too twee and disingenuous but when he succeeds, as he does most of the time, the results are all rather delightful. 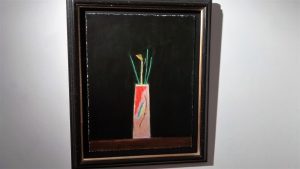 Crossing the road and entering the Cortesi Gallery involves a bit of a jolt to the senses and a move away from the mild reverie of Aitchison’s timeless figuration to bump up against the forcefully avant garde collages and metallic reliefs of Ivan Picelj.  Apparently Picelj was a leading figure in the world of Croatian art in the 1960s, a sphere of artistic endeavor with which I have to confess that I am not overly familiar.  The style of his works, however, is not at all geographically constrained.  Far from it, the bold, repetitive geometric patterns of his works on paper, just as much as the abstract reliefs, constructed from lined-up ranks of bite-size pieces of wood, brass and aluminium, are as groovily modernistic as the world of Austin Powers.  Sadly, they look just as dated.  I suppose all the works in the show here carry a sort of nostalgic patina harking back to the time when the future held the promise of a wonderful sci-fi wonderland but, with hindsight, they now look to me about as silly as a kipper tie or a turtleneck sweater. 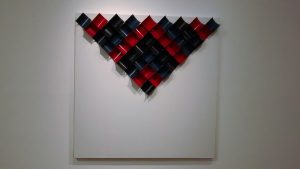 Next comes Annely Juda Fine Art and a rather impressive selection of small sculptures by the late Anthony Caro.  Apparently these plinth-based pieces represent some of the final series of artworks produced by Caro and, I think, mark a definite return to form following on from some of the weaker, gigantic constructions with which he seemed to have become sidetracked a few years ago.  The works on display here, which fuse his usual lumps and chunks of metal offcuts and scrapyard detritus with clumps of moulded clay, have a more rounded and organic feel than most of his usual works.  And while these are still basically just a continuation of his practice of playing around with various arrangements of abstract shapes – an artistic game of chance that shaped his long career – these examples feel more resolved.  And I wonder if it’s too simplistic a metaphor to connect the sense of comfortable completion, that some of these pieces evoke, with the culmination of a lifetime’s work spent continually shifting shades and shapes around, trying to achieve that magical aesthetical lock that can transform a confusion of forms into an experience of art. 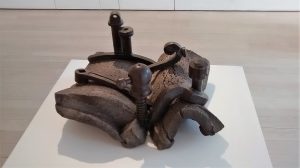 The final stop of the day is at the Alison Jacques Gallery which offers up another interesting historical survey show, this time through a series of paintings and small sculptures from the 1950s by the Brazilian artist Lygia Clark.  The exhibition traces the zigzag path the artist took during that decade experimenting with various simple geometric shapes that, to the viewer, manage inevitably to suggest space and depth.  So, there are various paintings and drawings of combinations of triangles and parallelograms which evolve into small, architectonic arrangements of what might be the walls and floors of potentially larger superstructures.  Finally it seems that Clark hit on one of her trademark designs, the so-called bicho, a small construction of hinged aluminium shapes that could be folded into various patterns.  I think the original intention of the artist was that displays of these kinds of artworks would be left around in the gallery for visitors to play with and that the participatory act of reforming the metal into different origami arrangements was a distinct part of the art.  Of course, times move on and, sixty years later, such works have become much too delicate and precious for this to be allowed to happen anymore.  Although, maybe it’s just a little bit sad that what were once live, movable art insects have now become just more art historical specimens, their wings stilled and their bodies forever entombed, each within their own perspex display cases. 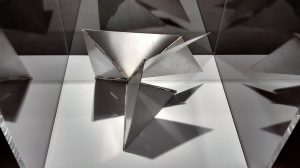 I seem to recall seeing another one of these little bichos only a couple of days ago on display in one of the galleries of the Tate Modern’s new extension wing, a fact which I casually mention to the man behind the desk at the front of the gallery.  He confirms that I am indeed correct as he spotted it too when he was fortunate enough to attend one of the special patron viewing previews at the Switch House. Thankfully he forgoes the opportunity to tell me about the nibble and drinks, stars and celebs that he also saw that evening.

One response to “As Silly as a Kipper Tie”