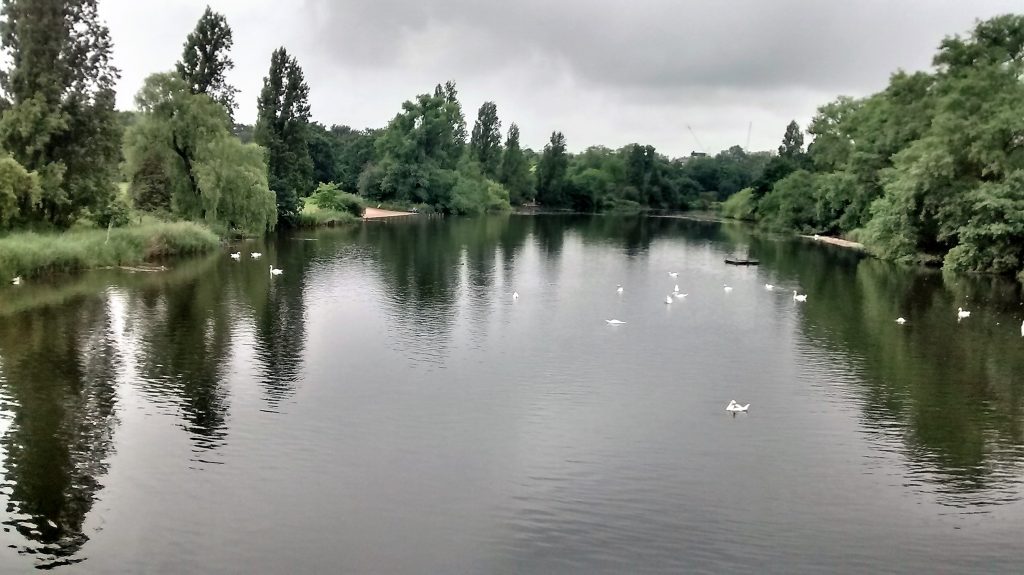 To Lancaster Gate tube station and cross the road to get into Kensington Gardens.  It’s still a bit chaotic here at this entrance as there’s a gang of men digging up the pavement and using their big Tonka toy machines to rearrange other parts of the shrubbery.  The work seems to be part of a scheme to set up a cycle superhighway running through the park but, whatever benefits this green initiative will eventually bestow, today it’s just causing all the rest of the traffic to grind to a halt.  And, as I discover, this snarl up continues for the whole of the winding route it takes me to get to the Serpentine Sackler Gallery, thus spoiling what is usually a rather attractive walk.  But it’s not just the fumes chugging out from all the idling cars that mars the atmosphere, the air is hot and oppressively humid, and overhead are glowering grey clouds that threaten to open up at any moment and give me a jolly good soaking.  Fortunately, I manage to reach the Gallery without this happening, so I’m feeling quite relieved when I enter the place and my mood brightens further as I’m immediately confronted by a great refreshing starburst of sunny delight colour, in the form of three large tapestries from the Lebanese-American artist Etel Adnan. 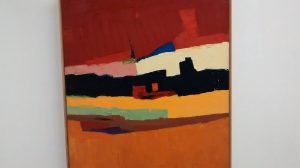 Taking a quick scan round the rooms here, I also experience a slight sense of déjà vu, as if I’ve already seen this exhibition before a couple of weeks ago at the Whitechapel Gallery.  In fact, it’s just one of those odd sorts of coincidences – at least I assume that’s what it is, I suppose it could be part of some devious feminist artworld conspiracy propaganda plot to somehow brainwash hapless male seekers after cultural enlightenment.  Anyway, whatever it is, both Galleries are currently showing retrospective exhibitions of bright, bold, colourful abstract paintings from women artists whose careers started off during the optimistic days of the early 1960s.  If you read the blog I wrote a couple of weeks ago then you may recall I was perhaps just a little bit snotty and dismissive towards Mary Heilmann’s show at the Whitechapel but, happily, I think I can be a little bit more positive about the display of Adnan’s work here at the Serpentine.  For one thing, the show is smaller, and that’s not meant to be a snarky, backhanded compliment.  Sometimes less really does add up to more and I think the layout of works here is definitely more successful that that at the Whitechapel.  Hung in broadly chronological order, the line of relatively small paintings that run round the Gallery’s perimeter walls provide a very reasonable overview of how the artist’s work developed during the course of her sixty year career.  There are also examples of her drawings – a mixture of inky abstracts and a sequence of realistic cityscape sketches that fill the pages of a series of concertina books.  It’s an attractive, compact display that makes it possible to have a good look at all of the works and get the picture, as it were, of what the artist was up to without becoming overwhelmed and bored by the obligatory feeling of having to stare at more and more examples of similar looking pictures just because they’re there – which is what happens at the Whitechapel.  At least, that’s what I feel, although maybe others are able to keep up their concentration for longer periods than I can manage these days. 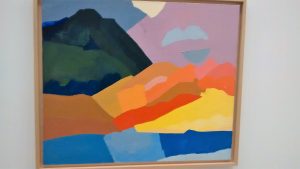 So, what are Adnan’s paintings actually like?  Well, the early works are composed of discrete concentrated shots of impasto colour that are given a sort of visual coherence by being built up into simplified structures suggesting buildings, rooms or cityscapes.  I think that the intention of the artist is perhaps to so construct these arrangements of colours and shapes that they convey a sort of impression of a place or maybe the ambience of a half-remembered occasion.  Or something like that.  Part of the problem of trying to write about any abstract art is that it’s hard to avoid lapsing into daft, random burbling, so let’s just say that I thought most of the paintings managed to achieve that sparky and attractive sense of composition that makes them pleasurable to look at.  At least, I thought that applied to most of the early works.  As time progresses, the shapes she’s manipulating become more focused and it becomes easier to pick out what look to be more obviously buildings and other specific landscape features and when this happens everything starts to look a lot less interesting. 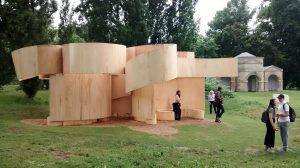 Puzzling over these later works that come towards the end of the show, I can feel my interest definitely starting to wane and rather than lingering around and trying to work out exactly why this should be the case, I decide instead to move on.  Heading back outside into the park, I get off the main path and go cross country, squelching through the mud and wet grass to get to the small 18th century stone building known as Queen Caroline’s Temple.  The point of trudging over to this rather elegant Neo-Classical pile is that it currently provides the backdrop for a set of other, contemporary Summer Houses.  These transient structures have been installed by four contemporary designers – Kunle Adeyemi, Barkow Leibinger, Yona Friedman and Asif Khan – under the auspices of the Serpentine Gallery’s outreach architecture programme.  And, as one would expect, the constructions of moulded plywood, polycarbonate panels, sandstone blocks and wire hoops are all rather chic, experimental, fun and, of course, totally impractical.  Evidently, the curators at the Serpentine, who organised this display, forgot to tell their proteges anything about the typical climatic conditions of an English summer, since only one of the structures actually has a roof.  I suppose that this rather basic design flaw is forgivable in the work of the relatively youthful designers, but less so from an established architectural practice like the Bjarke Ingels Group who were given the prestigious honour of installing this year’s Pavillion that now sits outside the original, main Serpentine Gallery.  Their giant curving wave of a building is solely composed of stacks of thin plastic blocks held together with paperclips or some other devilishly clever device.  It really looks quite magnificent but, and here’s the soggy rub, there’s no roof and the blocks are all open ended and hollow so there’s no barrier to stop the rain cascading in.  And, sadly, this has apparently happened with such frequency that the Harrods café, that should be the main central occupant and feature of the space, has had to be abandoned.  Which is a bit of a shame. 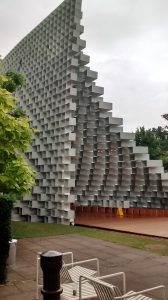 Finally, I take a look in the actual Serpentine Gallery which is offering an exhibition of recent paintings by Alex Katz.  These are a mix of landscapes, cityscape and especially portraits, all completed in the same loose, facile style that the artist has been using his entire long career.  I suppose there’s something impressive about a painter who, having developed a very distinctive personal style in his youthful twenties, can still carry on using it well into his eighties.  On the other hand, it’s possible to argue that the very fact that the artist has seemingly been so disinclined to bother indulging in any experimentation or made any attempts to develop his technique or broaden his choice of subject matter, merely confirms the narrowness of his outlook.  The paintings are flat and shallow, the anatomy clumsy, the faces little better than simple caricatures and when walking round the exhibition, the impact of all the imagery is little more stimulating than that achieved by aimlessly flicking through the pages of a glossy fashion magazine.  Then again, it’s just about equally as comforting so perhaps, after all, it’s not quite so surprising that the artist has been so very successful. 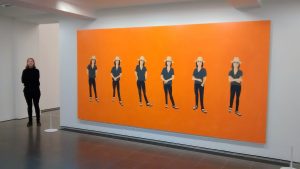