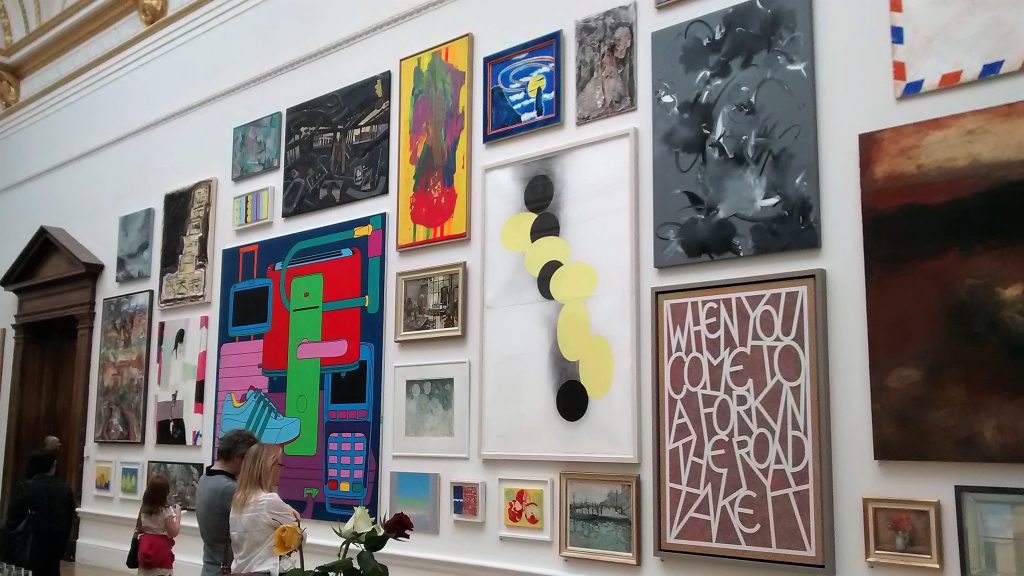 To Piccadilly tube station and then the short walk to get to the Royal Academy for their annual Summer Exhibition which this year has been coordinated by Richard Wilson, currently being billed as one of the Britain’s most renowned sculptors.  But if that creative industry job title automatically makes you think of someone bashing away at bits of marble, casting statues in bronze, or even bisecting sheep and submerging sharks in vats of formaldehyde, then maybe it’s not an entirely appropriate one.  While Wilson definitely creates objects in 3-D, his work tends to be on such a heroic scale, and requires the involvement of such deliberately complicated manufacturing processes and mechanical manoeuvres, that maybe he should be officially redesignated as some sort of crazed inventor-cum-civil engineer.  While 20:50, the walk-through tank of oil on permanent display at the Saatchi Gallery, is probably his most famous work; Hang On A Minute Lads, I’ve Got A Great Idea… which consists of a full-size coach pivoted on the roof of an office building in homage to the film The Italian Job, is perhaps his silliest; but by far his biggest to date is Slipstream, the 70 ton twist of aluminium that makes solid the turbulent airflow disturbances caused by the corkscrew aerial display flight of a Spitfire, and at a cost of £2.5m dramatically fills up 250 feet of Heathrow’s Terminal 2.  Comparatively smaller, but very much in keeping with Wilson’s heavy-handed, laboured and labour intensive sense of eccentricity, is Square the Block which is set on the corner of the London School of Economics building in High Holborn.  Parts of the exterior facade appear to have been ripped out, crunched up and very messily reset, looking to the uninitiated like an example of the most bizarre bit of botched building work possible, while those of us in the know walk past it unbaffled, safe in our knowledge that it’s just the sort of quirky kind of joke that defines the template for a good deal of what passes today for art of the more renowned kind. 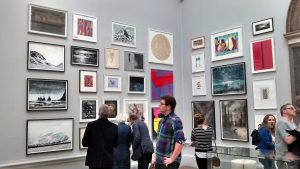 Whatever one thinks of Wilson’s creative endeavours, making his massive manic constructions has clearly required him to become a master in the art of logistical planning and as such probably makes him the ideal candidate to take control this year’s Summer Exhibition.  The show has been running continuously since the Academy was founded in 1768 and involves showing a mixture of work from Royal Academicians – artists who have been inducted into the institution by the common agreement of their peers – a few special invitees from oversees, plus those selected from open entry submissions.  Indeed, anyone can enter works for the show, although the odds of getting something accepted are not all that great and probably run at about ten-to-one against. 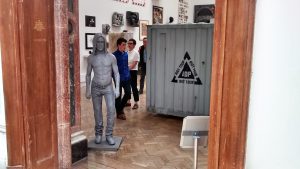 The result is an exhibition of about 1,200 paintings, prints and sculptures squeezed into a dozen rooms, representing a cross section of what the best of this country’s artists (plus a few of their invited friends from overseas) are producing today.  Well, sort of.  I suppose it would be a bit more accurate to say that the exhibition offers up the consensual view of what’s going on, as seen by a particular section of the Great British art establishment.  And, though not deliberate, I guess that the main controlling factor influencing this aesthetical view is one of age.  After all, artists don’t get elected to become Royal Academicians until they achieve a certain level of professional competence, which naturally takes a bit of time to acquire.  As a consequence, most Academicians are middle aged or more and since they’re responsible for about third of the works on display and, of course, picked all the rest of the stuff, it’s perfectly reasonable to assume their prejudices prevail and that the display is representative of the tastes of a bunch of fairly successful artists who are all probably the wrong side of fifty. 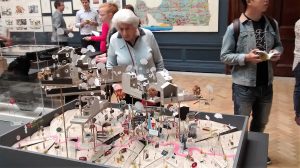 Since I now also fall into that demographic – at least, the age bit of it – I suppose it’s not too much of a surprise that I quite enjoyed wandering around the rooms here and found quite a lot of things that I quite liked.  That the show has nothing sensationally different, staggeringly great or stunningly awful probably results from the committee system for selecting non-Academician work and which inevitably has a tendency to settle for compromises and so sift out anything too peculiarly good or bad. 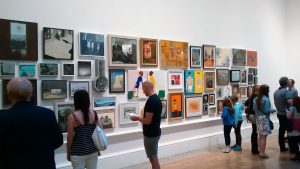 Of course, the very same reasons that make today’s show appeal to me, explain why, when I used to go to the Summer Shows thirty years ago, I found them all so tooth-grindingly boring.  Back then, if my memory serves me correctly, there used to be room after room of figurative paintings.  Most were competent creations and while there would always be a few that were either ferociously realistic or disingenuously naïve, the vast majority came from the large middle section of the bell curve of artistic technical prowess and were presented with a sort of casually determined Impressionistic verve.  Not only were the paintings stylistically very similar, the choice of subject matter would also be frighteningly narrow.  Basically, the artists would reveal a slightly idealised view of some part of their rather agreeable biography.  So, the audience would be treated to an insight into a mellow, middle class lifestyle composed of a kaleidoscope of different aspects of the happy homelife held therein, whether exemplified by the bowls of apples and grapes that were detailed in the still lifes; or the décor of the recently refurbished lounge that appeared in the interiors; or else the accommodating wifes and beautiful lovers who would be draped in various states of undress over the Heals’ furniture, all for the sake of the awkwardly staged portraits.  And if those scenes weren’t irritating enough to look at, then there were always pictures of the luxuriant gardens to admire; or the picturesque views through to the nearby landscape; or even sketches that showed where the lucky bunch of bohemians had holidayed that year. 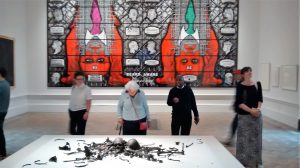 As a slight relief from this cacophony of colour supplement clichés there were usually a couple of flashy abstracts included in order to confirm the RA’s open-minded radicalism and allow some of the more mature members of the viewing public to engage in some cathartic tut-tutting at the outrageousness of such avant garde antics.  But one thing’s for sure, there was very seldom anything of interest that spoke to me of my less comfortable lifestyle, circumstances or concerns.  And I can’t help wondering whether today’s more youthful art enthusiasts would similarly look at the current show and cringe as I did back then, cursing it for being all too cosy, dull and irrelevant.  Oh well, doubtless they will get their turn in the years ahead and when that happens and they’re running the show, hopefully I’ll still be around to tut at their reflected vision of the world. 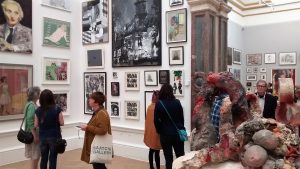 Anyway, enough of these meanderings, it’s time to highlight a few names and give out a few awards.  So, length of service tributes for consistency go to Gillian Ayres and her vibrant abstracts, Anthony Green and his quirky self-portraits, Allen Jones for his sexist Pop trivia and Elizabeth Blackadder for her pretty floral arrangement.  I’m pretty sure that all of these artists were exhibiting almost identical paintings and sculptures when I first visited an RA Summer Show three or four decades ago.  Citations for unpleasantness and ugliness and all round naughtiness go to Gilbert & George and their direct descendants, the Chapman Brothers.  A big raspberry for the worst painting in the exhibition goes to the comedian Harry Hill and his unfunny portrait of David Beckham.  Prizes for works of interest go to Sean Scully and Anselm Kiefer who both seem to be mellowing in their maturity, respectively by showing signs of an attractive loosening of brushwork and the introduction of spots of colour amongst the usual gray gloominess.  Everything else by all the other artists is all pretty good if perhaps all unexceptional so it just remains to congratulate Richard Wilson for co-ordinating the whole party and mention that, should you wish to acquire a copy of his Slipstream and don’t have the space for a full size version there is a small limited edition series of scale model that are just a few feet across on sale here today for just £26,400 each. 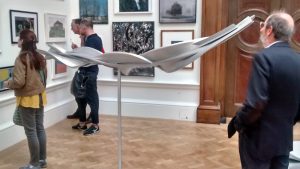 2 responses to “Middle Aged or More”