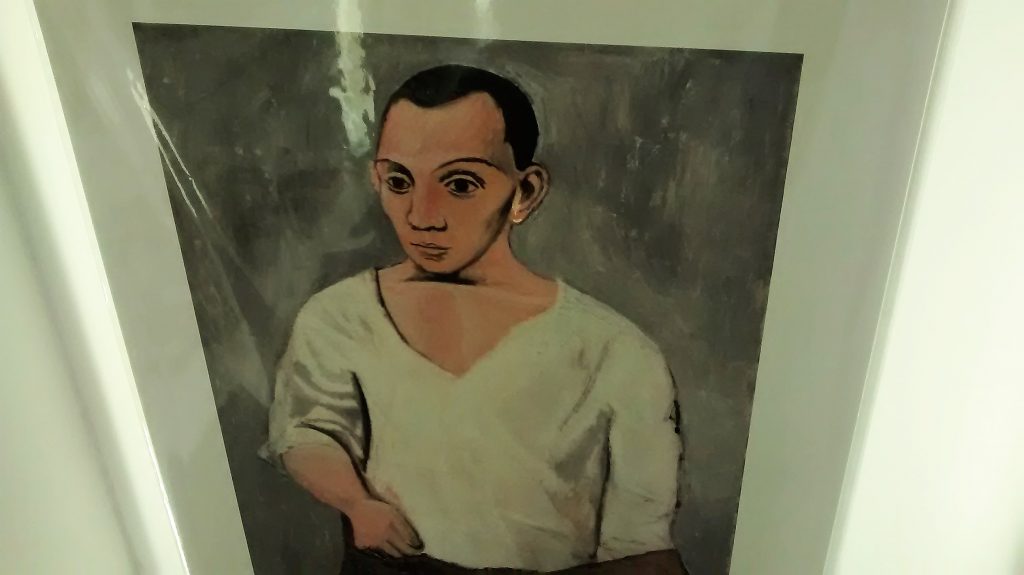 To Charing Cross tube station and a short walk to the National Portrait Gallery for the Picasso Portraits exhibition which, I have to say, I’m really rather looking forward to seeing.  I suppose, like most people who get interested in Modern Art, I’m quite a fan of the little Spanish genius who was so very prodigious and so very clever with the ways he played around with methods of representing the things he saw in his rapidly changing, modern 20th century world.  Of course, the problems in art that Picasso spent a lifetime investigating – finding new ways in which a 3-D reality could be reduced by a dimension yet still be convincingly replicated on the flat plane of a canvas or sheet of paper – are no longer considered to be of much concern to contemporary artists these days.  But then that’s in part because he did such a very thorough job of testing to near destruction all the different ways of showing how a face or feature could be twisted and turned, fractured, filetted and faceted and yet still retain sufficient integrity to be read as a fully formed character, scene or situation.  Indeed, there’s an argument for citing Picasso as the artist who brought the whole history of the Western figurative art tradition to its crashing, crescendo conclusion.  That he did so with such incredible imagination, panache and virtuosity, and created so many wonderful striking images along the way, has not only made it hard for anyone to follow in his figurative footsteps but also tended to make much of the Abstract and Conceptual art that has come after him look all a bit thin. 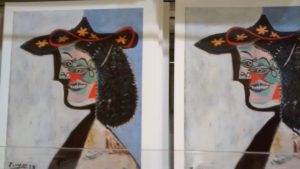 Anyway, enough of my general paean to Pablo, what about the specifics of the show here today?  Well, the Gallery has set up those little guide rails that they use to try to keep queues for the ticket desk regimented into an orderly procession and they’ve also initiated a timed-entry booking system, so I sort of assume that they are expecting the show to be one of those great big sell-out blockbuster shows – the kind of critical and commercial success that keeps happy both the front of house curatorial staff and the back office teams of accountants.  And presumably the thought that they’d come up with what would be one of those must-see shows, at least for the older Modernists like me that constitute a fair proportion of their cultural clientele, was what made them feel confident enough to make the full price entrance ticket a whopping £19!  Thankfully my Art Fund card and senior citizen status reduces this to a more bearable £7.75 but even at that subsidised rate I’m not sure I could really bring myself to recommend the exhibition as being very good value for money.  And while I’m not sure what any of the other hacks have written about the show (I always try to avoid reading other opinions until I’ve posted out my own) I think maybe word has already got out that while the exhibition is ok, it’s certainly can’t be considered as falling into the category of essential viewing.  Consequently, when I go along there are no queues and no need to wait for any special time slot, and while all the rooms are full of visitors, they’re certainly not cramped or crowded. 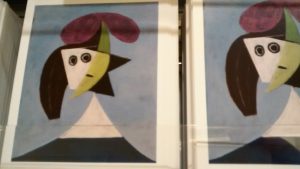 So, what’s the problem?  Well, there are definitely half a dozen really good portraits and self-portraits here, with the two large, classically inspired studies of first wife Olga probably being the most impressive.  But if the Gallery wants to charge a blockbuster price for admission then I think that the public is right to expect a proper, knock-out spectacular of a show.  What is required is a strong, interesting narrative explaining some central thesis or theory which is then illustrated by a comprehensive collection of lots of works covering lots of areas in detail, complemented by a string of special, rare or spectacular highlight, big ticket stunners.  And there’s just not much of that here.  Frankly, the show feels more like a quick introduction for dummies rather than any kind of a substantial survey for connoisseurs.  There is, for instance, just one example of an early Picasso Post-Impressionist painting; one Blue Period work, one example of an Analytical Cubism portrait, and two of his late period Expressionist curios.  Of course, all are interesting and wonderful – this is, after all, Picasso, who were talking about here – but there just aren’t enough.  And then, despite the broad chronological journey outlined by the show, that starts with some early cartoon sketches of his first exciting train ride into Paris and terminates with the final scribbled sketch of the artist’s face shrinking into a sadly grinning skull, the exhibition doesn’t really manage to flow very successfully.  It’s not just that the display is a little bit clunky and the selection of works a bit hit and miss – I get the feeling that the Gallery was probably just offered a bulk order discount deal that allowed them to do a sort of quick supermarket sweep around the store rooms of the Museu Picasso in Barcelona.  I think the main problem probably rests with the artist himself. 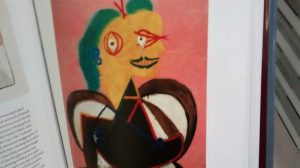 As already mentioned, the fact is that Picasso kept changing direction and was forever experimenting with different styles, media and formats and so placing these together in a relatively confined space makes for a very spiky display with no very obvious or comfortable track to his development.  And perhaps even more tricky, when it comes to staging an exhibition of his portraits, is that while the labels confirm that the paintings, drawings and sculptures are of specific friends, dealers, wife and lovers, Picasso was so self-centred, and self-obsessed, that it’s hard to believe that he was ever very interested in the inner thought or personalities of any of his sitters, let alone being very bothered about trying to represent them.  In other words, while he had a tremendous facility for sketching the external features that go in to making up an accurate representation of a person, I don’t think he cared very much about the potential that portraiture can have for revealing aspects of the inner self.  In fact, I think it’s probably fair to say that he only ever used his sitters as blank templates onto which he could trial variations of his multiplicity of stylistic painterly tricks, albeit overlaying them with a quick caricature identifying whoever it was who happened to be sat in front of him at the time.  Ultimately, I suppose you could call most of them a bit two-dimensional. 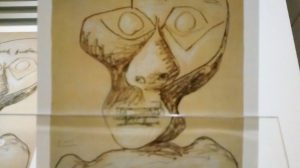 So, all in all, a bit of a disappointment and quite an expensive one at that.  But there’s always another show to go and see so off I head down Pall Mall to the new home of the Alan Cristea Gallery and its inaugural show of recent work by Howard Hodgkin.  I think the first time I remember getting a proper look at the artist’s work was about thirty years ago when he also provided the first exhibition that launched a newly revamped Whitechapel Art Gallery under the premiership of Nicholas Serota, prior to his elevation to the position of supremo of the great empire of the Tate.  Anyway, back then I remember thinking just how very beautiful and powerful were the small scale abstracts that Hodgkin seemed able to dash of with such carefully controlled spontaneity.  I use the term abstracts, as the mixture of blobs, squiggles and streaks of colour certainly look like they’re a sort of randomly evocative arrangement of shades and shapes but, I seem to recall, the artist himself has always considered his paintings to be some kind of figurative renditions of situation he’s encountered and subsequently wished to record.  And if I squint my eyes very hard when I look at his work I can usually just about go along with the idea that he’s trying to recreate some approximate representation of an actual scene, though doubtless suffused by a sense of the ambience of each momentous occasion.  Either way, the lusciousness that has characterised most of his paintings and prints has always looked rather considered and precise and I’ve always been quite happy to go along with his particular artistic constructional conceit. 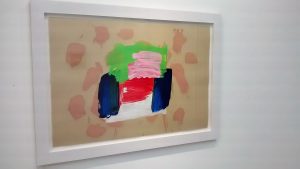 Anyway, when he showed at the Whitechapel all those years ago, Hodgkin was already an important and respected artist but now I think it’s fair to say that he’s probably achieved the status of grand old man, which means it’s time for the rest of us to consider how he is faring in this late phase of his illustrious career.  Well, some believe that the final Picassos with their coarse brushwork and crude content were a last, triumphant flowering of the old maestro’s talents just as many swooned at the portraits that the octogenarian Hockney recently plastered round the walls of the Royal Academy.  Me, I’m not so sure.  After years of dedicated practice artists have all the experience and knowledge of their trade but acting against them, weighing on the other side of the balance, is the natural deterioration in physical and mental skills with which all humanity must inevitably contend as time ticks on.  And so, just as I am no longer able to run the mile in under four minutes nor solve the Times crossword in under five, I fear that my eye-squinting muscles have degenerated to such an extent that I am no longer entirely able to convince myself that Hodgkin is currently doing anything much more than parodying his own earlier work and merely going through the motions as he applys his blobs, squiggles and streaks of colour. 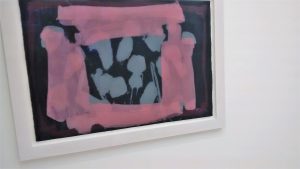