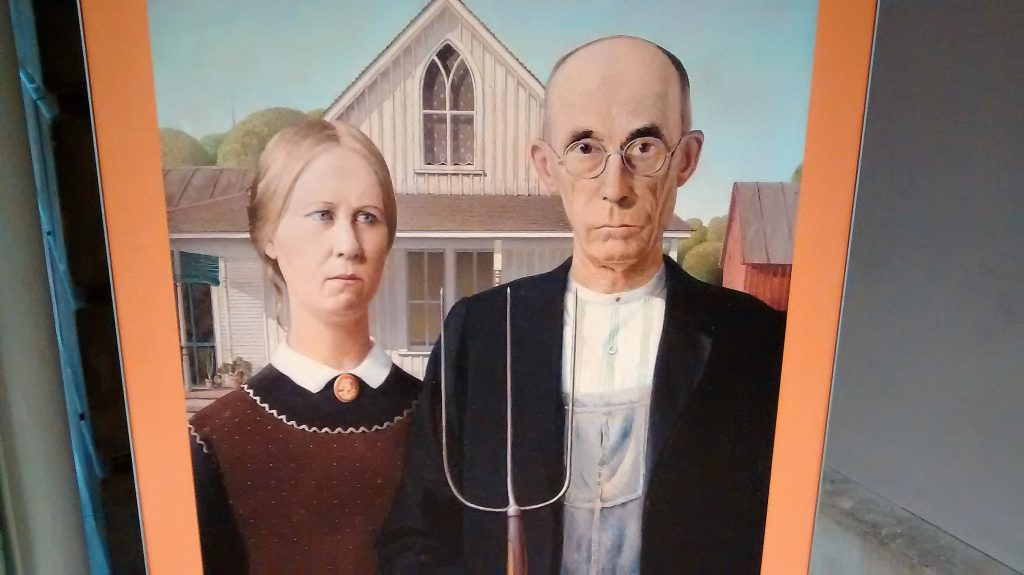 Back to Piccadilly tube station and on to the Royal Academy where I head up in the lift to get to the Sackler Wing for their latest show, America After the Fall – a more compact and slightly off-skew echo to the Revolution exhibition that opened a few weeks ago and is currently being held in the Academy’s main suite of galleries on the floor below.  Whereas that show reveals the response of Russian contemporary artists to the turbulent events of the period from 1917 to 1932, the upstairs exhibition is a mini-survey of the artistic developments that occurred across the Atlantic during the following decade:  roughly from around the time of the calamitous economic crisis sparked by the Wall Street crash of 1929 through to the start of the Second World War that America would finally get around to joining a couple of years later.  While this clearly wasn’t quite such a violently transformative era for the American public as it had been for the Russians, who had witnessed the execution of the Romanov Royal Family and the replacement of the Czarist autocracy with a communist dictatorship followed by a horrendous civil war, famine and the start of Stalin’s brutal authoritarian rule, even under Roosevelt’s benign presidency, times were still tough and testing for the majority of the populace.  As the accompanying guide helpfully points out in its chronological crib sheet, the period was marked by a long economic slump that resulted in widespread poverty, hunger marches and strikes as unemployment during the period reached a massive 25%.  Although, on the other hand, the decade also saw the birth of Mickey Mouse, the construction of the Empire State Building, the ending of Prohibition and the invention of the cheeseburger.  So, if not exactly the best of times and the worst of times, it was certainly among the most interesting times and an enormously destabilising and dramatic period of change. 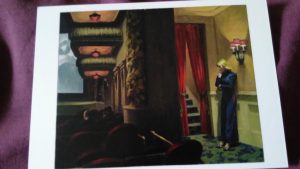 So, how did this effect the artists of the time and what was their creative response?  Well, the curators have managed to gather together a hundred or so paintings from around twenty or thirty artists and chopped them up into fairly arbitrary segments with titles like City Life, Country Life, Visions of Dystopia and Looking to the Future.  In other words, it’s one of those Forrest Gump kind of displays where life is presented as a box of chocolates and there’s a pretty randomised assortment, with a fair few soft, sweet centres, some gooey toffee chews and perhaps too many hard nut crunchers.  Or, to scrap the confectionery metaphors and revert to artistic terms, there are perhaps a handful of first-raters, one or two real duffers and most of the stuff sort of middling interesting, ok-ish and not bad.

I guess the best picture in the show is probably the one that’s rightly been selected to go with all the Academy’s marketing and promotional paraphernalia, from the banners outside the main building to the tube station posters and the press shot illustration that’s been chosen to accompany most of the newspaper and magazine reviews of the show.  And Grant Wood’s American Gothic, with its portrait of a pair of puritan, salt-of-the-earth farmers standing rock-steady in front of their homestead and staring, unblinking straight back out of the canvas, is one of the truly iconic images of the time.  Perhaps what makes the picture so compelling is that it presents the kind of understated ambiguity that encourages the viewer to keep looking into the character’s eyes to try to decode their expressions, read their minds and so determine exactly what they think of the actuality of their own situation and circumstances, and also what they think about us.  In fact, it was Wood’s neighbour, a dentist, who modelled for the main character and apparently the pitchfork he holds in front of him was just a stage prop and an implement long out of fashion at the time represented in the painting.  So, an early example of fake news I guess, but perhaps one that’s allowed under the conventions of artistic license.  As for Wood’s other portrait in the exhibition, Daughters of Revolution is a far less accomplished and subtle construction and verges on caricature which, for me, pushes Wood into the category of a one-hit wonder – though better that than no hits at all. 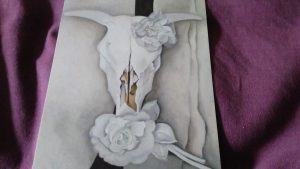 As for the other good stuff here, there are no real surprises and it’s the more familiar names like Edward Hopper and Georgia O’Keeffe who, unsurprisingly, come out looking like the stars.  Neither, it must be said, are very technically talented artists but then what they both lack in painterly proficiency they make up for by their idiosyncratic choice of subject matter.  Hopper captures simple scenes of everyday mundane life – a desolate country gas station; an usherette in a gloomy cinema – and transforms them into what look like eerie, mysterious publicity stills for an edgy film noir thriller.  While O’Keeffe’s bleached white cow skull with roseate adornments looks like the perfect obscure Surrealist trophy dredged up from the dream of an ancient rancher to symbolise a backstory of hardship and desperate loneliness.  Having seen retrospectives of both artists in recent years I think it’s fair to say that each of them benefits massively by being included in a mixed exhibition like this one where there’s only room to show just one or two examples of their works.  Seeing their paintings in bulk not only highlights the limitations of their technical abilities but also reveals the comparatively small pool of subjects and emotional experiences from which they drew their respective inspiration and then continuously reworked, making the results really just a bit dull by their continuous repetition.

Fortunately, for both of them today it’s a case of less meaning more and they are further helped by being surrounded by so much work that, if not exactly second rate, is – let’s be generous and say – mildly interesting if generally unexceptional.  Of course, the curators can be forgiven for being unable to present a sequential succession of masterpieces and a

show of unalloyed marvelousness since the aim of the display isn’t to reveal the best of 20th Century American art but to cast a light on a precise and generally undervisited period of time.  And the simple fact is that the specific segment of American art history covered by the exhibition is not one famed for exceptional artistic creativity and originality.  Much of the work looks like thinnish imitations of earlier European styles so that Paul Cadmus’ gang of rowdy sailors out on leave seems to reference the Expressionist jauntiness of a Beckmann parade while Morris Kantor’s Haunted House approaches the intimacy of a Vuillard interior, and Helen Lundeberg nods towards Magritte’s form of Surrealism while Ilya Bolotowski seems to have been looking over Miro’s shoulder.  Although, placing these American artists in such close association with their European counterparts is perhaps flattering their talents and awarding them honours by association that I’m not sure that they really deserve. 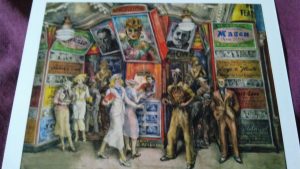 Where the exhibition does perhaps reveal something new and interesting in more general terms is that there’s a hint of a common direction towards a putative emergent national style.  And that arises because of the tendency among quite a few of the artists here to paint in variations of a distinctive flat, occasionally cartoonish style.  It’s hard to know whether this is always deliberate or just the individual artists attempt to mask a natural lack of facility for using paints.  Nevertheless, the resulting stylised images are frequently reminiscent of theatre set backdrops or, more intriguingly, the visual shorthand sometimes used by commercial artists for their advertising layouts.  Stuart Davis epitomises this trope most clearly but it’s also apparent in the Harlem street scenes of William H Johnson, Thomas Hart Benton’s Cotton Pickers, Doris Lee’s Happy Thanksgiving and a couple of the Grant Wood’s landscapes.  And, who knows, maybe it’s just about possible to imagine that had the Second World War not intervened and interrupted the natural artistic evolutionary processes, a form of Pop Art might have arrived a full twenty years before it eventually did in the real time world.

As it is, the exhibition does include a small section of abstract works that contain within them the first indications of what was to come along when the War was over.  Although, the single Jackson Pollock painting in the show still has him wrestling with the kind of representational games playing that Picasso initiated some decades earlier and is still on the small, domestic scale appropriate to the austerity of the period.  Of course, a few years later the American economy would be booming again, and the exuberant supersize canvases of the Abstractionists would become the standard style of the nation’s artistic expression.  As a consequence, the majority of the art and artists in this current exhibition would find themselves swept off the main stage and into the gallery shadows and storerooms which, I can’t help thinking is, in fact, probably where most of them are best suited to remain. 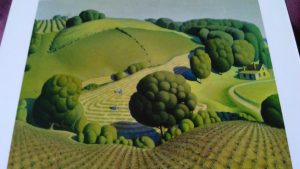