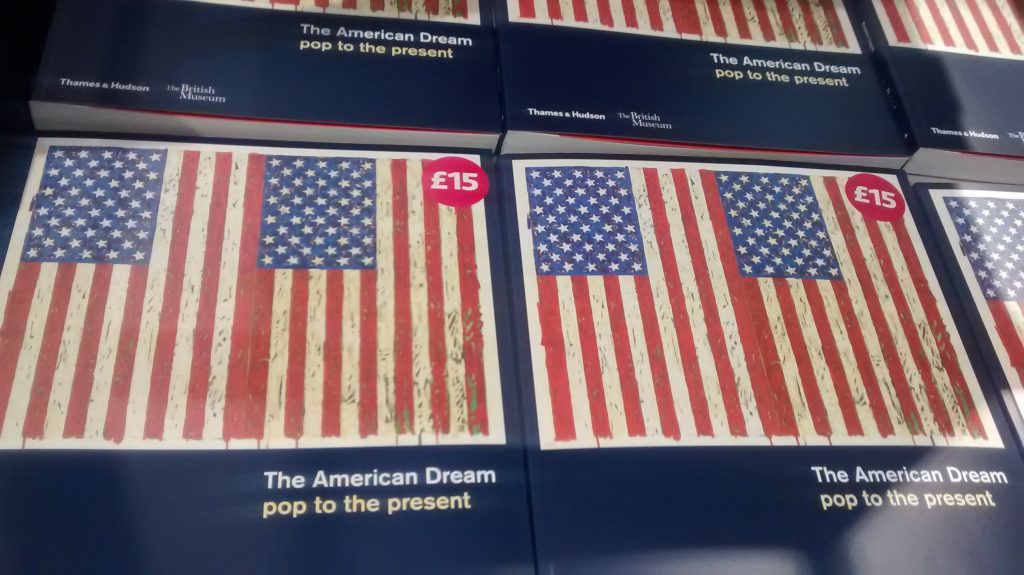 To Tottenham Court Road tube station and pleased to see that the Paolozzi mosaics are looking especially fresh and sparkling. I guess that someone must be getting out the Brillo pads and Flash and giving them a good scrub and polish and I wonder if maybe the Whitechapel Gallery have loaned TFL a couple of their young interns to help with the weekly clean.  After all, it would be good work experience for any eager arty youngster and would probably count as a kind of conservation training, especially as one of the original designs for the platform murals is currently included in the big Paolozzi retrospective that’s now on show in the Gallery.  Not that I expect the new tidy regime will last very long.  I feel sure that normal service will be resumed as soon as possible, thus ensuring a gradual return to the more familiar Underground house style of grubby dilapidation.  Although, to be fair, there does seem to be quite a wide variation in the general standards of cleanliness amongst the different tube stations – something I ponder while riding the escalator up into the real world before heading down the road and round the corner en route for the British Museum. 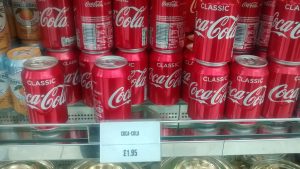 Approaching the great repository of cultural clutter from all the mighty civilisations of the past, I can’t help noticing that the air smells a bit more pleasant than usual.  While I can still detect the not so subtle notes of diesel particulates and various noxious oxides of nitrogen, there’s something missing from the usual urban bouquet that emanates from this particular corner of the capital.  And then it strikes me – the dreaded sentinel who usually stands just outside the Museum entrance is absent.  Evidently the street vendor who’s usually sited at this lucrative pitch has taken the morning off and so, for once, my nostrils are to be spared a battering from the awful sickly sweet stench that usually percolates above his heated cauldron of peanuts as they slowly roast in their awful caramel sauce. 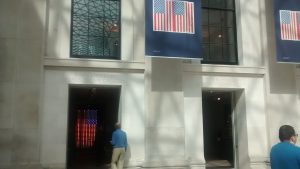 Next stop is the Museum’s new security tent and again I manage to pass unmolested.  Presumably their sophisticated profiling systems have correctly pigeon-holed me as one of the grey and grumpy and therefore a low level threat – someone who may occasionally mutter a few sarcastic asides, fire off the occasional vituperative letter of complaint and post endless ranting and rambling blogs, but is unlikely to take an iconoclastic hammer to the granite statues or otherwise desecrate any of the myriad glass cases and the assorted knick-knacks, geegaws and do-dads contained therein. 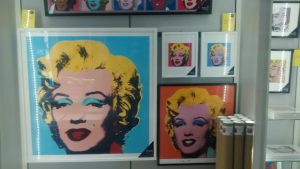 Anyway, the reason for today’s visit is to take a look at the Museum’s big new print show that I saw that odd Gompertz man plugging on the BBC the other week.  So I veer left through the central concourse and steam on past the shop and café with the most expensive coke in London.  Just beyond is the secret hidden lift that whisks the initiated straight up to the fifth floor Print Room, conveniently avoiding the long clamber up the stairs and all the shoving needed to get through the other galleries, packed as they always are with rowdy scrums of noisy tourists.  But then I notice there are special signs pointing me in a different direction.  It turns out that I’ve got the wrong end of the stick and that the show isn’t one of the Museum’s usual, serious academic displays with extra-long explanatory labels and arcane footnotes, and that usually gets hidden away in the upstairs attic display space.  No, this time the Museum has decided to glam up the presentation, charge a big entry fee (£16.50) and tempt the crowds in to what purports to be a full-on blockbuster show.  Hence, they’ve got the builders in to fix up some special temporary paneling and construct a sort of a winding maze of a dozen small rooms.  Then they’ve bulked out the usual display of works from the permanent collection with items borrowed from a bunch of other galleries and tacked on a couple of documentary video displays complete with groovy background music.  Most important of all, they’ve also added a large retail unit selling a wide range of souvenir prints, bags, jewelry stationery and other essential commemorative exhibition souvenirs. 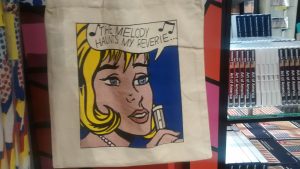 Oh well, I don’t want to risk upsetting my special security rating so I’ll halt the sarcastic asides and get back to the proper art blog critique.  So, what’s the show all about?  Well, it’s been given one of those wonderful, all-purpose meaningless titles:  The American Dream, followed by a curiously lower-case subtitle:  pop to the present, which does at least suggest a specific chronological timespan, though it’s only in the accompanying promo leaflet that mention is finally made of the show being a print exhibition.  Even then, all it says is that, ‘…American artists have produced prints unprecedented in their scale and ambition’ which sounds like a bit of genralised waffle to me.  Frankly, I find it a bit hard to believe that the genesis of this particular exhibition rests with some curator coming up with a special new thesis about how the medium of printmaking affected the development of American art, and it was felt that such a fascinating theory deserved to be tested by way of a series of illustrative displays that would draw upon examples from the Museum’s permanent collection.  Much more likely seems my earlier more cynical suggestion that here’s a case of curatorial opportunism and that someone thought they could repackage a bunch of works normally held in storage, pad them out with a few loans and then, with a bit of a promotional push, manage to drum up enough interest to create a show that would warrant an entry charge at the start and provide a financially useful retail opportunity at the end. 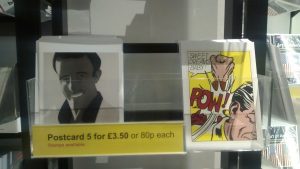 All of which perhaps explains why the exhibition comes across as a slightly confused affair and definitely doesn’t seem to be shaped by the normal academic rigour that accompanies the more typical displays organised by the Museum’s proper print department.  Nevertheless, leaving all that grumbling and nitpicking aside, the show starts well enough with a big splash of ten juicy Warhol Marilyns and eleven of his only slightly more somber electric chairs, followed by a reasonable selection of works from the other big American Pop Artists – James Rosenquist, Claes Oldenburg and Roy Lichtenstein, although perhaps only the latter of these was particularly interested in making use of the print format rather than their preferred medium of painting or sculpture.  Curiously the exhibition then seems to ignore the logic of its subtitle and decides to go backwards in time, first with a display of works by two of Pop’s progenitors – Robert Rauschenberg and Jasper Johns – and then with a brief detour around even earlier works by Robert Motherwell, Willem de Kooning and some of the other Abstract Expressionists.  There are some good things to see in all this, especially the Johns which comprehensively covers all his most favoured motifs – the letters, flags, numbers, targets, maps – but then no mention is made of the flatness of his choice of subject matter and how it related to the essential two-dimensionality of the work of the earlier Abstractionists.  And again, I’m not sure that printmaking was a crucial practice for any of those macho Abstract guys who I tend to think got most of their artistic kicks from the physical act of splashing on great brushfulls of paint and smearing them about. 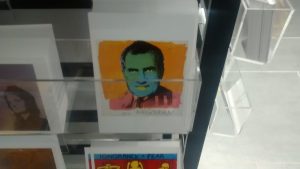 No matter, the exhibition then returns to something like chronological consistency with a section covering Minimalism with a small but select display of works showing the geometric simplicities of Brice Marden, Sol LeWitt and Donald Judd.  But then, after sections on Conceptualism and Photo-Realism are announced, presumably for the sake of being able to cover all the relevant Modernist isms, only very few actual examples of work from artists of either category are on display.  It’s as if the curators got a bit bored with the whole taxonomic idea or else simply ran out of the cash required to hire the works of art they were hoping to get as their stylistic exemplars.  In either case, the attempt at showing a chronology of styles or movements just seems to peter out in a sort of unwitting, unannounced Post-Modern collapse.  As a result, the curators make the switch to categorising their display sections by way of broad themes such as political protest, gender and identity.  So, Warhol makes a return to mock poor Tricky Dickie Nixon, with a portrait of the president looking particularly creepy, and Jim Dine gives both LBJ and Mao bizarre drag makeovers before things become a whole lot more serious with one of Keith Haring’s iconic cartoon ads promoting Aids awareness.  Although whether this, along with the Guerrilla Girls ironic poster explaining the benefits of being a woman artist, is art or agit-prop perhaps opens up a whole different kind of debate. 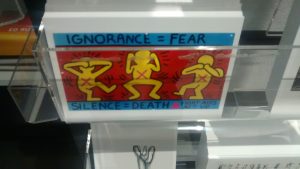 If the show’s opening reference to the American Dream was by way of Pop Art’s celebration of the sexy, seductive delights of the cornucopia of new consumer durables that appeared in the ‘60s, then the reverie comes to an abrupt end in the final room with the dawning of a scary new millennial world full of the dangerous disruptions of globalism, international terrorism and huge economic uncertainty.  At least, that’s the hugely pessimistic narrative proposed by the exhibition, as per the explanatory wall panel in the closing room.  Had the exhibition been staged a few years earlier I wonder whether the curators would have been extolling the exciting potential of an interlinked internet future and the transformative possibilities of social media interactions, ending on a high note with that famous Obama poster and its hopeful, audacious Yes We Can slogan.  As it is, I guess no-one could find any artistic image of a triumphant Trump proclaiming his intention to Make America Great Again. 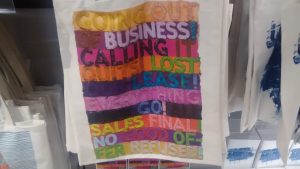