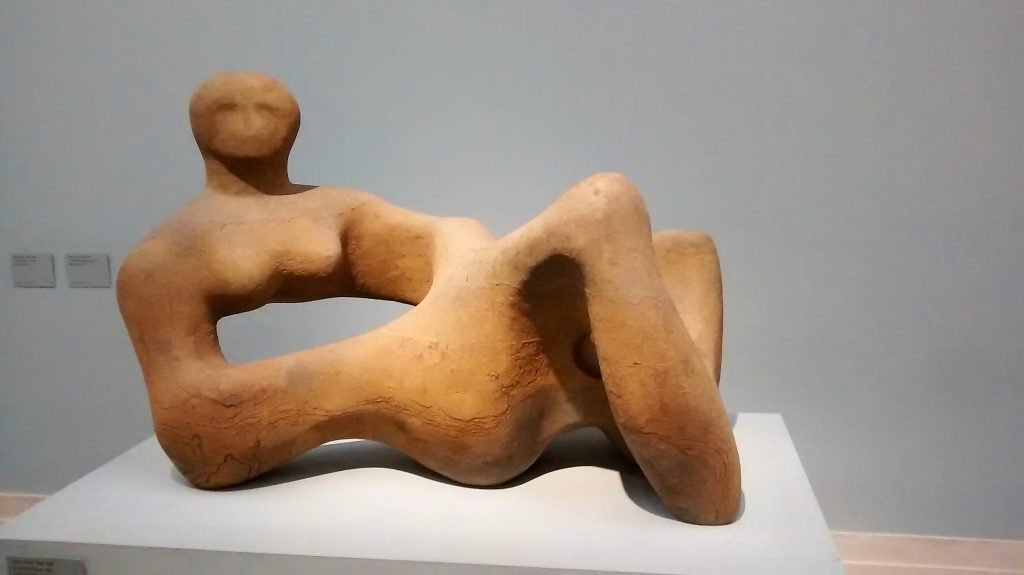 Back down to Pimlico and round to Tate Britain to take a look at the Wolfgang Tillmans exhibition.  I suppose I’ve bumped into the work of the German photographer a few times over the years since he first came to prominence after winning the 2000 Turner Prize and I have to say that I’ve never really understood or much appreciated his art.  At least, I think what he does is sort of meant to be art of the Conceptual kind, rather than any particular branch of photography, although that then does raise the question as to what exactly is the main concept at the heart of his work and from which his photographic practice then follows.  For he definitely takes photographs – that’s certainly the main medium in which he works –  it’s just that they don’t seem to fit into the usual categories of reportage, portraiture, fashion, documentation or any of the other more familiar genres.  Instead they seem to be a bit of a willful, random combination of all of the above padded out with a few abstracts, adverts and amateur snapshots. 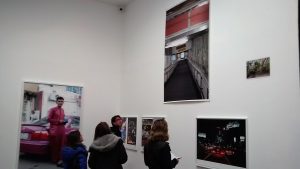 As far as I’ve ever been able to work it out, Tillmans’ main idea has always seemed to be just to point his camera in any direction and randomly click the shutter then move on and repeat until he’s accumulated an assortment of various different unconnected images which he then jumbles up together in a display referred to as an installation.  It reminds me a bit of one of those silly Mornington Crescent type games where someone says a word and the next person must come in with a follow-up word that has absolutely no connection with the first one.  It’s the kind of thing a particularly obdurate analysand might try to do to frustrate the free association games-playing of a Freudian analyst – and doubtless destined to fail as everything is, after all, ultimately connected to everything else in the great collective consciousness of the…er, hang on a minute, I think I may have unintentionally started drifting into Jungian analytics.  Oh well, let’s just say that the subconscious is a mysterious entity with a mind of its own and after wandering around for a while looking out for signpost to direct me to the Tillmans show, I realise that today mine has let me down and managed to bring me along to Tate Britain when I should be down the river over at Tate Modern. 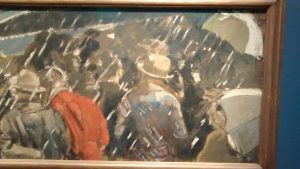 It’s a silly, simple mistake to make or maybe my subconscious knew that I probably didn’t really want to see the Tillmans anyway and thought it would come up with a better idea.  And maybe it has for, during the course of my meanderings, I come across a really rather interesting display of works from Walter Sickert, another German Anglophile, albeit one from a rather earlier generation.  Curiously enough, this particular small display of around a dozen or so works come from the end of the artists career when, instead of painting directly from life, he chose to reproduce images culled from photographs.  Sometimes this seems to have been done for logistical reasons as, for instance, when he wanted to paint the face of an Old Testament patriarch and didn’t have a suitable bearded model to hand, so simply put on a glowering expression and got his wife to snap his portrait in the guise of A Servant of Abraham.  Then again, on other occasions, it seems that he would be scanning through some newspaper or magazine when a press photo would catch his eye and he’d subsequently scale it up like a mural and reproduce it on canvas, adding in the colours as he thought appropriate.  I think it’s fair to say that the results of this process are mixed.  Miss Earhart’s Arrival, is a bit of an odd composition since the heroine of the story – the first aviatrix to fly solo across the Atlantic – is almost totally hidden from view by the crowds of well-wishers gathered to celebrate her formidable flying feat.  The portrait of Peggy Ashcroft holidaying in Venice is also a bit quirky due to Sickert’s odd choice of colour scheme with the black and white of the original Radio Times picture being replaced by a perhaps too striking combination of lime green and pink.  Much more successful are the three portraits of the Martin family and especially Sir Keith in a crumpled brown suit sat in an armchair and, though very loosely sketched, nevertheless managing to look as solid as the marble fireplace that stands behind him. 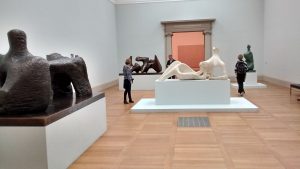 I think the Tate must have had a recent rehang of its permanent collection for, shortly after moving on from the Sickert display, I then come across another couple of rooms devoted to Henry Moore, that I don’t remember seeing before.  And again the curation is just right – sensible, straightforward and unflashy – providing a neat and attractive introduction to Britain’s most celebrated sculptor.  So, there are examples from different phases of his long and esteemed career showing how he abstracted and reworked classical figurative poses to make them suitable for the new Modern world.  The first room with smaller pieces, maquettes and drawings leads on to a suite of much larger, more monumental constructions that start to connect the figures with a sort of generalised view of the landscape which, I suppose, is really where they should be best sited for maximum effect.  Although it’s still good to see a group of them corralled together here. 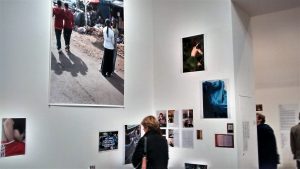 Despite the temptation to linger amongst the Mooreish attractions I feel obliged to override my subconscious and so get a bus and tube and walk on over to Tate Modern and then up the escalators to finally get to the Tillmans show.  And despite the prejudices expressed earlier, I enter the exhibition with what I hope is an open mind ready to be won over and convinced that the artist’s displays are not just meaningless selections of any old images thrown haphazardly together and fallaciously labelled as art.  Unfortunately, the first room contains some cars racing along at night, an urban underpass, some foliage, static on a TV screen, a collage with some water bottles and on and on and on.  Frankly, none of the individual pictures look s anything other than mundane and I just can’t see what was the logic behind grouping them all together and, for me at least, the total is exactly the same as the sum of the boring individual parts.  A quick read of the accompanying exhibition guide offers little help.  ‘Each room in the exhibition has been specially configured by Tillmans as a personal response to the present moment.  Ever conscious of his role as an artist, his work engages us with themes of community and sociability, empathy and vulnerability.’  At which point I give up and walk quickly through the other thirteen rooms utterly baffled as to the appeal of the artist and more convinced than ever that I’m never going to understand his appeal.  Maybe it’s a generational thing and someone like me who’s grown up appreciating the logic of a world described by Sickert, Moore and the like are just too old and slow to be able to retune to the Post-Modern diet that energises today’s children with its Youtube trivia, fake news and social networking instagramology 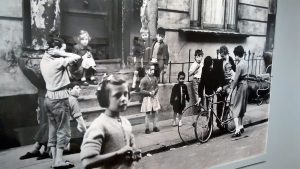 Anyway, for the sake of continuing today’s theme I exit the Tate, walk down to Waterloo and then tube up to Oxford Circus and on to the Photographers’ Gallery.  If, exercising extreme critical generosity, Tillmans might be said to be making sketchy, summary portraits of the post-millennial world then Roger Mayne perfectly nails down that black and white moment when the 1950s were tipping over into the 1960s and yet no-one had any idea that everything was about to change utterly and forever for the better.  It’s a world of crumbling Victorian terraces and scruffy kids playing on bombsites; of old men in flat caps and young women in headscarfs; and tough looking Mods and their dancing partners in polka dot dresses.  And not a Beatle in sight. 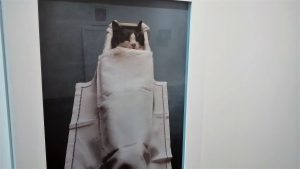 Another couple of floors of the Gallery are taken up with work from the four finalists in this year’s Deutsche Borse competition and maybe it’s not really fair to try to summarise what they do in just a couple of sentences.  But, since I wasn’t really very impressed by any of the stuff on show, I’ll simply say that Sophie Calle presents a sort of memorial to her late parents and her cat by placing short elegiac texts next to relevant pictures; Awoiska van der Molen shows dark, deeply textured shots of flora from unidentified landscapes; Dana Lixenberg documents cool dudes from poor neighbourhoods in Los Angeles; and Taiyo Onorato & Nico Krebs run slideshows charting their road trip from Switzerland to Mongolia. 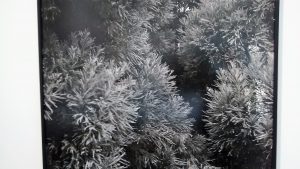 None of these pictures has half the wit and style revealed in the small, basement display of early works by Martin Parr.  Before he became famous for taking what some see as rather snide documentary shots mocking the general lack of style and taste of the white British working class, Parr set out to emulate Cartier Bresson and capture silly exquisite moments of everyday surreal juxtaposition – a pensioner having a cup of tea and a cake seated directly underneath a garish reproduction of the Last Supper; a couple of farmers deep in conversation and oblivious to the fact that their sheep are all lined up and looking in the other direction; a couple fallen asleep amidst serried ranks of empty deckchairs; and other such absurdities.  They all look just great and I think it’s rather a shame he didn’t stick to making more. 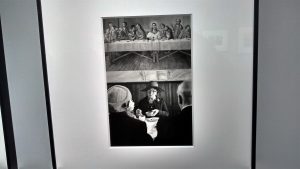