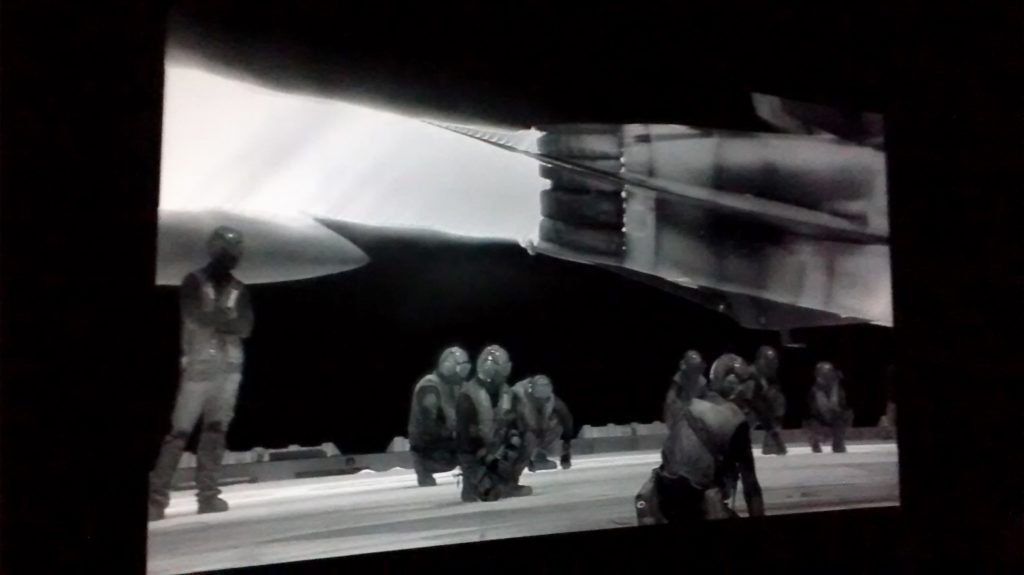 Head off to the Barbican which, I suppose, is a sort of umbrella name that covers not just the underground stop, where I detrain, but the upmarket housing estate, through which I then need to traverse, and also the famously labyrinthine cultural centre, whose art gallery I’ve come to look around today.  Sadly, the Barbican rubric carries with it a bit of soulless aura and though the distance separating tube station terminal from art displays on Gallery walls is relatively short, it’s also quite exceptionally grim terrain.  And while the high rise apartments that tower above the walkways here are apparently hugely expensive and highly sort-after, I’ve always thought that their dun-coloured exteriors and uncompromisingly brutalist designs were a dreadfully depressing, if somehow horribly appropriate, preparation for the experience of then entering into the dark and dismally confusing construction that is the actual Barbican Centre itself. 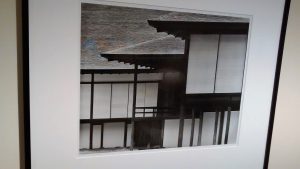 Presumably everything looked very different and much more appealing in the original isometric drawings and accompanying Lilliputian wooden models that the architects and planners used when pitching their schemes and dreams to the Corporation of London clients who were going to end up paying for it all to be built.  And I can’t help thinking that the most successful architectural practices are not necessarily those headed by individuals with the greatest ability for creating beautiful innovatory structures, solving complex design problems and resolving multitudinous complex competing logistical requirements.  No, I think the prizewinners in this particular construction game must be those who can paint the prettiest word pictures, spin the sharpest stories and best convince their potential patrons that, with the input of sufficient quantities of cash, a handful of sketches really can direct the transformation of thousands of tons of concrete and multiple miles of glass, wire, bricks and paint into an idyllic confection of wonderfully metered and perfectly rhyming poetry of the frozen kind. 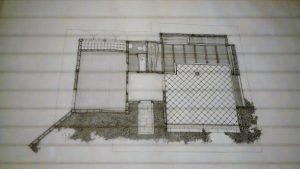 All of which is my clumsy cantankerous prelude to a consideration of the latest Barbican Art Gallery exhibition – a look at the development of house building in Japan since the end of the Second World War.  I’m sure I can’t be alone in thinking that this is perhaps a slightly arcane subject and wonder how on earth it got through all the curatorial committee meetings prior to its distillation into the full, two-floor exhibition format now on offer.  And I get the distinct feeling that this may well be a case of the sponsor’s tail wagging the curatorial dog.  So that rather than some enthusiastic academic or cultural historian wishing to mount a didactic exhibition in order to illustrate their important new theories and then managing to convince the Barbican authorities that it would also make a fascinating and engaging exhibition with wide appeal to an intellectually curious audience, I think maybe some eager architectural developers from Japan must have noticed all the construction work currently going on in London and thought they would like to get a piece of the building boom action.  And what better way to introduce oneself to the powerful and hugely influential Corporation than to help stage a show at their Barbican HQ? 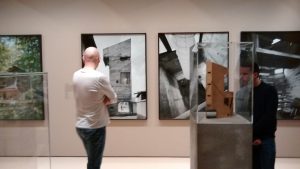 But, regardless of its origins, and despite being saddled with a terribly boring title – The Japanese House:  Architecture and Life after 1945 – the resulting exhibition is actually quite an interesting display with dozens of photographs, plans, models and assorted film clips to look at, and the full-scale reconstruction of an actual house, tea-house and garden to wander round.  And, fortunately, there is also a stack of labels and explanatory panels to help guide the lay person who, like me would admit to having only just a passing general interest in architecture and a decidedly sketchy knowledge of post-war Japanese history.  So, what did I learn from the show?  Well, as far as I can tell, the central theory behind the production is that a close consideration of the changing construction of Japanese urban housing projects reveals that the underlying designs are a sort of metaphor, mirroring a similar sequence of contemporaneous societal and cultural changes. 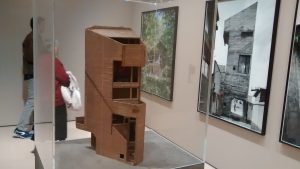 Consequently, the starting point for the exhibition is a sort of terrible tabula rasa resulting from much of the country having been reduced to rubble and dust following the relentless American air bombardments that followed as reprisals for the infamous Pearl Harbour attack.  This then led to the need for a massive and urgent rebuilding programme which inevitably helped push Japan away from its reverence for using traditional techniques and designs of the past and into the forced embrace of a kind of sparse European Modernism.  But while concrete replaced wood as the preferred building block material, the resulting houses managed, rather remarkably, to retain a solidly individualised look rather than becoming amalgamated into the dreadful tower blocks that blighted so much of Britain during the equivalent post-war era. 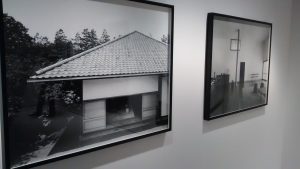 The subsequent story then follows the path of Japan’s economic performance – crudely summarised as years of steady growth finally inflating into a fateful bubble and then collapsing into a long period of stagnation, albeit one marked with a fairly comfortable standard of living for most of the population.  Along with these mercenary machinations, Japan also, like the rest of the developed world, found it had to adjust to the changing social mores with the rise of feminism, the decay of the nuclear family and all the other mix of pros and cons resulting from an increasingly interlinked globalised globe of a world.  And so alongside all these material and metaphysical movements come the accompanying shifts in architectural ideas and practices.  At least, as I’ve already mentioned, that’s the theory.  Except, I confess that I had great difficulty in seeing much change in the actual architecture.  From the very first photograph of a room at the start of the show to the final pretty aluminium model at the end, everything looked remarkably similar and consistent to me. 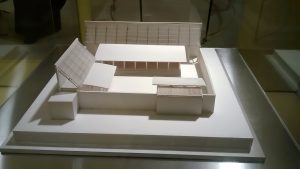 Now, I’m more than happy to concede that maybe I wasn’t paying close enough attention when I was wandering round the show and that important stylistic subtleties and decorative nuances probably skied well above my head.  But, as far as I could tell, every building, every room and every wall and every vista – exterior and interior – seemed to echo the same very similar cool aesthetic.  So all is neat, clean, compact, undecorated and understated and, frankly, nowhere looks very inhabited, living or lived in.  And I think the architectural archives, as represented in the exhibition, are perhaps just as mythological as the architectural plans whose integrity I questioned half a dozen paragraphs ago at the start of the blog. 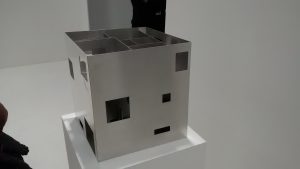 In short, I suppose I feel that I’ve been told a hugely convincing story about Japanese architectural history but I’m still not at all sure that it’s true or that someone else might not have told an entirely different one that might have been just as precisely plausible.  Then again, in our Post-Modern world most of us have probably become accustomed to competing narratives and are surprised that each separate outlet of the mainstream media seems to still be trying to assure its partisan followers that it alone has the monopoly of subjective truth while each of its competitors is happy to offer their own fake variations.

Which perhaps leads on rather neatly – or awkwardly, according to one’s point of view –  to the more obviously polemical exhibition currently on show in the Barbican’s ground floor gallery, the spacious corridor quadrant known simply as the Curve.  This has been given over to the documentary photographer Richard Mosse who presents what is described as his immersive multi-channel video installation.  And it’s certainly a quite spectacular array of screens and scenes that he’s used to depict what has become a very familiar and highly discomforting news story in recent years – the terrible, perilous journey undertaken by multitudinous refugees making their way into mainland Europe.  But rather than focusing in on any specific individuals and allowing them to relate their personal stories of trials and tribulations which, I suppose, is the traditional method whereby reporters attempt to elicit empathetic responses from their audiences, Mosse takes a very different stand.  In fact, he withdraws to a distance of several kilometres away from the landing grounds and then uses an incredibly sophisticated spy camera fitted with some kind of night vision lenses to record pin sharp imagery of the poor huddled masses.  In the three-screen video section, these pictures are then intercut with other scenes showing US military personnel on an aircraft carrier loading up a plane with hefty looking artillery shells.  Needless to say, Take My Breath Away is not playing on the soundtrack. 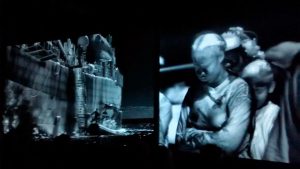