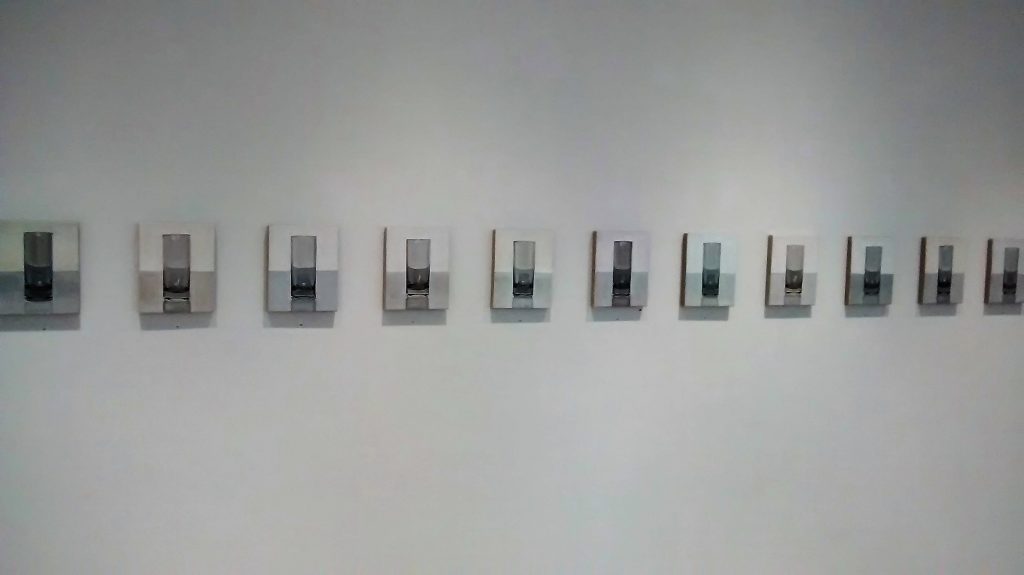 To Charing Cross tube station where I exit into Trafalgar Square and then take the short walk to get to the revolving doors that lead in to the National Portrait Gallery.  And entering here I often think of the quote from Macbeth where early on in the play poor old King Duncan comes out with the great line, ‘There’s no art to find the mind’s construction in the face.’  Of course, taken out of context, it can be read in two exactly opposing ways:  either to suggest that it doesn’t require any great skill to see what someone’s thinking, as their facial expressions will always ultimately reveal their true intent or, alternatively, that it’s impossible ever to know what’s really going on in someone else’s head no matter how hard you look them in the eyes.  As the following lines make clear, however, the doomed monarch was, in fact, thinking the latter and is expressing disappointment at the betrayal he’s just suffered by his erstwhile friend and ally, the Thane of Cawdor, ‘…a gentleman on whom I built an absolute trust.’  Evidently Duncan was a pretty hopeless judge of character as his next choice of candidate for the newly vacant Thaneship was none other than dastardly Macbeth who turned out to be…oh well, the point is made and I suppose I shouldn’t really give any more of the plot away. 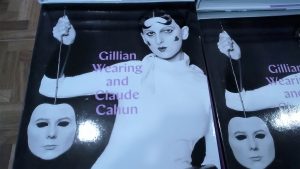 So, back to the art and, unsurprisingly, the Gallery’s wonderful permanent collection is full of hundreds of unblinking faces all looking down from the walls and encouraging visitors both to admire the brushwork used in their construction, and also gaze into the hearts of the subjects to try to formulate an opinion of the character held within.  It’s certainly not an easy task when it comes to any of the earlier, historical portraits, since the rooms full of kings and queens, aristocrats and nobility, landowners and politicians tend to offer a reflection not so much of how the sitters actually looked but more about how they wished to be seen by others.  After all, if you were rich and powerful enough to be able to afford to commission a portrait, then you probably felt entitled to get the most flattering version of reality that the artist could possibly produce.  And it’s only in the last century that the idea gains ground that a portrait could be more than just personal publicity or propaganda and represent a sort of celebrity psychological profile – that it might even be possible for a truly penetrating artistic visionary to confound the Bard and see beneath the surface veneer of reality, straight through the outward physiognomic expressions and X-ray deep into the actual soul of the subject and then lay it bare for all to see. 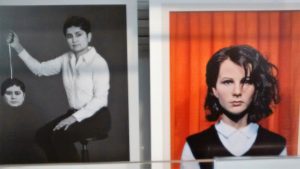 But if that’s what the aim of the 20th century Modernists was, when redefining the art of portraiture, then our own 21st century Post-Modernists have generally tended to concede defeat and admit that there is no one true defining picture of a personality to be painted.  And that, whatever our intentions may be, we continually present different versions of ourselves to the outside world, changing like chameleons to suit the shifting requirements of each social situation as it comes along.  Consequently, constructing avatars and aliases is common sense; engaging in regular revamps and makeovers nothing less than the healthy option; and the desire to reinvent and rebrand oneself a necessity, if only to provide vital new content for one’s social media followers.  No wonder taking selfies has become such a global obsession and that so many contemporary artists have become so interested in an ongoing examination of the self.  And so it is that the Gallery’s latest offering for one of its temporary contemporary exhibitions is a self-reflective meditation by Gillian Wearing on Claude Cahun entitled Behind the mask, another mask. 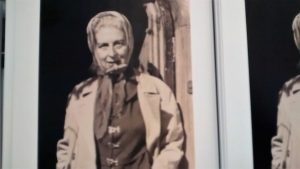 If Wearing is comparatively well known as one of the Conceptualist Turner Prizewinners of the 1990s then Cahun, by contrast, is probably one of the less familiar French Surrealists of the 1930s.  And while it’s tempting to suggest that Cahun’s relative anonymity and absence from the art history books might be due to the misogynistic nature of the artworld of the last century, in general, and the specifically macho posturing of some of the Surrealist showmen, in particular, the actual biography of the artist tends to contradicts this.  In fact, as the exhibition admits, there’s some question as to whether any of the few dozen small photographic self-portraits of Cahun that are on show here today were even intended as works of art, let alone created with the intention of them ever being exhibited before the general public.  In other circumstances, the selection of snaps showing the results of Cahun ransacking the fancy dress trunk and posing as an exotic turban-topped orientalist; a shaven-headed dandy; the diaphanously draped terpsichorean muse; or else role playing various other androgynous archetypes, might very reasonably be considered as just the fanciful record of a rather eccentric libertine with a penchant for dressing up, as documented by her lesbian partner. 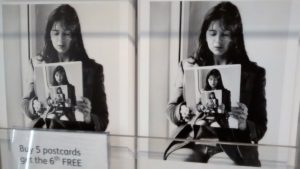 The results are certainly compellingly curious and evidently provided inspiration to Wearing who has gone to great lengths to re-enact one of the more elaborate of Cahun’s set ups that shows her with kiss curls and decked out in an old-fashioned circus strongman’s tights and holding a barbell.  Presumably the slogan on her blouse, ‘I am in training don’t kiss me’ was a private joke, the meaning of which has unfortunately been lost to posterity.  I’m not too sure what the audience gains from the Wearing version, in which the weightless weights have been replaced by the eyeless mask of the artist, but maybe it should just be classed as a sort of homage from one single-minded female artist to her idiosyncratic antecedent.  Elsewhere, Wearing offers an updated version of Cahun, insinuating herself into a variety of other guises, most frequently by way of using specially crafted masks and special effect photography.  And so we get to see large graphic representations of herself in a whole range of different personae – disguised as stars such as Andy Warhol and Robert Mapplethorpe; playing the role of her own parents and grandparents; aging in sequential steps from adult to octogenarian; and so on and on and on.  And yet, paradoxically, the more we see of her, the less we learn about her or, indeed, any of those other lives who she chooses briefly to inhabit. 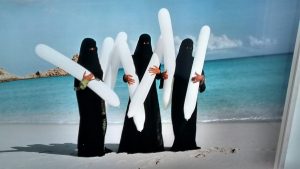 All in all, the exhibition is a diverting enough illustration of another chunk of Shakespearian prose – the famous bit about all the world being a stage and how we’re all merely players, performing our different roles as we progress from mewling infant to mumbling oblivion.  But whether Wearing adds any great insights along the way is perhaps questionable.  To revert to the Scottish play again, she’s clearly no idiot and her work has little sound and fury, but does it actually signify anything very much?  That, as someone else once said, is the question 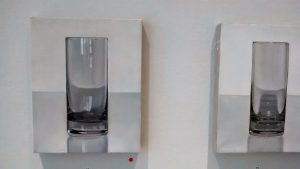 And so an end to that particular strand of soliloquising and a stroll along to a Cork Street that appears to be about halfway through its own recent face lift, which is to say that a lot of the scaffolding, skips and other street furniture seems to have been disassembled and shifted away.  And it’s good to be able to report that at least a few of the better galleries have remained and are currently displaying some decent little shows.  First up is Flowers where the photographer Scarlett Hooft Graafland is showing her highly colourful and elaborately staged absurdist interventions, including a man gripping a giant cactus between his legs; a gaggle of black burqua-clad beauties holding giant white phallic balloons; a trompe l’oeil carpet painted directly onto the polygonal cracks of a crystal white salt flat.  Next door up at The Mayor Gallery, a slightly more serious form of ludicrousness is offered up courtesy of Peter Dreher who has spent the past several decades painting the same picture of an empty glass, over and over and over and over again.  Of course each one is, at the same time, very, very similar in overall construction and yet very, very different in actual detail.  Whether one considers that the artist is to be admired, for the display of dedication and diligence required to stick so firmly within the constricting boundaries of his self-imposed constraints or pitied, for having entered into such a silly Sisyphean contract, will probably determine one’s view of the artistic end results. 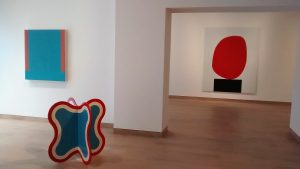 Across the Road at Waddington Custot, David Batchelor has curated a special little exhibition that show how Abstract artists have used monochromatic colouring over the past 60 or so years in a variety of different forms and formats.  It’s an entertaining journey that moves from the famous squares of Josef Albers through the metal boxes of Donald Judd and on to Joseph Kosuth’s neon lights and works from another dozen other painters, all showing off their signature circles, swirls and stripes.  If it comes across as a bit too cool and considered for some tastes, then the antidote is at Nahmad Projects where there’s a small but select show of sculptures by the master of kinetic art Jean Tinguely.  Motors whir, lights flash and feathers rotate to absolutely no end at all, other than to put a smile on the face of the weary blogger as he completes another day’s ramble and turns to head home. 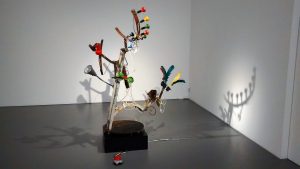