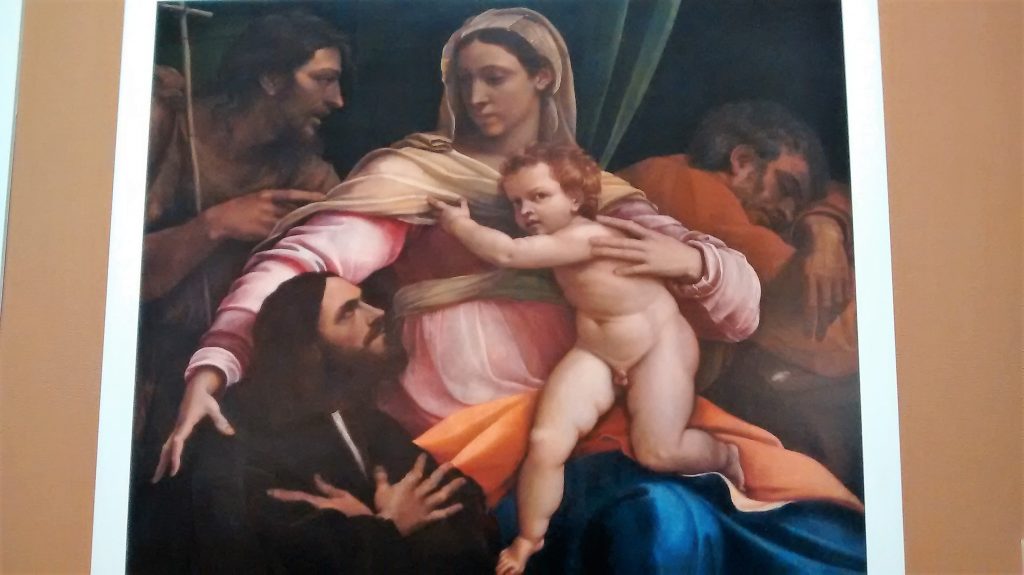 Once again it’s off to Charing Cross tube station and then across Trafalgar Square en route to get to the National Gallery.  But then, heading towards the steps that lead up to the columns and portico of the main entrance, I can see that this path into the building has been closed off and there’s a sign redirecting me westwards over to the Sainsbury Wing.  Here the security guys are doing a bag check before letting people in which, I presume, must be some kind of precautionary anti-terrorist measure.  Anyway, I’ve no intention of being intimidated by the threat of any ideological crazies and so determine to steadfastly carry on with my plan of seeing the Gallery’s latest would-be blockbuster temporary show examining the relationship between two of the great masters of the Renaissance:  Michaelangelo and Sebastiano.  Well, maybe that should read one-and-a-half great masters of the Renaissance for while I’m pretty sure that I’ve come across the name of Sebastiano del Piombo before, I think he probably counts as one of the second division players within the Renaissance artistic hierarchy. 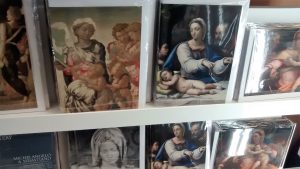 Which, I suppose, could be another way of saying that I’m not really very familiar with his work, although to claim any knowledge of his precise positioning and importance within the classical canon would, I have to admit, be a touch of art-bluffery on my part.  And though, on occasion, I may have engaged in this kind of mildly duplicitous dissembling, in an attempt to preserve my reputation when cornered in debate by a group of other culture vultures trying to score points at my expense, when rambling away in this blog I try to be as honest and transparent as I can be without appearing totally daft. 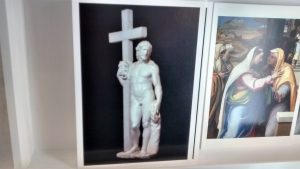 And, in fact, the main reason why I go along to shows like these ones at the National Gallery, where they fix a spotlight on some particular artist or else look in some depth at some specific artistic period, is to try to broaden my general artistic knowledge.  Of course, if it’s possible to get an early look at one of these shows, read all the labels and leaflets and then scan through some of the early reviews, occasionally it can also provide the opportunity to ambush one’s acquaintances who haven’t yet seen the exhibition.  With a bit of homework sometimes it’s even possible to casually slip in a clever comment about some aspect of an artist’s work which, if done smoothly enough, can score quite a lot of points in the game of cultural one-upmanship.   Mind you, it’s no good merely parroting something from the gallery guide.  There are too many potential pitfalls in simply offering direct recycled reiterations about how, for instance, ‘Sebastiano’s assimilation of Michaelangelo’s sculptural approach to the figure, coupled with his capacity to create works of psychological insight and spiritual solemnity, played a key role in the development of the new Roman style that had been established by Michaelangelo, Raphael and others’.  If lucky, one’s confreres will be sufficiently intimidated by this authoritative sounding piece of flummery to simply nod in agreement, for fear of appearing less au fait with the development of Renaissance art than everyone else.  But there’s always the danger some awkward person may break ranks, assume an air of teasing faux naivety and ask to be reminded what precisely were the chief characteristics of this Roman style that was so important to the historical advancement of Western art.  And, I confess, that even having seen the show and read all the notes I’m still not entirely sure myself, though whether the fault lies with the curatorial staff’s pedagogic failings, or my own my dilatory lack of attention, is a matter of opinion. 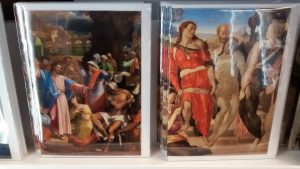 And, to be perfectly honest, while, with a bit of luck, I reckon I might well be able to pick out a Micahelangelo painting, drawing or sculpture from among a mixed selection created by a group of his contemporaries, even now I still don’t think I could confidently differentiate a Sebastiano from amongst a wall full of other Italian daubers of the period.  To a lay person like myself there seems to be such a wide variation in the style and quality of his overall output, at least as revealed by this current exhibition, that I’d struggle to be able to highlight any very obvious outstanding characteristics of his work to be borne in mind when trying to spot a Sebastiano in any future artistic identity parade.  So while I think I’d accept the suggestion from the exhibition notes that his paintings are less stylised and slightly more spontaneous, loose and improvisational than those of Michaelangelo’s, which could be considered more accurate in representation if more stagey in their composition, I’m not sure that helps very much.  From my own careful amateur scrutiny, I think it’s fair to say that the work of Sebastiano is a good deal less camp than that of Michaelangelo.  So that whereas the in the former’s painting of The Flagellation of Christ, everyone rather sensibly covers up their dangly bits with briefs, bits of toga or other wispy shreds of material, in the latter’s drawings everything hangs very loose indeed.  Similarly, Sebastiano’s characters tend to be more averagely proportioned when compared with those of Michaelangelo, who all tend to share the same overdeveloped rippling musculature of fantasy cheesecake models or the kind of narcissists who spend far too much time exercising in the gym and then posing in front of the mirror. 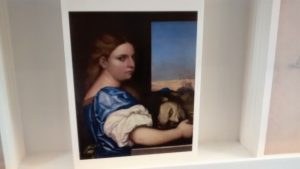 Aside from a consideration of the didactic aspects of the exhibition, some of which, I’ve tried to sketch out above, there is, of course, another reason for visiting the show and that’s to take advantage of the opportunity of enjoying some of the simple aesthetic pleasures that come from reexamining any of the artworks produced during this extraordinarily fruitful period of art history.  And I think I can probably vouchsafe that as well as a fair selection of beautiful preparatory drawings and some fairly deft portraits, each of the six exhibition rooms also contains at least one or two real standout large-scale stunners to capture the attention and provide the appropriate wow factor expected from these kind of big ticket shows.  So, for instance, the Lamentation over the Dead Christ is certainly an extraordinary and striking arrangement and not surprisingly was the image chosen for reproduction on all the posters and other advertising material.  Apparently the work was a joint production, with Sebastiano’s painting based on Michaelangelo’s unusual composition of Christ lying alone in a horizontal pose while Mary floats above seeking solace by gazing up to the heavens.  Similarly, even though the version offered is only a plaster copy and not the original (that remains in the Vatican), the recreation of the Pieta, with Mary cradling Christ in her arms, is still a marvelous piece of work and confirmation of both Michaelangelo’s experimental and practical genius.  Impressive but much less successful I think are the other two large Michaelangelo sculptures on show here, with both his alternate interpretations of The Risen Christ looking just a bit uncomfortable and neither quite innovative or exceptional enough.  Although, having said that, the fact that the sculptor chose to show the figure on both occasions sans the usual loincloth would, apparently, have been considered extremely unusual at the time of their unveiling.  As for the most impressive of the Sebastianos, I think laurels must go to yet another replication, this time a very realistic, nearly full-scale 3-D facsimile of the Borgherini Chapel which contains a life-size rendering of the Flagellation of Christ mentioned before.  While the subject matter may be a bit on the specialist side for some tastes, there’s no doubting the vivacity of the composition and Sebastiano’s technical mastery when it comes to applying the brushstrokes. 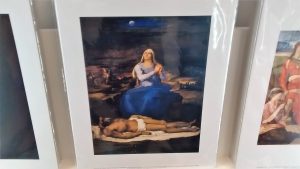 So, all in all, an interesting enough exhibition that ensures Michaelangelo’s reputation remains safely intact while Sebastiano’s probably rises a notch or two up the old master league tables. 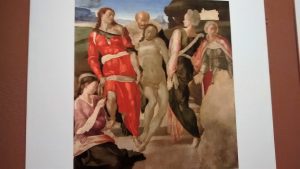 Elsewhere in the Gallery is another smaller, temporary, free-entry exhibition devoted to a display of The Caged Bird’s Song, a massive tapestry designed by the contemporary artist Chris Ofili and woven by workers from the Dovecot Tapestry Studio following a commission from the City of London Clothworkers’ Company.  A couple of walls of drawings and preparatory sketches by Ofili lead up to the main room containing the completed work on view, prior to its permanent installation in the Clothworkers’ canteen or cloakroom or some other hugely expansive location.  An accompanying film shows what a talented bunch of craftsworkers are employed at the Dovecot Studio and just how skillful they were in managing to transcribe Ofili’s wishy-washy watery watercolour painting into the warps and wefts of their threaded replication. 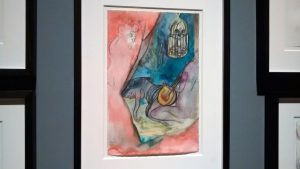 As for the actual image, it’s a curiously old-fashioned piece of drippy, symbolistic, gossamer-weight ethereality in which a pair of curtains are drawn aside to reveal a man sitting under a waterfall strumming a guitar, while his snoozing partner is woken from her reveries by a mystical barmen sitting in a tree who pours a cocktail over her head.  Meanwhile, at the far right edge of the picture is the eponymous caged bird.  I’ve absolutely no idea why it’s singing or what it’s singing but regardless of the nature of the lyrics and music, in my opinion I think that maybe this Song falls just ever so slightly flat. 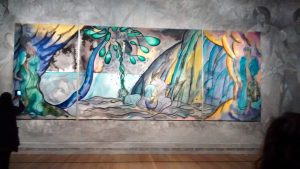