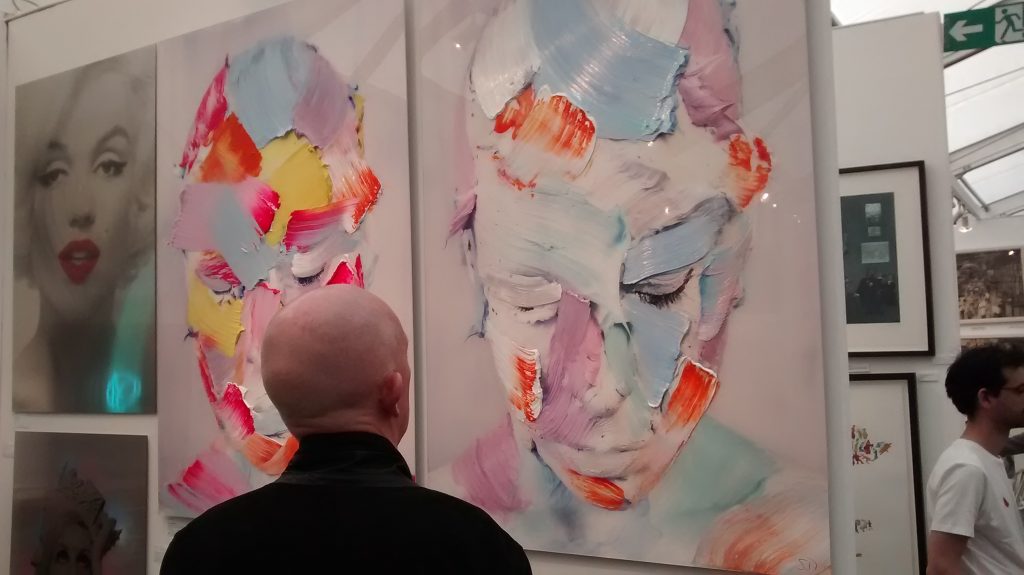 To West Hampstead tube station and then from the Underground to the Overground and another couple of stops over to Hampstead Heath.  It’s not an area of London that I’m all that familiar with so when I exit the station, unsure of the direction to travel, I decide to tag on to one of the lines of people who all seem to know where they’re going to and look like they could well be artophiles in search of a Sunday culture hit.  Although, on reflection, I’m not sure they look too much like me, since each and every one of them seems to be so very well-heeled and gently tanned and all possess the glossy hair and gleaming white teeth indicative of glowing good health and a comfortably insulated bank accounts.  In fact, with everyone wearing clothes that look like they were bought yesterday and put on for the first time this morning, I feel like I might have inadvertently walked onto the set of a colour supplement photoshoot, especially when half the young couples are accessorised with either a pair of waggy-tailed spaniels or a couple of cutesy little kids. 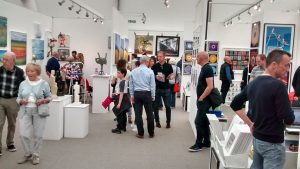 I can’t help thinking that if nice old avuncular Mr Corbyn were ever to come to power then the majority of this lot would be shipped straight off to the gulag.  But, in the meantime, I reckon I’d still have time enough to switch sides on the barricades, should the need arise, in which case, I think it’s probably safe to follow along after them.  And where is everyone going today?  Why, we’re headed off to this year’s Affordable Art Fair caravanserai which has temporarily settled its cavernous canvas encampment in this part of North London’s La La Land.

So, first of all, what’s the art like here?  Well, considering that there’s such a very specific self-defining adjectival descriptor stuck on the front of the title of this particular art fair, it rather behoves me to make some mention of the comparative range of prices of the various paintings, prints and sculptures on display.  And these seem to run from around the £250 mark for a smallish limited edition print up to about £5,000 for a largish original oil painting.  As to the matter of whether it’s appropriate to classify either end of this spectrum of costs as actually ‘affordable’ rather depends on the pecuniary position of the individual.  Perhaps more important is whether any of it is very good value.  And here I have my doubts.  Frankly, in my opinion, I think that were one to be in the happy and enviable position of having, on the one hand, a blank cheque and, on the other, an empty art-shaped space on the living room wall that required filling, it might be better to look elsewhere for something to fill it.  It’s not that all of the art in the Fair is necessarily bad or kitsch or unimaginative or poor quality – though it’s all too easy to find multiple examples of all of these kinds of things.  It’s just that paying out money for the stuff here that is reasonably attractive, neatly composed and competently constructed – and I readily concede that there is a small percentage of works that tick all those relevant boxes – would not be a sensible use of one’s cash.  The point being that there are better artworks outside of this arena that can be acquired for smaller sums.  More particularly, I think that few, if any, of the artworks showing in the Fair are likely to retain their value over time whereas, with a bit of skill and care, I think it’s still very possible to purchase art that will not only provide equivalent aesthetic and intellectual pleasures but also have the potential to be a reasonably safe longterm financial investment.  Now, I’m definitely not suggesting that art should be bought solely in an attempt to turn a profit by trying to determine what to buy and when to buy and then sell it based on some kind of strategic market analysis, merely that it should be possible to buy art that’s not only visually appealing but can also act as a sort of hedge against inflation.  The point being that then, should the need arise twenty or thirty years in the future, hopefully an artwork might be resold for a price roughly equivalent to the amount that was originally paid for it.  And in exceptional circumstances, if one were very lucky, it might even yield a small return above that of the normal inflationary increases.

Of course, if you see something at this Fair, or anywhere else for that matter, and get a real kick from it and think it would look great above the fireplace or covering that damp patch in the bedroom then, if you can afford the price, it probably makes sense to just yield to the impulse and go ahead and grab it.  But for those of a more phlegmatic temperament, who are willing to do a bit of research and keep their eyes open, bargains can sometimes be found when wandering around some of the galleries that I blog about.  In short, whatever is tempting at Hampstead, I think there’s probably another bit of art out there that would give just as big an aesthetic bang for the same, or fewer bucks, and would be by an artist who has either achieved, or is soon to achieve, the kind of recognised professional status that will mean people will still want to collect their work well into the future. 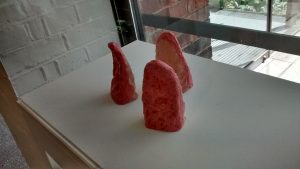 All of which I suppose sort of obliges me to offer up some real, tangible suggestions as to things that fit into this category of the art that looks, to my eyes at least, like it might be worth investing in.  So, first off a journey back on the Overground to the Camden Arts Centre where, like most of the capital’s grant-funded, non-commercial art galleries there is a changing display of small artworks by artists who have either had an exhibition at the gallery or got some other association with it.  And what caught my eye here amongst the other prints and photographs was a little display of ceramics and in particular Emma Hart’s Mouldy Tongues priced at £240 (edition of 7).  The artist is a tutor at Central Saint Martins and was the winner of last year’s Max Mara Art Prize and so seems a fairly safe bet to continue a reasonably successful career in the artworld.  And as for these particular artworks, well, I’m sure that having one of her pretty pink pottery pieces placed on the mantelpiece would confirm to the world that its owner was a thoughtful patron of the arts and a person of sufficiently sophisticated and refined good taste to be able to appreciate a witty Surrealistic jeu d’esprit.  And who wouldn’t want to have that kind of a reputation?  Incidentally, another good reason to visit the gallery at present is to see the current mini-retrospective of work by Geta Bratescu who may be relatively unknown in the west but apparently is something of an artistic superstar back in her native Romania.  And the show is surprisingly interesting as it charts the lifelong output of an artist who has variously concerned herself with producing old school Conceptualist constructions, Performance Art documentation and suites of simple collages aimed at investigating topics of identity and dematerialisation (at least that’s what the gallery guide say about the collages, I just though they looked nice).  So there’s a trail of fabric that shade from black to white; a video of the artist playing pat-a-cake with a bowl of mud; shreds of paper from a year’s worth of discarded dogends and a whole lot of other quirky souvenirs to enlighten the curious about how life plays out on the outer fringes of the European community. 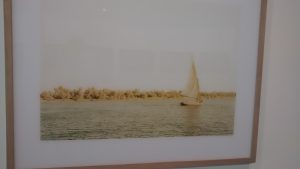 Back on the window shopping tour it’s only a couple of tube rides to get to Old Street and then to the Parasol Gallery where the current show is a reasonably pleasant display of large-scale photographs by Elger Esser charting various sites along the water courses of the Middle East, or Morgenland as he’s titled it.  The chief characteristic of the works on show, aside from their impressive dimensions, is that they’ve all been drained of colour, presumably due to their being deliberately over-exposed in the darkroom.  As a result, the prints are a subtle symphony of sepia tones which, I suppose, gives them an air of ethereality that may or may not be appropriate when considering a representation of this timeless yet troubled part of the world.  Frankly, I think I preferred the previous exhibition in the Gallery by Tschabalala Self, which consisted of wildly expressionistic portraits constructed out of large swathes of fabric collaged together.  One of these images has been used to ornament a set of limited edition ceramics with prices ranging from £14 for a mug (edition 100) to £85 for the plate (edition of 25) – both of which seem to me to be very reasonable prices to pay. 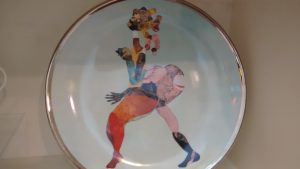 Finally, it’s a bit of a longer ride along the Jubilee line to get to Canada Water and on to the Café Gallery (which I think has rebranded itself and so prefers to be known by the initials CGP, although I’m not quite sure what they’re meant to stand for).  I have to say that the current exhibition of paintings by Sarah Pickstone is not really to my taste, representing as it does a typical example of the Post-Modern dauber’s desperate struggle to find a subject considered worthy of painting.  She seems to have settled for a messy mix of abstracted landscape and people, with referential allusions to Pablo Picasso and Virginia Woolf, although I’m not sure why.  But again there’s a small display of limited edition artworks here including a special CD with booklet from Richard Wilson who is unquestionably a genuine big shot in today’s artworld.  He’s probably most famous as the man who made the 20:50 oil installation (on permanent show at the Saatchi Gallery) but he also created the absurdly vast sculpture that fills Terminal 5 at Heathrow Airport, and very successfully curated last year’s Royal Academy Summer Show.  The last time I blogged about him was complementing him on his Annely Juda exhibition of wooden reconstructions.  And now, here is the chance to buy a very nice limited edition work from the man for only £80!  It’s such a bargain that I couldn’t resist buying one myself and am happy to recommend that you do likewise 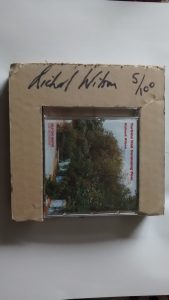 All the items I’ve happened to list above are small sculptural objects but if it is a wall that needs covering then I’d recommend visiting the annual Original Print Fair at the Royal Academy.  This year’s event finished a couple of weeks ago and there were certainly some very attractive Paolozzi prints on sale there for under £500 and a wonderful Alexander Calder signed monoprint for £800 that was nicer by far than anything I saw in Hampstead.  Had I not dithered and let someone else barge in front of me with their chequebook, I’d be looking at it now and complementing myself on my wonderful sense of taste and wise bargain hunting skills.

One response to “Off to the Gulag”