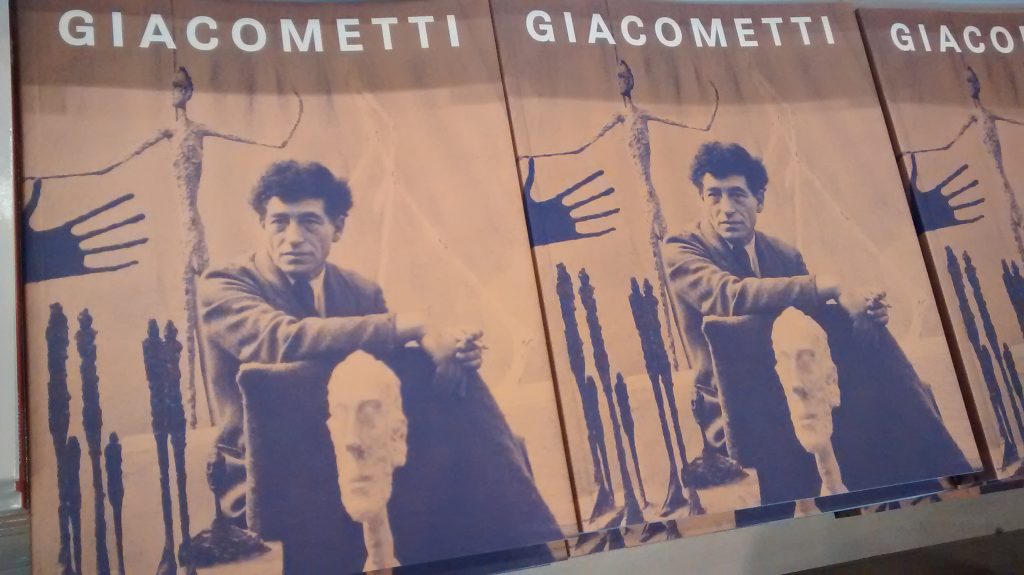 To Southwark tube station and then walk round the backstreets to get to the ramp that leads down into Tate Modern’s ground zero level, the so-called Turbine Hall that each year gets handed over to some new artist who’s then given a commission and told to fill it up with art.  It’s such a massive, awkward space that I sometimes wonder if it should be renamed the Poisoned Chalice Gallery since, over the years, only a couple out of the dozen or so artists who’ve taken up the challenge to create a temporary, site-specific installation here have ever made anything that’s even been remotely successful.  Most people quite liked Louise Bourgeois’ giant spiders, and Anish Kapoor’s zeppelin-sized, red, floating prophylactic had its fans but only Olafur Eliasson’s sun and mirrors really achieved take off. This didn’t just get the thumbs up from most of the professional critics but, much more importantly, actually managed to generate a genuine buzz of interest and excitement amongst the general public, managing to attract cascades of visitors all eagerly entranced by the idea of laying recumbent on the floor and gazing up to look at their reflection being bounced back from a mirror suspended from the ceiling.  Most of the other works that have been dumped in the space, from Rachel Whiteread’s pointless piles of empty plastic storage boxes to Doris Salcedo’s creeping crack in the gallery floor, have all just been a bit boring and certainly the most recent efforts – Abraham Cruzvillegas’ tubs of earth in which nothing grew and Philippe Parreno’s flying fish that didn’t fly – were both spectacularly unspectacular. 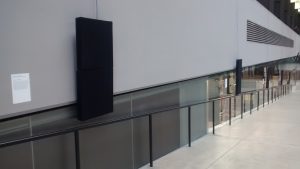 So, it’s almost a relief to find that there’s absolutely nothing to see in the space at present which, paradoxically, is not to say that there’s no artwork on display.  In fact, the Tate has decided to reprise a commission from 2004 and it’s a simple piece, or sequence of pieces, that actually fills the space really rather successfully, in as much as it’s diverting, direct and has the very practical and sensible advantage of being easy enough to ignore if you don’t like it.  Bruce Nauman’s audio work, Raw Materials, consists of a succession of loudspeakers hung equidistant along the walls past which the gallery visitor must walk en route to get the rest of the exhibition spaces.  Amongst the cacophony of monologues that emanate from these disembodied speakers I noticed one childish whisper, but most of the siren voices sound like grouchy old men endlessly repeating soundbite phrases, with their meaningless mantras becoming ever more gratingly irritating with each reiteration.  I have to admit that I’ve no idea why listening to some grizzling old grumper repeatedly barking out Thank You Thank You or Work Work Work Work over and over again should have a sort of transfixative appeal but, I confess, it does for me.  I guess it must be some kind of generational, demographic thing and that the mere fact of hearing the random exasperated gripes and grunts of other old ranters provides a kind of perverse comfort and sense of communal solidarity with the cloud of kindred spirits that comprise the rest of the grumpy gray fraternity. 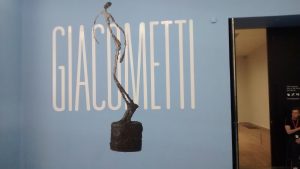 Anyway, having quite enjoyed running this aural gauntlet it’s on up the escalators to take a look at what’s on in the main gallery.  And about 18 months ago, as some of the more dedicated subscribers may recall, I was blogging about the Giacometti show at the National Portrait Gallery.  At the time I suggested that there was little to be gained by just focusing on his portrait work and that it would be good to see a proper show covering his entire output.  And voila – it’s good to know that the high-ups at the Tate evidently take note of my comments for they’ve decided to fulfill my request and stage a proper, full scale retrospective of works by the very self-same Swiss sculptor.  Now, there’s always a bit of a risk in giving artists the full, 10-room biographical review since it subjects them to a similar, potentially fateful, level of scrutiny that goes with getting the chance to take on the Turbine Hall commission.  I’m not sure, for instance, that the recent Rocky Rauschenberg retrospective did the famous American Pop Artist any favours.  For while it was good to see some of his famous works in the flesh, after a terrific start, the quality of his output seemed to tail off surprisingly early in the show which, for me at least, put a bit of a dent in his reputation.  Though I’m still not quite sure whether this accurately reflected the diminishing strength of the artist’s innovatory skills or was maybe more symptomatic of some failure of curatorial competence. 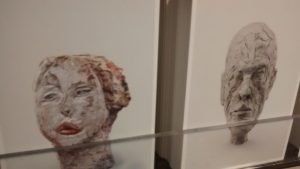 Fortunately, for all concerned, Giacometti passes the retro-test with what might be called flying colours were it not for the fact that his favoured personal palette of choice was so very consistently restricted within a small range of whites, blacks, grays and ochres.  Of course, much of this is due to the artist sticking to the traditional sculptor’s range of muted tones dictated by the choice of working in plaster, bronze and stone.  But if Giacometti was a traditionalist in his choice of the materials and the methods of modelling and carving, throughout his career he was a dedicated experimentalist when it came to investigating new metaphorical methods and means of representing the changing shape of humanity’s figure, face and features. 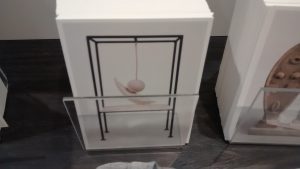 I suppose in very broad terms the comfortable chronological layout of the exhibition shows the artists starting off by producing fairly formal portrait studies of schoolboy friends and family members before entering a radical, semi-Surrealist, semi-Abstractionist phase of investigationisms.  This is probably the least well known chapter of Giacometti’s biography and therefore, in some ways, the most interesting section of the show.  And the way the curators have laid out works from this mid-period it’s as if we’re able to look over the artist’s shoulder as he tests out and trials different forms and strategies for making representations of the world around him.  So, with some of the works it’s possible to trace a linear progression as faces gradually lose all their features and finish up as thin blades of stone.  While, at other times, it seems the artist is playing with purely symbolic arrangements of shapes and geometry, as when he suspends a ball from the lintel of a wire cage, letting it hang down and kiss the curve of a banana placed below. 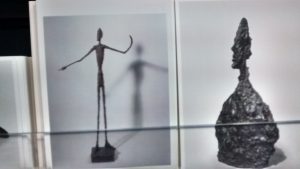 And then, after this investigative interlude, there follows the long period of consolidation and refinement where Giacometti finds and develops his distinctive signature style, or styles, whereby he distorts and distends different aspects of the human form.  It’s as if he’s deliberately decided to pick apart the golden proportions of Da Vinci’s Vitruvian Man, individually deflate each and every one of those pumped-up, symmetric muscles, and then go back to the drawing board and start redesigning the human frame all over again.  And so, instead of the confident optimistic presentation of Renaissance perfectionism, Giacometti proposes a variety of updated versions ranging round a central core of nervous Existential worry and uncertainty. At least, that’s the usual interpretative meaning used to explain the artist’s production line of shrunken heads, shriveled bodies, flattened crania and pinched expressions. 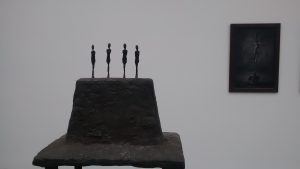 Personally, I’m not really sure whether these Lilliputian men and string-thin women really do reflect the specific frailties of the human spirit in the age of angst that fell across Europe between the end of the Second World War and the start of the Swinging Sixties permissiveness, any more than Nauman’s disembodied voices echo the precise fears and frustrations of our own current chaotic times.  Instead, I think the reason for both sets of art working so well is that they manage to stand outside of time, defying simple categorisation yet resonating with some sort of universal archetypical themes, though I’d be hard pressed to define exactly what these themes might be, except for waffling on about referencing the general state of the human condition and…  In short, it’s not easy to put into words exactly why both these artists grab and hold the attention so very successfully and, that being the case, I think I’ll give up trying and just suggest that it may well be worth going down to the Tate to take a look (and listen) and see what you think. 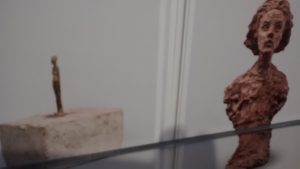 NB Some of the photos above come from the Gagosian Gallery in Britannia Street which is also currently showing off examples from its own very attractive collection of Giacometti sculptures. 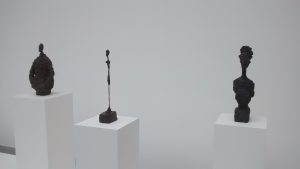