To Piccadilly tube station and then walk along to the Royal Academy for a look at what’s going on in this year’s Summer Exhibition.  In fact, I’m paying a return visit having undertaken a cursory reconnaissance tour a couple of weeks ago.  On that occasion I was decidedly underwhelmed by the experience but thought it might be less a reflection of the quality of art on the walls than maybe that of the semi-digested contents of the previous evening’s supper as it coterminously pushed a peristaltic pathway through the convoluted passages of my internal organs.  For, just as dear old Ebenezer Scrooge initially thought that his nightly Christmas hallucinations might be caused by an undigested bit of beef, a crumb of cheese or a fragment of underdone potato, I wondered if I might be suffering from having inadvertently eaten a couple of dodgy broccoli spears or perhaps consumed more than the daily recommended number of units of pasta alla fiorella.  The point being that food affects mood affects mind, and that if this spectator, in particular, is feeling sub-par due to some kind of gustatory imbalance, karmic dysrhythmiar or other dyspeptic mental disequilibrium, the chances are that it may well affect the sensory inputs, mental analysis and aesthetic consideration of any artwork under inspection, and thus negatively distort the chances of achieving an appropriately impartial evaluation. 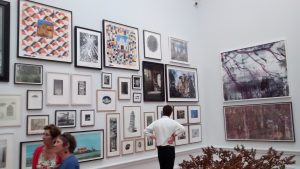 So, reckoning all that into account, for my return visit I decide to take the precautionary measure of starting the day by choosing the healthy option meal from the menu of my favourite Marylebone breakfast boutique.  And what could be better designed to settle both stomach and cerebral functioning than a roll containing a fatty piece of overcooked bacon and a crusty curly whirl of Cumberland sausage substitute, plus a side order of two greasy potato croquettes, all washed down with an entirely taste-free cup of cappuccino coffee?  The only discordant note accompanying the consumption of this fabulous foodie feast is the lingering background grumble that said meal has been subject to a recent inflationary price hike somewhere around the 2% mark.  Oh well, I suppose we all have to tighten our metaphorical money belts after years of having loosened the real ones.  Although, unfortunately, it seems this financial recalibration may be more like a trend than just a blip since my next call – stopping off at a Pret a Manger’s for the requisite drink that will help dilute away the salty aftertang of my meaty main course – reveals that the cost of my favoured fizzy elderflower and kumquat cordial has recently risen by just over ten percentage points. 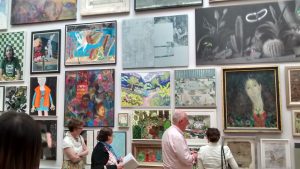 But before one leaps to the kneejerk reaction of blaming it on Europe – or, more specifically, the step change in exchange rates resulting from our impending exit from that mythical land of milk, honey and agricultural subsidies – I think the push factor for these price rises is more likely to be due to the recent increase in the so-called minimum wage.  Presumably this has a disproportionately higher impact on the economic business modellings of fast food outlets with their workforce of mainly minimally-waged employees.  In which case, perhaps these market adjustments that will be increasing my outgoings will be concomitantly increasing the incomes of those workers at the bottom of the economic pile and so directly – if perhaps only very marginally – helping to reduce the otherwise widening levels of societal inequality.  And this, I suppose, is actually quite a good thing. 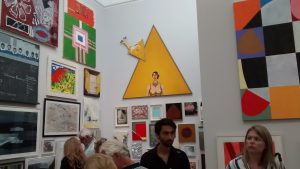 And so it is, with the comforting thought that my personal financial self-sacrifice may very well be making some direct beneficial improvement to the lifestyles of the poorer members of society by way of progressive redistributive econometrics, I stride confidently into the charming sunlit piazza at the front of Burlington House, circulate myself through the revolving entrance doors and bound up the stairs into the first room of the Summer Exhibition feeling in a better all-round general condition than on the recent prior occasion when I previously passed through the same Palladian portals.  Sadly, however, I have to report that even though this time I’m enjoying the inner warmth associated from having both a sated stomach and a conscience made virtuous by the act of paying more for my grub, after walking through the first two rooms of the exhibition, once again I start to feel decidedly underwhelmed. 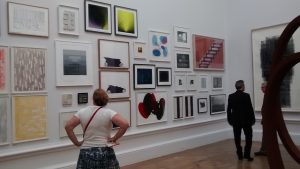 Before getting down to the nitty-gritty detail and suggesting just why it is that wandering round the displays is quite such a dispiriting and wearisome perambulation, perhaps it’s worth considering what it is that the Summer Show actually attempts to show each summer.  I daresay this has evolved over the past 250 or so years that it’s been running, but nowadays I think it’s meant to provide a sort of general consensual establishment overview of what might be considered to be the acceptable face of contemporary Modern Art.  So, if you want to know what are the cryptic concerns and innovatory modes of expression with which the young thrusters of our youthful avant-garde are attempting to delineate their exciting new world, then you’re not going to find any of it here.  But if you want to know what is considered to be appropriate, good taste decoration for the lounges of the just-about-managing-very-nicely-thank-you bourgeoisie – something perhaps a little edgier than the landscapes, still-lifes and reclining nudery that used to ornament the walls of their parents’ withdrawing rooms – you’ve come to the right place  In other words, it’s all the comfortable designer furnishing that sits in the middle of the road that separates the messy incomprehensible bricolage collections of the activist student artist and the steady-state realistic certainties of quasi-impressionistic paintery that was fashionable about fifty or sixty years ago.  So, there’s quite a bit of abstraction, a mass of designer descriptives and a bit of entry level conceptualism but definitely nothing to frighten the horses, shock the au pair or make the authorities suspicious. 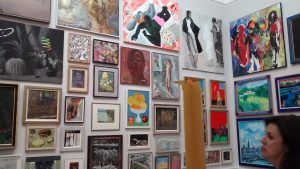 Indeed it could be argued that it’s quite a fair representation of the aesthetics of artists of the third age; those sexa-septua and octogenarians who are no longer interested in devising novel technical methodologies for representing their visions of the world but long ago settled on the modus operandis that best suited their abilities and inclinations and are happy now to employ them in doodling and daubing away their dotage.  I suppose about half of the thousand-plus paintings and sculptures on show are from Academicians, including the likes of Sean Scully, Tess Jaray, Tony Bevan, Allen Jones, Cornelia Parker, Yinka Shonibare, Tracey Emin and Michael Craig-Martin; while there are also another bunch of works from overseas invitees, like Anselm Kiefer, Frank Stella and Julian Schnabel, who are given honorary Academy status; and finally there are all the items accepted from the open entry submissions from among the mass of unknown artists who are nevertheless sufficiently skilled to be able to produce work in suitably similar styles to those of the other professionals already listed above. 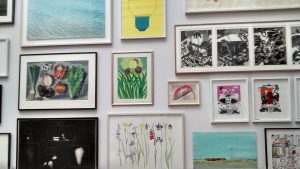 While there are few works that are actually egregious or unpleasant, I don’t think there are any absolute stand-out stunners but quite a lot of very reasonable, competent artworks and certainly if any of the names I’ve highlighted was given a one-person show I’d be inclined to pay a visit and expect to enjoy the show.  Where the problem arises and what makes the overall exhibition such hard work to examine and so tiresome to trudge through is that the curator, Eileen Cooper, (a very reasonable artists in her own right) has managed to make such a hash of the hang.  Obviously it’s no easy matter trying to place dozens and dozens of differently styled artworks all closely together and maybe it was just as bad last year, although I don’t remember it being so, but this time round it really does seem to be an exceptionally confused and messy concentration of clashing and competing imagery. 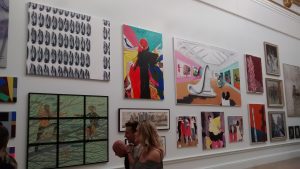 Trying to repeatedly readjust one’s aesthetic goggles to take in such a massive variety of different visual stimuli becomes too hard work very quickly and I confess that I gave up trying to concentrate after the first half dozen rooms.  And as my eyes started to glaze over, I just skimmed my way through the rest of the show, feeling greatly relieved on finally exiting out into the fresh air already thinking how I might best next continue to contribute to society’s economic equalisation. 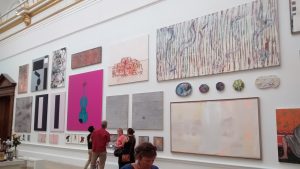