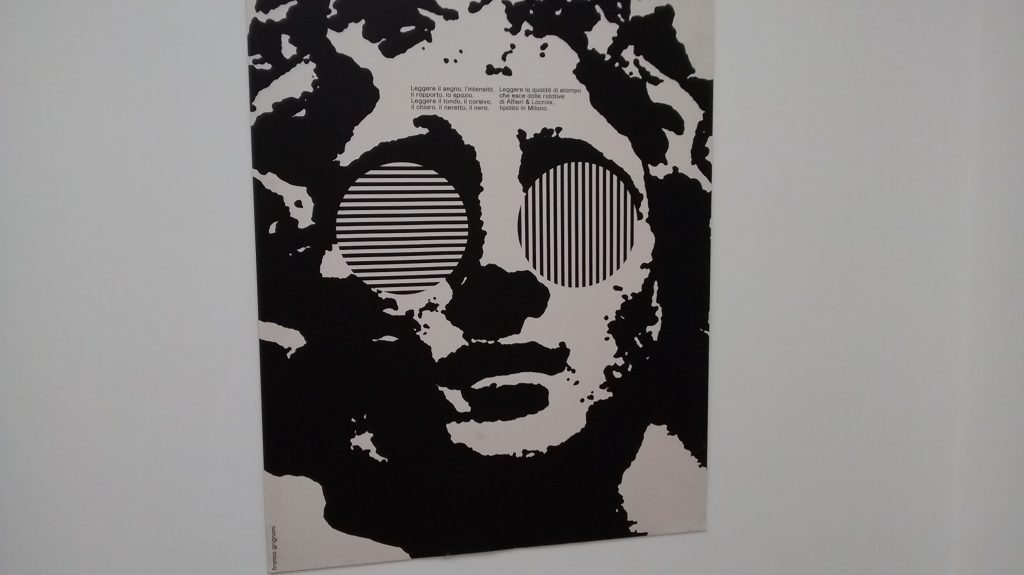 Head up north to Angel tube station and exit out onto the steaming hot pavements of Islington looking for some shade to shield me from all those energized electron particles and pulsating ultra violet radiation rays that are streaming down from the sky above and thus signalling that summer has once again determined to make another transient seasonal appearance.  Fortunately, I noted the predictive postulations on my trusty BBC weather app gizmo machine this morning and so have made the requisite sartorial adjustments to cope with this exceptionally searing Saturday sizzler.  So it is that, decked out in my lightweight M&S linen suit, stylish Boots sunglasses and authentic Breton beach hat – purchased during the Costa Brava excursion that took me to the Dali Museum in Cadaques a year or so ago – I stride purposefully up up Upper Street.  And at least I can comfort myself that while I may be starting to overheat internally, I still look pretty cool externally.  At least, that’s the self-delusional theoretical piece of auto-suggestive psychomindtrickery that I’m road-testing today as I breeze through the doors into the Business Design Centre to take a look at New Designers:  The exhibition for emerging design.  It’s an annual event I think but not one that I’ve been to before and, frankly, I’ve not much idea what it’s all about but I reckon I’ve probably got the usual amateur interest in things to do with design that most people share and, since someone was kind enough to email me a free-entry pass, I’m willing to take a look and blog a report of my findings – albeit that it’s slightly out of the usual fine art range of speciality interests with which I usually engage. 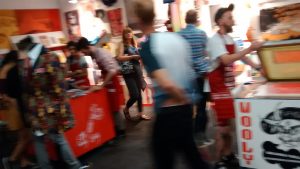 In terms of a very quick digital response, unfortunately I don’t really have much option other than to give it a very definite thumbs-down as I find myself having exited the Centre within about twenty minutes of having entered, and having barely seen a tenth of the stuff on display.  The main reason for this hasty departure being that there doesn’t seem to be any air conditioning in the hall and I’m already feeling half-cooked and would prefer to remain at the rarer end of that particular temperature scale.  That and the fact that the exhibition seems to be so very overcrowded, with innumerable rows of display stands all jammed together competing for attention and crammed with panels of informational texts surrounding tables bedecked with deconstructed gizmos, geejaws, scale models, proto-types bits and bobs, doo-dads and whatnots.  There’s just too much going on in too small a space and, considering it’s meant to be a showcase for the best efforts of design schools and design students it’s hard to avoid the irony of having to say the whole show and all its individual component parts suffer from layouts that are so incredibly, old-fashionedly badly designed. 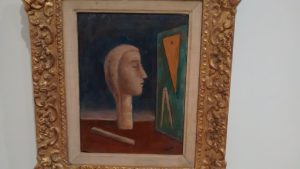 Well, that was a slightly odd and very disappointing start to the day’s perambulations but, luckily – if you’ll forgive the use of a somewhat distressing idiomatic expression – there’s another bird I’m hoping to get stoned by having come to this particular part of town.  For, about fifteen minutes’ walk from the Business Design Centre is the Estorisck Collection (of modern Italian art) which, having been shut for half of last year, has now recently reopened.  I’ve been to this place a few times before over the years and always rather liked it so am curious to see how all this refurbishment work has gone.  And I suppose it’s gone ok, for the place certainly looks sparkling and refreshed after the liberal application of a good few gallons of white paint to cover just about every nook, cranny and other bit of all the internal wall spaces, cavities and protruberances.  But I’m not sure there have been any other architectural alterations or additions – at least, if there were then I didn’t notice them – which is a bit of a pity.  I’d rather hoped that maybe they were going to reveal another three or four exhibition galleries since the only disappointing note to visiting this place is that it’s not bigger and doesn’t manage to have more art on display.  Nevertheless, even in its current formulation, the galleries are still worth taking a look around since they contains an elegantly presented introduction to the role that Italian artists played in the early art historical development of European Modernism.  So, there are small rooms with examples of works from most of the relevant star names – not just famous Futurists like Balla, Carra, Boccioni and Severini but also individual pieces from the likes of Modigliani, de Chirico and Morandi.  And there are certainly some good works on display here, it’s just a pity there aren’t more from that fascinating, fast-moving early period or any at all from the second half of the 20th century when Italian artists once again played an important role in the experimentation going on within sculptural formats via the so-called Arte Povera movement.  Although, having said that, I note that some of the artists associated with that seminal stylistic turn are going to feature in the Collection’s next temporary exhibition – an occasion that should definitely worth be diarising for a future visit later in the year.  In the meantime the current temporary exhibition features paintings and prints from the rather fantastic futuristic Op artist Franco Grignani.  I’m not sure whether these wonderful geometric twists and swirls of black and white patterning should be considered fine art, design or commercial art but then I’m not sure it really matters very much, suffice to say they are all eye candy of the highest order. 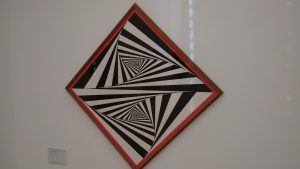 And so following that pleasing visual snack it’s back on the road where, after a couple of tube rides, I’m once again following the yellow brick line that delivers visitors into the bricky maze of the Barbican Centre.  Again there’s not really any fine art amongst the display I’ve come to see here but there’s certainly a lot of trash art, lurid graphics and enough titillatory visual stimuli to keep a hoard of schoolboys and nerdy adults, including myself, amused for an hour or so.  And what is the theme that has allowed the curators to collect together such a highly entertaining mix of models, film clips, book graphics and multiplicity of other trivialising ephemera?  No, it’s nothing to do with bus tickets or model train sets, Into the Unknown is the ground floor Curve Gallery’s self-defined Journey through Science Fiction. 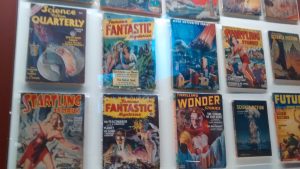 Had it been situated in the third floor art gallery upstairs, then the show would doubtless have been one of those worthy but dry intellectual explorations into psychological aspects of the inner meaning of outer space or some such convoluted construction but downstairs the displays tend to be a bit more populist, to use today’s most overworked adjective.  And so it is here where a pulp magazine aesthetic is employed to show examples of every sci-fi cliché from scary hairy monsters to intergalactic bikini-clad Amazons, and from parades of robots androids and cybermen on to the exploration of all those lost worlds found to be full of man-eating plants, giant gorillas and angry anachronistic dinosaurs.  It’s all utterly daft but also strangely compelling and who could fail to smile in happy recognition at seeing displays of actual Star Wars stormtrooper face masks or video clips that include Thunderbird spaceships; Jurassic Park brontosauri and Wonder Woman theatrics? 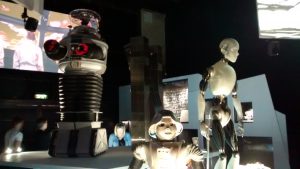 Having chilled down a bit picking my way through the dark twilit world of the Curve Gallery corridor I feel sufficiently revived to make a return back out into the heat of the bright city light.  And so, after another couple of steamy tube rides, I’m headed off to the Serpentine Gallery, not to join the absurdly long queue of people lined up to see the Grayson Perry pottery show, but for a quick peek at this year’s outdoor pavilion commission.  And, without wishing to appear to damn with faint praise, I guess I’d have to say that it sort of looks ok.  Most of the architects that get to have a go at putting up these temporary gazebo shelters seem to go to great efforts to try to show how complicatedly clever they can be in erecting absurdist structures designed to dazzle the eye and surprise the sensibilities.  But this time Francis Kere has taken a more considered and sensible approach and put together a sort of simple stack of wood and metal poles to create a very reasonable, unflashy kind of a structure that offers suitable shade from the sun for today’s visitor and hopefully similar protection from the showers that will inevitably be following in the weeks to come.  I’m not sure in today’s climate whether such a humble, unambitious approach to solving architectural problems will endear him to future clients but I for one appreciate the gesture. 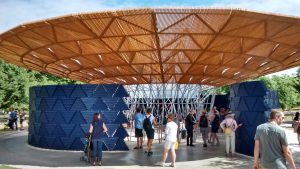 And so to Exhibition Road and the final gentle downhill trudge to the Victoria & Albert Museum and regular readers may recall that a couple of blogs ago I made mention of the fact that work was nearing completion on some internal redevelopments being undertaken here.  Employing the typical light sarcasm with which I endeavour to pad out these paragraphs of persiflage, I suggested that when the hoardings came down there would doubtless be revealed a new café and a shop but I also hoped that the architects would not forget to add in some additional exhibition space.  Well, the bandages are now off and, having visited, I can confirm that there is indeed a new café and a new shop all brimming full with eager touristic consumers.  And I’m pleased – not to say even a little surprised – to be able to report that there is also quite a reasonably large-sized new underground exhibition space entitled the Sainsbury Gallery.  But what is the opening exhibition with which the curators have chosen to launch this exciting new venture?  Rather bizarrely, it seems that those in charge appear to have been so distracted with the other more important aspects of the redesign that there is in fact no show – it’s just an empty hall containing one very bored invigilator watching a handful of confused people walk round wondering where the art and artefacts are.  I did ask and apparently there will be temporary exhibitions in due course.  Of course, the Museum’s new director, Tristram Hunt, is better known as being a failed Labour politician with no experience of museum practice or curation so maybe we are merely witnessing an early example of his lack of experience and I’m sure he’ll soon get the idea and realise that a museum is meant to…oh well, I think I’ll just give up on the sarcasm, sometimes I just can’t hope to compete with the absurdity of situations in the real world where emptiness is considered a suitable choice for the inaugural exhibition in a brand new gallery space. 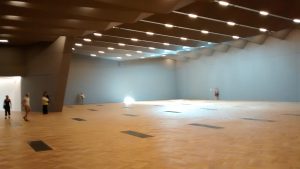