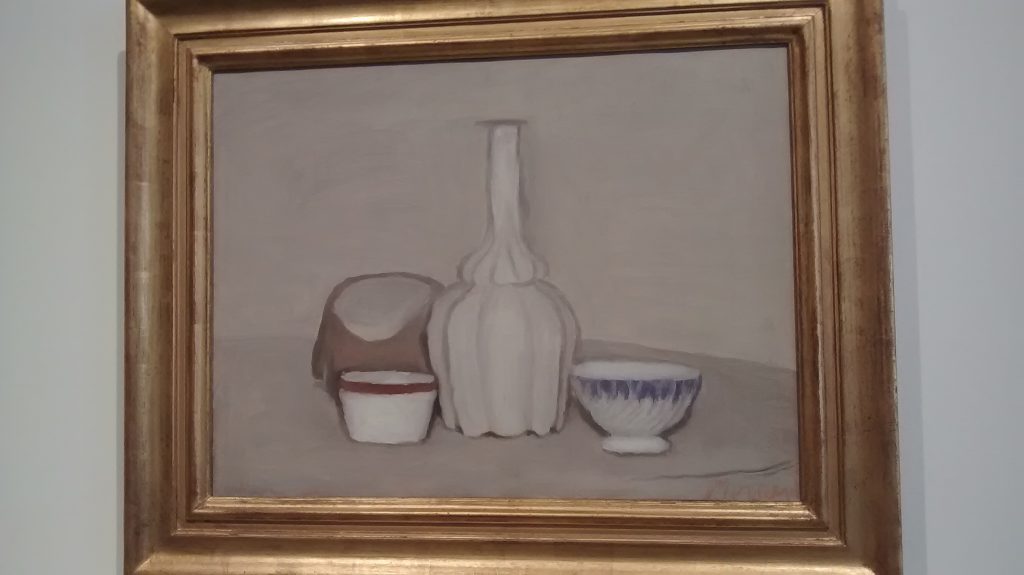 Get the tube to Oxford Circus where, surfacing to street level, I find that the weather dial is still stuck on summer and the sun continues to emit its pulsating streams of hot yellow beams, the trajectory of which remain unimpeded by any chilling cloudy cumuli.  Today, however, there does seems to be some slight meteorological turbulence in the upper troposphere which has resulted in the light breeze that wafts its winding way in my direction, with the consequence that I’m met by a sufficiently cooling contraflow coefficient such as to make strolling the streets a not entirely unpleasant indulgence.  It’s a situation enhanced by the fact that I’ve got no specific sequence of museums or galleries to visit but, instead, intend to make up an ad hoc itinerary guided by happenstance alone, in the hope that fortune will happily reward my faith in following the unplanned route.  And so it is that I turn away from the capital’s main shopping thoroughfare and slip into Dering Street, leaving behind all the excited groups of out of town tourists and desperate consumerologists, in order to enter the parallel purlieus of the mighty city’s artworld alternative.  First stop is Annely Juda Fine Art, a well-respected and trusty venue that can always be relied upon to offer up something worth looking at…except for today.  A situation explained by the smiling receptionist who advises that there’s nothing to see since the gallery is currently undergoing the hibernating hiatus that occurs between shows.  Evidently the pretty Prunella Clough abstracts from the last show are all now safely boxed away and the staff are soon to depart for their hols until the gallery reopens in September with a showing of some of Sarah Oppenheimer artwork installations. 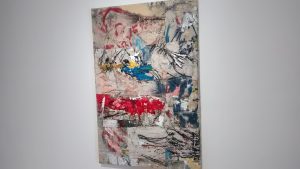 Oh well, perhaps not the best endorsement of my idea to let serendipity be my guiding compass but luckily I can see that Vigo, the gallery next door, is open for business and so decide to take a look in there.  Pushing open the door, I’m immediately hit by one of those Proustian madeleine moments in which I’m metaphysically transported back across the decades to that prelapsarian period before artists started to bisect baa lambs, paste butterflies into patterns and offer up their unmade beds as expressions of creative ingenuity.  Yes, even in my lifetime, there was still a period when the term artist was synonymous with that of oil painter and entering a studio or gallery would often result in being smacked in the nostrils by that odd, greasy perfume indicative of recently completed artworks where the slow drying paint was still emitting copious fumes of sticky solvent residue.  In fact, the small show here is a mix of both paintings and collages and I can’t actually locate any heavy impasto daubings so assume that these are either hiding in a back room or maybe my nasal passage have started to go a bit wonky.  No matter, the works here look better than they smell and are apparently loosely centered around the theme of carnival, although perhaps only Daniel Crews-Chubb’s abstracts convey anything of the noisy hectic vibrancy of an actual masquerade.  Which is not to say that Caroline Achaintre’s wool and fabric constructions, Zak Ove’s mixed media sculptures and Che Lovelace’s simple portraits are not all reasonably attractive in their own understated way. 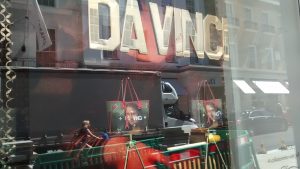 Walking on southwards down Old Bond Street I get diverted from the true path of fine art exploration by the attention-grabbing window display that fills the front facade of the Louis Vuitton luxury goods store.  Specially designed to show a series of handbags decorated with details ripped from the old master paintings of old masters such as Leonardo, Titian, Rubens, and Fragonard, this is the work of that young master of self-promotional branding, Jeff Koons.  And it’s interesting to think that while Warhol started his career as a commercial artist, creating the window display at Bloomingdales, before going legit and entering the world of the fine art production, Koons is quite content to pursue the same path but in completely the reverse direction. 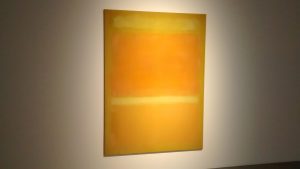 Although, in retrospect, perhaps this is being a bit unfair on Koons, since Warhol himself was happy enough to re-embrace commercialism when performing in tacky TV adverts towards the end of his career.  The ramifications of which I ponder as I take the short walk on to Cork Street and relocate from the ridiculous to the sublime as epitomised by the current sweet little show at Nahmad Projects.  There are only three artworks included in the exhibition here but this really is a proper case of sensible restraint ensuring that less really does mean more.  A single very lovely Rothko in tones of honey and lemon is allowed an appropriately respectful amount of room to disperse its mellow tonal combinations across the room where they are met by a similarly subtle holographic blue lightwork from James Turrell.  As for the completion of this happy triumvirate of subtle sensual delights, that comes by way of the somewhat more arcane background musical soundtrack accompaniment from the aleatory end of the John Cage playbook.  More specifically, this acoustic treat consists of a taped loop of seven randomly selected piano notes matched, of course, by the equally important seven accompanying silent intervals. 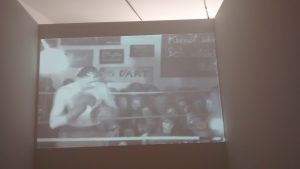 And it’s with this vibrant jingle ringing in my ears that I make my way towards the other end of the street and Waddingtons, which has decided to draw attention to one of the lesser known episodes of silliness that make the history of Modern Art such a fascinating story to follow.  I suppose most people are probably aware that the great self-styled shaman Josef Beuys was won’t to engage in all manner of mystical symbolic exercises, from draping himself in raiments of felt and fat to planting forest of oak trees, and from encaging himself in debate with a live coyote to filling up chalk boards with notes from his pedagogical performance pieces – but who knew of his pugilistic past?  I certainly didn’t and so am hugely grateful for this current display of archival material – posters, photographs, boxing gloves, a scratchy black and white video film of the fight – that confirms the artist did indeed go three rounds in the ring, all for the sake of acting out some essential piece of conceptual nonsensicality.  Even with my very limited knowledge of boxing technique, I can tell that Beuys didn’t really have much idea of defensive strategies and that his opponent deliberately threw the match by declining to take the very obvious open opportunities to give the artist a good thumping round the head. 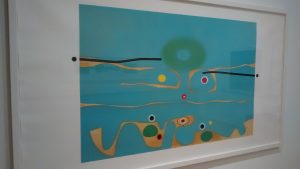 Which, makes me daydream about all the current contemporaries I’d quite like to biff about the bonce provided, of course, they too were as hopelessly inept as Beuys in offering up any forms of resistance.  It’s certainly a more cheering form of thought experiment than any of the other, usual celebrity chestnuts about which specific luvvies one would wish to invite to a dinner party, desert island or Twister tournament.  Having mentally floored various politician, TV newsreaders and sit-com stars my reverie ends on entering Marlborough Fine Art for an exhibition of works by Victor Pasmore.  Here, I think, is an artist that probably perfectly bisects opinion between those who feel that he presented a particularly refined form of abstraction with a charming, delicate sensibility, and those who think he was a terrible old hack who, having hit on a distinctive simplistic style, got stuck churning out endless variations of the same small themes.  As for my own personal thoughts, I’m a bit undecided.  Usually when I see any Pasmore prints or paintings they always look pretty good at first sight but then the feeling tends to wear off quite quickly, and seeing two or three together usually just highlights how limited were the small range of stylistic tricks that the artist used to grab the viewer’s attention which he couldn’t then hold.  I suppose what I’d really like to help me make up my mind is a full retrospective curated by someone who could show how the artist developed his themes over time but, sadly, neither the Tate nor Serpentine nor any of the other publically funded galleries seem very interested in putting on shows like that any more.  I guess the institutional directors have difficulty finding the funding for researching and producing proper historical reviews or else are just more interested in enjoying the glamorous side of promoting trendier, more fashionable younger artists.  Either way, the Marlborough show presents a more varied mix of the artist’s work than one usually sees and offers up quite a good case for the defence.  And I suppose I exited the show willing to raise Pasmore up a couple of notches in the rankings while still keeping him firmly placed towards the lower end of the second division. 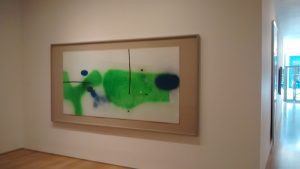 Finally, after backtracking a couple of streets I get to clamber up the stairs and into the charming space of the Robilant & Voena gallery which (following on from last week’s dip into the Italian Modernist displays at the Estorick Collection) is presenting a small but comprehensive display of paintings by Giorgio Morandi.  Alongside the familiar pale chalky pictures of simple still lifes of little pots and vases are some of the less well known landscapes of trees and houses.  The artist’s approach to tackling the problems of representing both quite different genres using the same, unvaried technique makes me think of Cezanne’s similar commitment to streaking slashes of paint whether representing Mt St Victoire or a bowl of apples.  The relative success of both artists perhaps confirms the truism that, in matters artistic, it’s not so much what you paint as how you paint it.  And, in matters of rambling, it’s not just the destination but the stops you make along the way.. 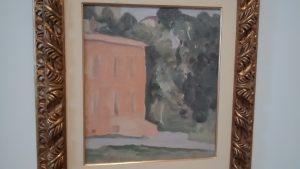