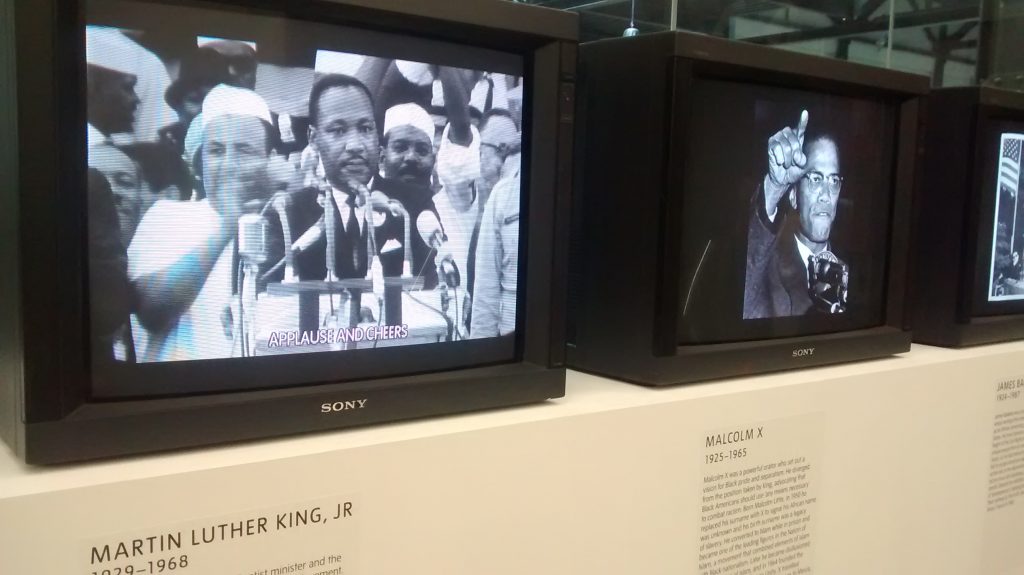 Get the tube to Southwark and then walk down to Tate Modern to take a look at the big new exhibition that’s recently opened there and which is entitled Soul of a Nation:  Art in the Age of Black Power.  So, whose soul, which nation, what age, what power?  Well, as the accompanying gallery leaflet helpfully tries to explain, the exhibition aims to ‘…celebrate(s) the work of Black artists working in America in the two decades after 1963.’  Now, without wishing to appear to be unnecessarily picky and pedantic, I think that maybe had I been the copywriter called upon to draft out this particular piece of introductory text, I’d have substituted the word ‘commemorate’, for that of ‘celebrate’.  It just seems to me to be a more appropriate verb to use in consideration of the art produced during the turbulent twenty years in which the curatorial team have chosen to frame their chronological review.  The point being that the idea of a retrospective celebration tends to carry with it the suggestion that the original period was one of unalloyed happiness, good cheer, and all round successes, and I’m not sure that would be an entirely accurate representative picture of the state of the nation for Black Americans during that conflicted time, whether they were artists or not. 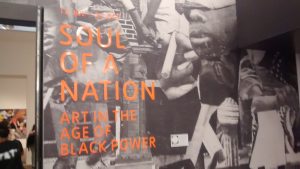 Although, at this point, I suppose I should start laying down a few caveats about my position when it comes to trying to blog about this particular show, starting off with a generalised declaration that my knowledge of this period of North American history is probably about as sketchy as that of the average 60-plus-year-old Brit.  Which means it’s pretty thin.  Of course, these days when it comes to reviewing, or producing any other digitally distributed media diatribes, mere ignorance of the specifics of the subject is hardly considered to be any handicap at all.  Nevertheless, there are very obvious references to matters of ethnicity in this show and that tends to be a subject area requisite of recognising more specific sensitivities.  And so, having already introduced the subject of personal demographic profiling, with reference to my age and nationality, it seems only reasonable that I should further declare that I also fall into those other societal subdivisions of being middlish-class and definitely on the pastier side of the Caucasian demographic quotient.  In short, I suppose some might see me as symbolic of an elitish intellectual white establishment utterly unable to relate to the quotidian experiences of oppression suffered by America’s ethnic minorities – then and now – and so, consequently, totally unqualified to comment on the arguments and achievements of any of the artists in this exhibition, and equally unable to offer any pertinent commentary or aesthetic analysis of any of their works. 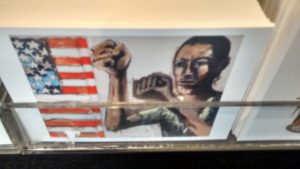 And, frankly, I think they might very well have a point.  Indeed, I’d be tempted to recuse myself and stop writing right here, right now were it not for the case that, in addition to all the other autobiographical descriptors listed above, I’m also a member of that half of the populace gifted with a pair of neatly matching gonads.  And so, stale, pale and male, nobody will be surprised to learn that, having impartially weighed all the evidence, I have concluded that, regardless of any personal cost or inconvenience, it’s almost certainly in society’s best interests for me to retain the historical entitlements associated with my gender and continue to spout opinions about all and any other subject under the sun, including matter artistic.  And so that is what I propose to do. 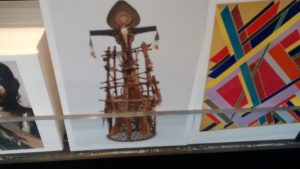 Having got all that out the way, and having hopefully just about managed to walk the tightrope between PC prattishness and smug virtue signaling of the nobility of my liberal credentials, it’s still not quite time to push open the doors and start the journey of looking into the dozen rooms that make up the display here.  For, just by the entrance to the show, is a small display of TV screens showing black and white film clips contemporaneous with the times to which the show pertains.  Of course, it’s not uncommon now for galleries like the Tate to use various time-line graphics and other didactic design techniques – archival or otherwise – to provide its audiences with some instructive contextualisation of their exhibitions.  What’s striking here, however, is that these short documentary excerpts are so powerful and make such a compelling watch that, in retrospect, they come across as a sequence of much stronger and more evocative visual referents than any of the other paintings, sculptures, photographs or general ephemera that fill up the walls and floors of the actual exhibition spaces. 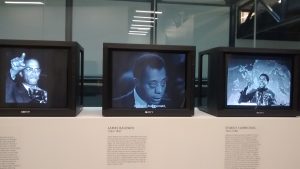 Like most people, I’ve heard the sections from the speech that Martin Luther King delivered next to the Lincoln Memorial in Washington in which he talked of his dreams for the future.  And, I assume, like most people, I find that his rich, powerful voice, full of such intensity, integrity and emotional substance, still carries an incredibly powerful punch, made almost unbearably poignant for contemporary viewers by the knowledge that this most awesome of orators was to have his life cut  so cruelly short by the pitiless precision of the assassin’s bullet.  Amongst those joining King here on this retrospective podium, and complementing the grandeur of his Old Testament prophesying, are two equally charismatic apostles of revolutionary change, Malcolm X and James Baldwin.  Even now one can sense their charismatic appeal and it’s easy to imagine how their sharp suits and even sharper rhetorical blasts must have similarly electrified and inspired their audiences half a century ago. 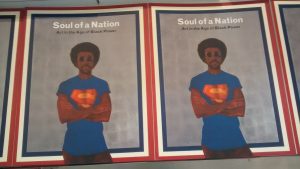 These are the hardest of acts to follow.  Indeed, while there is much of interest to see once inside the actual exhibition rooms, this has to be one occasion where the visual artists – even those with a fairly precise message to impart – struggle to stir up anywhere near the same emotional shiver as their TV evangelist brothers.  Some perhaps get close and I suppose that it’s around this point that I would usually start listing half a dozen exemplars whose names alone would be sufficiently familiar to delineate some of the thematic threads and painterly ideas that hold this show together.  Unfortunately, I have to admit with a sort of awful, toe-curling ironical horror, there is only one single, solitary artist among the 60 or so with work in the exhibition whose name is likely to be universally familiar to the general gallery going public – and Andy Warhol is even whiter than I am.  I’ve no idea for the logic behind this curious example of tokenistic inclusion except to say that his screen print of Muhammad Ali, unlike its subject matter, looks to be rather unexceptional.  As for the rest of the portraiture, there’s some ‘60s psychedelic stylisations and much is a bit run of the mill.  Exceptions come in the standout works of self-portraiture by Barkley L Hendricks completed in a snappy graphic style that really should ensure his inclusion into any future Pop Art surveys.  That the artists has decided to strike such a confident pose – donning a Superman T-shirt while discarding the traditional heroic tights – makes it open to the kinds of cultural readings and interpretations beloved by analytical deconstructionists.  Rather more damning and direct are the sculptural collages of Betye Saar who similarly use the Pop idiom to shock, satirise and then subvert some of the stereotypical racist imagery of the time.  So, a banjo case decorated with a grinning minstrel on the outside, opens up to reveal the ghastly horrors of the lynch mob’s strange fruit within and, in another instance, smiling Aunt Jemima finds herself fully prepped and armed with a broom in one hand and a rifle in the other. 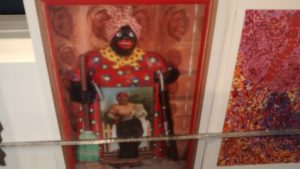 Not all Black artists of the era dealt directly with racial themes and there are, for instance, some straightforward Abstract Expressionist works, like the geometric patterning of William T Williams that would not have looked out of place in last year’s Royal Academy survey show.  Similarly, from a distance Norman Lewis’ black and white paintings have an elegant pared down quality and intensity matching anything produced by fellow achromatic artists like Franz Kline or Robert Motherwell.  It’s only on closer inspection of a work like America the Beautiful one notices that hidden amongst the flickering flecks of paint are the semi-submerged symbols of KKK capes and crucifixes. 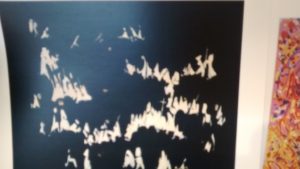 Why are all these artists, not to mention their other brothers and sisters revealed in this exhibition, so unfamiliar?  It would certainly be easy enough to blame the institutional racism that permeated American culture during the last century.  Just how much things have changed within the new century, I’m not sure but I kind of think that recent events suggest the dream evinced in that famous King’s speech is still as far away as ever.

One response to “On the Pastier Side”