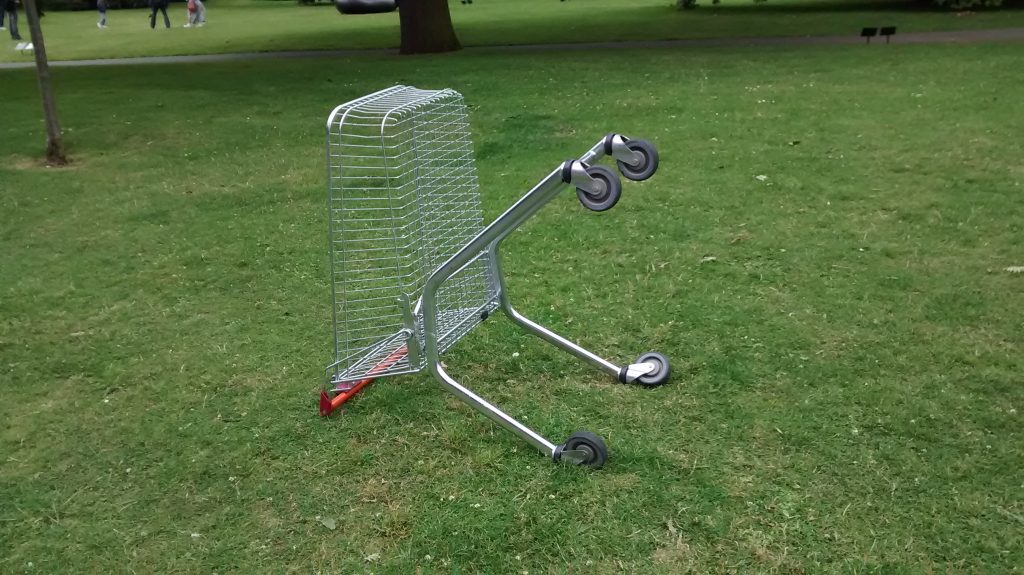 Down to Regent’s Park tube station and then take the short walk to get into the grounds of the princely Park.  But grizzly grey clouds are starting to gather above and I can’t help thinking that I may have picked the wrong day to step outside the safe-zone sterility of the climate-controlled, air-conditioned, light-monitored, dehumidified, semi-sanctified white cube that is the more normal, comfortable habitat favoured by denizens of artworld exploration, such as myself.  No matter, there are occasions when one must throw caution to the winds and, in the spirit of Scott, Livingstone, Franklin and Captain James T Kirk, boldly go forth, even at the risk that getting caught by what looks to be an imminent potential downpouring may very well permanently remove the shine from my recently purchased pair of jaunty summer espadrilles.  But such are the dangers of embarking on the al fresco art expedition.  Nevertheless, fortune tends to smile on the brave-hearted and, aided by the technological wonders of my interactive google map gizmo, I get off to a good start, managing to take the right pathway turn that quickly leads me to Urs Fischer’s Invisible Mother, the first artwork on the list of specially selected items making up this year’s display of Frieze Sculpture sculptures.  This comical creation is a sort of daft, Surrealistic water feature in which a fountain endlessly spatters down its dousing droplets upon the collapsed form of a skeleton that’s helplessly sprawled over a straight-backed chair. 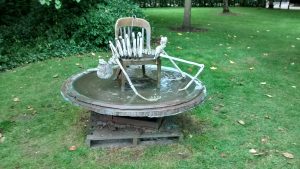 As I think I may have mentioned already, the skies are darkening and, since there are another couple of dozen artworks to locate amongst the distracting arboreal splendours, tailored lawns and verdant shrubbery that surround me, prudence determines that it would be unwise to linger too long in front of this curious conceptual ice-breaker in an attempt to decode its metaphysical message of spiritual enlightenment.  That, and the fact that I’m not too sure there actually is a message encapsulated within its brass metallic frame.  Indeed, I think that, like so much of what passes for cutting edge contemporary art, this fanciful confection probably falls within the general category of Post-Post-Modernistic frivolity, where art, like advertising and architectural ornamentation, is designed merely to provide no more than a fleeting sensation of wry amusement wrapped up in a package of transient visual distraction. 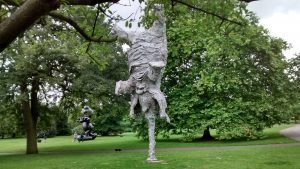 Of course, the levels of sophistication of these titillatory jeux d’esprits vary, with some being decidedly more trite and trivial than others.  Hank Willis Thomas’ Endless Column, which consists of twenty-two Fifa footballs balanced vertically on top of each other is, I assume, a sort of silly, laddish jibe against the famous Brancusi’s original.  But the prize for weakest work on show must go to Miquel Barcelo’s Gran Elefandret, in which an upturned pachyderm balances on the tip of its outstretched trunk.  I suppose, at a stretch this could be referencing the spindly-legged elephants that Dali paraded through some of his paintings but I think the sensibilities are probably closer to the childish banalities of the circus world of Jumbo, Nellie and Dumbo. 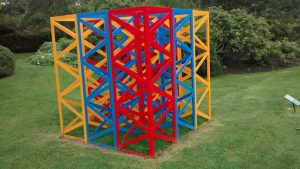 As for the slightly more serious Pre-Post-Modernist works on display here, I quite liked the colourful geometric minimalism of Rasheed Araeen’s Summertime; the swirls and sweeps of Tony Cragg’s Stroke; the rusty steel heavy metal abstractionism of Anthony Caro’s Erl King; and, best of all, Bernar Venet’s accurately titled 17 Acute Unequal Angles.  Judging by the giggles and shrieks, and the smiles on the kids’ faces as they clamboured all over this happy example of Euclidean expressionism, I think this last work will also have won the votes of the youth demographic who merrily risked impalement having ignored the many injunctions placed by the sculpture specifically advising against their exuberant vandalistic exertions. 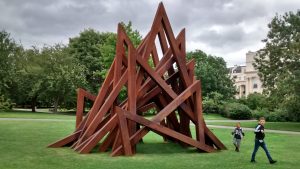 Whether any of these fairly formal formalist works gain anything very much from being transported away from their natural environments – wrapped in bubble wrap and stuck in a storage container or proudly displayed in the foyer of an upmarket office block – I’m not sure.  But I suppose the contrast of their random colouration and obviously factitious formulation against the grassy greenery-yallery of the Park’s natural world organic attraction serves its purpose as a sort of free, open-air taster forewarning visitors that the main, horribly expensive annual Frieze art fair extravaganza will be opening up nearby in a pair of massive tented arenas later in the year. 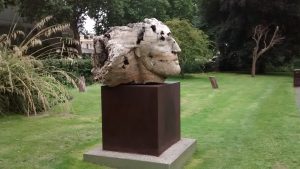 The solitary work that I think could possibly remain in situ after all the others have been packed away at the end of summer and look appropriately site-specific, as if it had actually been created with its outside surroundings in mind, is, perhaps unsurprisingly, the single example of a traditionally carved ornament.  Emily Young’s Planet, a sort of slightly distressed head stuck on a plinth, has a sort of mythical, timeworn aura that hints back to the charmed arcadian past that perhaps resonates in most of us when we get the chance to turn off the capital’s urgent urban streets and walk through the relaxing avenues and open spaces of the royal parks. 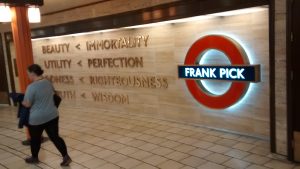 After which I must return underground to check out a couple of tube stops that have also been highlighted alongside the Frieze Sculpture show in the Transport for London Summer Art Map which is directing my journey today.  First off is Langland & Bell’s curious memorial to Frank Pick, the man responsible for much of the famous Underground brand designs including the typefaces and fonts used to announce the station names.  Sited in Piccadilly station, the artwork consists of one of the tube’s familiar bullseye roundels enclosing Pick’s name, alongside a sequence of propositions picked out in bronze letters that are presumably meant to echo the designer’s defining tenets and sentiments.  In fact, the little arrow symbols seem to have been inadvertently inverted to announce that ‘Immortality is greater than Beauty’, ‘Perfection greater than Utility’ and so forth.  Oh well, I expect TFL will notice what I take to be an unfortunate typo and get it corrected one day, in the meantime I’m off to Tottenham Court Road.  Here the famous Paolozzi murals have been joined by some decorative design work by Daniel Buren who is described, perhaps a little hyperbolically, in the Art Map guide as ‘France’s greatest living artist and one of the most significant contributors to the conceptual art movement’.  I suppose the large coloured squares and circles set against a background of thick black stripes are pleasant enough but can’t help wondering what conceptual statement they are meant to be making, unless it’s some kind of subliminal messaging from Specsave encouraging us all to make an appointment at the opticians to test for colour blindness and astigmatism. 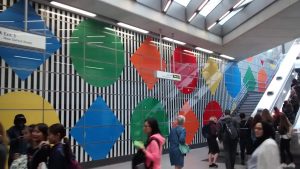 And so on to Bank Station with the intention of looking at the nearby public sculptures by Damien Hirst, Ryan Gander and others that are also mentioned in the Art Map.  But now when I emerge into the open air the rain is really crashing down and I can’t quite manage simultaneously to hold up my umbrella while map reading my way to finding these treasures.  So I give up on that idea and go for plan B which involves a quick dash along a simpler route that takes me into the sedate and definitely drier surrounding of the Guidhall Art Gallery.  I picked up a flyer the other day promoting some kind of print show here but having arrived there doesn’t seem to be any indication of where it might be located so I give up looking for that and just go for a warming meander amongst their permanent collection of soppy comforting Victorian paintings.  Subdivided into section with titles such as Love, Beauty and Faith, the panoply of figurative portraits and narratives has a charming, if perhaps naïve, simplicity that always seems to be reinforcing the certainty of a straightforward moral code based around Christian principles, wherein goodness is synonymous with beauty and virtue is rewarded while dishonorable behaviour is punished.  So, whether it’s a pair of young ladies lolling about arranging a bouquest of flowers, a pair of sweethearts subtly spooning in front of their chaperone or Clytemnestra, with a mad look in her eyes holding onto her hatchet that drips blood, there’s little room for ambiguity when it comes to picking the superior sheep from the ghastly goats. 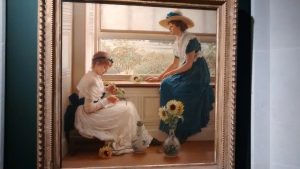 The precision of the painterly technique used to represent all these scenes perfectly matches the unequivocal nature of the sentiments that gave rise to all the obvious moral narratives, and undoubtedly produces pictures that are initially rather appealing, especially in small doses.  But it also shows fairly clearly why the later, much more ambivalent, styles of art – from Impressionism to Futurism and Cubism to Surrealism – seemed so much better able to reflect the ambiguities, uncertainties and paradoxes of the modern world that was to come along and comprehensively sweep all the old stuff away.  And with that final thought I exit back outside, pleased to find that the rains have departed and my journey home shouldn’t be too unpleasantly soggy.