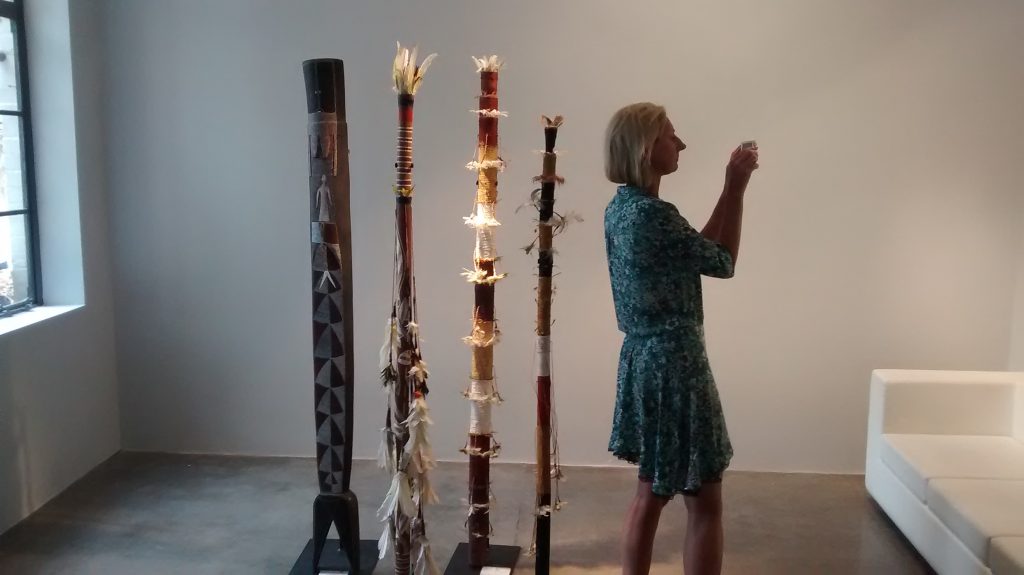 To Tottenham Court Road tube station and then take the shortish walk round the corner to get to the British Museum.  I had wanted to take a look at the exhibition here of Hokusai prints which has been getting rave reviews but, checking it out on the Museum’s website yesterday, I realise that – drat and double drat – I’ve left it too late.  While the show’s still got a week or two to run, apparently all the tickets for the pre-timed slots are already completely sold out.  I suppose that any absolutely desperately dedicated fan of the famous Japanese master, who simply must get to see the show, could try queuing up first thing in the morning for returns or else have a go at tempting the attendant on the door with a little baksheesh backhander bribe…but I think this kind of behaviour is probably frowned upon at the Museum.  Although, in what might be seen by some as a slightly sneaky marketing ploy, the website does explain that were one to join up to the Museum’s official membership scheme then things might be different.  In the same way that the maître d’ of a swanky restaurant can somehow always manage to create that little bit of extra space to find a table to accommodate the unexpected arrival of suitably important celebrity guests and their entourages, should you shell out to become an official Museum member then the additional extra room necessary to squeeze yet another person into the already bulging exhibition space containing the Hokusai collection will apparently instantly materialise itself. 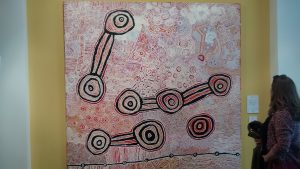 Oh well, it seems to me that £64 is a bit steep to gain membership to a sardine club, no matter how oily and attractive the potential cultural benefits, so I decide to pass up on that particular offer.  And since I recall having been to an extensive show of Hokusai prints about twenty or thirty years ago at the Royal Academy, I can already boast that I’ve seen all his best stuff at first hand anyway.  And, from memory, I can also confirm that the famous great curling wave does look quite magnificent, and the blossoming cherry trees and views of Mount Fuji are all beautifully executed although, I confess, I found the curious erotic fantasy scenarios of geishas enjoying congress with giant squids and other denizens of the deep perhaps just a little too exotic for my own personal culinary tastes. 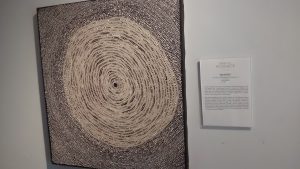 For those unable to get into the show, I think they might reasonably comfort themselves with the thought that while it’s always nicer to see any well-promoted arty artefacts in their original format, there’s also a depressing downside associated with going to any of these kinds of blockbuster shows, especially when they develop a bit of a buzz and so become excessively popular and massively oversubscribed.  And that, simply put, is the hell of other people, especially when there are always so very many of them, all of whom seem to be intent on working in concert with the sole intention of deliberately trying to block me from getting a decent view of what’s going on.  Even on those rare occasions when, by careful manoeuvering, one finally does manage to get into the right position to get a proper sightline on the art, there’s never then seems to be sufficient time to take a fully considered look before someone else edges in front or nudges one aside.  And since it tends to be the tiniest, oldest, frailest and most elegant looking among the army of little gray haired old ladies and gentelmen who have the sharpest elbows and engage in the heaviest barging, propriety makes it’s hard to retaliate and push back without appearing to be a complete and utter cad. 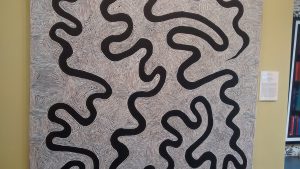 Consequently, I think that the best way to refamiliarise oneself with the works of the great oriental printmaker is probably just to scan through the exhibition catalogue and then, if one wants to engage in a more fulsome and intimate study of the tsunami or seafood attractions, buy the relevant postcard, commemorative mug or whatever other souvenir chattel takes one’s fancy.  Anyway, that was my plan – to go to the ground floor gift shop and take a look at the Hokusai stuff that I wasn’t going to get to see, before heading off to take a look at a different, free show of watercolours up in the fifth floor print room.  Having received barely any publicity or promotion, this show – the latest in the Museum’s rolling run of exhibitions drawn from specially selected portions of their massive permanent collection of works on paper – looked to be particularly deserving of review.  Places of the Mind is billed as offering a look at how artists have used an evolving variety of styles and techniques to represent the British landscape during the tumultuous hundred years from the death of Turner in 1850 to the height of the Neo-Romantic era that briefly flourished in that fascinatingly austere post-war, pre-Pop interlude.  It’s a subject that strikes me as one that could have the potential to provide both emotional and intellectual interest; to offer that winning combination of retinal and cerebral stimulation; and to display stuff that both looks good and also makes one think a bit about the changing nature of nature, art, life and all the stuff in between. 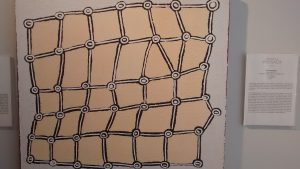 But not today.  It seems that sometime during the course of the last week I must have walked under a ladder or committed some other kind of foolish karmic indiscretion such that an audit of the mighty ledgers of moral reckoning reveals my fortunes to have been pushed into the red columns that deliver only disillusionment and disappointment. The point being that as I approach the mighty and majestic portals of the British Museum I can see that there’s a bloody great queue of people weaving their way through the security scanning tent at the approximate pace of a desperately debilitated snail.  And a quick mental arithmetic estimate of the forward velocity of this sad, gastropodically slow-moving line of humanity suggest to me that it would take at least half an hour or more of tedious shoe shuffling to get anywhere near to the art and though I’m renowned for my patience, serenity and general calm acquiesence to life’s trials, tribulations and…oh, sod it, I’m not waiting that long, I’m off… 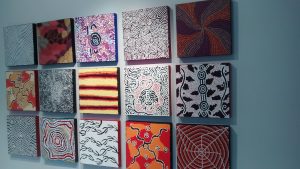 And so it is that I find myself on the other side of Tottenham Court Road at the Charlotte Street gallery belonging to that doyenne of London’s cultural hub, Rebecca Hossack.  Those familiar with her trio of galleries will know that shows displayed within these walls and floors tend to be reflective of the eclectic tastes of their eponymous proprietress.  So, when it comes to the regular displays of work by British artists, items lean towards the figurative, decorative and quirky rather than the fashionable, cerebral pomposity that so often adheres to the abstract, minimal and conceptual.  But what further separates the Hossack selections from the rest of the capitals showrooms has been her consistent championing of the art that originates from her own native lands on the other side of the globe.  So it is that tradition dictates once a year the daring galleriste steps out of her normal couture stylings, ties up her hair, puts on a pair of Blundstones, grabs a backpack full of VBs and Four’N Twenty pies, saddles up her favourite kangaroo and hops out into the wilderness to commune with her tribal brothers and sisters amongst the Aboriginal community of outback artists. 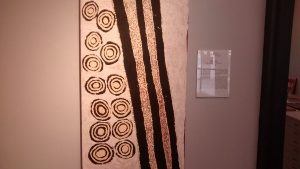 The fruits of these encounters are then loaded up and transported through creeks and billabongs and across deserts and oceans far away from their antipodean origins to be displayed in the serene surroundings of Rebecca’s London boutiques.  As can be seen from the pictures I’ve carefully placed throughout this blog, at first sight the simple, repetitive elements of line and dot patterning suggest that these paintings are a form of very attractive if somewhat naive geometrical abstractionism.  But, in fact, things are a good deal more sophisticated and complex than that, and the arrangements of shapes and colours far from being determined by random association are very specific representations that mix precise topographical representation of local landscapes alongside idiogrammatic formulations of the specific mythological parables associated with those locations. 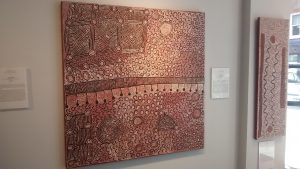 I tend to think that being aware that there’s a complex, credible, time-honoured cultural backstory underpinning the derivation of these paintings imbues them with a sort of validity, both intellectual and spiritual, that raises them above what might otherwise be categorised as mere examples of pretty decorative ornamentation.  Nevertheless, reclassifying them into that far more noble taxonomic phylum of the official, accepted, bona fide artwork is perhaps not entirely unproblematic either, since the Aboriginal cultural history and lived experiences that gave rise to these paintings seems to me to be of such a paradigmatically different structure to that of the typical western world model that it’s going to severely limit any kind of sensible sense of meaningful comprehension – at least, it is by me.  Does that then automatically devalue the worthiness of the artwork?  Well, there are certainly counter-arguments to the ones I’ve outlined above although, sadly, a lack of space is going to prevent their rehearsal now.  Suffice to say that I’ve discussed them with Rebecca over the past thirty-odd years of our friendship without ever reaching any form of resolution.  Although I would point out that the fact that in the past I’ve actually bought a couple of Aboriginal prints from her should not in any way be read as an acceptance that she has the upper hand in the debate but more a measure of the skill and indefatigability of her sophisticated selling techniques. 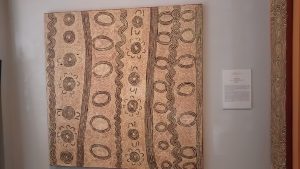