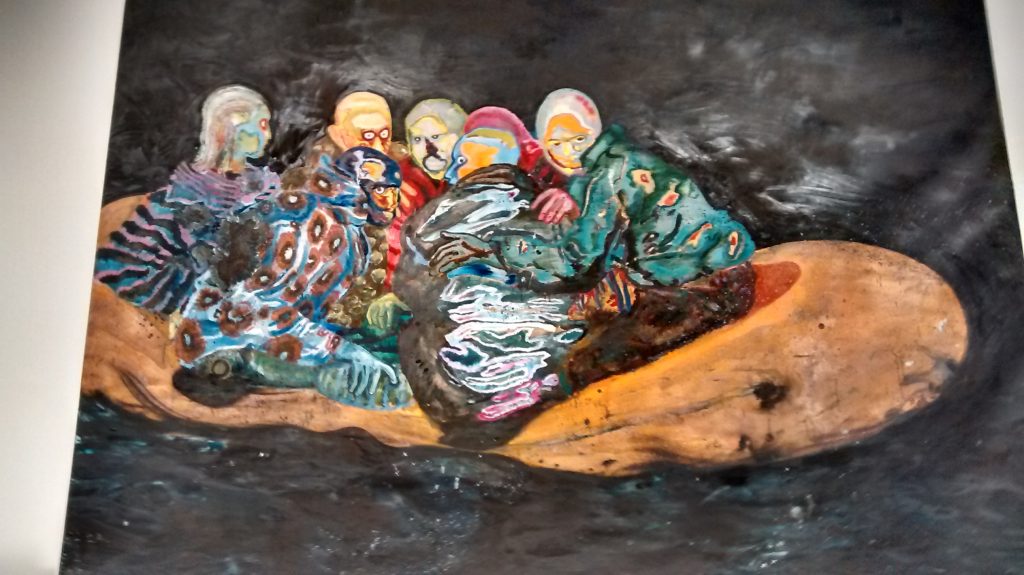 Take the tube out to Finchley Road and then walk up the hill to get to the Camden Arts Centre.  And here the main galleries are filled not with the usual rather self-consciously modish video displays, installations or mixed-media sculptural-cum-bricollage site-specific whatnots, with which so many of the non-commercial, grant funded galleries seem so often to pad out their walls and floors.  Instead, there’s a sort of old-fashioned, straightforward mini-retrospective of paintings created over the past fifteen or so years by the German artist Daniel Richter.  At which point those in the know – and those who aren’t in the know but don’t wish their peers to know that they’re not in the know and so choose to try to keep things that way by engaging in a little bit of innocent, mild-mannered bluffery – will doubtless be nodding their heads and emitting murmurs of approbation indicative of the consensual opinion that this artist has rightly, if belatedly, been given the opportunity to more fully show his work in this country.  The rest of us will perhaps feel our cheeks start to redden as we put up our hands and hang our heads in shame and have to admit that, despite the claim on the promotional material accompanying the exhibition asserting that Richter is ‘regarded as one of the most important painters of his generation’, we’ve never actually heard of him before, let alone seen any of his works or have any idea of his place within the great schemata of contemporary art historical narratives. 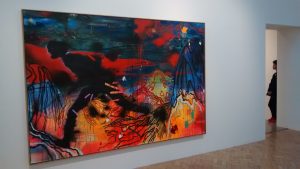 Now, for pontificators like myself, who tend to think that we have not just our fingers on the pulse and our ears to the ground but all of our other anatomical bits resolutely tuned in to the continually evolving ethereal trends of the civilizational zeitgeist, this is all a bit disarming.  And I can’t help wondering that if Richter really is generationally important how come he’s never managed to give rise to even the smallest blip or tiniest ping on my own cultural radar screen detector.  However, in mitigation of my personal failings to register Richter as even a small bump on the seismic scale, I do feel obliged to point out that for someone who is apparently acknowledged as a notable luminary within the starry artistic firmament, he’s got a pretty small media footprint, certainly as reflected by the somewhat diminutive size of his Wikipedia entry.  And that browsing through the contents of said digitised biography reveals that none of his artworks is held in any British public art collections and neither does he have commercial representation in this country, a fact that perhaps explains why, as far as I can tell, he’s only ever shown work once before in a gallery over here.  All of which makes me think that maybe there’s just a little bit of promotional hype going on here and that perhaps my own lacuna is not that great after all. 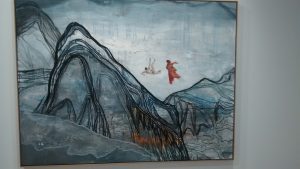 Having said all that, I suppose it would now be very much in keeping with the populist propaganda of our times to denounce the opinions of the experts who have placed Richter within the Pantheon of artistic pertinence and declare that he is a duffer and second-rater and utterly unworthy of our attention.  Temptingly tendentious though it might be, it would, however, be disingenuous as a quick scan round the exhibition soon reveals that here, in fact, is an artist who has a very obvious talent and indeed is blessed with a mastery of that tricky skill set required to apply paint to canvas in such a way as to create a series of colourful images that grab the attention, hold it and then compel the viewer to pause and take a further, more considered look. 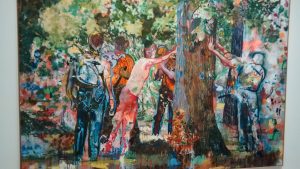 So, what are Richter’s pictures like?  Well, in technical terms, the artist seems to like to play with a sort of distorted form of figuration which blurs and overlaps the characters and other component parts that go to make up his compositional sequences.  And that these scenarios, which look perhaps like offcuts from a random selection of news feature imagery, are replete with all kinds of highly ambiguous narrative possibilities.  So, for examples, he offers up a group of psychedelically clothed companions huddling together in a bright orange dinghy that floats on a pitch black sea; a pair of young men leaning either side of a massive tree trunk and preparing to be beaten by a team of batton-wielding thugs; and a red dog, lost in the forest and padding his way across a field of snow.  But are the huddling travellers migrants, refugees or day-trippers?  Are the thugs police, sadomasochists or naturalists?  And is the beast even a dog or is it some kind of other cursed chimeric cross-breed?  Nothing is ever certain or completely resolved and it seems to be up to the viewer to write, review and sub-edit the accompanying column inches of imaginary metaphysical text into the kind of acceptable common sense storylines with which we try to convince ourselves that the world as we see it around us has appropriate levels of meaning and rationality.  As to what it is that the artist is actually trying to convey, I’m not sure there is any actual meaning, message or morality in any of the individual works or in the exhibition as a whole, beyond the mere simple, repeated reiteration that the world, both literally and metaphorically, should never be read as black and white in terms of form or content. 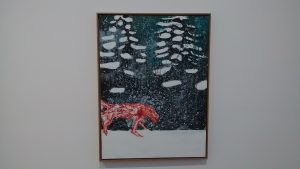 I think it’s worth adding here that all of these situations I’ve listed above are very beautifully rendered, the colours fizzing off the canvas like a wildly shaken cocktail of opal fruits and alka seltzer, and even when Richter tones the spectrum down in his mid-period work there is always such a fine balance of tones and forms that even if the overall constructions are often disconcertingly set on the slightly sinister side, the compositions remain attractive propositions to look at and contemplate.. 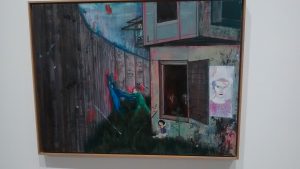 But let’s go back to the beginning and reconsider whether, having become acquainted with the man and his works, we think that Richter is an important artist?  And here I think the honest answer is to concede that while he may have been once, I’m not so sure he is any more.  Which is not meant to be any kind of back-handed denigratory sideswipe on his talent and abilities, but more a generalised commentary on the state of post-millennial painterly practice in toto.  In brief, I think that the work of Richter and his contemporaries may very well represent the final last gasp and flatulent burp emanating from the decaying corpse of a 500-year-old painterly tradition that was born, or maybe reborn, in Renaissance Italy and enjoyed a fruitful adolescence and sprightly maturity among the rest of the Western cultures before starting to lapse into senility during the decadent Post-Modern confusion that occurred during the closing years of the last century.  At that point in time, the crisis in painting could be encapsulated within the quandary facing artists of what was a suitable subject matter to paint, when everything had already been painted before.  But if that wasn’t bad enough, by the time this century’s neo-naughty decade was starting to teenify, the material world itself was starting to disappear as young people started their mass emigration into the embrace of the binary digits from which the new cyberspace universe was formed.  And it seems to me that no-one has the slightest idea of how this new non-dimensional world can in any way be successfully represented on the 2-D plane of a canvas, whether in paints, prints, photographic emulsion or any other materials.  Maybe no-one ever will – in which case painting is destined to join other earlier artistic formats like epic poetry and country dancing, and simply enters into decline, redundancy and irrelevancy. 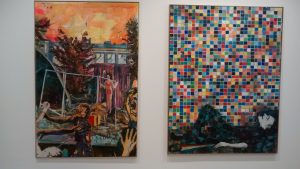 Looking at Richter’s most recent paintings I wonder if he’s maybe been having similar eschatological thoughts as he seems to have dropped the colour and figurational effects that once worked so well – or, at least, made his earlier works interesting and attractive to look at – and seems to be desperately thrashing around with different kinds of weak abstractional forms, presumably in the hope of finding a new viable style.  He certainly hasn’t found it yet and I think if there is a solution to be found, that will steer painting out of its current cul-de-sac and back into relevance, it’s probably going to be discovered by someone from a younger generation.  And should that happen then they really will deserve the accolade of importance. 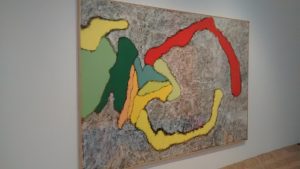