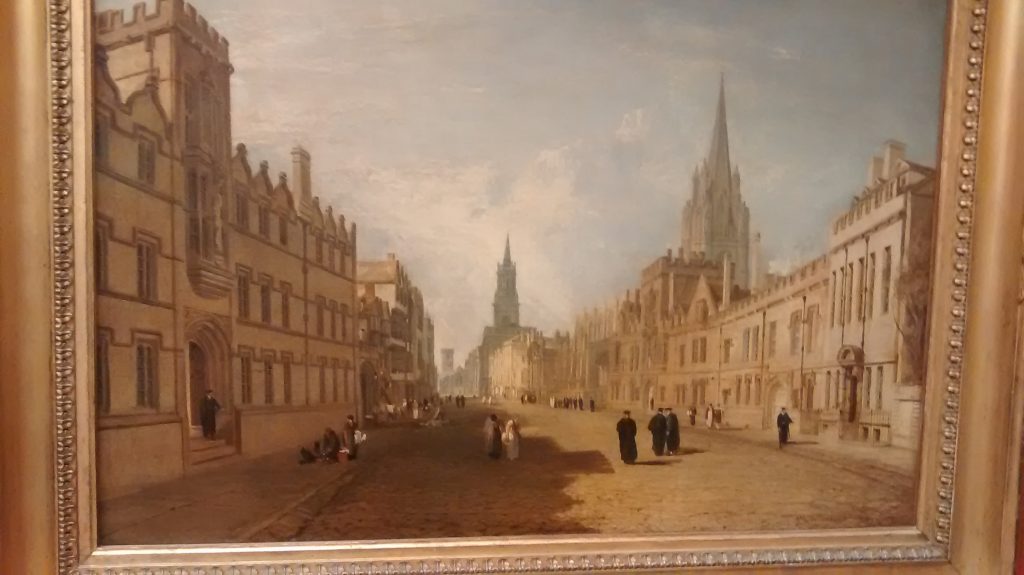 Decide that it’s time to take a break from seeking cultural treats by pounding my lonely path down the mean streets of the capital and so head out for a day trip into the wild bucolic wilderness of the outer Home Counties, and specifically that place where aspiring dreamers go to commune among the dreaming spires.  Although, about half way to my Oxford destination, it does strike me that I may have picked a bad time to visit the city since the advent of summer means that while the students and their irritating bikes will have probably pedalled off to Venice, Ibiza, Ashby-de-la-Zouch, or wherever it is that young inquiring minds go to take respite from their books and seek adventures in the sun, they will have been replaced by multitudes of coaches all full of overseas tourists expecting to see Shakespeare’s cottage and Sherlock Holmes’ den, before having two cream teas, a punt down the river and taking a final climactic selfie in front of Harry Potter’s Hogwart’s College.  It is, therefore, a very pleasant surprise to be able to report that for some reason – perhaps the cloudy skies, fear of terrorist attack or some kind of protest against the cussedness of our nation’s Brexit positioning – on arrival, I find the streets seem to be relatively free-flowing when it comes to the pedestrian traffic.  There are still some locals milling about doing their shopping and a few day-trippers looking for the beach but a very welcome absence of the clamorous hordes that I was expecting to see blocking the footpaths and storming the college walls. 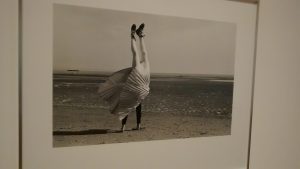 Certainly, there’s no queue to get into the first stop on today’s itinerary, the Modern Art Oxford gallery and, once inside, there appears to be only about half a dozen other fellow art explorers slowly meandering about through its rooms.  While this may be a bit disappointing for the gallery and its funding bodies, who presumably prefer to record large visitor numbers that encompass the widest possible demographic spread, for myself it’s the ideal situation.  Instead of having to push people out the way to get a look at the art and artefacts on display, as is so often the case, it’s possible to stroll around here entirely unimpeded, wandering back and forth amongst the exhibits, gawping at the prizes on display and reading all the labels, with plenty of time to try to figure out what on earth they all mean. 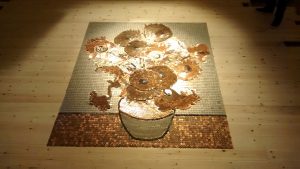 And I think it’s fair to say that Life, Belief and Beyond, an examination of the multiplicity of ideas and art practices which preoccupied the late Rose Finn-Kelcey during her well-regarded artistic career, is an exhibition that does demand of its audience a certain amount of thought and deliberation.  There’s undoubtedly quite a lot of interesting and amusing imagery on show here contained within the various sculptural installation items, films and photographs – both the ones revealing the straight Conceptual Art constructs and those documenting the artist’s performances and other idiosyncratic exploits – but I kind of think that Finn-Kelcey was less interested in seeking to stimulate the nerves of her audience’s retinal faculties than make a stir within the folds of its deeper cerebral capacitances.  So it is that when we see that most iconic of all her productions – the photograph of her on the beach performing a handstand and freeze-framed so that she’s forever upended with her pleated dress cascading down to cover her face – it’s not a case of the artist trying to emulate Cartier-Bresson by catching one of his pretty, witty, so-called ‘decisive moments’.  Far from it, the picture is a very carefully staged reconstruction intended to draw attention to, ‘…the gap between what is experienced on the inside by someone and what is conveyed – though their outer appearance – to the wider world.’  At least that’s what the label says, though I can’t quite decide whether those sentiments suggest a situation that is utterly profound or bum-numbingly banal and I’m just not sure whether this is a gap of which we need to be particularly minded or, indeed, has much value in being mined at all. 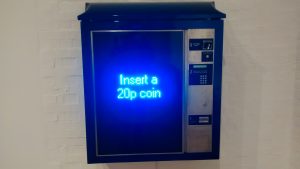 Elsewhere, the rest of the show is similarly composed of many quirky conceptual brain teasers referencing matters personal, political and paradoxical, and that vary, according to one’s disposition, from the facile and fanciful to the forceful and felicitous.  So, for instance, there’s a large-scale recreation of Sunflowers in copper coinage that highlight the absurd disparity between the poverty endured by Van Gogh and the auction price valuation currently achieved by this works; an LED display that reels out an endless list of thou-shalt-not prohibitions; results from a questionnaire handed out to a college of priests that asked them all to draw a picture of God; a box with a stuffed magpie; the film of the artist performing a matador routine (sans bull) and so on and on. 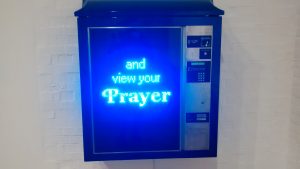 I suppose, in short, it’s an exhibition mainly for those who like going to galleries in order to think rather than just look, which includes me…up to a point.  And I feel that I’ve reached the point about two-thirds of the way in when the labels start to blur, my synapses start to feel the strain of too much mental work, and I get the distinct feeling that I’m starting to miss the punch lines of some of the jokes (I still think it would have been funnier and more effective if she’d not omitted the bull).  I think I probably need something to revive the spirits and, while tempted to try out the special Finn-Kelcey’s vending machine that promises a customised prayer in return for a 20p donation, decide to resist and instead seek a bit of colourful respite by meandering down to take a look at some of the treasures held within the walls of the nearby Ashmolean Museum.  In fact, the main reason I’m headed there is to see the special temporary exhibition of drawings by the great Renaissance stylist Raffaello Sanzio da Urbino, the man more commonly known by his simple abbreviated appellation of Raphael.  Understandably, there’s a lot of interest in the show and tickets are time-slotted which means when I get mine I find that I’ve got an hour to kill before I can get in to check out any of the maestro’s sketches and scribbles.  There’s clearly not enough time to look at all the classical marble statues, Egyptian mummies, shimmering ceramics, archaeological ephemera or, indeed, the great bulk of the historical collection of painting so I decide instead to concentrate on sweeping round some of the more modern sections and in particular the small but attractive selection of French Impressionist works and British Pre-Raphaelite paintings. 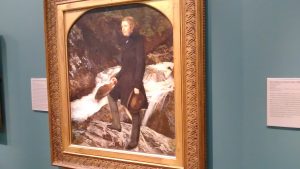 Over the years, I think I’ve probably seen most these works a few times before but, for some reason I’ve never quite managed to figure out, this seems only to enhance the experience of getting to see them all again.  And so it’s especially pleasant to re-examine the half a dozen country scenes captured by Pissarro, that most unfairly underrated of all the Impressionists, and also the excruciatingly poignant portrait of Ruskin, painted by Millais, when the latter was accidentally falling in love with the former’s wife.  Other favourites in the surrounding rooms include Turner’s view of Oxford high Street, Sickert’s Brighton beach performers and Stanley Spencer’s saucy selection of spiky succulents. 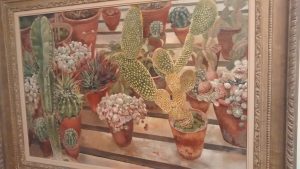 And having satisfactorily reacquainted myself with that eclectic list of highlights I find it’s time to clock in and join the end of the crawling crocodile queue that’s slowly snaking its reptilian route round the extraordinarily extensive collection of Raphael drawings that have been gathered together to make up this comprehensive display of the artist’s bravura draughtsmanship.  Who would have thought that quite so very many of the master’s fragile works on paper could possibly have survived in such very good condition for the past five hundred years?  Especially considering that few, if any, could be considered finished works of art but instead are preliminary sketches and try-out studies and the kind of thing that might normally have been shredded or binned after use.  The fact that so many have evidently been kept, treasured and traded over the centuries is testimony to their very special nature.  And I’m not going to try to be too smart and contrarian and suggest that Raphael’s talents are overrated or that he couldn’t really draw very well and he was a bit of a hack.  Although, I will say, he definitely seems a lot more comfortable delineating the bulging anatomical contours of his male models than trying to render the appropriate bumps and curves of members of the female gender – a somewhat surprising state of affairs considering his reputation as something of a serial philanderer. 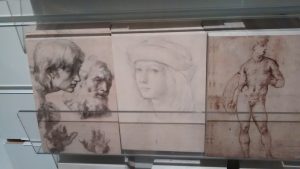 Having said that, the works are undoubtedly all really rather special, particularly when it comes to the great groups of interacting characters, whether it’s the bunch of baddies who go about massacring innocents in Bethlehem; a scrum of rugby players fighting over a ball in the nude version of the Six Nations Championship; or the chorus line kicking their synchronised steps in a sequence from Cabaret, again sans their accoutrements.  Well, that’s what I think all those writhing bodies might have been getting up to but have to admit that I couldn’t quite get close enough to read any of the accompanying labels properly in order to confirm the veracity of my first impressions.  It goes without saying that here’s another blockbuster show that ultimately disappoints since it’s just not possible to comfortably see all the works.  And for those who really want to find out who was doing what to whom and deliberate on how Raphael managed so very cleverly to capture both the expressive twists of the bodily forms and the subtle shadings that reveal their innermost thoughts, then it’s probably best to buy the catalogue and study that back at home. 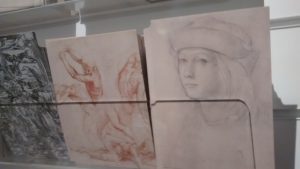