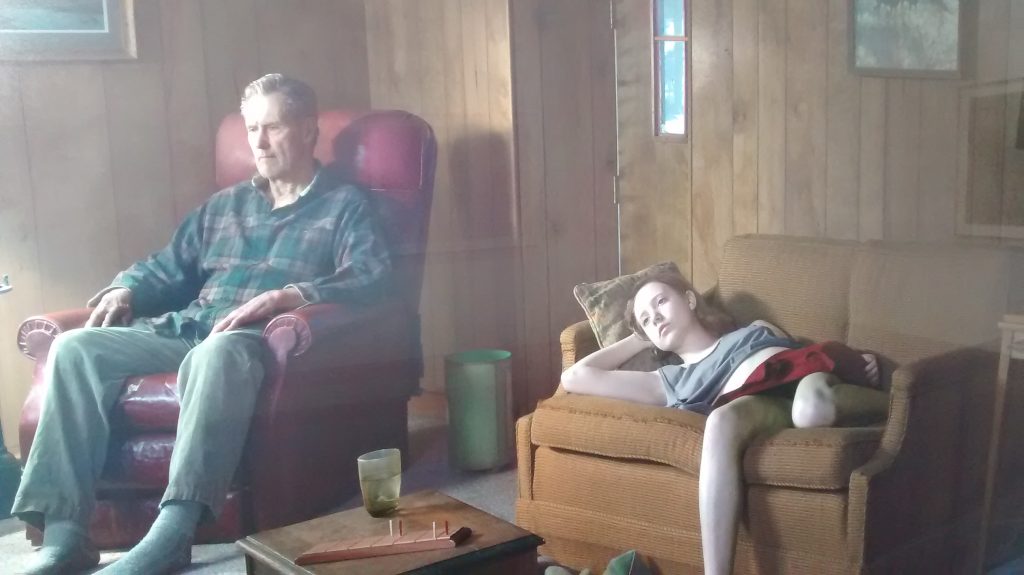 To Oxford Circus tube station and then walk past McDonald’s and down on towards Muji and beyond.  Many’s the time I’ve trudged along this particular route and been so deeply involved in deconstructing the intricacies of my own meandering random thought processing, or else been distracted by the turbulent torrents of oncoming touristic traffic that I’ve got as far as Marks & Spencer before scratching my head, turning round and wondering how on earth I’ve managed, yet again, to walk straight past the little run of steps that leads down off into Ramillies Street and on to the Photographers’ Gallery.  But today I’m a bit more careful and, keeping eyes right, successfully spot the hidden turnoff first time round.  I also manage, rather pleasingly, to get to the Gallery before its odd, arbitrary midday deadline cutoff point, after which they start charging to get in to see their shows.  So, a good start to the morning, engendering a mildly optimistic mood which proves to be all too short-lived as I head in to take a look at Gregory Crewdson’s substantial suite of photographs gathered together here under the evocative rubric – Cathedral of the Pines. 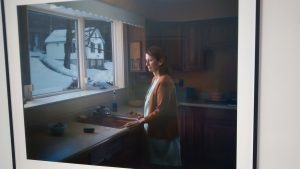 Crewdson’s collection of shots takes up all three of the main floors of the Gallery which, according to taste, allows the viewer to become fully, satisfyingly immersed in; or, perhaps, ever so slightly overwhelmed by; or, maybe even, dare one say it, utterly, unnecessarily supersaturated and bored by the photographer’s very distinctive presentational style.  I guess that I probably fall roughly in the middle camp and think that maybe two floors would have been adequately sufficient to allow the viewer to get a pretty thorough feel for the photographer’s aesthetic standpoint.  In which case, the final, third room, might usefully have been given over to allow another photographer to provide a bit of contrasting light relief, in both senses of the word.  For, the simple fact is that Crewsdon takes great delight in presenting snapshots of carefully staged scenes composed of characters and settings that unremittingly, unrelentingly, uninterruptedly, tend towards the disconcertingly gloomier, grayer, beiger end of the spectrum of fictive constructs. 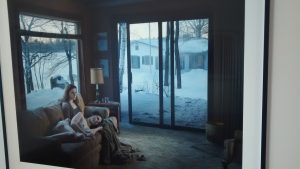 In short, Crewdson offers up a succession of stills suggestive of a slightly creepy, melancholic melodrama, much in the mould of Twin Peaks or some other unnervingly unresolvable, semi-surrealistic TV saga.  So, why is the woman stood by the kitchen sink looking so wistfully out into the mid-distance?  Why did the couple park their truck at the end of the trail in the middle of the forest?  Why does the man watching TV in his living room look so uncomfortable, and does it have anything to do with the sulky teenage girl sitting nearby?  What is the pregnant woman in the shower thinking about?  Why did the pair of naturists decide to dip their toes in the stream under the old brick bridge?  Each one of Crewdson’s very precisely staged tableaux seem to come with a specially pre-packaged range of begging questions that very deliberately encourage the viewer to try to rationalise what’s being witnessed by imagining a great sprawl of intricate backstories, elaborate plot points, complicated character biographies and assorted rusty red herrings.  But what all the manufactured stories seem to share – apart, this time, from the fact that they’re all located either within the confines of a set of equally claustrophobic log cabins or else outside among the desolate pine forest surroundings – is a suggestion that we voyeurs have been allowed to enter the situation somewhere very close to a potential tipping point.  And it’s hard not to feel that an ominous silence is about to broken by a series of anguished screams or the sound of a gun being fired, and that all of the dreary monotone colourscapes will soon be invigorated by the glistening red sheen forming over an expansive pool of blood or shattered by the pop of a flash bulb when the police forensics cameraman arrives to document these scenes of crimes about to be committed. 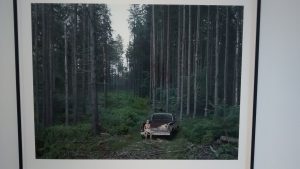 Frankly, it’s hard to dream up happy endings for any of Crewdson’s narrative puzzlers and since there’s never any real narrative development, let alone any resolutions – the last picture in the show being just exactly as enigmatic and unnerving as the first one encountered on entering this web of intrigues – one is almost inevitably destined to exit the show with an uncomfortable and lingering sense of unfulfillment.  And so, in an attempt to recover my earlier, more cheerier mood, I decide to cross town, via a couple of tube rides and a short bus journey, switching away from the anguished arboreal ambience of Crewdson’s coniferous confines to the more deciduous and leafier environs of Kensington and Chelsea, and thence into the warm embrace of the ornate opulence that so happily characterises the Leighton House Museum. 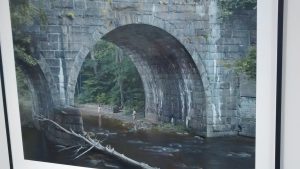 Currently the good Lord’s works have been bubble-wrapped away into storage to allow space to be freed up to display a large temporary exhibition of paintings by one of his well-respected contemporaries, Lawrence Alma-Tadema.  Both these eminent Victorian artists were blessed with a tremendous technical facility when it came to applying paint to canvas – one that it’s clear that they enjoyed showing off and it’s a delight to see here just how skillfully Alma-Tadema manages to suggest the crystalline sheen on a slab of white marble, the furry fuzz on a leopard skin rug; the delicate patterning and intricate folds of a loose fitting toga, and the simple natural beauty inherent in a swathe of sunflowers and poppies.  And then, of course, there’s all the alabaster flesh tones, curvaceous contours and pretty faces of a succession of attractive young models.  Although, for those of a delicate sensibility, it’s safe to say that there are many more scenes here of languorous lolling than the more gratuitous examples of lascivious lubricity that one tends to associate with the aesthetics of some of the other, more roguish painters of the era. 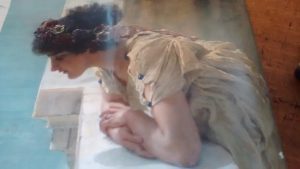 As for the subject matter which allowed Alma-Tadema to incorporate all the elements listed above into sequences of carefully constructed narrative displays, well, some of the scenarios are set in the dark depths of the Gothic Middle Ages and pharaonic Egypt, and there’s a handful of contemporary portraits but, as is well known, the artist famously favoured concentrating his efforts on recreating episodes from the classical past.  So it is that Leighton House is full of scenes from Ancient Greece and Rome, not so much the mythical exploits of their heroic gods and goddesses but a mix of the quotidian rituals of everyday soap opera life coupled with illustrations from some of the more dramatic fables and histories of the time.  So, we get to see everything from the simple scenes of shoppers walking round a flower market and a young suitor repeatedly proposing to his sweetheart, right up to full-scale spectacular mega-production absurdities like the one showing the crazed emperor Heliogabalus literally drowning his dinner party guests in cascade of rose petals. 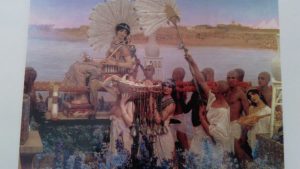 Apparently Alma-Tadema spent a good deal of time and effort researching the archaeologies of the past in order to try to render his scenes as historically truthful and accurate as possible.  Though just how far he succeeded in these attempts at chronological verisimilitude I’m not sure, since my knowledge of the clothes and customs of the period are, I suspect, like most people, less informed by a close study of the relevant academic treatises than coloured – or maybe that should be discoloured – by memories of seeing Charlton Heston and Tony Curtis swaggering about in sword and sandal epics, watching Derek Jacobi stutter his way through I Claudius on TV and Frankie Howerd doubling his entendres Up Pompeii.  And, as a rather neat adjunct to the exhibition here shows, these later, moving picture reimaginings of the ancient past (the cinematic ones at least) seem very often to have been based fairly directly on set-ups and stagings taken from specific Alma-Tadema paintings, rather than the result of art directors initiating their own original research. 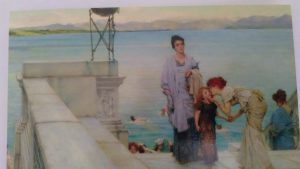 Of course, in the end it doesn’t really matter very much one way or the other how closely the actual flower markets in Roman cities resembled Alma-Tadema’s portrayals any more than it does whether Heliogabalus’ weapon of mass suffocation was the rose, as in the painting, or violets, as per the original story which, in any case, is very likely to be a fictitious early example of fake new propaganda spun out by his enemies and detractors.  Anyway, all such discrepancies, witting or unwitting, are surely exempt under current artistic licensing laws and nitpicking over the historical details of a painting’s subject matter just risks missing the enjoyment to be had by stepping back and looking at the bigger picture.  And even if the bigger pictures here may ultimately just be indulgent escapist fantasy nonsense pastiches, I’m happy to admit that they still put a smile on my face as I daydream of donning a toga to join Charlton and the lads for a pizza down at the local forum. 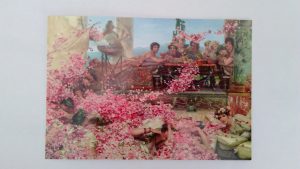