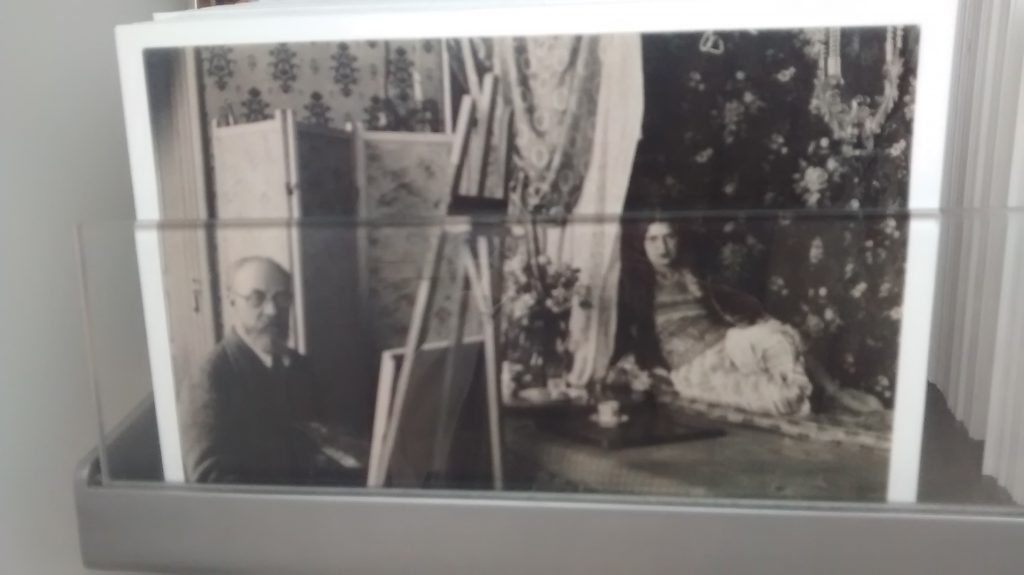 Down to Piccadilly station and off to the Royal Academy which, thankfully, is quite a bit quieter today than it has been over the past few months.  With the Summer Show now ended, the polite hubbub of people who make their special annual pilgrimage to see that particular seasonal favourite has consequently subsided and, as the chill autumnal winds start once again to wind and whistle their way around the famous Palladian courtyard of Burlington House, the main suite of galleries inside is currently being cleared and readied for hanging the year’s final blockbuster show – a survey of works by the highly-regarded American proto-Pop artist Jasper Johns.  At the risk of appearing to be a bit of a grinch and attempting to douse expectations with a shower of slightly chilly eau de vieil home de grumpe, I can’t help thinking that this exhibition is one that could probably have been very adequately situated within two or three small rooms rather than requiring the dozen or so rather large ones that it seems will shortly be allocated to contain it.  But, then again, maybe – hopefully, even – I’ll be proved wrong.  It’s just that I can still vaguely remember a very large show at the Hayward some years back which confirmed my suspicions that while Johns came up with an amazing selection of images and ideas at the very start of his career, this exciting and innovatory phase fizzled out really quite quickly and that for the subsequent several decades the poor man has just, rather sadly, comforted himself by repeatedly reworking, reprising and reiterating variation of his early greatest hits, in a manner somewhat reminiscent of the ageing rock star reduced to desperately peddling slightly different selections of the same old career-defining compilation album (or tapes, CDs, downloads, streamlets or however it is that popular music is now being disseminated amongst the populace these days). 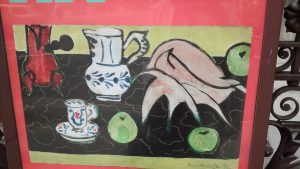 Anyway, until that show comes along at the end of September, I’m off up the back stairs and into the Sackler Wing where, once again, proof is provided that it’s not the scale, size and number of works in an exhibition that necessarily makes all the logistical efforts of staging it worthwhile but, instead, it’s the intelligence of the idea of the thinking of the concept behind the choice of subject matter selected, that can sometimes be distilled down into…suffice to say that Matisse in the Studio is one of those pleasantly compact and successfully succinct exhibitions that provides not only lots of nice things to look at but also quite a lot to think about as well. 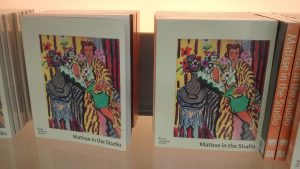 The basic idea behind the display here is that the curators have gathered together a selection of original props from the great artist’s studio and then placed them next to the paintings and drawings in which they once appeared.  It’s a rather neat and simple idea but one that works well on several levels, for it provides the opportunity not only to examine how Matisse used this mix of everyday objects and slightly more exotic collectibles – pots, tables, masks, maquettes, textile hangings – to help inspire and structure series of various different compositions – still-lifes, interiors, portraits, and so on – but also how he used different styles at different times in his continually evolving career to try to render suitable copies of the world he saw around him in general, and some of these specific items in particular. 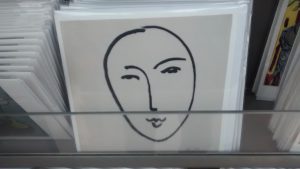 So, for example, putting on view the actual chocolate pot, with its wooden handle and silverplate body, that Matisse gazed upon when trying to produce an early, Chardin-esque type still life, shows just how much of a struggle he had when trying to tackle this sort of traditional type of figurative study.  Unlike his great friend and rival Picasso, who could emulate all of the great earlier masters and would have easily been able to bash out a couple of convincing repro-18th century still-lifes before breakfast, Matisse had little natural facility for either painting or drawing.  And, in fact, when he does manage to get all the right lines down on the paper in all the right order, whether it’s having a go at making ink sketches of the hinges joining a pewter pot lid to its body, or elsewhere trying to delineate the correct anatomical positionings of the limbs of one of his models as she reclining awkwardly on a divan, it always tends to come as quite a bit of a pleasant surprise.  But then the interesting thing about Matisse is that he never ever gives up and just keeps on trying different experimental approaches and strategies as he battles on to try to find an acceptable format whereby elements from the three-dimensional world around him can be forced into the unforgiving structures of the two-dimensional canvas in front of him.  And, of course, the reason that Matisse rightly achieved his position of eminence within the pantheon of early 20th century modernist artists, is that during the course of his never-ending, trial-and-error games playing there were so many happy accidents where, almost in spite of his clumsy best efforts, the compositions in their entirety somehow all managed to click together and add up to a harmonious total well in excess of the expectations raised by his assembling a bunch of poorly constructed, disparate parts. 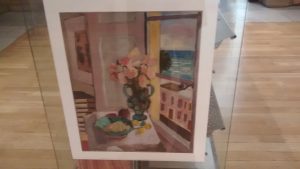 Included amongst these serendipitous successes are two simple interior scenes placed at the start of the show that both feature the same, very unexceptional, blue glass vase filled with flowers as their centerpiece.  There’s something about the way Matisse leads the eye away from the focus on this central floral display and then around the room and out through the window onto the sea and then back again as the viewer is nudged into trying to accept the logic of the different intersecting perspective elements, not just those of the vase and the table on which it sits, but also the walls and floor, sea and sky.  Again, the actual blue glass vase is put on display here for all to see.  And this time it’s clear that Matisse has felt no obligation to bother trying accurately to record its precise outline or the way that light might properly reflect from its surfaces, relying instead upon the viewer’s ability to read his abstracted shorthand version and accept that in its place.  And, as Matisse certainly knew, ultimately it’s his ability to create an attractive ensemble arrangement of colours and shapes that give these picture their charm and value, rather than the degree to which he was able accurately to replicate a sense of realistic photographic reproduction. 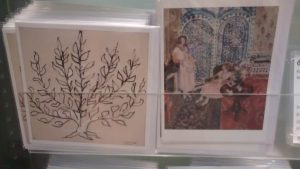 It’s arguable that it was a reaction against the jolt given to artistic practice by the invention of photography around 1840 that encouraged artists to start playing around with perspective and the representation of forms, and led to the emergence of Impressionism, Cubism and half the other artistic isms that arose around the end of the 19th and start of the 20th centuries.  Amongst these various artistic movements it was, of course, Fauvism with which Matisse was most associated although what the Fauves actually stood for – beyond behaving in a beastly manner – is by no means clear and I’m pretty sure they never bothered trying to draft out any kind of formal manifesto.  Nevertheless, I think it’s fair to say that they produced a sort of early form of Expressionism which, unlike the much harsher and more seriously spiky Germanic version, aimed to put a brighter, less pessimistic spin on the way the world revolved itself.  So, while the Teutonic variation used their distortions of shape and colour to investigate the manic fears and frantic fevers of the Modern world, Matisse’s Mediterranean temperament pushed him towards an antidote, exploring calmer, more contented arenas that led him to surrender into the warm embrace of a decadent bourgeois comfortableness.  And if doing this meant forfeiting accuracy and sacrificing precision rendering to the interests of creating an overall satisfying design through incorporating artificial colourscapes and patterning, then Matisse was all in favour of adopting that tactic. 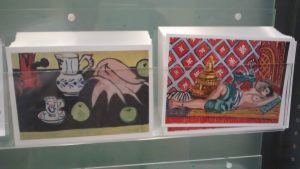 It’s an attitude that culminates in this show with a section devoted to Matisse’s examination of the seraglio, that fabled construct of the Western imagination capable of providing the perfect template for an imagined world of sensuality and exotic, hedonistic excess otherwise denied the average citizen in his daily life, whether bourgeois or below stairs.  But tastes change and looking at these paintings now, I wonder whether a youthful audience today might not very likely find these works either quaintly comical or even really quite offensive.  And it’s easy enough to construct a critique to damn the artist’s misogynistic gaze, his oppressive colonialist attitude and utterly inappropriate appropriation and distortion of parts of an ancient Middle-Eastern cultural tradition into which he has no right to dip his brushes. 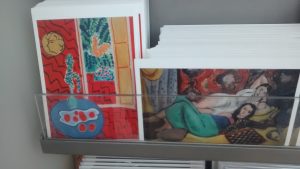 Well, having given that trigger warning, I confess that I find it hard to avert my voyeuristic eyes from these half dozen pictures of concubines in their dazzling daks, all lying recumbent on their snugly sofas and incarcerated within apartment walls bedecked with patterned fabrics (and again some of the originals of these are also on display here).  I suppose part of the attraction is daydreaming myself into the role of the Valentino Sheik or Red Shadow, but above that is the simple pleasure of being able to enjoy a luxuriating wander within Matisse’s world of saturated colouration, striking patternation, anatomical inconsistencies and pleasurably muddled perspectives. 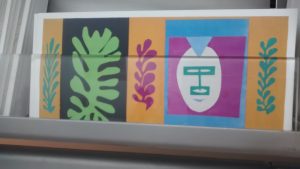