Well, once again, it’s that time of the year when London’s artworld comes over all of a twitter.  And I don’t mean that in the exciting new epigrammatic, anti-loquacious, Trumpian, digital way but – as you’d expect from this blog – in the old-fashioned, pulse-racingly, heart-poundingly, eye-flutteringly, cheeks-flushedly, analogue formulation.  Yes, this is the week when all the capital’s galleries, gallerists and gallery-goers wait with bated breath for the arrival of the buyers, blaggers and big shots that comprise the international caravanserai of artworld wanderers.  Having already stopped off to see the Fair in Basel, the Biennale in Venice and Documenta in Kassel it’s now London’s turn to welcome these dedicated travellers to enjoy the temporary tempting cultural diversions that comprise the fabulous Frieze festival of arty-party entertainments. 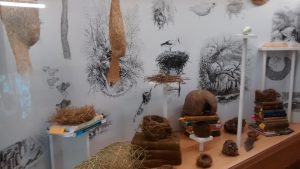 And at the centre of this kulturfest extravaganza are the two massive tented enclosures in Regent’s Park:  one filled up with displays from the old established blue-chip dealers in the so-called Masters section, and the other, somewhat more cluttered arena, full of all the most important, radical cutting edge contemporary galleries offering up tantalising glimpses of the futuristic visual treats that will define fads and fashions for the next few tomorrows.  At which point I’m tempted to pick out a few highlights from this year’s fair in order to summarise the main themes and trends and so determine what’s hot and what’s not, and how it all fits in with the other perceived theoretical discourses that are currently percolating their paths through the studios and salons of the bohemian underworld and up and around the avant garde hinterland that lies beyond. 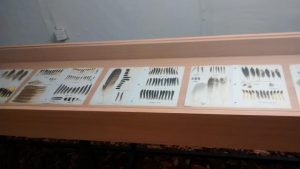 And I think I could probably have a pretty good shot at bashing out a few convincing paragraphs to explain the current capital situation and how it fits within the global network and relates out to the wider cosmic macrocosm and so forth.  But, at the risk of losing all credibility as a self-defined cultural commentator with an ear to the ground and a finger on the pulse of the artworld zeitgeist, I have to admit that this year, having declined to fly to Basel, Venice, and Kassel, I also decided against taking the tube to Regents Park.  So, was this action, or rather lack of action, prompted by some kind of high-minded, Corbynistic boycott, protesting at the rampant capitalistic commercialisation and commodification of the cultural sector?  Er, no, not really.  For some utterly unaccountable reason, once again the Frieze organisers forgot to send out my access-all-areas VIP entry pass and I just couldn’t quite bring myself to pay the normal full price double entry ticket.  Well, £54 is not exactly small potatoes and while art may be priceless, this blogger’s pockets are not entirely bottomless.  And so, in the spirit of the shared austerity that is currently uniting so much of the country, I decided to forgo the tempting allure of the big tents and instead follow the southerly route of the number 12 bus from the recently re-designed junction at the Elephant and Castle. 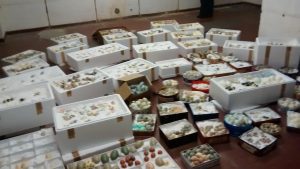 And first stop on the ride is the dilapidated shell of the former Newington Library on Walworth Road.  This unexceptional red brick building, now denuded of its fittings and furnishings and devoid of the bibliographical contents that once gave it life, is not, one might think, the most promising location for finding any kind of expressions of artistic activity beyond the usual anarchic tags and slogans of the youthful gangs of exuberant graffiti vandals.  But, in fact, the site has been temporarily commandeered by the Artangel squad, an organisation whose peripatetic modus operandi is to locate just such unpromising sites and then offer them up to specific chosen artists along with all the relevant logistical assistance required to help in the creation and display of a variety of spectacular site-specific installations.  In this case, however, the spectacle on show is not so much an individual piece of artwork exceptionalism but more a sort of craftily curated mini-exhibition.  The object of the show being a celebration of the wonders of ornithological investigation in general and that of father and son pairing, Andy and Peter Holden, in particular.  And so it is that the shabby distressed offices of this unhappy decrepit building are now filled with displays of bird’s eggs, bird’s nests, and vitrines containing collections of feathers and other assorted ephemera, while a video lecture centred on the topic of nest building plays on endlessly in the background.  Doubtless, all this must be very heaven for birdophiles but I suppose I’m a bit of an agnostic when it comes to avian affairs – happy enough to stuff seeds into a bird feeder during winter or sage and onion into turkey at Christmas, but unlikely to bother switching TV channels to watch a documentary on the travails of a ptarmigan or the autobiography of an albatross.  And while I can accept there’s a certain element of intrigue, marvel and semi-Surrealistic whimsy in setting up such a carefully coordinated and pretty display in such an unlikely depressed setting, I’m not sure that, even with the inclusion of some of the junior Holden’s bird cartoons, the transformation from straightforward museological presentation into actual interesting artwork has been very satisfactorily accomplished. 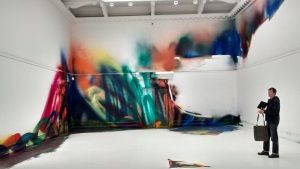 And so it’s back on the bus and on to the South London Gallery where Katharina Grosse has decided to turn the whole of the vast main gallery into one large canvas for a one-off display of action-painting abstractionism.  Having specially freshly whitened all the walls and floor of the Gallery, Grosse has then danced her way around the pristine box splashing, dripping and stencilling her whirls and swirls of colours all to rather charming effect.  I’m not sure if the artists intends her viewers to be so moved by her display as to evoke any other, more cerebral ruminations, above the thought that her presentation all looks quite pretty; or maybe whether she’s hoping the audience might reference some more profound conceptualistic considerations.  Although the fact that she’s decided to use the Gallery’s other two smaller spaces to display long video documentaries about women artists and artistic practices suggests that that may well be the case.  Either way, I just don’t have the youthful stamina (or aging inclination) any more to sit through nearly two hour’s worth of TV to find out, and so decide to settle instead for having quite enjoyed the simple transient retinal stimulation and optical frisson engendered by being temporarily entombed within a white kaleidoscopic box full of multi-chromatic titillation. 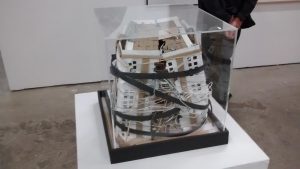 Then it’s back onto the bus and another few stops to get to PIAF, the Peckham International Art Fair – a name which carries the slightly comical hyperbolic resonance similar to that which was provoked by the adornment decorating the sides of the bright yellow Reliant three-wheeler owned by the most famous residents of this particular district of London.  But whereas the company car that transported the chief executives of Trotters International Trading famously boasted of its global connections with New York, Paris and Peckham, I’m not exactly sure what it is that unites the twenty or so small galleries and curatorial projects that have been gathered together to display their wares under this new PIAF umbrella.  No matter, while the various stalls and stands here cannot quite match the extravagant quantity or proud, prestigious reputation of those occupying the Frieze fair, there is probably a fairly similar range of visual attractions varying from the casual to the crafted and the daft to the delightful.  Although the tendency here to pack everything into a sort of chaotic jumble sale presentation perhaps echoes the barrow boy mentality of the Del Boy and Rodney rather than the cool antiseptic clinicality suggested by the Frieze homophone.  To name check a few things that caught my eye – I quite liked Jenny Love’s Terminal House, an architectural scale model of a building held together with tape and string; Irvin Pascal’s Queen of Lydia, that reworks an old Jeff Koons’ joke with couple of basketballs; and the homage to Tretchikoff whose Chinese Girl is photographically revivified courtesy of Nigel Grimmer from the Artists Studio Company stand. Although, to be fair to all the other artists, it does tend to be the gimmicky stuff that stands out and the more considered and subtle works that get overlooked when displays get crammed together as they are here.  I think this was the inaugural year for PIAF so hopefully they may be able to find a larger venue next time around. 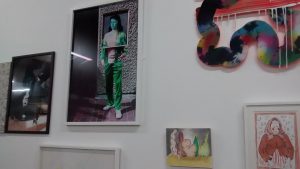 Finally, switching off the number 12, I get back into town and head down to the Mall and the ICA where I collect my renewed annual membership card.  And it seems that the executive board here has decided to go in for a redesign of the building’s interior décor.  Everything has been stripped back to the brickwork with dividing walls gone and internal wiring revealed and, frankly, it all looks a bit like the redundant Newington Library visited a few paragraphs earlier.  In my naivety, I initially assume that what I’m looking at must be the essential preparatory work preceding the installation of the new gallery spaces and all their associated accoutrements but, no, the receptionist advises me that the work is complete and that the new look ICA will remain this sort of distressed radical austerity chic.  I’m not sure if this is amazingly trendily forward looking or a desperately sad return to the past but as for the current exhibition – comprising banks of screens all running simultaneous screenings of Seth Price videos – I scan through the accompanying leaflet and get to the bit about, ‘…image-searching and archive-plundering…(shifting) the notion of artistic innovation from the production of objects…to an epistemology of search…(and) the retrieval of content in intelligible patterns…’ and decide it’s probably time to go, and come back another day. 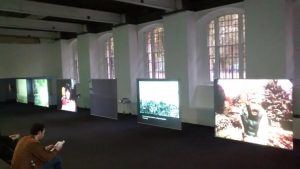