According to my careful chronometric calculations, the Unvarnished blog site has now been up and running for exactly two years and one week, during which time I’ve managed to tap out just over a quarter of a million precision-guided words and scan in just under a thousand, slightly blurred photographic images.  On this anniversary occasion, the temptation then exists to step back and try to make some more general speculative ruminations on the state of play within today’s fast-changing contemporary artworld, along with special reference to the role of the humble hack who sits in solitary confinement falteringly tapping out a staccato rhythm on the laptop keys while looking at an illuminated screen to see if the tumble of words that have stutteringly spilled out amount to any kind of insightful hill of beans.  Then again, rather than engaging in any such macrocosmic meandering or indulgent self-examination of the omphalos, maybe it’s better just to slip on the brogues and once again try to log down the jumble of thoughts arising from yet another discursive ramble round the artistic purlieus of central London. 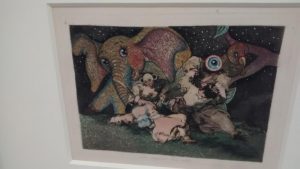 And so it is, that I find myself emerging from the dark subterranean enclaves of Oxford Circus tube station into the sharp bright urban light above, only this time I’m met by the balmy brush of an unseasonably warm breeze which wafts across my face and gently undulates its way through the remaining silvery strands of my carefully coiffured comb-over.  The unexpected clemency of the weather makes for a pleasant start to the day and I interpret this well-timed and well-directed zephyr to be an augury from above – confirmation that whichever one of the gods or goddesses that has been assigned responsibility for watching over the well-being of lonesome digital scribblers, they are encouraging me to continue blogging about the ongoing saga of my never-ending quest to find artistic enlightenment. 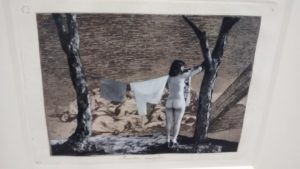 With that in mind, it may have been a bit of a mistake to start today’s journey at Blain Southern, where Jake and Dinos Chapman are, once again, trying to reprise their role as the naughtiest schoolboys in the artworld playground by scribbling all over their course books or, rather, defacing yet more suites of Goya’s etchings.  This time the bad-boy brothers have decided to pick on scenes from the Disasters of War series and give them a mocking makeover by adding in a mix of sparkly comic book unicorns, grotesque distorted Mickey Mouse mannequins and random photo cutouts that range from penguins to teapots and anything else that looks comically incongruous.  None of these additions seem to be in any sense commentaries on the original artworks that are being obscured but rather just a generalised act of insouciant raspberry-blowing, presumably aimed at upsetting the sensibilities of the mythical man on the street, or the silent majority, or perhaps some other kind of establishment status quo.  The problem, of course, is that, as with all such appalling antics, familiarity breeds, if not contempt, then ennui and, frankly, it’s hard to believe that anyone is any longer shocked, stirred or even mildly disturbed by the Chapman’s brand of childish subversion that has been diluted to near nullity by each repetitious overuse during their thirty year career.*  Having said all that, alongside the reworked etchings are half a dozen bronze sculptures of suicide belts – the kind that terrorists use to kill and maim innocent people.  It’s an ill-considered artistic display in particularly poor taste. 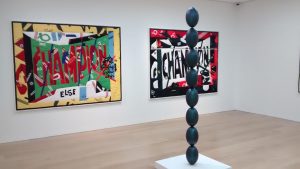 Thankfully, there’s a rather more joyous sense of colour and noise to be found at the next stop on the itinerary where Hank Willis Thomas fills Ben Brown Fine Arts with quilts and sculptures that attempt to pastiche some of the imagery of football game paraphernalia along with designs culled from the art history reference books.  So, supporters’ banners are reframed to quote elements from Matisse’s Jazz series prints; Brancusi columns are reassembled from craftily balanced rugby balls; and a solitary footballer’s leg that pokes out of the gallery wall echoes one of Robert Gober’s little Surrealistic jokelets.  It’s all a bit of stylish, silly fun and perhaps not really to be taken all that seriously, unlike the series of recent Brice Marden paintings down the road at Gagosian’s Grosvenor Hill gallery.  These dozen large canvases are the kind of simple minimal abstract works that definitely require the viewer to wrinkle the brow, squint the eyes and stare at very attentively.  The point being to try to ascertain whether the works are exquisitely subtle and beautiful constructions of chromatic wonderment, of the kind that can only truly be appreciated by those possessing the requisite sophisticated refinement and good taste limited to occupants of the uppermost echelon of connoisseurship – or if they’re just big boring blocks of paint.  I confess that while I thought the overall display was beautifully staged, with the gallery exuding exactly the correct, measured ambience of respectful hush, when I looked up at the pictures I remained disappointingly unmoved and my heart definitely didn’t sing.  Proof perhaps that there are still a few more rungs on the ladder to edge up before I can claim that my senses are truly tuned to the pitch point perfection of the absolute aesthete. 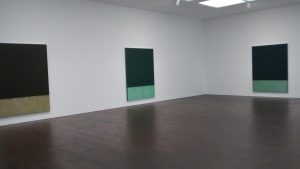 Meanwhile, over at Gagosian’s other, smaller space on Davies Street there’s a neat little display of paintings by Tom Wesselmann, one of the original gang of four great American Pop artists.  The rather obvious appeal of his much-favoured pin-up imagery tends to distract the casual viewer from noticing just what a skillful draughtsman and painterly technician the artist was.  So it’s especially nice to get the opportunity here to take a close up look at his versions of white lilies and grisaille rose petals and confirm that he really was rather masterful with his brushwork and compositional structuring.

Heading on up to Bond Street I walk by Gimpel Fils, which isn’t really on the original art route that I’d planned but I can’t resist taking a quick look at their display of Modern British Sculpture.  It’s a general selection of small works dating from the 1950s and ‘60s but whose spiritual home is more like the 1930s and ‘40s.  So, there are a couple of cool abstract bronzes from Barbara Hepworth; one of those stringy sci-fi constructions by Naum Gabo; some awkward attempts at figuration from Reg Butler, who seems to delight in making his models pose in the most undignified ways; and various other mundane metallic lumps and slightly more interesting preparatory sketches and doodles from Henry Moore and friends.  It’s a reasonable introduction to some of the threads of British Modernism that were being woven in the years immediately preceding, and then following on from, the War but this period was not exactly a golden age in the nation’s history and I should think anyone under the age of about sixty would have no qualms against consigning most of these works straight to the scrapyard. 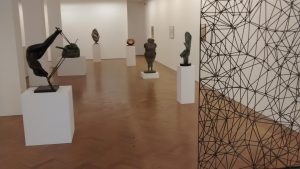 Doubling back down New Bond Street I come across another unplanned distraction in the form of an exhibition at Christie’s entitled About the Line.  The show has been specially curated by Cristian Albu, one of the auction house’s senior staff and, since it comes with a big, bulging catalogue, presumably quite a lot of time and effort must have been expended on getting it all together.  But while the show gets off to a good start, with some top range, classic Mondrians providing the backdrop for a Calder mobile and one of Picasso’s bent metal portraits, much of the rest of the hang is a right old mess.  A room full of Bridget Rileys is extraordinarily crammed together, as is an otherwise quite interesting run of paintings and drawings by Le Corbusier (wearing his artist’s, rather than architect’s, hat), and poor Jasper Johns has one of his cross-hatch abstracts squeezed on the end of a run of minor figurative walks as an almost insulting afterthought.  It’s all quite bizarre and I’d certainly like to get a second opinion from anyone else out there who’s seen the show to know if it’s just me who thinks the display is a real stinker and an object lesson in how not to present an exhibition. 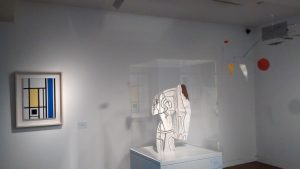 After that horror show, it’s nice to be able to report that today’s ramble ends on a high note after I head round the back of the Royal Academy to get to the Pace Gallery which has gathered together a very healthy bunch of late Dubuffets – the crazy collagistic compilations that suggest the happy energetic bustle and buzz of a dozen dingy Parisian street corners.  The pictures are full of silly, faux naif cartoon characters set against a vibrant background of scribbles and scratches, dashes and doodles, all of which coagulate in a great sort of clamouring, clattering commotion.  It’s a kind of urban Basquiat graffiti art but avant la lettre, as they might say in France.  Either way, it provides a happy conclusion to another year’s worth of bountiful bloggery while, hopefully, boding well for the next twelve months of revelation, insight and general bean hill building. 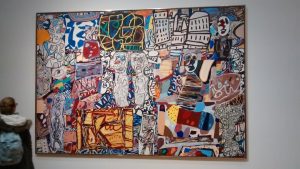 *In fact, the Chapmen aren’t the first to have a go at poor old Senor Goya.  According to Timothy Hilton’s sprawling biography of Ruskin, the grandfather of British art criticism was even more iconoclastic than today’s flashy conceptualists and, having bought a portfolio of prints by the mighty chronicler of Spanish custom, took great delight in deliberately setting them all on fire and watching them burn to ashes.