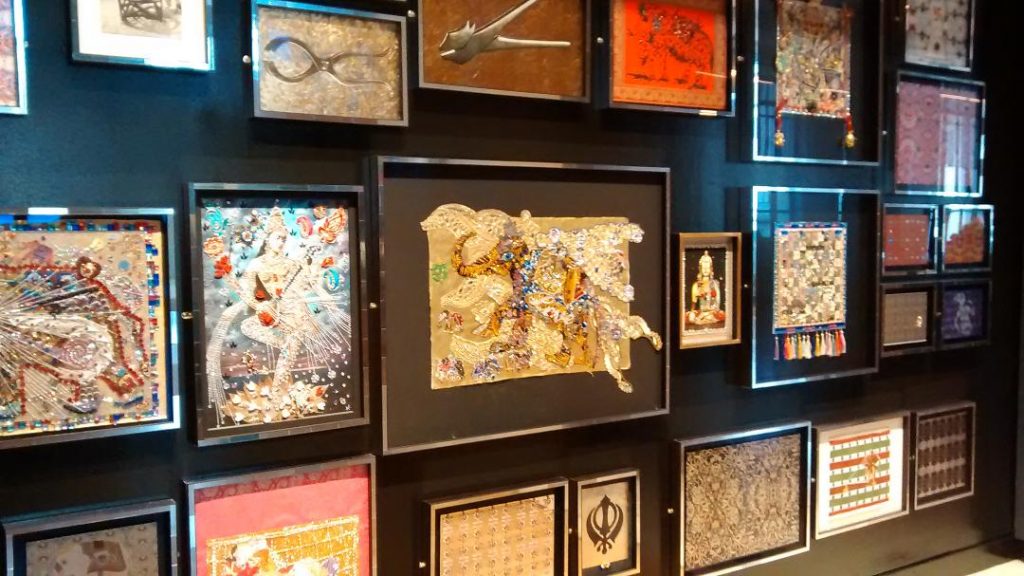 Having consulted the geographical charts and updated the astrolabe, I realign my compass to a north-by-north-easterly setting and head off in the direction of the Hackney hamlets which, I am advised by my cursory wikipedia researches, are among the coolest locations in the capital – and I don’t think that means these areas are cursed by an unnaturally inclement set of chilly meteorological conditions.  Anyway, after a bit of confusion at the Kings Cross interchange I finally manage to get a train on the correct bit of the orange Overground line and emerge a little while later into the light at Dalston Junction.  As I may have already indicated, this is not a part of the city that I know very well and, frankly, the terra is definitely all a bit incognita to me.  Nevertheless, first impressions suggest that the community is the usual cross-generational, cosmopolitan mix of people that fill most of the outer parts of London and that those not bustling in and around a high street filled with the comfortingly familiar logos of all the usual retail chains are shuffling their way through an impressively extensive open air market.  Trudging my own way through this cornucopia of fruits and vegetables, meats and fishes – some examples of which, it has to be said, are quite curiously exotic, not to say bizarrely unenticing and utterly unappetising – I see signs of the yuppified gentrification that has become such a happy, traditional indicator of the health of our capital’s psycho-sociological evolution. 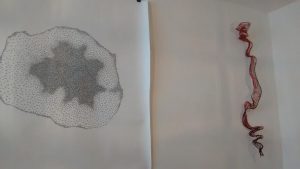 And so it is that once upon a not so very long ago, whereas locals and other peripatetics in search of enlightenment and sustenance would have visited the local greasy spoon in order to read the Sun, engorge their arteries on a heart-warming, heart-clogging fry-up and slurp their way through some over-sweetened, over-stewed brew, before rounding things off by trying to suck the nutrients from a freshly rolled-up roll-up and …well, let’s just day that nowadays there’s a rather more pleasant and healthier alternative.  Coffee Is My Cup Of Tea is a sort of breakfast, brunch and sandwich bar where the menu includes the kinds of ingredients – harissa hummus, cumin carrots, curly kale and, of course, nigella seeds – to make a foodie start to salivate and a hipster tweak the ends of his tash.  Laptops have superseded red tops as the latest supplier of unreliable news to the clientele here and, should any of these whole-grained, wholesome individuals get bored when reading their tweets, updating their media profiles or swiping their tinders, when they do look up from their screens, instead of finding walls decorated by a calendar showing a buxom bathing beauty and a series of souvenir posters recalling holidays spent under the sunny Spanish skies, they’ll be greeted by some proper bits of actual art.  This, of course, being the reason why I’ve made my own personal pilgrimage off the usual overbeaten track and away from the more centrally located environs of the inner London comfort zones 1 and 2, through which I more frequently perambulate.  And the reason for going to such lengths to get a culture hit?  Well, this time I know the artist and I’ve always been impressed by the dedicated application she’s devoted to her craft over the years and appreciated the subtlety of the works that have resulted from such consistent effort and hard work. 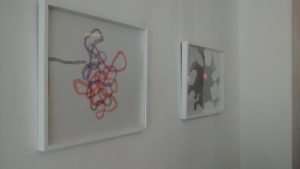 I suppose a reasonable short-form description of the pencil drawings and twisted wire sculptures that Debbie Duffin has worked and reworked over a lifetime’s career would reference their abstractified echoes of various natural forms – acquatic, biomorphic or maybe even mineralogic, in the sense that the larger works frequently arise from the accumulation of carefully repeated fragments of smaller units.  The results are like the frozen apparitions of force fields that buzz around the ether – eddies and ripples that combine to make up the cosmic crosscurrents in the ethereal web of interfaces that…that…well, some artworks, and especially those that engender a sort of sparky subconscious resonance in the neural network of this particular blogger, are difficult to describe in words without resulting in a kind of poetic metaphorical logorrhoea that quickly cascades into a semi-delirious waffle of meaninglessness.  And, that being the case, I think I’d better settle for just saying that the small show of works here look attractive and intriguing and seem to make aesthetical sense in the kind of way that the best art sometimes does whilst also defying the simple rationalisation of reason that can be grounded in the logic of language. 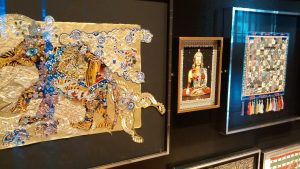 Which, I feel, makes it probably time to retrace my steps back down the Junction and embark on the long, diagonal cross-town trek to get to the Science Museum where, coincidentally, another acquaintance is displaying a compact selection of her latest creations.  Chila Kumari Burman has been given a wall by the entrance to an exhibition designed to celebrate Asia’s contribution to scientific development over the past five millennia and has used this opportunity to show more of her brilliantly bejeweled collages of iconographic Indian imagery.  So, there are sparkly, sequined sequences of gods and buddhas, board games and elephants and other more generalised references to the scientific forms that appear in the main show, all of which combine to evoke the colour, noise and creative confusion that seems to be currently reinvigorating the fortunes of the sub-continental hub.  I won’t bother repeating the bit about how it can sometimes be hard to adequately express opinions about the art that intuitively appeals to one’s instincts and, instead, will just close off the paragraph with a recommendation to go and take a look at the show while I now depart from South Kensington and tube my way over to Pimlico and so on to Tate Britain. 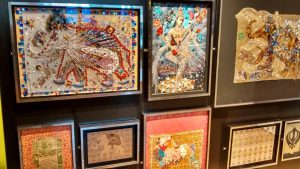 And if the first two small shows received the metaphorical thumbs up, unfortunately the digits must be rotated through each second of the full 180 degrees to pass judgement on Impressionists in London, a show that fills up eight rooms of the Tate for the next five whole months.  Rather than an attempt at gathering together the visual evidence required to illustrate the historical researches or exciting new revelations and theories of some art historian or other worthy academic, this show look to me like one of those ideas that has arisen following on from a brainstorming committee meeting of the gallery’s sales and marketing team.  Impressionism is, after all, by far the favourite form of Modern Art for the general public, which makes getting the ‘I’ word in the title of an exhibition a top priority when it comes to the desperate quest to sell tickets to would-be blockbuster shows.  But proper curating requires more than just coming up with a catchy title and, presumably, after the initial pitch was made, some young intern was then given the task of making a list of paintings that could be considered Impressionist in style and concerned London in composition.  The good news – there are some great paintings by Monet and Pissarro that fit the bill, having been painted when the artists crossed the Channel to escape the chaos and carnage of the Franco-Prussian War.  And, since quite a few are held in public collections in this country, they’ll be cheap and easy to borrow.  The bad news – there aren’t nearly enough to make a full-sized exhibition, even after squeezing the budget to get a few loans from collections in Washington and Paris. 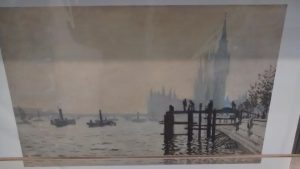 So, what to do?  Well, be creative and pad things out with examples of art that are decidedly not Impressionistic in nature, seems to be the answer.  So, start with an introductory room of photographs and Symbolist works by Corot and Dore that show how the War impacted on Parisian culture; then give other rooms and wall space to the sharp figurative narratives of Tissot, the gloomy social realistic daubings of Legros and the elegant sculptures of Carpeaux; then add in a wall of Whistler’s Nocturnes; and finally close with a coda of works showing some of Derain’s Fauvist views of the Thames. 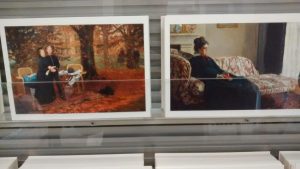 Some of these works are pretty good (some very much less so) but interspersing them amongst the main Impressionist stuff (most of which is good, if not truly great) is not conducive to creating either an attractive, visual experience or putting forward any kind of coherent historical, sociological or art theoretical narrative.  Frankly, no proper theory, thesis or argument is being made here and there’s no real reason for grouping these disparate works together and putting on the show at all, except in the somewhat cynical belief that it may attract visitors expecting to see a lot of pretty Impressionistic visions of the capital.  Those who do come in that hope may well be disappointed at the relative lack of such works and by the fact that many of the paintings here will anyway be familiar old friends that usually hang on the walls of the National Gallery and other provincial museums where they can normally be seen for free.  Sad to say that even the room full of eight of Monet’s late views of Westminster (painted from the vantage point of the Savoy) – clearly what was at some point meant to be the culminating, tour de force highlight of the show – manages to fall a bit flat.  On other occasions when curators have gone to the trouble of regrouping examples of these serious series works together, whether it’s the haystacks, avenues of poplars or Rouen Cathedral, the results have often been spectacular.  But this particular suite of silhouettes of a shadowy Parliament building immersed in a port wine dark sea and shrouded against an equally crepuscular sky, just looks a bit dull.  It’s an impression not improved by repetition, though it does unfortunately seem to make it an all too appropriate addition to this rather ill-considered and disappointing exhibition. 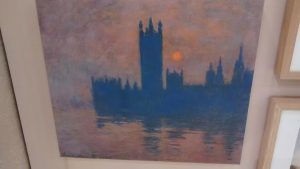 One response to “A Hipster Tweak”