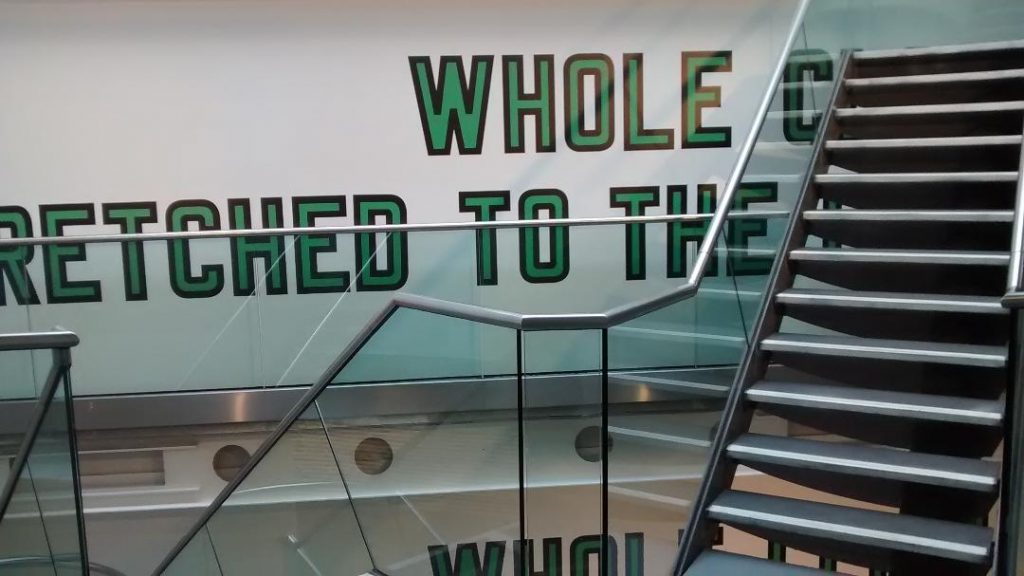 Having orientated myself orientally, I head out to Aldgate East tube station en route to get to the Whitechapel Gallery, a space that is marvelously – one might almost say consistently – inconsistent in the quality of the exhibition that it chooses to stage in the two cavernous exhibition spaces that make up its main display areas.  Of the half dozen major shows that the Gallery has run over the past couple of years, the Paolozzi retrospective and the William Kentridge filmic extravaganza were both pretty good while the Benedict Drew and Mary Heillman reviews were both pretty thin.  And as for the Electronic Superhighway thematic show, which took a look at how artists had reacted to the fantastic phenomenon of recent global infotech digitalisation, well, the scope was certainly ambitious and it must have sounded like an interesting and exciting idea when first proposed.  Sadly, however, the presentation as a whole was all a bit of a flop as the main revelation seemed to be that most artists really had no greater foresight, insight or even very much hindsight into the subject under review, beyond the platitudinous daydreaming level of analysis, about which the rest of us civilians might reasonably be able to pontificate, were we so required. 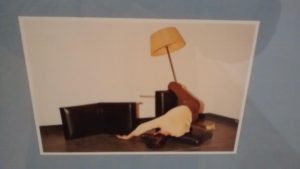 So, what is the current Whitechapel show like?  Well, good news.  This time round they’ve managed to pick a very attractive winner.  It’s not just that this fulsome exhibition of works by the German photographer Thomas Ruff, provides a thorough review of the output from a very intelligent artist and skillful technician, but it’s also rather beautifully presented and seems almost custom made to fit perfectly within the layout of the Gallery itself.  If there is one minor quibble then it’s the fact that the displays have not been organised in the kind of nice neat chronological sort of order that would have helped make it easier to see how Ruff has developed his craft and ideas over the years.  But, presumably, the curators initially tried to fit things together that way only to discover that the shape of the walls and the size of the prints weren’t sufficiently coincidental to allow for the works to be hung along a straightforward linear timeline, and so decided to forfeit that potentially more logical ordering in favour of achieving a greater overall aesthetic sweep.  And maybe that was the right decision. 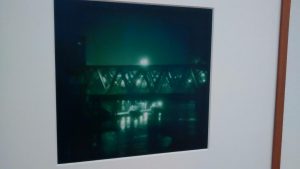 Anyway, as it is, the show starts off not with Interiors, the elegant, understated documentary record of a sequence of rooms in the houses of some of his friends (these come later), but with what the gallery guide describes with tongue-in-cheek disingenuity as a series of self-portraits. By which it means that while all of the shots in the Emperor series show Ruff installed within the same domestic set up of two leather armchairs and a lampstand, his poses are deliberately, obtusely maniacal, with his body twisted, draped and generally sprawled all over the furniture in various uncomfortably daft arrangements, all of which appear designed to misshape the body and conceal the face.  It’s a sort of semi-surrealistic subversive piece of nonsense but perhaps it does reveal some autobiographical aspects of the artist inasmuch as it shows Ruff’s preferential feelings for adopting and adapting a formalist style of presentation. And by this I mean that when he takes a photograph of an object, person or any kind of arrangement of elemental structures, he’s not particularly interested in using the captured image to reveal some truth pertaining directly to that specific object, person or arrangement, but rather has selected it to be used as one of the building blocks for subsequent use in revealing another, separate story. 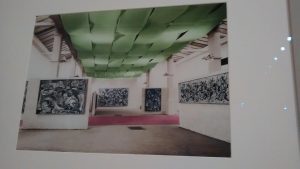 So, for instance, the dozen or so pictures that comprise Nights, a spooky tour of Dusseldorf produced using a camera adapted to take a night-vision lens, reveals very little explicit information about the city itself.  But then Ruff isn’t interested in producing a set of souvenir postcard snaps but rather offering a consideration of how the fuzzy green aura and shadowy shapes familiar from TV documentaries investigating the nocturnal habits of the natural world, or the yobbish behaviour of urban miscreants, can, of itself, create an ambience of suspense and surveillance.  In so doing, it seems that even the most mundane scenes of dull urban architecture are given a creepy, discomforting makeover while, simultaneously, those of us looking on are mysteriously transformed from viewers to voyeurs. 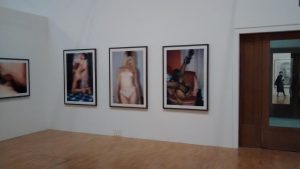 Similarly, though on a lighter, more witty note, when Ruff revisits the archival shots taken to document an exhibition of Jackson Pollock abstracts that was held in the Whitechapel Gallery back in the 1950s, he once again flips the images to disconcert his audience.  But this time it’s not the camera that’s rigged but rather a nifty case of digital darkroom trickery that keeps the paintings monochrome but adds colour to the background surrounds of walls and floors.  The results have a kind of curious sci-fi, quasi-Mondrian-like modernistic spin that seems to pastiche the centre-spreads styles of a desperately dated design magazine and, in so doing, manages to suggest just how quickly the modish styles of the future can slide into the histories of the past. 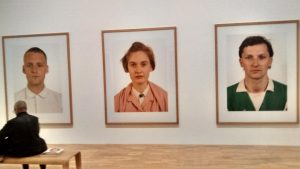 Elsewhere there’s some freshly re-pixilated pornography appropriated from the internet; a selection of re-cropped, re-edited and re-framed press photos; some giant-sized mug-shots of students, each holding the same empty blank expression; and a dozen or so other discreet sequential suites of shots, each a sort of self-reflexive investigation into one or another form of photographic practice.  Like illustrations from the theses of a class of particularly diligent academic students, the summation of all these game-playing, thought-provoking and stylishly presented photographical illuminations makes for a particularly interesting and intriguing exhibition experience. 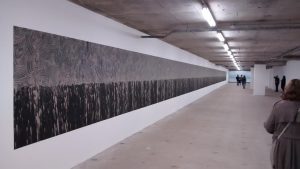 So, a good start to the day and the happy mood continues after I tube my way back into town and on to The Store, an old office block that has been stripped of furnishings and roughly gutted back to its scruffy cement sub-structure, all in order to temporarily transform itself into a spacy, three-floor art gallery with some great views out into the city.  The last show here was an entertaining and eclectic mish-mash multiplicity of different video presentations, co-ordinated together as an outreach project of the Hayward Gallery.  The current display is almost equally variegated and represents the commemorative expression of a semi-centenary’s worth of exhibitions from the Lisson Gallery, one of the more intelligent, respected and longer-lasting purveyors of post-war Modern Artistic endeavours that have graced the capital.  Shows in the Gallery are almost always worth a look, especially for those interested in the more seriously cerebral expressions of creativity, and it’s this taste for a stylish style of Conceptualistic output that is pleasantly represented in this current high-quality, mixed-group exhibition. 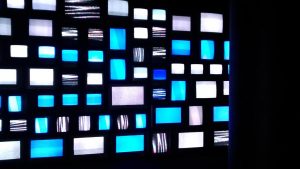 I guess about half of the twenty-five artists that have contributed works to the show are familiar, first division names, all of whose career have been helped to varying degrees by their association with the Lisson Gallery which, in itself, is quite a tribute to the perspicacity of vision, not to mention the acuity of promotional skills, of its founder and director Nicholas Logsdail.  At which point it only seems fair to list a few of the exhibition’s highlights starting off with Anish Kapoor’s giant bowler hat structure which is suspended in the air and which, when peered into, seems to extend at least part of the way to infinity and beyond.  Somewhat more grounded in earthly reality is the vast gray muralistic wall splattered mad mud markings of Richard Long and the more measured sloganeering expressed in Lawrence Weiner’s Whole Cloth Stretched to the Limit.  When it comes to moving images then Susan Hiller’s blank blue bank of a hundred flickering analogue TV screens and Julian Opie’s more restful cartoon computer game motorway ride are both fairly hypnotic.  But I think my favourite work of the whole show is one of the simplest and earliest pieces on display.  Tony Cragg’s Minster from 1987 comprises simple stacks of large, heavy-duty cog wheels all carefully balanced on top of each other in a diminishing size of gearing.  It’s a format that suggests the heavy industrial echo of some dreaming medieval spires and one that looks especially well-sited here where it provides a solid sense of stability that contrasts well with the more recent glassy mosaic of megalithic monsters that currently define the sharp edges and slick surface of the shiny cityscape beyond. 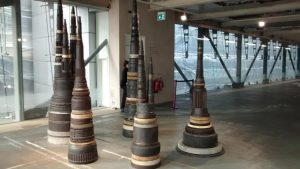