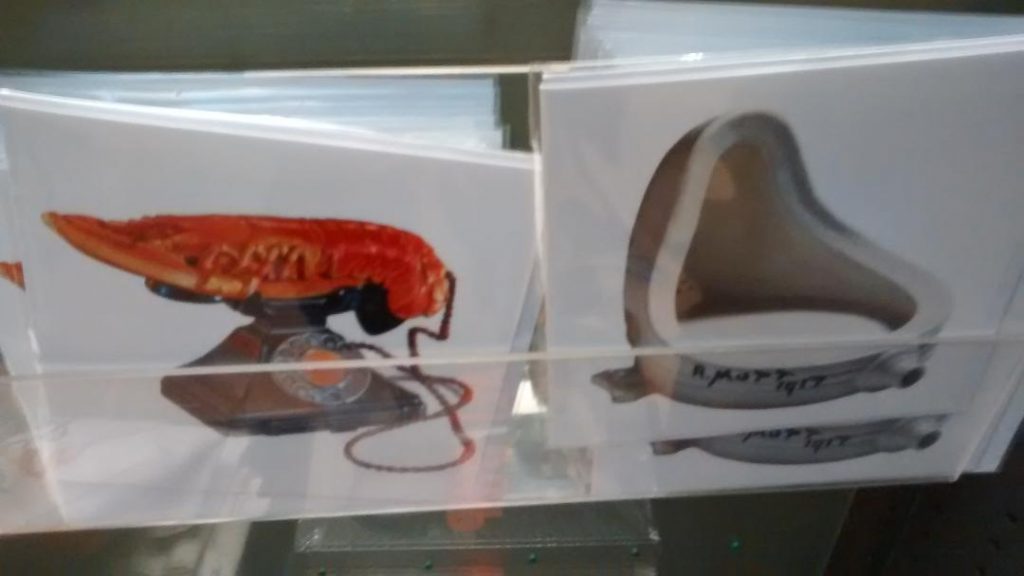 To Piccadilly tube station and then walk along to get to the Royal Academy and the Reynolds Room where Paul B Franklin – an American academic who appears to have devoted his life to researching, analysing, interpreting, proselytising and promoting the life, works and thoughts of the mighty great granddad of Dada, Marcel Duchamp – is giving a talk about The Bride Stripped Bare by the Batchelors, Even or The Large Glass to use the preferred colloquial soubriquet for this most extraordinarily extraordinary and outrageously iconic piece of symbolistic-cum-conceptualistic construction.  And, I’m pleased to be able to report, the bespectacled Harvard alumnus managed to keep an entirely straight face as he reiterated an assortment of various nonsensical Duchampian quotes and notes related to the physical, metaphysical and pataphysical creation of what he referred to as this ‘playfully scientific meditation on heterosexual desire’.  I feel fairly confident in saying that by the end of the lecture absolutely no-one in the audience or even, dare I say it, up on the podium was any the wiser whatsoever about any aspect of Duchamp’s biomorphic Heath Robinson technical drawing design contraption of an enigma wrapped in a conundrum and protectively sandwiched between two plates of cracked glass.  An outcome that I similarly suspect would have been precisely anticipated and most definitely desired by Duchamp himself.  Even so, it’s still quite amusing and somehow strangely comforting to hear someone speaking so seriously about the love gasoline and the occulist witnesses, not to mention the onanistic chocolate grinder, the impotent mallic moulds and all the other characters, devices, processes, speculations, red herrings and blue lobsters that combine to make this most magnificent manifestation of Modernist absurdity. 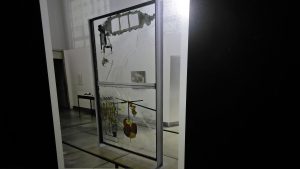 Happily, on this occasion, the unintentional humour of the lecture platform was increased by having Franklin’s nonsensical verbal exposition synchronously translated into both sign language and a textual screen projection.  Needless to say, the hands of the BSL-man were kept very busy trying to find suitable symbolic digital equivalents for some of Duchamp’s manic pseudo-scientific inventions and expressions.  And while I make no claim to be able to decipher this wonderfully strange silent language, I think that even I managed to understand the gist of the message being conveyed when the signer at one point simply shrugged his shoulders, stilled his hands and rolled his eyes skyward.  And as for the wizardry of the semi-automatic electronic speech converter, well, it revealed the limits of its AI IQ on quite a few occasions – restyling eroticism as erot criticism and transmission as trance manipulation; and then renaming Duchamp’s biographer, Calvin Tomkins, as Calvin Torch Kinson.  Best of all, though, was the delicious suggestion that on some unspecified occasion the artist Richard Hamilton, ‘…plunged a nude into Duchamp’s notes…’  I’m pretty sure that when Franklin was explaining how the British Pop Artist was engaged in the research prior to creating his authorised copy of The Large Glass he actually said something about plunging anew into the master’s scribblings, but I could be wrong and I can’t help savouring the mental image conjured up by the alternative, erot critical version. 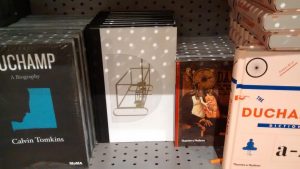 Duchamp was, of course, famous for constructing puns and enjoying word plays of all sorts so I’m sure he would have been hugely entertained by all this mis-textual silliness.  Hopefully, he would also forgive me for revivifying another piece of whimsicality related to The Large Glass, which seems to have escaped even the meticulous archival trawlings of Mr Franklin, and which occurred to me at the conclusion of the talk when the call went out for questions.  Someone asked whether anyone had ever attempted to create a piece of music based on an interpretation of The Large Glass.  Apparently not, according to Franklin, although reference was made to John Cage’s aleatory works, some of which may have been inspired by the avant garde composer’s interest in aspects of Duchamp’s investigations into chance-based art.  Sadly, time didn’t allow me to intervene and mention the crucial track by the Bonzo Dog Doo-Dah Band from their Keynsham LP that made mock of one of the other, less fashionable, sets of crooners who were also performing in the late 1960s.  But, for anyone interested in nailing down this essential arcane footnote, a quick you-tube search should bring forth a version of a hugely inventive and wonderfully amusing mix of rhythm, commentary and musique concrete that combines to create a pleasant pastiche of the experiences of a pop group performing in the insalubrious surrounds of a northern, working men’s club, and which is most ingeniously titled, The Bride Stripped Bare (by The Batchelors). 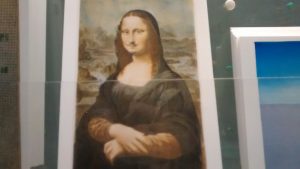 I think perhaps I’d better try to email the ‘professor’ to alert him to this too-long-forgotten work as it would form a rather nice conclusion to any similar lectures he may be thinking of giving in the future.  In the meantime, it’s time for me to take a look at the Dali-Duchamp exhibition, the main course to which the entertaining lecture has provided a teasingly savoury hors d’oeuvre of an introduction. 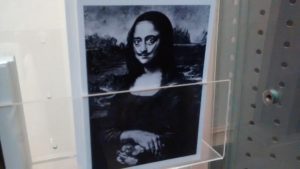 Again, this seems to be one of those curious hybrid shows that has been constructed, not as a result of the deliberate deliberations of any art historian, aesthete or theorist but, more likely, following from some committee meeting of back office staff where minutes were taken on the back of an envelope or beermat or whatever scraps of paper were to hand when the multiple rounds of large dry white libations were being poured out.  Presumably, a combo-show of works by two artists – which, a bit of googling would have confirmed, had high name recognition status – must have sounded like a good idea at the time.  But despite the best efforts of the people who have to write the gallery guides and wall panel explanations, aside from a shared interest in the erot critic and a love of relaxing by the sunny seaside coast of Cadaques, the artistic connections between Salvador and Marcel seems to me to have been really rather tenuous.  Doubtless, there was also an honest mutual respect of both artists for the professionalism and integrity of the other, but that’s about the sum of it and while the exhibition evenly intermingles works from the pair, there are precious few sparks generated, cross-connections identified or the revelation of any interesting, but otherwise previously unidentified, interlinking points of commonality. 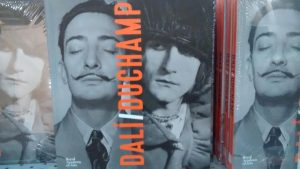 On the upside – and there are some definite pluses to be enjoyed by going along and having a quick look around the show – the curators seem to have gathered examples of authorised copies of just about all of Duchamp’s ready-mades, from the bicycle wheel on the stool to the snow shovel, bottlerack, coat stand, urinal etc etc; as well as managing to lug Hamilton’s recreation of The Large Glass down from its home at Tate Modern; and picking up a couple of early paintings and a film of the maestro chatting about the art of playing chess.  And as for Dali, who was enormously more prolific in his output of artistic works, well, there’s a small selection of exquisitely executed paintings showing all the familiar fetishistic fantasies.  So, we get to see William Tell suffering from elephantiasis of the buttocks; a dangerously flammable giraffe and various painterly optical illusions, along with a bunch of very extravagantly erot critical drawings and the dream sequence from the Hitchcock film Spellbound. 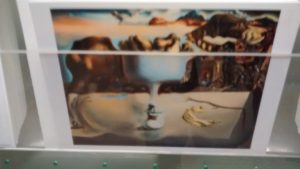 On the downside, aside from the fact that the overall conception is hopelessly flawed, the exhibition is uncomfortably squeezed into four small rooms which neither favours the viewer nor the artworks.  And I don’t suppose that Duchamp purists will be at all happy with displays that treat his icons and relics with insufficient reverence.  Even if it is only a copy, plonking the sacred Large Glass in the middle of a room and surrounding it with a clutter of movie clips and works by Dali will surely be seen as sacrilege.  Indeed, it’s hard to see how having him associated in any way with the notorious Spanish monetary mercenary and self-publicist can do anything other than threaten to tarnish the impeccable credentials of the great conceptualist sage.  And perhaps a more useful exhibition might have been one that tried to make an upward recalibration of Dali’s reputation since, for all his perceived personal failings, he was undoubtedly a hugely inventive artist and a tremendously skilful painter.  Many years ago the Hayward Gallery had a go at reframing the public’s view of Dali by focusing on his early connections with Lorca and Bunuel but perhaps pairing him up with Vermeer, Millet and Raphael, all artists he admired and emulated to varying degrees, might prove a more popular and rewarding exercise.  As for extending this fantasy curating game to Duchamp, well, it’s hard to top the Tate Modern’s show a decade ago that grouped him with his friends Picabia and Man Ray but how about widening the scope, breaking the boundaries and expanding the disciplines by placing some Duchampiana among the archival materials of, say, James Joyce and Werner Heisenberg?  That might prove interesting. 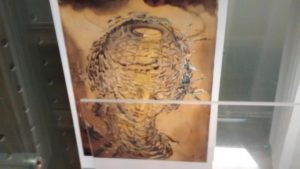