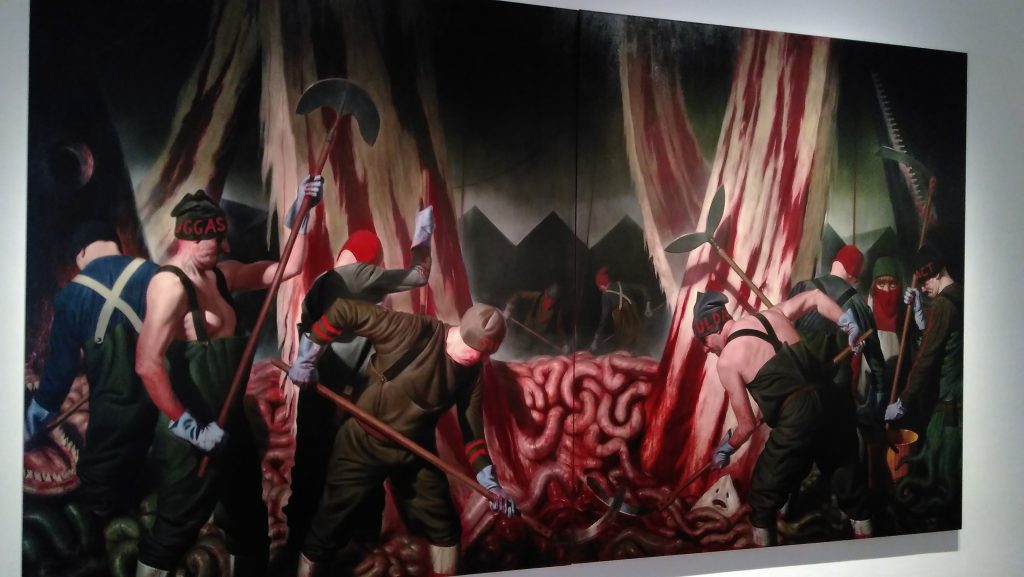 Down to Green Park tube station and then walk along Piccadilly before turning into Albermarle Street where there are a handful of commercial galleries all within close proximity of one another and which, while insufficient perhaps to generate the interconnected synergies that might evolve into a fully-fledged dynamic hub of energetic inspiration and innovation are, nevertheless, more than adequate to comprise the kind of mini-cultural cluster that means that even an unplanned visit will usually be rewarded with the discovery of at least some sight or two worthy of pausing to take a closer look.  And so it is today.  The major gallery here – largest in size, reputation and, I would guess, turnover – is Marlborough Fine Art and, I think it’s fair to say, they often put on shows that confirm the eminence of their top ranking position.  So, in recent months they’ve had large and interesting displays of works by the likes of Paula Rego, Victor Pasmore, Bacon and Freud and, most recently, an impressive display of paintings by Steven Campbell. 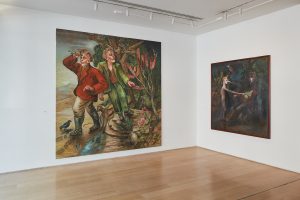 When he first emerged onto the art scene thirty or so years ago, as one of a group of young, dynamic Scottish artists, Campbell was heralded as being at the forefront in the resurgence of figurative painting in general and narrative art in particular.  But while his vast canvases with their baroque fairytale absurdities were certainly exuberant, and the semi-surrealistic content eye-catching enough to grab the attention and cause a bit of a stir, ultimately global artistic tastes pivoted away to favour a cooler, slicker quasi-conceptualistic form of Post-Modernism and Campbell was destined to join the ranks of those other shooting stars whose fortunes flared in the firmament before falling back to earth and having to settle for footnote status in the historical record of artistic endeavours.  Thanks, however, should go to the Marlborough for providing the opportunity for a timely review of Campbell’s standing even if posterity does seem perhaps to be confirming the correctness of the original critical verdict. 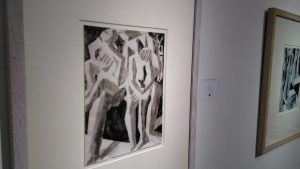 After that small digression back into the recent past, it has to be said that the current Marlborough exhibition of British Sculpture 1951-91, despite including works from Moore, Caro, Paolozzi, Lynn Chadwick and others, looks all a bit tired to me, with no great masterworks and no big surprises, and the overall display looking a bit of an uncomfortable jumble of too many different shapes, sizes and styles.  And so it is that on this occasion, the current award for the best show in the street has to go to the smaller but equally prestigious Waterhouse and Dodd for an exhibition of works by David Bomberg.  The exhibition consists of various items accumulated over a period of time by a private collector who apparently wishes to remain anonymous but who is clearly someone of some intelligence and sophisticated good taste, for while there are no great important oil paintings here, there are instead a series of very well selected sketches and drawings, designs and watercolour snatches that throw an insightful light onto the artist’s hard fought struggle to find a style and manner of presentation that would be appropriate for his time.  So, we get to see glimpses of Bomberg experimenting with representational ideas that echo the early Modernist concerns with Cubism and dimensionality while also making references to the new mechanical aesthetic associated with the technological revolution propelling so many of the changes occurring during the first half of the last century.  It was a journey of experimentation that evolved over the course of Bomberg’s career and can be seen here moving from a somewhat harsh geometrical Abstractionism to a more lyrical, but still edgy, form of Expressionism as exemplified by his later landscape drawings.  I’m not sure that Bomberg was ever really content with any of the solutions to the artistic problems that he set himself, as a result of which all his works tend to exhibit a feeling of irresolution that emphasises the sense of struggle that the artist was clearly undergoing when he was producing them.  And while I think some viewers may find the effect slightly discomforting, I quite like the idea of creatives having to work hard to try to achieve the results they’re after, and so especially appreciate a small show like this one that allows the opportunity to peer over the shoulder of the artist and examine some of his tests, trials, tribulations and general workings-out. 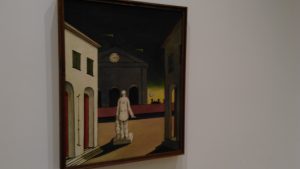 By way of contrast, next door at Tornabuoni Art, the exhibition Reading de Chirico provides a couple of dozen small oil paintings that combine to offer an attractive introduction to the various compositions and themes that the famous Italian Metaphysical artist played around with during the course of his long and productive career.  I think it’s fair to say that de Chirico was also engaged in his own personal lifelong artistic struggle and while this may not have been as intense as that with which Bomberg engaged, it nevertheless played a large part in shaping his creative decision making.  Not to put too fine a point on it, de Chirico wasn’t really very adept when it came to putting paint on canvas, by which I mean he had little natural facility for rendering facsimiles of reality, accurately making the marks of verisimilitudinal exactness or reproducing a convincing two-dimensional representation of the three-dimensional reality that we are used to seeing around us – in short, he wasn’t really much of a painter.  But then this is a characteristic shared with quite a few of the other famous names who staked out the coordinates for the Modernist mapping of 20th century figuration. Indeed, there’s an argument to be made that it was this very lack of technical ability among artists like Rousseau, Magritte, Edward Hopper, Frida Kahlo and quite a few others that helped to define the Modernistic aesthetic, requiring as it did that they produce imagery that was so powerful, memorable, distinctive and striking that the coarseness of their compositions, not to mention the awkwardness of some of their individual brushstrokes, could be very reasonably overlooked. 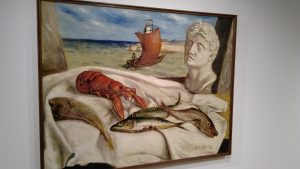 And it is very hard not to be captivated here by de Chirico’s parade of absurd mannequins, with their ovoid heads and set-square decorations, and the dreamscape portrayals of mysterious empty piazzas with their long shadows, stopped clocks and toy train sets.  It’s only when de Chirico attempts his more straightforward self-portraits or still-lifes with fruit or fish that his limitations come to light and I suppose even these have a sort of innocent naïve charm that could just about be read as souvenirs from a distorted refashioned alternative world where reality is just a little bit clumsy and haphazard. 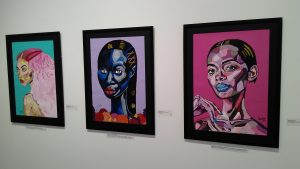 After those two shows it would be good to be able to report that the paintings by the Nigerian artist Rewa, now showing at The Gallery of African Art (which is also situated on Albermarle Street), are exemplars for the growing confidence and surety of artists emerging from within the vibrant cultures of that most exciting youthful-yet-ancient continent.  Alas, while the series of well-decorated portrait heads showing here look attractive enough, I can’t help thinking that they’re a bit too deliberately stylised, as if the artist is deliberately trying to manufacture something that might specifically appeal to a western audience.  And I wonder if a looser, more spontaneous, approach to her craft might produce works that would carry a greater impact. 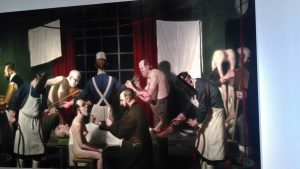 Edging away from Albermarle Street, it’s only a short walk to get to Cork Street where the Flowers gallery is staging an exhibition of the latest series of works by Ken Currie, an artist who was also one of the leading lights in the Hibernian wave that first rippled southward during the 1980s.  Unlike his compatriot Stephen Campbell, however, who seemed to delight in producing colourful cartoon mysteries with an Enid Blyton level of unusuality and threat, Currie’s narratives have always been a good deal darker, both painterly and metaphorically, and sited towards a shuddering Stephen King level of horrorful stimulation.  The current show is no exception and should probably be avoided by those of a nervous or squeamish disposition for while Currie is easily the most confident and skilled of all of the artists examined today, he seems determined to use his talents to render grimly realistic imaginings of decidedly unhappy tableaux, whether it’s a gang of shovellers excavating their way through the guts of a whale, the examination of various disabled and debilitated occupants in a creepy sanatorium or an identity parade of bruised and disfigured soldiers.. 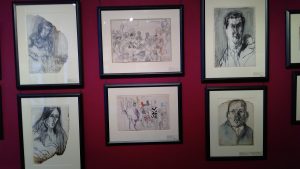 To end on a rather more cheerful note I head off to the Abbot and Holder gallery which is situated opposite the British Museum.  And here is a very entertaining little display of the famous caricature cartoons of Feliks Topolski featuring the likes of Bob Dylan, Joan Baez, John Osborne, Harold Pinter and a whole host of other luminary icons of the swinging sixties.  All are captured within the feverishly tangled spaghetti jungle of scratchy, scribbly lines that were so characteristic of Topolski’s style of documentary draftsmanship and which seemed so appropriate for evincing the energy and optimism of that happy bygone era. 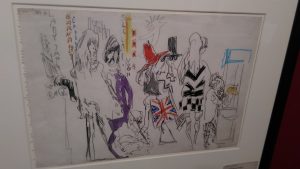