To Piccadilly station and then, once again, stroll along to the Royal Academy where the elegant statue of Sir Joshua Reynolds, the eminent portraitist, lecturer and first President of that august institution, stands proud in his breeches and frockcoat, holding a preening posture with palette in one hand and brush in the other.  But today the sightline to the pedestal upon which the great man has been rightly placed is interrupted by a cruder, bolder, flashier and altogether more preposterous lump of bronze casting in the form of an absurdly muscly man sat nude aside a great rearing horse.  Perhaps Physical Energy by George Frederic Watts looks faintly familiar and, indeed, you may have bumped into a version of this dreadfully dated metallic monster while wandering through Kensington Gardens where another version has been stuck for the past hundred years or so.  Of course, in this more leafy location it’s surrounded by swathes of trees and great grassy expanses which perhaps drain and diminish some of its bombastic power whereas confined within the much more restricted airspace of the Academy forecourt, and thrust high up upon the neat dry stone walls of a specially constructed podium, it screams out its symbolistic message.  But, inevitably, this has been twisted by time and the simple allegory intended by its author – that was something grand and heroic about celebrating ‘…that restless physical impulse to seek the still unachieved in the domain of material things’ – just seems slightly silly in today’s cynical cyber-age. 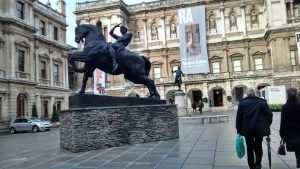 In fact, the small display panel in front of this great hulking beast, reveals that other castings of the statue are currently sited in Harare and Cape Town, as part of a memorial to once lauded imperial adventurer Cecil Rhodes, and so the current meaning of all this monstrous metalwork is more likely to be reconstructed by a contemporary audience as a warning of the dangers of hubris or perhaps an illustration of the changing nature of historical assessments, whether political or aesthetic.  After all, it’s not just the wily old colonial racist who has had his reputation digitally redefined but also Watts who at the height of his career was, quite incredibly, regarded as possibly the world’s greatest living artist and a serious rival to the Renaissance masters of the past.  It’s an opinion that no-one would seriously share today, as a visit to Tate Britain (where a couple of his paintings are usually on show), or the Watts Gallery in Compton** (where there are dozens of the things) would clearly confirm.  In fairness, Watts was a mediocre talent, able to churn out drab portraits and slabs of soppy portentous symbolistic narratives that evidently struck a chord with the taste-makers of his time.  But that time has well and truly passed.  Finally, I suppose we should spare a thought for the poor lump of beefcake who is permanently perched up on that raging horse.  Presumably in the past he must have sent thrilling illicit shivers of oscillating sensuality down and around the bustles of legions of swooning ladies while stiffening the upper lips and girding the lower loins of British gentlemen determined to do their bit for king and country, wherever and whenever the need arose.  But now, after a century of straining his abs, stretching his pecs and freezing off his brassy bits, the pose that once must have looked so sensational and so inspirational now appears quaint, camp and, frankly, just a little bit ridiculous. 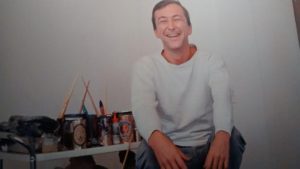 I’m not quite sure what the statue is doing in the Academy courtyard now but, hopefully, it will gallop off to the countryside sometime soon.  In the meantime, I carry on towards the main entrance where I’m met by the security team who are performing cursory searches on people’s bags.  Questioned about the contents of the small box that I happen to be carrying, I declare it to be nothing more nefarious than a Heston Blumenthal special brand Christmas Pudding which I plan to hand over to an old acquaintance after I’ve completed today’s gallery ramble. Thankfully I’m allowed to pass and presumably the guards’ sophisticated risk profiling procedures noted my sprightly gait, jaunty demeanour and M&S couture and correctly concluded that I was a harmless hack, and the only threat I posed to the Academy’s safe standing would come via the assorted barbed puns and slings of sarcastic sesquipedalianism used in my continuing mission to chip away at artworld absurdities, curatorial car crashes and exhibitionary excesses wherever I may encounter them. 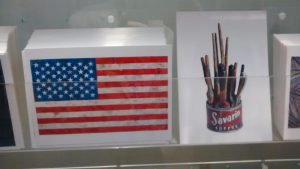 Anyway, having deposited said pud in the cloakroom, I proceed to the main course on today’s artistic menu, namely that of the Jasper Johns exhibition that has been rather gnomically titled Something Resembling Truth.  I think I made a previewing reference to the show half a dozen blogs or so ago when I first learned that it was going to be staged at the Academy.  The gist of my commentary then being that while Johns had undoubtedly come up with some very clever artistic conceits in the first couple of years of his early artistic career, he had then very obviously run out of ideas and spent the several subsequent decades making more and more revised versions of these greatest hits that added little to the concepts behind the original versions.  And that giving the artist the full ten-room retrospective accolade was kind of overdoing things when his entire output could be rather neatly and comprehensively summarised and displayed within one or two small rooms with a couple of walls to spare.

Now, having taken a look at the show I’m rather reluctant to revise the essence of my original rather cruel contention – that Johns’s period of innovatory creativity was extremely brief in comparison to his time spent on revising, revisiting, reviewing, rephrasing, restyling and repeating his opening gambits.  But, I have to concede that the curators here really have done an incredibly impressive job when it comes to displaying the artist works to their very best effect.  And while I think the last couple of rooms really do, rather sadly, emphasise the artist’s declining talents, the rest of the show is a very beautiful and thoughtful presentation that makes a convincing case for counting Johns as among the worthy greats of post-war Modernistic expression in the arts.  And that while he does repeatedly, not to say obsessively, re-reference his own works to the point of almost parodic prodigality, by careful selection from amongst the near infinity of these endless reworkings, the display manages to achieve a surprising sense of charm and warmth which is seldom associated with the somewhat ascetic nature and colour of Johns’ works and the thought processes that provide their theoretical underpinning. 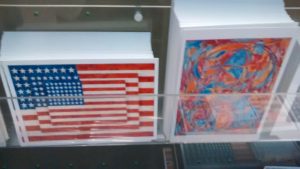 And what, one may well ask, is the nature of this conceptual scaffolding?  Well, in brief, I think Johns was one of that small group of artists* that provided the bridge leading the way from the cul-de-sac of Abstract Expressionism and on into the figurative domain of Pop Art productions.  Not that everybody thought the Abstract stuff was a bit of an artistic wrong turn.  Far from it.  It’s been a while since I read his four volumes of theoretical writing but, as far as I can recall, the great American critic Clement Greenberg thought that Pollock, de Kooning, Rothko and the rest of the gang had, by dispensing with concerns over dimensionality, steered art to its perfect logical conclusion and, therefore, its absolute artistic peak of achievement.  According to Clem the point of painting was not to try to fool the eye into thinking there was depth beyond the flat surface of the canvas, and that the use of perspective foreshortening, Impressionistic light effects, synchronous planes of Cubist multidimensionality and all the other forms of illusionistic stylistic trickery were just diversionary stages preparing the passage for the inevitable arrival of the sublime sensations awaiting those able to succumb to the transcendental experiential acme that followed from an appreciation of America’s very own Abstract Expressionism.  Johns great breakthrough came when he rather cleverly realised that there was a neat way to return to the art of figurative mark-making while simultaneously satisfying Greenberg’s insistence on fidelity to the actuality of the two-dimensional canvas or sheet of paper.  The solution was simply to stick to representing those objects from the natural world that could exist without depth – objects such as flags, maps, targets and numbers.  And so that is exactly what Johns proceeded to do…and redo…and redo…and redo and, well, I’m sure you get the picture by now.

As for specifics, the first room at the Academy starts off by showing the American flag painted in red, white and blue in encaustic on canvas, then follow the variations that include versions in black and grey acrylic, in white paint on a newspaper collage, in grey graphite pencil on paper, in oils with an orange background and so on before the game is repeated with the maps, targets and numbers.  And aside from these combinations being shuffled about a bit there’s really not much more to the show than that.  Ok, occasionally Johns thinks of a new flat object – a coat hanger, a cross-hatch design, a ruler – and he also plays with sculptural variation on his central theme by making life-size casts of everyday household objects – a couple of beer cans, some spectacles, his paint brushes – but otherwise he seems very content to plough and re-plough a furrow first tilled when Eisenhower was president.  Now, in the age of Trump, the time is surely ripe for the arrival of some 21st century Johns to show a path away from our own Post-Modern conceptualist dead end. 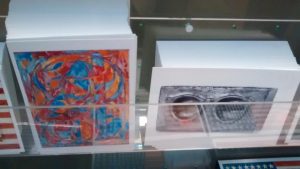 *The others being Rauschenberg in the US and Paolozzi and Hamilton in the UK, all of whom used variations of collage techniques to jump the dimensionality barrier.