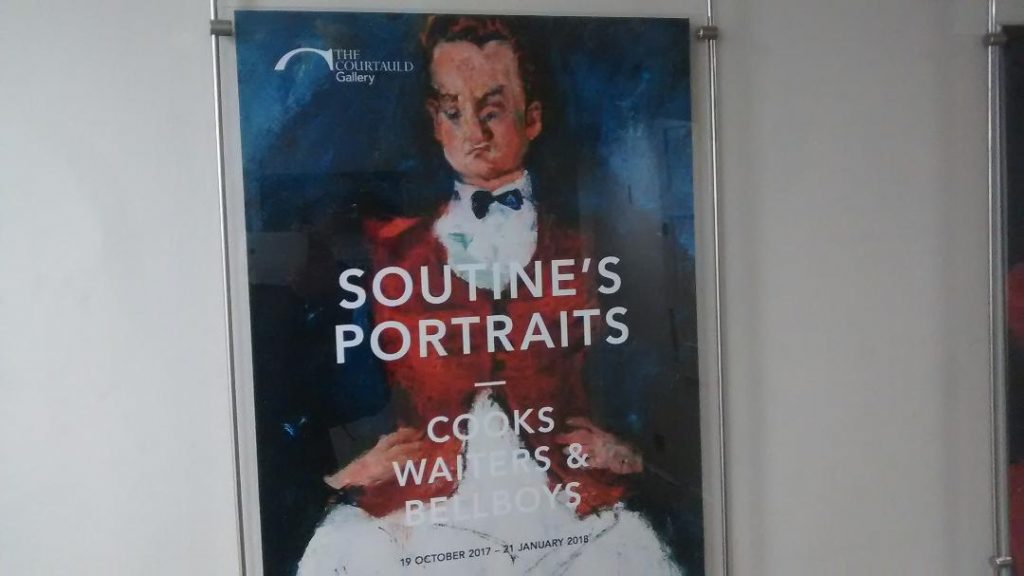 Down to Charing Cross tube station and along to the National Portrait Gallery to take a look at Cezanne Portraits.  And, unlike the Tate’s Impressionists in London – a name which, rather ironically, might very well give the wrong impression as to the actual contents of the exhibition being promoted – here is a title that, to use the common parlance, does exactly what it says on the tin.  But then the problem here, I suppose, is that the construction of curatorial conceits is an operation requiring perhaps just a little more sophisticated reflection, forward thinking and imaginative conceptualisation than that needed to apply a couple of coats of sticky viscous soup to the garden fence for its quinquennial protective makeover.  And so, at the risk of further scrambling up some already mixed metaphors and idiomatic rephrasings, I have to say that I’m not sure it was quite such a good idea anyway for the Gallery to go to all the trouble of assembling and then opening up this particular can of vermiformic wrigglers. 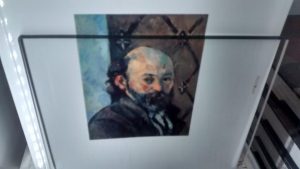 As the introductory panel to the exhibition quite rightly asserts, Cezanne’s still-lifes and landscapes are general considered to be, ‘…more central to his achievements’ than his portraits, which have been, ‘…largely overlooked’.  One can, therefore, only assume that the purpose of organising the exhibition was to provide the opportunity to underlook the paintings, or whatever the correct curatorial terminology is for reviewing a body of work with a view to revising the generally agreed opinion which, in this case, tends towards the negative end of the spectrum of aesthetic appreciation.  Of course, there’s an inherent danger in zoning in on this unfavoured work and, sure enough, what the actuality of the show provides is a fairly thorough confirmation that, for once, the critical consensus of posterity is proven to have been reasonably well founded.  Which is all a bit of a shame.  But, put simply, I think a good majority of the portraits gathered here deserve to continue being overlooked and, once they’ve been returned to the various galleries and collection from whence they came, that is almost certainly what will happen to them.  If anything, this exhibition will have settled for good the proposition that Cezanne’s best work by far was centered on his examination of inanimate objects and structures (none of which is included in this show).  And that whereas his portraits are, for the most part, clumsy, boring or unexceptional, just about all those other arrangement of apples, pears, onions, jugs and bottles, and then the fields, trees, skies and mountains are stunningly attractive.  More than that, the manner of their composition also give grist to the deconstructionist mill by providing ample opportunity for the analytical dismemberment of the structural elements that somehow combine to hold them all together so very sweetly. 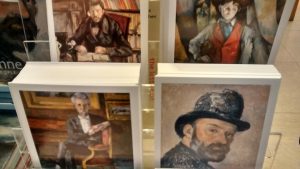 Although here I have to admit that despite looking at these paintings on walls and in books for many years, and even having had a go at decoding the theoretical writings of critics from Roger Fry onwards, I’m not sure that I have much idea about what Cezanne thought he was actually trying to achieve, other than it was probably something to do with finding a new way to collapse the dimension of space onto the plane of the canvas.  Either way, I’m not really sure it matters very much whether there ever was any coherent theoretical backing or progressive evolutionary development to Cezanne’s never ending experimentation, since the end result was that he produced so many great looking pictures.  Except…for those he created when trying to apply the same stylistic techniques to portraiture (and allegorical works like Les Grandes Baigneuses, the quite extraordinarily misconceived horror show shocker that currently resides in the National Gallery). 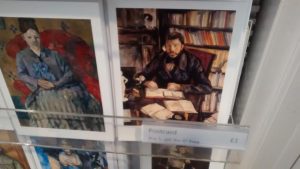 Again, according to the explanatory notes for this show, Cezanne dismissed the idea that portraiture should aim to reveal any sort of insight into the personality of the sitter, let alone any form of deeper, psychological profiling.  Instead, it seems that his focus was on trying to produce an objective account of the form of the person sat down in front of him – not, however, a simple photographic representation (which anyway was probably beyond his actual technical abilities) but rather one that somehow captured the individual flashes and flecks of the light beams falling on the features of his various subjects before they bounced their way back up along the optic nerves of the artist.  But while this approach may have worked when replicating the shimmer emerging from a bowl of fruit or the glimmer framing the sunlit topographies of southern France, I guess there must be something different happening when light strikes the lumps and bumps of the human anatomy or ripples round the folds and frills of the clothes they’re wearing.  And it definitely doesn’t work when falling up against the fleshy facial features and complicated interactions of muscular manipulations that combine to produce the forms and expressions that define the recognisable coordinates characteristic of the human visage. 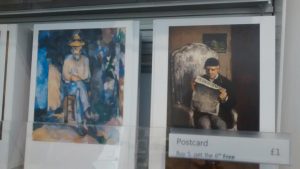 Cezanne’s ghastly early attempts at portraiture, with their great slabs of dark paint smeared on as if he’s buttering bread or plastering a wall are superseded by a noticeably lighter and less clumsy style of application.  And a couple of the paintings of his wife are actually quite pretty, even if the anatomy is, as always, all a bit haphazard and lopsided.  But then, when he tries to bring her to life by sticking on a smile his limitations are immediately revealed and the resulting pictures just makes poor, long-suffering Hortense look odd and awkward rather than being more rounded or realistic.  Perhaps all is best summed up in the painting of her sewing, in which the folds in the piece of cloth on her lap are as solid as the rocky forms of his favourite Mont Sainte Victoire, and the character performing the needlework must forever remain a mere cipher on which to lay a special sequence of shades and patterns. 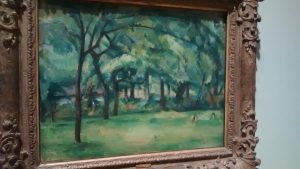 I have to admit I got a bit bored around this halfway mark in the exhibition yearning for the relief of a small bowl of fruit or some other pleasant greenery (like the picture above, which is not in this show but from the permanent collection of the Courtauld, where I’m headed next).  Suffice to say that my attention wandered and I skimmed through the rest of the show without finding very much to linger over but also feeling that maybe I was being a bit too harsh on the artist since it’s not really fair to blame him for the curators’ decision to bring so many of his relative failures and mistakes together and make such an exhibition of them.  Had the Gallery, in fact, settled for a smaller and much more careful selection of Cezanne’s works, concentrating on the dozen or so portraits where things do actually fall into place, or where there is some kind of an experimental advance, then the resulting exhibition might have been a much more educative and enjoyable experience.  But then, of course, the fantasy exhibitions constructed by armchair bloggers are unconstrained by the practicalities and commercial considerations which inevitably must govern those in charge of staging real world gallery shows, pressed as they are to try to come up with big blockbuster ideas that they hope will attract large crowds and sell lots of tickets. 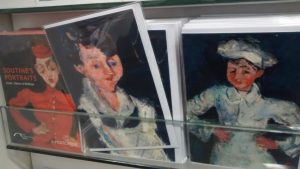 Having said that, all is very different a short walk away at the Courtauld Gallery where they consistently manage to organise compact but very intelligently collated shows that concentrate on small but well-chosen themes.  It’s been a very successful strategy recently and one that’s exemplified by the current nice chunky selection of portraits of Cooks, Waiters and Bellboys painted by Chaim Soutine in Paris during the 1920s.  And what a contrast it makes with the Cezanne show, for while his brushstrokes are tentative, with each one the result of long painful deliberation, Soutine’s look as if they’ve been sploshed on with frenetic abandon.  And yet, despite this seemingly excessively casual and insouciant approach to getting his oils onto the canvas, the results are really rather spectacularly acute and precise and carry the marks of a truly bravura performer.  A cascade of red spashes manages to perfectly outline the buttoned up waistcoat of a head waiter while, even more impressively, a flurry of white flashes just needs the addition of some blue shadowing to place the uniform on a pastrycook or waitress.  And just as Soutine casually brings to life the poses of all his characters, allowing their body language to tell their individual stories of anguish and advancement, trial and resignation, he also manages to fill in the rest of their various biographies with the few deft lines that give expression to their faces.  All are simple caricatures, and while sometimes the artist gets a bit carried away and perhaps exaggerates the features just a little too much, nevertheless the people remain utterly believable and convincing – frozen in time but brought back to life as soon as an empathetic audience turns to look at them. 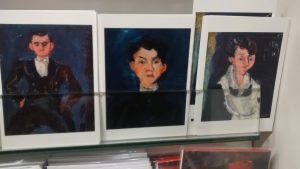 I had intended on viewing a triumvirate of portrait exhibitions today but there’s such a cold wind blowing off the Thames when I start walking towards Tate Modern to check out the Modigliani retrospective that that I decide to curtail my journey and leave the show for another time.  And anyway I’ve probably written enough for today and am starting to run out of 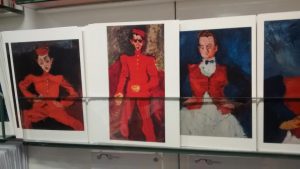