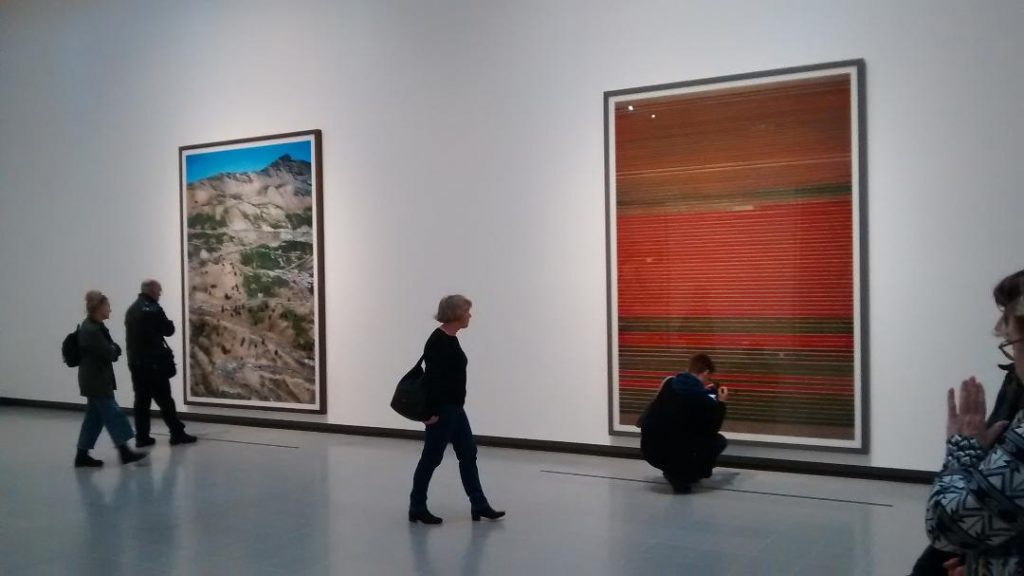 Head down to Waterloo station and then enter the concrete labyrinthine complex that is the South Bank Centre.  The rain’s been chucking it down for the past few hours and, consequently, enormous puddles of water have accumulated along parts of the grim gray walkways and stairwells that lead on to the Hayward Gallery.  Despite the fact that the whole great brutalist brute of a superstructure has been undergoing a multi-million pound refurbishment overhaul to mark the occasion of its fiftieth birthday, frankly, much of it still looks just about as tatty and unloved as I remember it the last time I was here, a couple of years ago.  Admittedly, when I get inside the actual Gallery it’s clear that things have been smartened up a bit – walls have been given a couple of coats of paint; stairs and floors are all freshly scrubbed.  But everything else looks pretty much the same and, considering the place has been shut down for so long, I think most visitors will wonder what the builders have been doing for all that time.  Ok, so the shop has moved to where the café used to be; the café has moved to where the small project space used to be; and the small project space has moved to where the shop was, but apart from this somewhat pointless merry-go-round of relocatory movements, the only other alteration seems to have been with the roofing renovation. 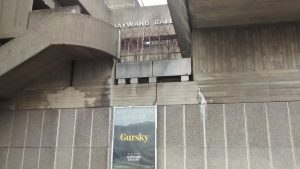 Apparently when the building was first constructed in the 1960s, contrary to the usual precepts of Modernist design, the architects decided that instead of topping things off with that most daft of all Corbusian constructs, the flat leaky roof, they would insert rows of elongated glass pyramidal structures (which, incidentally, also happened to leak).  As such, it was rather an odd kind of decorative embellishment to tack on to what is otherwise a somewhat self-consciously bleak and austere building, especially since it’s really quite difficult to get a decent view of this series of serrated vitreous pinnacles, or whatever the correct Pevsnerian architectural terminology is for what really is just an unnecessarily complicated sequence of overblown skylights.  Having wandered around the building a couple of times, I ended up having to cross over the road to the other side of Waterloo Bridge in order to take the illustrative photograph reproduced below. 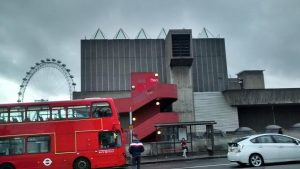 On a more practical level, I think the idea behind having a glass roof was that it would allow the upper Gallery spaces to be lit by natural light, although I’d have thought that this might have been cheaper and more effectively achieved by installing some kind of simple, pitched, greenhouse type structure.  In any case, it seems that there was some kind of practical internal problem with the pretty pyramids when they were finally glued into place – maybe they were too hard to keep clean or bits were falling off them – such that they were immediately rendered redundant by being blocked off by a separate suspended ceiling, complete with accompanying tracks of electric light fittings.  And things have stayed that way for the past half century…until now, when, at enormous effort and expense it’s been decided to revert back to the architects’ original conception and let in the light.  Consequently, visitors to the Hayward’s upper display space will now have the opportunity to elevate their gaze and discover that the false ceiling’s gone and, further, if they align themselves correctly they will be able to peer through the tunnels of angled glass and look through to the sky above.  Having done this myself, I have to say that, as an existential experience, it is perhaps just a touch underwhelming.  And as for the idea that allowing natural, gluten-free, wholemeal light beams – instead of the usual nasty, artificially-generated sub-atomic quantum particulates – to fall onto any items of art that have been judiciously placed below, will result in a more aesthetically satisfying sensation within the cerebral cortex of those lucky enough to witness the spectacle, well, I’m not entirely unconvinced.  After all, if you’re listening to Metallica or Status Quo I’m not sure it matters very much if the noise is emanating from a speedily revolving and freshly polished vinyl platter or digitised, compressed and streamed through the earphones of some dinky little shuffling apple-pod machine. 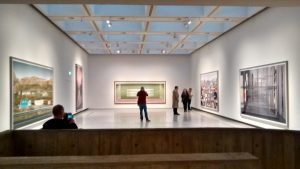 On reflection, I suppose there probably is some art that actually does repay being examined under natural conditions, and that’s the stuff that was created outside the studio, en plein air, as they say across la Manche.  So, for instance, natural lighting might well enhance the experience of enjoying the subtle chromatic variations found within some of Turner’s Venetian canalscape watercolours; and, similarly, it might add a sense of fresh air freshness to a Monet landscape; and perk up a bunch of Van Gogh sunflowers.  But I’m not sure it’s going to make much difference when looking at most contemporary art which is probably made in windowless studios under energy-saving lightbulbs and then displayed in an equally sunless white cube gallery, before ending up in an alcove in an apartment suffused by more shade than light. 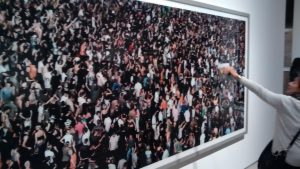 And so, bearing all that in mind, what inaugural show has the Hayward Gallery’s highly regarded director, Ralph Rugoff, decided to place within his new, expensively refurbished and light-filled exhibition space?  A sparkling parade of Post-Impressionist dazzlers?  A few tons of curvaceously carved granite, courtesy of Yorkshire’s greatest sculptor, Henry Moore, who apparently was one of the first to bemoan the lack of natural light when the Hayward first opened?  No, of course not.  Although, there are a trio of Turners on display – it’s just that they are, sadly, mere glossy reproductions; subjects within a photograph by Andreas Gursky.  For, yes, the opening show is a sort of mashed up retrospective of the work of the famous German photographer whose characteristic trademark style is the production of sharply focused, intricately detailed snaps of truly jumbo-sized proportion. 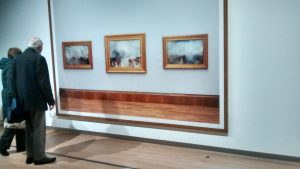 I think it’s probably fair to say that for anyone who’s not come across one of these pachydermally-sized prints before, then the first contact really can be quite breathtaking.  And for those of us who groan at paying a fortune for a tiny cartridge of ink and consequently restrict our personal printing parameters to thumbnail sketches or six-by-fours, there’s something almost wickedly indulgent about gazing onto fifty or more square feet of gloriously glossy ektachromatically engineered imagery.  And that applies whatever the subject matter, whether it’s the multiple manic traders on the Tokyo stock exchange; robotic dancers in some North Korean pantomime; supermarket shelves stacked with garish displays of pre-packaged victuals; a block of flats; a Formula One pitstop tyre change; a meandering river; or the entire continent of Antarctica.  At least, it does initially.  For, after a while – and a fairly short while at that – elephantiasis starts to set in and the law of diminishing returns begins to take effect, confirming that when just about every picture is excessively enormous, the initial impressive impact of this trick of scale starts to shrink away. 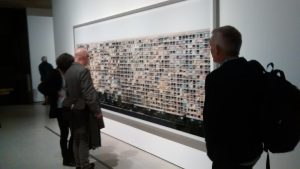 As to why the exhibition as a whole ultimately feels so disappointing and unsatisfying, I think the problems lies with the way it’s been hung.  Maybe I’ve been watching too much Miss Marple on the TV over the holiday season, but I get the sense that maybe director Rugoff planned for the show to be a straightforward, roughly chronological retrospective examination of Gursky’s output presented by way of thematic strands, each of which would be individually exemplified by a discreet display into one of the Gallery’s ten rooms.  At least, this is what I deduce from the fact that the little complementary guide booklet is subdivided neatly into sections such as Early Landscapes, Architecture, Crowds, Elevated Viewpoints and so on, each of which receives a few of paragraphs of explanatory text while making appropriate reference to specific photographs shown within the exhibition.  And if this was indeed the original plan, then I think it would have made for a much better viewing experience had they stuck with it.  But for some reason, perhaps Gursky didn’t want to be so rigidly straightjacketed this way, a decision was evidently made to rehang everything in a sort of ad hoc fashion.  So, instead of sensibly grouping similar subjects together, all are dispersed in a less structured, more randomised way.  This then results in the kind of unnecessarily uncomfortable groupings whereby, for instance, a Toys ‘R’ Us warehouse is sandwiched between a crowd of excited dealers at the Chicago Board of trade and a close up of the granite blocks that make up a wall of the great pyramid at Cheops.  It’s a display technique that almost inevitably makes the whole considerably less than the sum of its parts, which is all a bit of a pity. 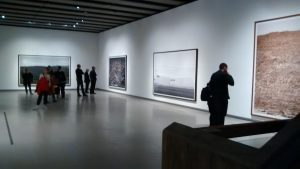 I suppose the show is kind of ok-ish, but it doesn’t exactly do Gursky or the Gallery any great favours and I can’t help thinking an opportunity has been wasted here.  Finally, switching from Marple to Sibyl, I wonder whether the inauspicious aeromantic auguries of today may well be forecasting an unsettled future ahead for a new but wayward Hayward.