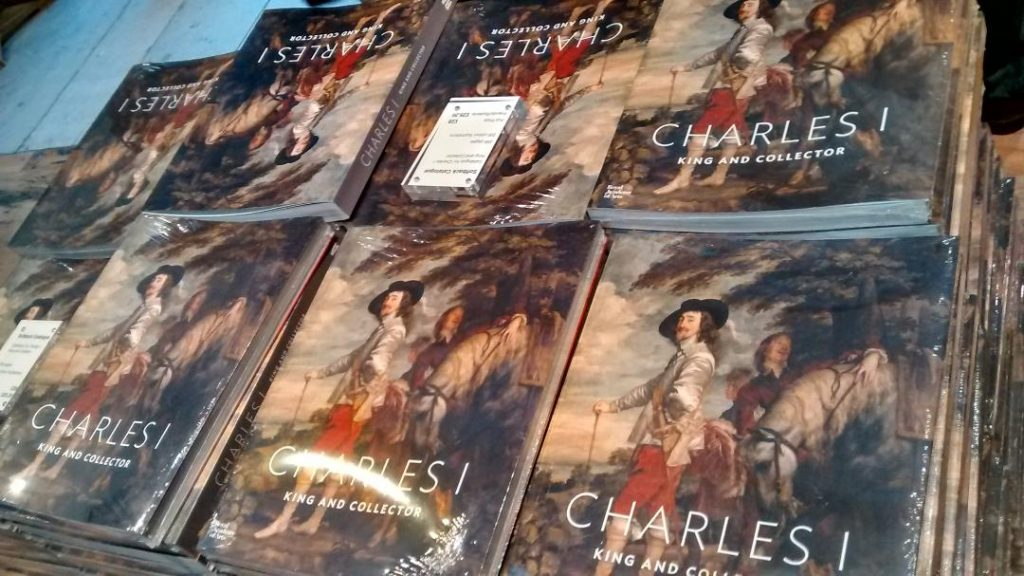 Head down to Piccadilly and on to the Royal Academy where there’s a great big banner announcing their latest exhibition:  Charles I – King and Collector.  As the subtitle suggests, the show is a sort of examination-cum-celebration of the aesthetical tastes and accumulative instincts of the monarch who famously and, as it turned out, somewhat misguidedly, considered his position safely secured by the so-called divine right of kings.  And while history proved, rather brutally, that the man was hopelessly wrong about theoretical matters of religio-monarchical doctrinal determinism, even the most ardent republican, anarchist or Corbynista Momentumite would have to concede that he had a great eye when it came to the art of buying art.  Of course, I suppose it could be argued that Charles just struck lucky in that he was born into a golden age when old masters were comparatively young and their works were still available to be snapped up by those who had the cash and contacts.  And it’s true that while today’s dictators autocrats and oligarchs are forced to try to outbid each other to get hold of the latest Van Gogh, Picasso or Warhol, that comes on the market, Charles was able to send agents over to the Continent to bulk buy Titians and Tintorettos, Holbeins and Durers. 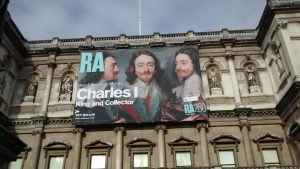 Nevertheless, as this exhibition – in which the curators have attempted to reassemble a representative chunk of Charles’ original regal collection – repeatedly shows, he really did make some very shrewd choices when it came to spending his money on decorating the various castles and palaces in which he, his family and entourage held court.  Ok, so it wasn’t exactly his own, hard-earned cash that was being spent, but rather the funds involuntarily donated by his wretched, downtrodden peasant subjects.  But I’m sure that their own sense of national pride would have been appropriately bolstered by knowing that the insides of these great regal residencies, which they were never ever going to get to see, looked absolutely fabulous and would have impressed any of the aristos, court flunkeys or visiting ambassadors who did get invited in to wander through their endless corridors. 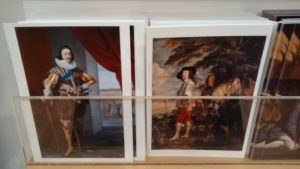 Of course, Charles wasn’t just fortunate in having the timely opportunity to buy up Renaissance masterworks from the previous century, since the contemporary artists from his own time, from whom he commissioned and acquired brand new works, included those two great Flemish anglophile painters, Peter Paul Rubens and Anthony van Dyck, with the latter being employed as the King’s own, personal portrait painter.  So, by contrast, while our own current dear old Queen has had to put up with getting a tiny Lucien Freud daubing that made her look a bit like a grumpy chipmunk, not to mention having to suffer the indignity of gurning for an Annie Leibovitz photo-shoot, a click of the Caroline digits would have summoned forth the great van Dyck to bash out yet another amazing painting of his patron. 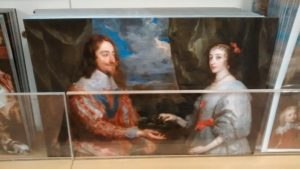 Speaking of which, the first of these official portraits to appear in the current show is the famous shot that shows Charles in triplicate – right profile, full face and then left three-quarters.  This, it turns out, was specifically created to give an all-round, 3-D impression of the King in order that the Italian sculptor Bernini could chisel out a precision made marble bust (which he did, although it subsequently got destroyed in a fire).  But there are other, much larger, full length portraits on show here that variously deck the King out in regal regalia, stick him atop a horse, line him up with the kids or sit him down to receive a symbolic laurel garland from Henrietta Maria, his French born Queen.  With his long hippy hair, twirly tash and pointed goatee beard, the King is instantly recognisable in all the paintings and decked out in a variety of frilly ruffs, furry cloaks and flashy silk togs, it’s hard not to think that he must have really rather enjoyed the trappings, sartorial and otherwise, that went with the highness of his Highness’s elevated position.  Although, having said all that, the man never looks entirely comfortable and confident, and in a simple chalk sketch that van Dyck clearly drew direct from life, it’s just perhaps possible to see into the eyes of a man who maybe deep down knew the actual precariousness of his true position within the nation’s political hierarchy. 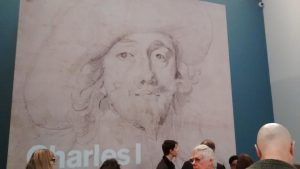 Whatever the case, when the going was still good, it’s obvious that nothing could curb the royal enthusiasm for trying to fill up all the acres of available palatial wall space with the very best of what was on offer at the time.  And while this did, rather conveniently, include a good selection of self-aggrandising pictures of the royal personage himself, judging by what’s on display in this show Charles seems to have had something of a penchant for portraiture in general.  And there are some great examples here ranging from a simple yet hugely poignant Rembrandt painting of an old woman (possibly the artist’s mother), to one of Velazquez’s versions of the drippy looking Philip IV of Spain, and from a sequence of subtle chalk sketches by Holbein to a pair of perky van Dyck self-portraits. 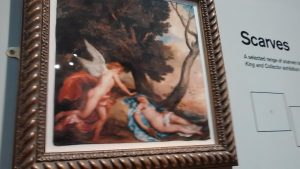 As for the other genres, in keeping with the tastes and styles of the times, Charles mainly seems to have favoured allegorical stories from classical mythology and illustrative scenes of Christian religiosity.  So, there are plenty of spectacles of voluptuary excess that would have titillated the sensibilities of the cavalier class while doubtless outraging the morally censorious mindset of the more righteously rounder-headed religionists.  Not least among these is the wonderfully extravagant combination of brazenly fleshy pulchritudinousness and shiny steel resolution that comes together in Ruben’s dramatic narrative Peace and War whereby Minerva strives to protect Pax from Mars.  Other appearance of Venus and her pals come courtesy of Correggio and Veronese but honours for the most seriously sensual rendition of an Ovidian scene have to go to that amazing van Dyck man for his portrayal of the moment when sweet innocent Psyche is discovered asleep in a bower sans vestments by a white-winged Cupid who is similarly underdressed. 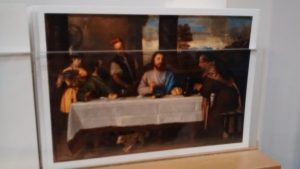 When it comes to the Biblical scenes, the most arresting work is probably Titian’s painting of the Supper at Emmaus which shows Christ reprising his pose from Leonardo’s earlier supper snacking tableau, albeit with fewer dining companions.  But then the suite of large Gentileschis showing Lot’s daughters, Potifar’s wife and Moses in a basket are all delivered with a cool, crisp clarity that is really quite refreshing, and Tintoretto’s presentation of Esther before Ahasuerus is a wonderfully dramatic example of narrative revelation, albeit of a somewhat obscure episode of theological exposition.  Largest of all the religious works on display here are four of the enormous Mortlake Tapestries that use designs based on Raphael’s Acts of the Apostles and while much of the colour has faded away and the scenes are again a bit arcane – I recognised the one about the miraculous catch of fish but for the life of me can’t recall what Ananias was dreaming about, why Elymas was blinded and what got sacrificed at Lystra  – they still look rather dynamic and the sheer scale inevitably makes them look impressive. 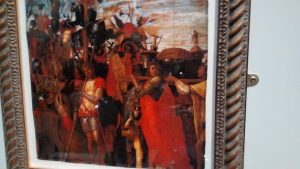 Even more grand, however, are the colossal sequence of panels from Mantegna’s masterpiece The Triumph of Caesar, which shows the Emperor entering Rome preceded by assorted bands of trumpeters and trophy-bearers, horses and elephants, and various other soldiers and servants carrying banners and tributes in what must be the classical equivalent of a cross between a military march and a May Day parade.  Evidently the paintings are a bit on the delicate side as the lighting has been dimmed to levels of gloominess that make it hard to really figure out who all the characters are and what they’re doing.  And, I have to confess, that I had to get one of the gallery attendants to point out to me which one was Caesar who, considering the whole parade was being held in his honour, was almost lost in the crowds and curiously, counter-intuitively presented in a notably modest, unassuming and laid back pose – quite unlike the appearance of Charles in the van Dyck portraits mentioned before.  At which point I suppose it might be apt to compare and contrast the fates that befell these two rulers and the subsequent histories that then followed their bloody demise but I think that’s probably outside my area of expertise and anyway, I’m starting to run out of space. 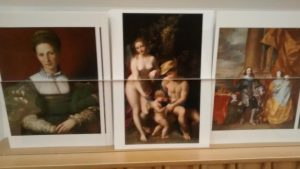 Consequently, while I could carry on listing individual paintings that deserve special mention, hopefully I’ve managed to convey the idea there are so many exceptional highlights that it’s probably easier to reiterate the fact that true, top quality works are to be noted at just about every turn upon entering each of the dozen separate rooms.  And that while some of these are familiar old favourites, there are also many that are new and very welcome discoveries and, all in all, the show offers a very enjoyable sensory experience and is definitely worth a couple of return visits. 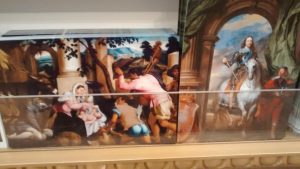 Not long after Charles unfortunate decapitation the whole of the royal collection was sold off, with various paintings ending up in the Louvre, the Prado and the other assorted museums and galleries from which they’re now been temporarily returned.  Although, judging by the current show, a substantial number of works were also bought back when the monarchy was restored after Cromwell’s brief interregnum since, as the labels confirm, a lot of the best stuff on show comes courtesy of the current collection of HMQE2.  Doubtless, in a couple of year’s time, the Corbynite revolution will come and after everything else has been rationalised and renationalised a future King Charles will be persuaded to resign and place these pictures and all the other royal booty that’s been accumulated over the centuries into public ownership and so allow the whole lovely lot to be put on permanent free display for the edification of the new citizen masses. 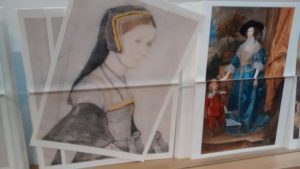