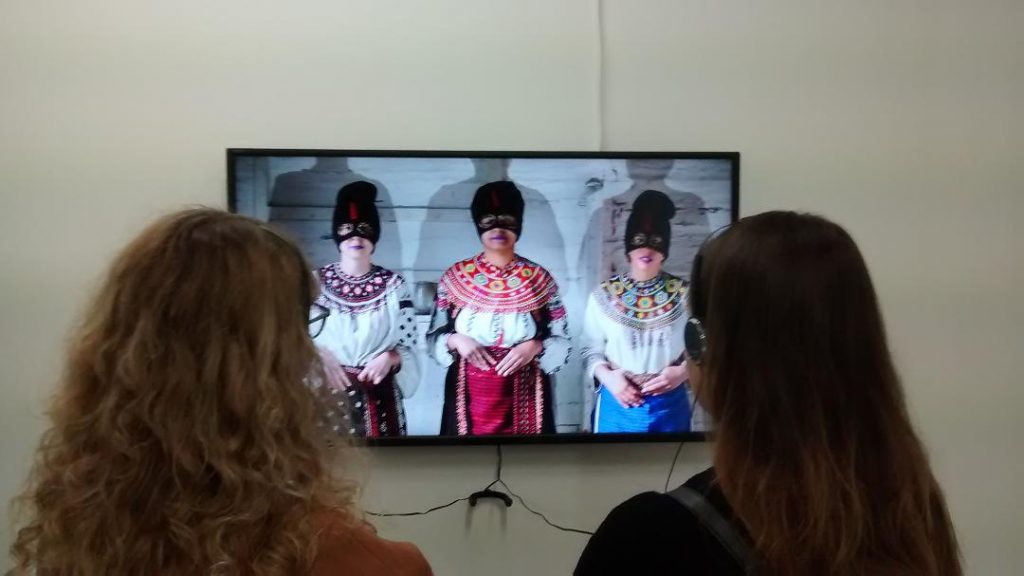 First of all apologies for some problems with the service delivery over the past few months.  It seems that some subscribers weren’t getting the email alerts advising when a new blog had been posted and then, as a result of trying to fix the problem, other subscribers ended up getting multiple alerts and duplicate blogs.  According to the dedicated subcontracted technical support departmental division of the Unvarnished publishing and media empire, the cause of all the hassle was down to the mighty Microsoft autocracy making some unannounced artificially unintelligent change to a web protocol – or something like that.  Evidently, it appears that instead of directing their attention to trying to disrupt the enterprising working websites of all the pornographers, flim-flam merchants, terrorists and purveyors of fake news, the arbiters of cyberspace security decided to prioritise their efforts on a campaign to curb the discursive ramblings of the free-thinkers pushing at the boundaries of contemporary critical discourse.  Well, we grey-haired grumpy outliers, hovering around the fringes of the artworld and grumbling advice from the sidelines, decline to accept that our opinions should be classified as spam and censored by the algorithmic designations of some glossily-maned West coast teenage surfer slacker cybernaut simpleton.  Anyway, technical counter-measures have now been put into operation that should, at least temporarily, have sorted out the problem and returned blogging services to acceptable levels of ranting normality.  And so, hopefully, from now on, regular email alerts will be dispatched on Saturday mornings to announce that the latest Unvarnished blog has been launched into the ever-expanding etherspheric universe for the edification of all those in search of artistic enlightenment. 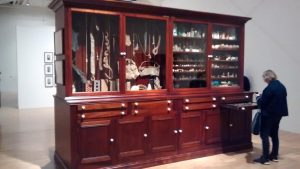 Although, having said all that, I feel obliged to issue a forewarning to advise that despite the best exploratory efforts of your dedicated correspondent, and the large, chilly distances travelled during the course of this week’s trans-capitaline trek, pickings were a bit thin and, sadly, no great artistic revelatory discoveries were uncovered.  But let’s start at the beginning, which means a tube ride out to Aldgate East and that part of London where the superslick office of the City, with a capitalistic capital ‘C’, bump abruptly up against the edges of the older remnants and shabbier sections of the grimy East End.  In other words, today’s journey starts out at the Whitechapel Gallery which has given over its two large main galleries to a series of installations by Mark Dion. 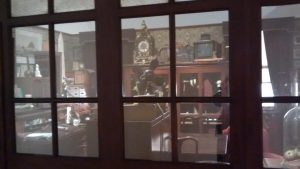 I think it’s fair to say that Dion’s artistic creations are built around a sort of subversive, Post-Modernistic pastiche of the kind of curatorial and presentational forms and formats traditionally used by naturalists and other related members of the scientific and museological communities.  So, the displays here feature elaborate simulacra of what purport to be the semi-camouflaged huts and hideouts used by ornithologists to spy on their avian targets, alongside more generalised arrangements of glass cases, display cabinets, stacks of books, illustrative documentary photographs and other assorted pseudo-scientific ephemera.  I suppose much of the general aesthetic tone harks back to the libraries and studies of eminent Victorian amateurs like Darwin, Lyle, and Huxley who played seminal roles in providing the classificatory taxonomic superstructure and forensic scientific theorising that was such an important part of that time of rationalistic experimentation and investigation.  Except, I think, that Dion’s imaginative mythical recreations are not made as any kind of homage to celebrate the incredible intellectual achievements made by the great bewhiskered natural philosophers of an earlier age but rather to question what they were all up to and offer a more general, critical commentary on scientific paradigms and their relation to the wider sociological constructs of the time and…well…er…that sort of a thing.  Although, to be frank, I’m not really exactly sure what it is that Dion is trying to critique nor what he hopes his audience will gain from peeking inside his mocked up wooden huts or mentally rummaging through all the carefully constructed clutter of trophies and specimens, crockery and soft furnishing that lie within.  And as for the specially constructed aviary, that comes complete with live zebra finches that flap and buzz about, I have to admit my main thought was wondering how they go about clearing up all the birdshit at the bottom of the cage each day.  Without wanting to appear to be too much of an old farty arty party pooper, I can’t help thinking that instead of gazing at all of Dion’s fake news versions of real life scientific props and peripherals, the more discerning viewer might be better directed towards looking at the actual original versions of all this interesting stuff by taking a trip over to the Wellcome Collection displays near Euston or the proper museums that line Exhibition Road in South Kensington. 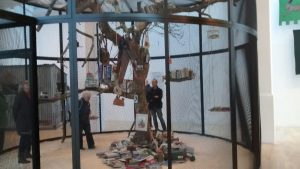 And, in retrospect, I rather wish that I’d heeded my own advice and headed out in that direction rather than going north to Finchley Road tube station and then plodding my way up the hill to get to the Camden Arts Centre to see the work of the relatively obscure and somewhat minor Italian minimalist, Giorgio Griffa. Now, I’m sure that the octogenarian artist is a charming man and that the sincerity and dedication he has shown to formulating his particular style of painting is utterly admirable but, to be brutally honest, while his work is competent and mildly diverting it’s just doesn’t strike me as being particularly special and I certainly don’t think that it warrants being given all three of the Centre’s rooms for its display.  It would be overstating it a bit to say that once you’ve seen one Griffa, you’ve pretty much seen them all but after you’ve seen a couple you’ve certainly got a very firm handle on the house style.  Ok, so there’s quite a bit of variation but basically his unchanging modus operandi, seems to be to get a large spread of raw canvas, stick it on the wall and then dab on some lines of muted pastel paint.  The results are quite pleasant but I’m not sure that they deserve very much more than that level of fairly faint praise. 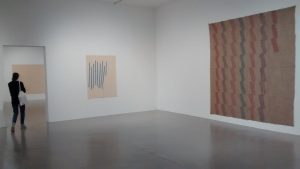 And as I plodded my way back down the hill to return to the tube station, the only thoughts in my mind were nothing to do with the aesthetics of any of the actual paintings that I’d just seen, but trying to figure out why on earth this particular artist had been honoured with having been given the opportunity for such a large and unnecessary display of his works. A gallery leaflet accompanying the exhibition acknowledges support from Casey Kaplan, the commercial gallery in New York where Griffa shows his work and who were presumably utterly delighted to have the opportunity of trying to raise his international profile by being given the chance to show in the UK.  But, frankly, I’m not convinced that the roll of a grant-funded, charity-status gallery such as the Camden Arts Centre is to act as a promotional vehicle in this way.  And if the relatively new gallery director, Martin Clark, wanted to show the work of a mid-ranking minimalist then surely there must be dozens in London who don’t have commercial representation and who would have been only too pleased to present their works to the world.  And it’s hard to believe this would have resulted in any less substantial an exhibition than the current one.  Or, better still, why not round up a bunch of overlooked British abstractionists and curate a proper survey show examining different strands of the style; or make a chronological display showing how the form has evolved over the past half century.  Maybe I’m just being hopelessly naïve and that financial and logistical considerations now mean that the cheapest, simplest and most practical way of covering the walls of Camden Arts Centre is to ring up some commercial American gallery, ask which of their stable of artists is in need of a push and get them to send over a selection of their canvases. 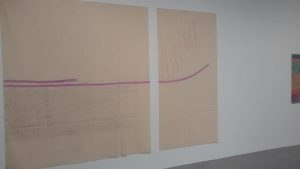 And so, with that rather depressingly dismal thought in mind, I travel south to get to the final disappointing destination on today’s unhappy itinerary and reach Block 336, which is hosting the Bloomberg New Contemporaries exhibition.  This is the regular survey show that looks at the work of recent graduates from the nation’s art schools and colleges and, as such, prides itself on providing a sort of cutting edge insight into the zeitgesity stuff that is currently concerning the youth of today.  Except that every time I get around to visiting one of these New Contemporary shows I’m always shocked and surprised at how nothing ever shocks or surprises me.  Everything always seems to look vaguely familiar, as if I’ve seen it all before and, frankly, I can’t remember the last time when I was hit by any new idea or format or style or presentation.  Instead of novelty and invention, the kids today just seem to be happy treading water and half-heartedly recycling tired old versions of what’s gone before.  So, there’s the usual mix of crude, unskilled paintings; random assemblages of junky detritus and a selection of slick videos using the language and formats of Saturday evening TV shows to make parody versions of documentaries, adverts, dramas, and variety shows.  In other words, it’s all a bit dull and, to paraphrase Oscar Wilde, my old-fashioned respect for the young is fast dying out. 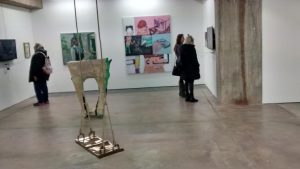