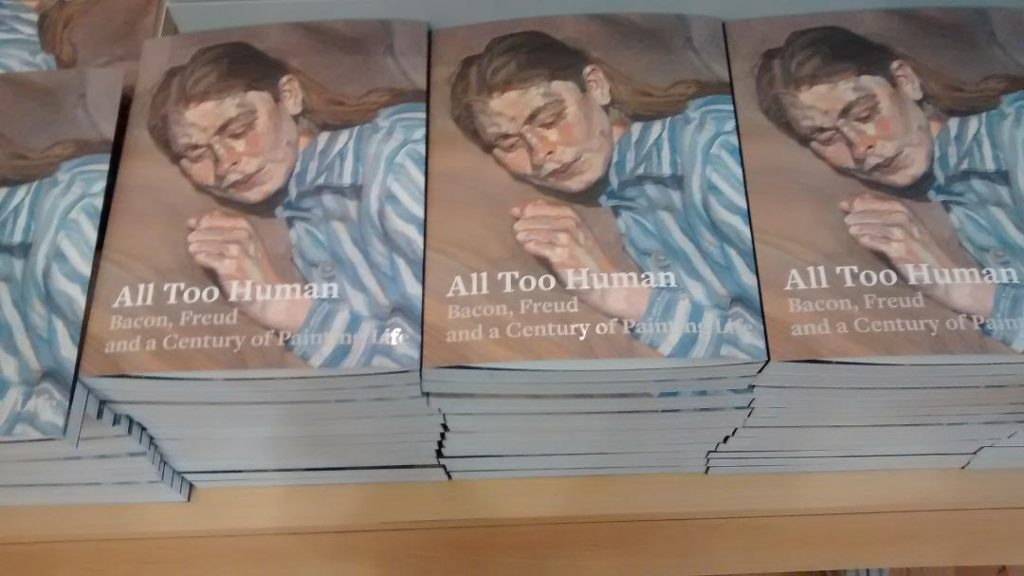 Down to Pimlico and round to Tate Britain to take a look at their latest show All Too Human which – since it’s occupying a dozen rooms of the main display area and running for the next six months right through until the end of August – must, I suppose, be intended as the gallery’s major exhibition offering for 2018.  And if anyone senses that my opening sentence sounds just a little bit downbeat and carries with it a semi-subliminal hint of the kind of latent disappointment that presages a gloomy couple of pages of disapprobatory bloggery, well, they’d be absolutely right.  For, with heavy heart, I have to admit that the aim of my not so subtle spoiler alert is to forewarn that the Tate has managed to assemble what I think can only really reasonably be designated as a particularly poorly curated shambles of a show. 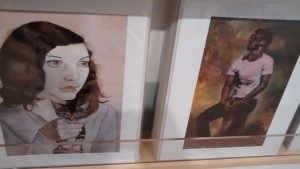 Now, I have to admit that having written quite a number of reviews and blogs over the years I’ve always quite enjoyed pointing out the motes in other people vision while thinking up sarcastic put-downs and hurling out barrages of critical brickbats, especially since the launch pad bunker for these droning drone attacks is safely secure from any chance of receiving reciprocated return fire.  And I tend to think that venting one’s spleen by bashing out a couple of hundred carefully crafted words of disparagement is a rather less expensive method for gaining the kind of cathartic release that others achieve through ingesting psychotropic medicines or entering into the discursive talking cures of analytical therapists.  But then, as the decades pass by, one comes to accept that the slow transition from angry young man into the grumpy old man is accompanied by a certain mellowing of the synapses and that while the frequency of encountering life’s irritants and disappointments resolutely refuses to diminish, the impact of these insultive incursions provokes a more moderate response.  And, in fact, the occasional but regular ingestion of small quantities of gin and tonic can make them fade away almost entire but…er…where was I? Oh yes, what I’m trying to get around to saying is that while it’s easy and entertaining to get cheap laughs from just being rude about someone’s artistic attempts or metaphorically bashing a hapless curator on the bonce for misorganising yet another exhibition, I really would much prefer to see challenging art and intellectually stimulating shows and then hand out the appropriately big bouquets and hearty recommendations.  And, frankly, the thought of now having to bother to pick through the grisly carcass of this current Tate show and perform an autopsy to itemise the precise causes of its dismal demise, fills me with nothing but gloom. 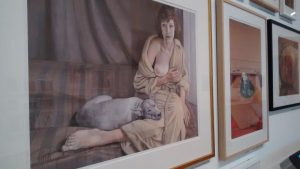 So, before getting down to the details of what it is that make the new exhibition such an object lesson in incoherency, it might be worth considering whether the exhibition is just an unhappy curatorial blip or rather the symptom of a larger, more general institutional problem.  After all, the last couple of big displays at Tate Britain have also been duffers.  Both the Impressionists in London (which is just about to end its run in the other big suite of rooms the Tate uses to house temporary shows), and the Rachel Whiteread retrospective must have looked good on paper and, indeed, had the potential to be interesting and illuminating exhibitions.  And yet both curdled into failures somewhere between the scoping that inspired their initial formulation and the curatorial pre-planning, researches and later logistical practicalities that concluded in their unfortunate presentations.  Broadly speaking, the former crashed because the show declined to explore the exhibition’s theme with any very real intellectual or academic rigor, while the latter was let down by the misconceived decision to bunch all the artist’s work together in one enormous messy open-plan display.  And this suggests to me that the problem lies not just with individual curatorial failings on the lower rungs of the organisation’s hierarchical structure but deeper problems situated right up among the celestial echelons of the upper tiers on the managerial organigram.  Which, in turn, makes me wonder whether this current poor run of shows – especially since they follow on from the Hockney and Nash retrospectives, which were comparative successes and certainly curated with a decent enough degree of professional competency – is coincident with the relatively recent regime change initiated by the departure of the Tate’s former panjandrumic supremo Nicholas Serota following his three decades in the hot seat. 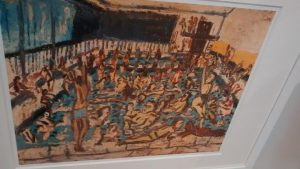 As it happens, those of us who are interested in such matters may not have to wait too long to find out the direction of travel, since next month sees the opening of Van Gogh in Britain, Tate Britain’s other major exhibition that’s running this year.  Again, this is a show that definitely sounds good in theory but will it look good in practice?  Hopefully the opportunity will be taken to take a sensible, serious, scholarly look at how the artist’s brief sojourn in this country impacted on his contemporary work and subsequent stylistic developments.  The unhappy, but perhaps more likely alternative, however, would be for the Tate to follow the National Gallery’s lead, compromising the integrity of what could be a small but interesting and insightful academic investigation by padding it out with minor works and trying to turn it into a high-entry-charge, so-called blockbuster show.  In which case expect to see a handful of top quality Van Goghs dispersed amongst a stack of familiar works on loan from various provincial galleries around the country and subsumed under a tide of other, tangentially-related items dragged up rom the dusty storage vaults of their own permanent collection.  Time will tell. 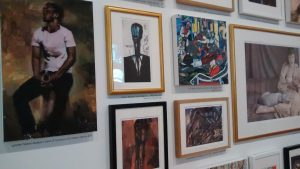 But back to the present and All Too Human which again has one of those annoying, slightly deliberately disingenuously misleading subtitles in the form of Bacon, Freud and a Century of Painting Life.  Maybe I’m naïve and take these things too literally but surely this titular wording suggests that the exhibition is an examination of the private and public, aesthetic and artistic relationship between two of this country’s very few internationally recognised modern artists.  But while it’s true that there are a dozen or so works from both of them in the show (the Freuds are, on the whole, pretty good quality examples of his output while, sadly, most of the Bacons are all a bit second division stuff), there’s no attempt to set up any kind of real dialogue between them and, anyway, their paintings are just sort of gathered together and then plonked down in rooms interspersed amongst other displays by other artists who had nothing in common with either of them. 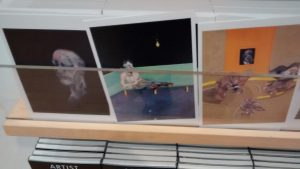 So, having ascertained that the exhibition isn’t a chronological compare and contrast exercise centered around the two titans of British art, what is the thematic thread or narrative proposition that links the works of the twenty or so disparate artists whose works have been so curiously corralled together?  Well, aside from the fact that everything seems to follow within a realist or semi-realistic tradition, I have to admit that even after walking through all the rooms, looking at all the paintings (plus one solitary Giocometti sculpture that’s mysteriously crept in) and scanning through the little gallery guide I’m still not entirely sure.  So let’s go back to the very first room and try again to figure out the puzzle, starting off with the question of what it is that links the four artists featured in this opening overturistic salvo. 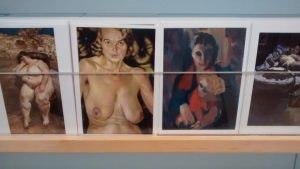 And the artists are:  Walter Sickert, Chaim Soutine, David Bomberg and Stanley Spencer.  Ok, so all are figurative painters but if the intensely dark, intimate style of Sickert follows on down from an Impressionist tradition, Soutine’s wildly vivacious caricatures are boldly Expressionistic.  And if Bomberg is forever trying to somehow represent the metaphysical inner structures of the people and landscapes around him, Spencer is famous for the very literal relocation of New Testament narratives into his parochial contemporary surroundings – although the works chosen here are the less familiar, brutally honest portraits of his cruel companion Patricia Preece.  So, all in all, four rather separate strands of art covering a diversity of different styles, themes and techniques and I’m still not sure what the point is of putting them all together, it’s not as if they’re somehow recognised in the canon as being the four key seminal artists of their times.  I could understand the logic of starting a French show with the Post-Impressionist trio of Van Gogh, Seurat and Cezanne and then showing how they influenced everything that followed them but while Bomberg had important students (like Auerbach and Kossoff, whose work does appear half a dozen rooms later on) and Sickert founded the Camden Town Group (whose other members are entirely unrepresented here) the remaining pair were essentially loners without antecedents.  In which case why choose them and not, say, LS Lowry, Matthew Smith, or Leonora Carrington as representing the figurative strands of Parochialism, Fauvism and Surrealism?  But then the show is clearly not meant to be a comprehensive examination of the realistic format in this country since Soutine never crossed the Channel and Pop Artists like Blake and Hockney are absent, never mind Neo-Romantics like Piper or Sutherland, Kitchen Sinkists like Bratby and Middleditch or other individualists like Elizabeth Frink, Craigie Aitchison, John Keane, Julian Opie and…  In fact the list is pretty well endless, which is one of the reasons why an exhibition such as this needs a more consistent defining sense of purpose to give it some kind of value beyond being just a randomised curatorial curate’s egg of a very scrambled nature. 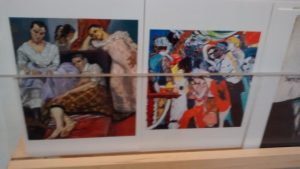 The best the gallery booklet can do is to say that the works on show in the opening section were created when the artists, ‘…were each working directly from life or from their own drawings’.  Which is about as feeble and otiose a statement of the absolutely bleeding obvious and irrelevant as any I’ve heard, though entirely in keeping with the general statement about the exhibition that it, ‘…explores how artists have stretched the possibilities of paint in order to capture life around them’. To which I can only think of offering the Simsonian response of Doh!  And at which point exasperation sets in completely and I just can’t be bothered to try to deconstruct any further the peculiar rationale behind the rest of the displays.  Suffice to say there are some good individual works from Kitaj, Coldstream, Uglow, Michael Andrews, Paula Rego, Jenny Saville and others although none gain from their being so gratuitously grouped together.  And since many of the works come from the Tate’s permanent collection, and would otherwise be free to see, it seems a bit of a cheek to charge to look at them now.  Finally, the show closes with another odd selection of unexceptional works from a handful of contemporary figurative painters and so provides the cue for my exiting this unfortunate show and heading off in search of a nice tall g&t. 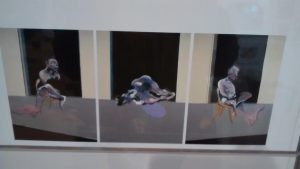