Head on down to Oxford Circus and emerge from the underground straight into the icy blasts of a wind that has, at least according to the TV meteorologists, hurtled itself here non-stop across the tundra and over the Urals, all the way from the dismal dystopian depths of the eternal Siberian winter.  Doubtless this is yet another devious Putinian plot to try to destablise and undermine the integrity of our Western democratic institutions.  But I’m happy to inform the Russian bruinski bear that it takes more than just a chilly south-easterly and some flakes of snow to make a snowflake out of this intrepid reporter.  And so I simply grit my teeth, gird my loins, button down my overcoat, muss up my muffler, adjust my beanie to cover all the aural extremities and stride off undaunted in the direction of the Photographers’ Gallery…making sure to arrive before midday in order to avoid the entry charge that kicks in once the post-meridional cusp has been passed.  And I’m pleased to be able to report that the climate once inside is really rather pleasantly temperate, although the exhibitions on display are perhaps positioned towards the cooler end of the climacto-aesthetic range of possibilities. 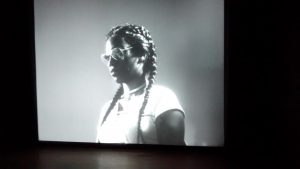 So, starting at the top, floors 4 and 5 of the Gallery have been given over to displays of work from the four short-listed finalists of this year’s annual Deutsche Borse Photography Foundation Prize.  Of course, in today’s era of permissive Post-Modernistic Heisenbergian uncertainty, the definition as to what constitutes a photographic display has become decidedly fuzzified and evolved far away from the simple standard sequential row of framed photographic pictures that once would have been considered the sensible norm.  Now, instead of that hopelessly old-fashioned stylistic trope, each of the contestants here has created the kind of large, room-sized installation suggestive of the kind of cerebral conceptual construction that would have happily found itself at home, embraced within the more obviously artistic remit designed by those who select entrants for the Tate’s Turner Prize competition. 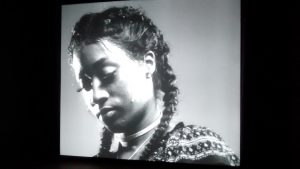 And indeed, Luke Willis Thompson’s flickering, clattering cine-tape-loop projection was originally shown at the Chisenhale Gallery, a space that prides itself on commissioning and promoting the work of the most cutting edge of contemporary art practitioners.  As it is, Thompson’s film is a sort of moving portrait study – both literally and metaphorically – since it focuses on the blank face of a young African-American woman who only occasionally shifts positions to mouth some silent words or raise and lower her doleful gaze.  It’s a mysteriously compelling and enigmatic image that gains weight with the knowledge of its backstory.  As the Gallery guide usefully explains, her partner was one of those poor unfortunates shot dead by the police during the notorious incidents that gave rise last year to the transcontinental Black Lives Matter movement.  The film makes no overt comment on any aspect of this story whatsoever but simply bears painful silent witness to a particularly saddening aspect of contemporary American history. 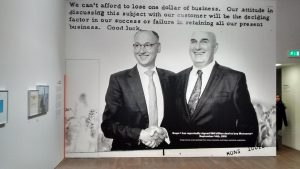 By contrast, Mathieu Asselin’s ferocious attack on Monsanto is a much more obvious, no-holds-barred denunciation of the global biotech corporation.  The full story of the photographer’s investigations into the company’s morally questionable dealings are documented within a very large book that’s available to be read in the Gallery.  With detailed sections on Agent Orange, Genetically Modified Crops and other scary tales, it makes for the kind of heavy and depressing document that I think probably only the most dedicated and masochistic of eco-warriors would really wish to read in any of its dreadful detail.  Although, I daresay the corporate legal team at Monsanto must also have had a pretty thorough read through.  As for Asselin’s actual photographic display – a selection of some of the illustrations from the book’s that have been blown up to poster size and spread round the Gallery walls – in themselves, they struck me as being not particularly interesting, revelatory or dramatic but, presumably, they come to life when surrounded by the text to which they relate and set within the context for which they were originally conceived. 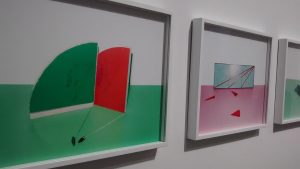 Rafal Milach comes from a similar agit-prop direction with his work that’s also designed to illuminate a particular point, albeit that his target is less focused, being a more generalised critique of, ‘…post-Soviet propaganda in architecture, urban projects and objects through a consideration of sociotechnical systems of governmental control and ideological manipulations of belief and consciousness’.  Although I assume that this particularly mind-numbing phrase, picked out from the relevant section of the Gallery guide, is meant to be an attempt to parody that peculiarly orotund rhetorical style familiar from the dialectical diatribes of the apparatchiks who used to amke the former communist autocracies run so very smoothly.  In which case, the dull, rather haphazard collection of items in Milach’s display – the obscure architectonic drawings by pupils of a chess school; the matching pair of small pyramidal sculptures; the painting of a multi-coloured wall; plus the other films and video clips – are all meant to be as deliberately stylistically moribund as the target of their derision, which they are both simultaneously referencing and mocking. 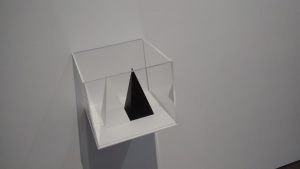 Finally, Batia Suter’s display is another selection of images culled from a hefty book, enlarged to jumbo-size and then pasted directly onto the Gallery walls as posters.  The images are an eclectic bunch of organics scraps – twigs and fronds, corals, cabbages and cacti – spiked with the addition of occasional inorganic additives – an old vacuum cleaner, a circuit board, some twists of paper.  All have their origins in scientific magazines and textbooks and so tend to share a similar unadorned documentary format which, I suppose, is the reason they group so well together and make such a pleasing montage.  But is there any deeper meaning to be discerned from the assembly or is it just an utterly random collection of stuff, of the kind that kids used to scissor out or papers and glue onto the pages of scrapbooks, in those innocent days before instagram and pinterest made the cutting and pasting all so boringly electronic?  Well, the Gallery guide is not a lot of help, suggesting that Suter creates, ‘…visual dialogues and associations (that) demonstrate how much of our understanding of the world, its history, cultures and geography are affected by their context’.  A magnificently meaningless phrase that snatches this year’s Anglo Berman prize for worthless verbosity away from the copywriter charged with explaining the rationale behind All Too Human, the Tate Britain exhibition I was blogging off last week (and to which, incidentally, the Guardian’s Jonathan Jones gave a breathless 5-star review).* 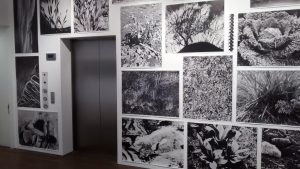 I suppose, with the exception of Suter’s creative collagistic source-book compendium, the rest of the show here is all a bit serious, earnest and slightly heavy-going and, indeed, not untypical of a form of photo-documentary didacticism designed to make its audience not just look closely but think deeply.  Which, perhaps, is no bad thing. 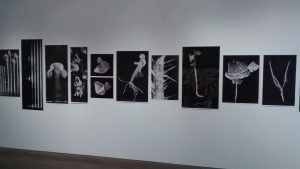 Elsewhere in the Gallery is a rather intriguing selection of items from the personal archival collection of Sebastien Lifshitz designed to show examples of the deep-seated cultural phenomenon known as cross-dressing.  Now, speaking as someone whose conservative tastes in clothing limit shopping expeditions to the most beige-vanilla confines of the M&S smart-but-casual range, and whose most radical sartorial statements these days occur when inadvertently exiting the house wearing a pair of mismatched socks, everything here looks very exotic and strange.  There’s a whole range of men in frocks and women in tweeds – a great mixture that varies from the dandified exhibitionism of some to the provocative transgressions of others while not excluding examples of both the quasi-erotic and deliberately comic.  I suppose it’s a celebration of the diversity of human nature, and the fact that there were noticeably many more people viewing this selection than looking at any of the works of the other Deutsche Borse contestants, suggests that it’s a subject about which many people are deeply curious, whether they would care to admit to the fact or not. 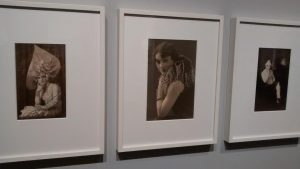 All of which I had thought would lead me rather neatly on to the Barbican and its own current photography show, Another Kind of Life, which takes a look at the works of photographers who have chosen to document the lifestyles of various countercultural and otherwise minority groupings.  But, sadly, I seem to have run out of space and so will ends things abruptly here…but then add a brief addenda. 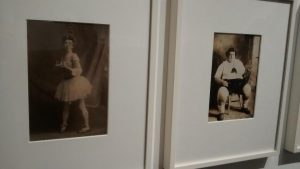 *for, at the risk of appearing to enter the unnecessarily indulgent and unhealthily incestuous territory whereby reviewers review the reviews of other reviewers, I feel obliged to make at least a quick comment on JJ’s piece that appeared in the Guardian and which, at first regard, seemed so totally at odds with the D-minus designation that I awarded the same Tate Britain exhibition in my blog last week.  I think the main difference between our divergent perspectives results from the fact that Jones’ spent his time praising the qualities of some of the individual artworks on display while completely avoiding any discussion of the merits or otherwise of the exhibition as a whole.  So, yes, a number of very good works had indeed been included in the show but, in my view, exhibitions are meant to be considerably more than just the sum of their disparate parts.  A story should be told, an argument made, a theory laid open to debate or at least some kind of logically consistent thread should otherwise be introduced to satisfactorily bind all the bits together and thereby transmute a simple collection of paintings into something larger and more worthy of deserving the title of exhibition.  And since, to my mind, this simply did not happen at the Tate Britain display, then the show cannot be seen as anything other than a rather sad failure 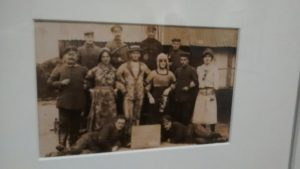 One response to “Decidedly Fuzzified”