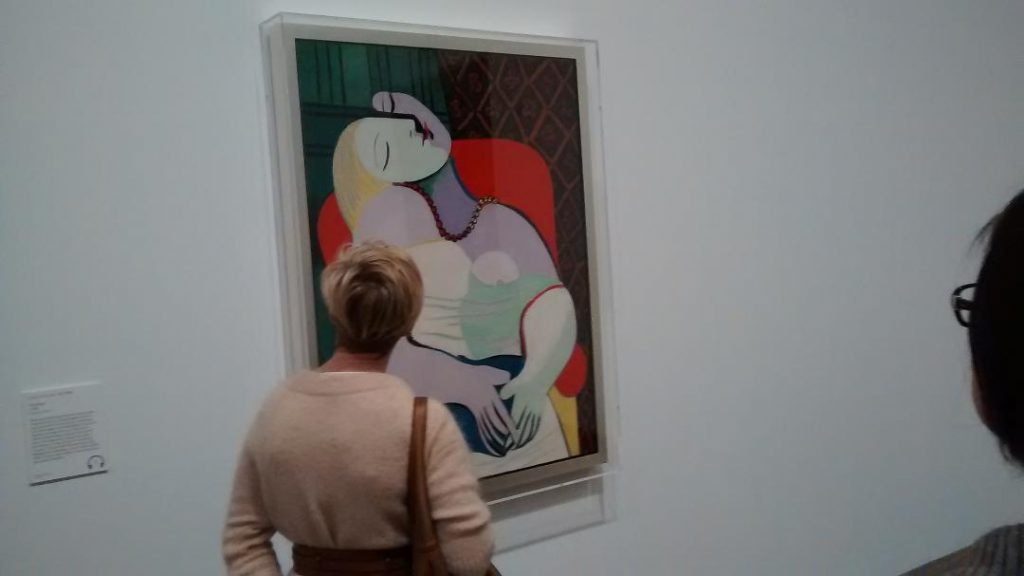 Head down to Southwark tube station en route to Tate Modern and today the fifteen-or-so minute walk is actually quite a pleasant perambulation. And, at the risk of lapsing into what I believe might be called an example of the pathetically fallacious, it feels to me like the recent angry icy blasts from the east have been becalmed by the influx of a much milder gusty breeze from the south.  It’s a switch in wind direction from Siberian to Iberian sources that presages a change, however temporary and stuttering, from the depressing gloom of winter to the brighter light of spring and, as such, is liable to imbue even the grumpiest of jaded old blogger hacks with at least the hint of a bat squeak of optimistic anticipation.  Although, having said that, I can’t deny feeling a certain sense of niggling trepidation wrinkling its way round my cerebral synapses as I get closer to the mighty cultural megalith that squats so resplendently here on the south bank of the Thames.  So, what’s the reason for embarking on this perilous journey of ambivalent expectation?  Well, I’ve come to take a look at Picasso 1932, a review of the art produced by the dapper, if diminutive, Spanish genius during the course of one important year which, on the face of it at least, sounds like it could have the potential to be a really interesting, exciting blockbuster of a show.  But then the Tate, at least as represented by some of the more recent exhibitions that have filled the rooms of its smaller incarnation perched across and down the river at Millbank, has been wont to disappoint and I’m wondering whether this latest offering I’m about to encounter could be just another irritating shambles of a show. 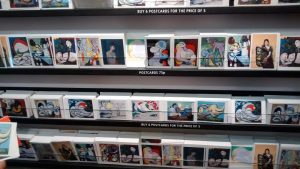 Fears about the professional seriousness and competency of those who are in charge of running the Tate’s great imperial project are certainly not allayed when, on entering the gallery, I find the ground floor is still carpeted and filled up with children’s swings and children swinging on them.  It’s part of the dreadful, banal, disastrously dumbed-down, Turbine Hall commission installation set up by the Superflex art collective, which seems to be deliberately designed to encourage children to enter the building and then give them precisely the wrong impression as to both what an art gallery is meant to be about and, dare one say it, the agreed social norms as to how one is then meant to behave when situated within its walls.  After all, galleries are meant to be institutions of education and enlightenment, places for looking and learning and quiet contemplation.  And, surely, if kids want to exercise and expend energy and make accompanying expressions of exuberant ululation there are already green parks, theme parks, arcades and recreation centres for them to do so rather than…oh well…grinding my teeth I try to ignore the screeching sounds of kids enjoying themselves, mutter an unseasonal bah humbug and carry on up the escalator to join the thankfully shortish queue to get into the Picasso show…breath bated and fingers crossed. 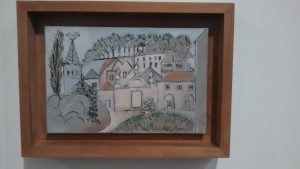 And…deo gratias, it’s such a pleasant relief to be able to report that this is, without question, a rather wonderful, very interesting and attractive exhibition and a real pleasure to walk through.  There are plenty of just plain joyously impressivel things to look at; everything is hung with consistent good care; there is practically no padding out with duff second or third division stuff; and it’s got a sensible enough thread of a theme of an idea to hold it all together in the form of a truly coherent ensemble display. 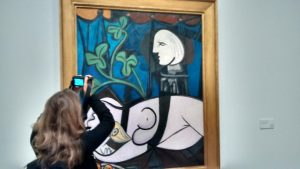 At which point it’s tempting to stop writing and just recommend that anyone at all interested in Picasso, in particular, or the art of the 20th century, in general, should simply go along to the Tate (ignore the swings and kids) and take a slow wander through these dozen exhibition rooms, giving their eyes a treat and once again marveling at the extraordinary output of the most consistently imaginative, inventive, not to mention, prolific artist of his, or any other, age.  But, having gone to the trouble of taking a bunch of photographs of the show I think my snaps will probably look better if I insert between them a few interstitial paragraphs of periphrastic persiflage.  Starting off with a slight query as to why the curators chose 1932 as the year on which they would focus all their chronological consideration. 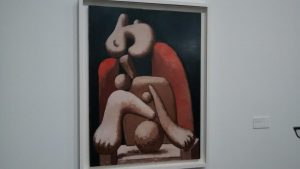 Ok, so it was the year in which Picasso celebrated his fiftieth birthday which, I suppose, for most of us is one that tends to be marked by some kind of special notability (personally, I seem to recall climbing up the famous Sydney Harbour Bridge when I reached that particularly symbolical milestone on my own autobiographical journey through life’s mysterious pathways).  And it was also the year in which Picasso was honoured by being given his first full retrospective exhibition, not that he seems to have been particularly bothered by the tribute (apparently he went off to see a film instead of attending the private view) and he was anyway already famous, fashionable and earning pots of money from a rapidly growing clientele of buyers. 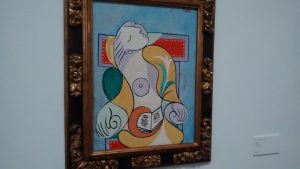 Nevertheless, it wasn’t exactly any very specific kind of an annus mirabilis and nor did it mark any great turning point in his own personal situation or artistic career.  After the early years of feverish experimentation that had given rise to the Blue and Pink Periods, followed by his input in the Cubist revolution, that managed to overturn the previous perspectival consensus that had directed all artistic forms for the previous five hundred years, Picasso had entertained both Neo-Classsical and Surrealistic phases.  But, as far as I can tell, by 1932 he had already settled on a sort of personal mode of working that incorporated mix and match aspects of all these previous stylings.  Not much good for cataloguing landscapes or relating any kind of complicated histories or narratives, this method of Cubist-lite caricaturing was essentially a personal shorthand hybridisation of styles for the investigation and representation of shapes, forms and volumes, ideally adaptable for presentations of simple still-lifes but even better suited for the kind of allegorical portraiture that fills up most of the rooms in this display, and can be read as a continuous kind of autobiographical chronicle. 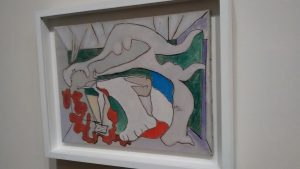 Colours generally fall within the lighter, brighter end of the spectrum, while shapes tend to be softer and more rounded, albeit with occasional angular fissures.  And it’s hard not to get the impression that Picasso is rather reveling in the fruits of his success, and not just the financial bonuses that allowed him to buy a chateau, employ servants and be chauffeured around in the kind of luxury limousine that some might have thought would normally be denied by the constraints of the communistic politics that he claimed to support.  For, as well as happily succumbing to the glorious temptations of more material pleasures, the notoriously testosteronically macho male was also enjoying what I suppose might be called the honeymoon period of his relationship with his latest artistic muse.  Sometime in the late 1920s, Picasso had switched affections away from his first wife, Olga Khokhlova, and begun a relationship with the teenage Marie-Therese Walter, and it’s her youthful profile that recurs time and again throughout the show in both painted and sculptural formats, the latter being most familiar through the curiously unflattering assemblage of bulbous globular masses. 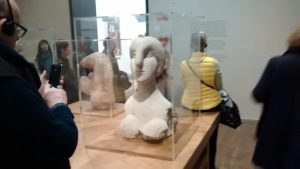 Somewhat ironically, the best room in the show is the one that specifically relates to the retrospective mentioned above, since it includes a range of works outside, or rather before, the specific year of ’32.  As such, it provides a small but exquisite opportunity to revisit examples of work that show Picasso’s mastery of formal painterly techniques while also revealing just how far he was able to stretch and fragment the figurative tradition under the banner of his Cubist experimentalism.  That the beautifully sympathetic full-length portrait of Olga in an Armchair, 1917 (seen not so long ago in the show at the National Portrait Gallery), the intensely vibrant Three Dancers 1925 (one of the true masterpieces from the Tate’s permanent collection) and the Woman in the Garden 1929 metal sculpture, are all so stylistically different and yet were all the work of the same masterful hand is really quite incredible.  Almost as incredible as the fact that Picasso was such an indefatigable talent that he could apparently retire to his studio and effortlessly paint one large impressive portrait after another, three or four a week, often on sequential days – look at the paintings here and then look at the labels, which list the dates, and marvel at this sheer feat of unceasing creative prodigality. 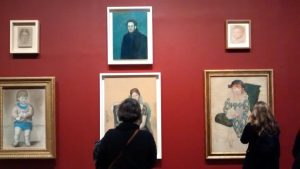 So, hat’s off to good old Pablo for being such a continuing source of wonderment and well done Tate for staging such an enjoyable show – the kind that really does help restore one’s faith in the value of going along to art galleries and looking at the stuff on the walls.  Exiting the show it really does almost feel like spring has finally sprung and I’m seriously tempted to go off and find a celebratory swing to swing on or maybe even search for another bridge to climb. 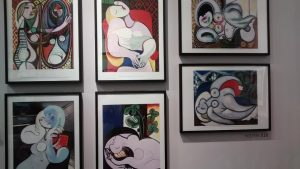