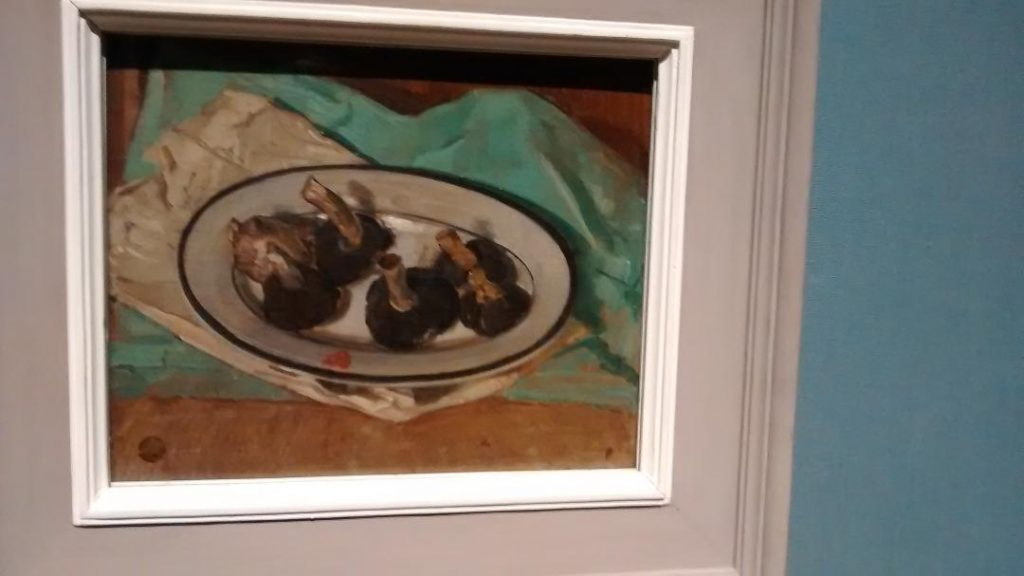 Following on from the conclusion to last week’s discursive, unresolved blog…this time, when I return to the National Gallery, I take the precaution of donning a pair of blinkers and thus manage to avoid being sidetracked by any of the many delightful distractions that fill the multiplicity of rooms containing the Gallery’s own glorious permanent collection.  The point being that I’ve come along here today specifically to take a look at the temporary Tacita Dean display entitled Still Life.  Which, as previously mentioned, is part of a trilogy of shows featuring the artist, with the others being:  Portrait at the National Portrait Gallery and Landscape at the Royal Academy (opening later in May).  Presumably modesty prevented Dean from going for the full, full house and pitching a show about History Painting to Tate Britain but, even so, she’s covered three of the essential genres of the historical canon of Western civilisational artistic development. 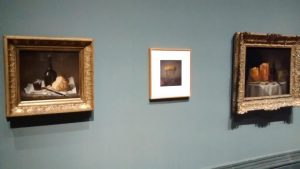 Of course, in the traditional formal hierarchy of such matters it’s still still life that’s the humblest and least prestigious of all the standard artistic formats which, I suppose one could argue, makes it perhaps the logical place to make a start when examining Dean’s tripartite retrospective.  Although, on a slightly more practical, mercenary level, especially for those not overly familiar with Dean’s work – of whom I have to include myself – the show here at the National is a sort of small but useful, amuse bouche taster introduction to the artist’s world.  And it also comes with the added attraction of being free entry, as opposed to the £12 full price ticket for each of the other two tribute shows.  On the downside, however, this means that there are, in fact, only five small artworks by Dean herself in the display here.  As for the rest of the show, that’s bulked out by a selection of paintings by other artists that Dean has chosen to collate and curate together into what I (initially) assume to be a sort of didactic installation ensemble. 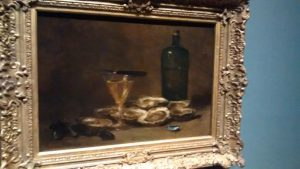 So, what’s it all about?  Well, considering the title of the show, the first thing to note is that there are, rather curiously, only a few examples of what would generally be classified as typical examples of the still life genre, and none of them by Dean herself.  So, in chronological order (not that they’re hung that way), there’s a rather pretty platter of mushrooms by William Nicholson from the 1920s; William Henry Hunt’s delicate watercolour of a pair of apples and a snail shell along with Phillipe Rousseau’s offering of a snack of semi-shucked oysters from the mid-1800s; a couple of pleasant 18th century French bread, wine and bottle combos; and finally, best of all, a simple rose paired with a cup of water standing on a pewter plate by Zuberan from 1630.  As for the rest of the couple of dozen or so paintings that are on display, there’s a small menagerie of animal studies including a sparrowhawk, a dead owl, and a pair of dead hares, one by Sickert, the other by John Craxton; some Surrealish landscapes courtesy of Paul Nash and Albert Reuss; a birdcage by Gwen John; the discorporated head of St John the Baptist’s resting on a presentational plate from some unknown artist working in the 16th century and…well, without listing everything here, hopefully I’ve managed to reasonably enough convey the impression that it’s all just a little bit of a fairly randomised mishmash of a collection of oddities and soddities that has no very obvious or precise connecting thread. 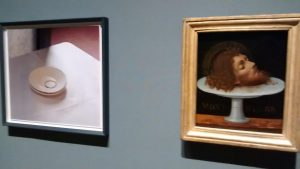 Now, clearly, Dean could have just gone round the National and done a supermarket sweep, assembling together a sort of best-ever, greatest hits selection from the permanent collection.  And by picking works by, say, Chardin, Goya, Manet and Cezanne, with supplementaries from the Tate, by Morandi, Picasso and Wesselmann, it would have been easy enough to then make a generalised case for the potential nobility of the humble genre – showing just how wonderful the still life style can be of itself – and also how it’s evolved over the years to match each century’s various changing artistic concerns and styles.  But, instead of that, Dean seems to have deliberately gone out of her way to select mainly secondary works, half of which come from a range of provincial UK museums and galleries in Cambridge, Sheffield, York, Cardiff, Chichester and so on.  Presumably a point is being made – but what is it?  An introductory wall panel claims that Dean is, ‘…disrupting the usual conventions of still life…(and) focuses on qualitites like displacement, dislocation and estrangement’.  But I’m not sure that that helps very much. 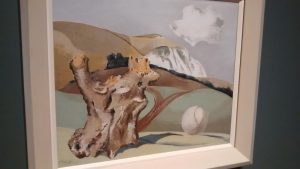 As for her own works, aside from the post card of a painting of some flints in a landscape by John Crome, which she seems to have appropriated by sticking it in its own special plastic see-through box, the rest are all short films.  So, there’s 3 minutes and 33 seconds of a small twittering bird on a wire in California and somewhat longer (around ten minutes), lingering sequential close-up shots taken from a variety of angles showing a detailed examination of a stewed pear (in colour) and some chunks of flints (in black and white).  As a result of zooming in so awkwardly close to her subject matter and then choosing to shoot from a series of precisely chosen off-beam angles, the images are all a bit unclear and hard to read – some of the pear pics look like the surface of scumbly planet; and the lumps of rock could just as easily be mistaken for mountains or megaliths as bits of bone or folds of flesh. 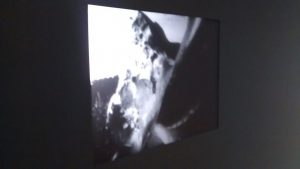 Frankly, I have to confess that I’m now starting to get that same sinking sensation of intellectual inadequacy that occurs whenever my eyes happen to go down and across a column containing one of the Guardian’s Azed crosswords with their extra-strength, cruelly cryptic clues.  I’m sure there’s something tenable going on in the Dean show but I can’t help feeling all a bit confused and exasperated and ready to give up trying to figure out how exactly everything does get to fit together.  Until the penny finally drops and it occurs to me that what Dean is trying to offer up is not so much a direct narrative description or explanation of the still life story but rather a sort of a generalised overview insight into her own particular working methods.  And that the odd collection of other artists’ work are not the illustrative exemplars of any specific grand theoretical exposition but simply a rather grandiose attempt to produce the equivalent of a personalised scrapbook or visual sourcebook of the kind she might dip into or draw upon for the inspiration needed to help generate ideas that could then be incorporated into items of her own creative output.  And, further, that she’s less interested in analysing any specific aspect of pears or flints or finches or whatever but rather wishes to examine what are the essential ingredients that constitute a generic still life and whether the form still has any continued relevance in contemporary artistic practice.  At which point it’s probably worth pausing briefly to give a short paragraph over to considering how artists’ use of the still life genre has changed with time. 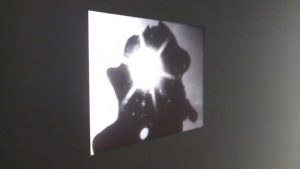 Personally, I think that artists originally painted collections of household objects – fruit, glassware, tablecloths etc – as a way of showing off their technical mastery in using oil paint to render convincing representations of different materials, textures and surfaces.  This later evolved into a more purely decorative, modernistic formalist approach that demonstrated there was an inherent abstract beauty that could be found lying within simple arrangements of simple shapes and colours.  Subsequently the form got tested to destruction with the experiments of early Cubism which resulted in a collapse of the previous perspectival logic that had been holding everything together for the past few centuries.  Following on from this battering, the idea of the still life went into a sort of hibernation period while various forms of direct Abstractionism flourished, albeit that there was a sort of brief jokey comeback when Pop Art produced updated versions of commercialistic construction.  But, of course, that happy figurative respite has now been all but crushed into extinction with the advent of the various forms of Conceptualism that have now become the new salonistic establishment house styles. 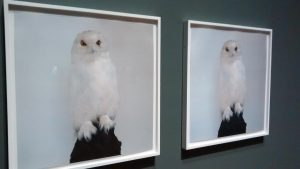 So, why is Dean trying to buck the trend and revivify the still life format?  Well, I’m not really sure but if I have, indeed, correctly determined her game plan, while I think it’s fair to say that she’s making valiant and determined efforts it seems questionable as to whether all the effort is actually worth it.  And whatever the motive behind Dean’s attempt to bring the still life format back to life, her strategy, for all its surface experimentalism – offering series of multiple shots of the same scene; and using film instead of paint as a medium, thereby introducing the additional chronological element – seems to me to be rooted in a warm soapy fug of nostalgia.  And that instead of pushing the genre forward to find contemporary relevance, she’s too hindered by a desire to look backwards for her inspiration.  It’s a thought compounded by Dean’s choice of subject matter that seems to echo that of artists like Piper, Ayrton, Craxton (who, indeed, appears in the show) and the rest of the so-called Neo-Romantics who made their fleeting appearance on the British art scene in the immediate post-war years before being blasted aside by the more urgent urban realism of the 1960s counter-cultural blowback. 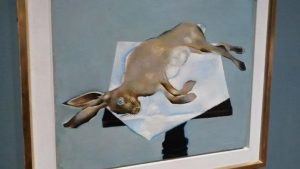 I kind of think that if there really is still life to be found in the still life genre then I’m not convinced that it’s going to come from Dean’s fuzzy sentimental experiments, pretty though they may be.  But whether a younger generation will bother trying to refashion it from somewhere within the binary virtual reality of cyberspace is perhaps open to even greater doubt. 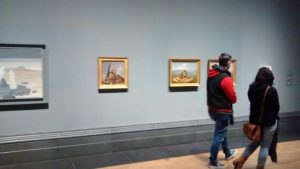