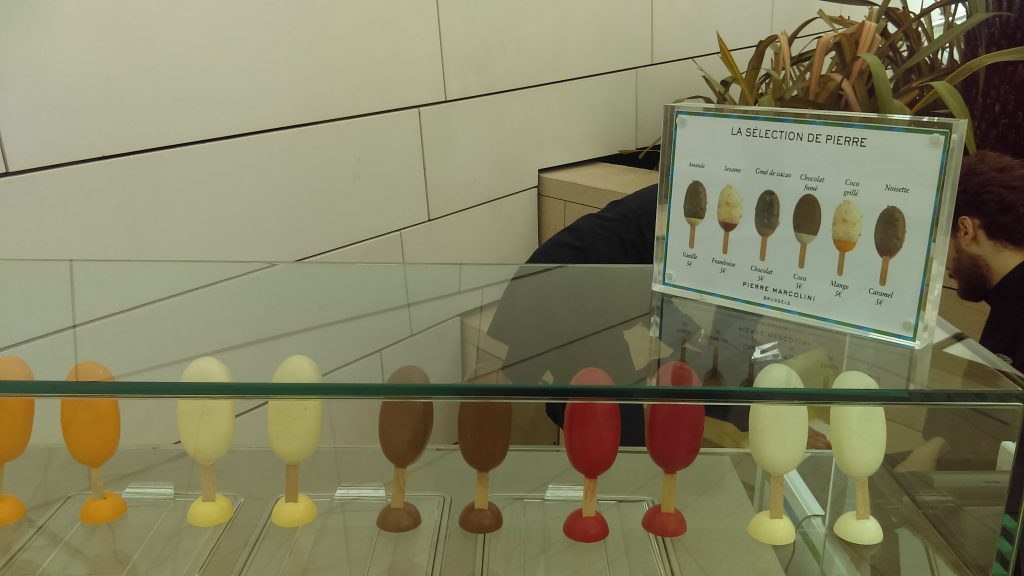 Following on from the last blog, I’m still en Paris but before getting out and flaneuring round the boulevards, rues and avenues, and then calling in at some of the café, musees and galleries, I thought I should just have a quick moan about how expensive it is to practice this cultural cruising here in France.  Unlike back in good old Blighty, where there’s free entry to see the permanent collections at all the main arty tourist haunts – British Museum, Victoria & Albert, National Gallery, National Portrait Gallery, Tates Modern & Britain – and then reduced entry for oldies when there are special temporary shows, over here there’s always an entry fee and never any discounts for seniors.  And while it’s definitely worth buying a Museum Pass, because it allows you to jump the queues at a lot of the venues I visited, my 4-day version cost me 62 euros and that didn’t even cover everywhere on the itinerary.  In fact, with all the places included, I donated exactly 100 euros (about £75) to the French economy which, as a tourist, I’m perfectly – well, moderately – happy to do, but I can’t help thinking there should be some kind of reciprocal arrangement whereby my French counterpart visiting London’s sites should make a similar sized contribution. 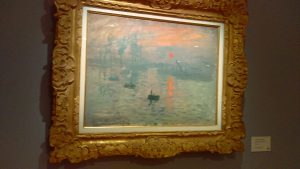 Oh well, maybe this can be sorted out during the current EC withdrawal negotiations.  I’m sure Barmier and Junkier are reasonable men and would be open to some kind of suggestion like that.  In the meantime, today I’m taking my rapidly diminishing stash of euros in a westerly direction towards the Bois de Boulogne and, more specifically, to the Musee Marmottan Monet.  As its name suggests, the Musee boasts a large collection of works by the eponymous Claude, including the very sketchy Impression, Sunrise which, rather half-heartedly, delineates a foggy vision of the port of Le Havre with an unconvincing, unlikely looking round orange sun punching its way through the blue morning mist and twinkling its reflection on to the ripples of the muddy green waters below.  Frankly it’s not one of Monet’s better works and it really does look like he gave up painting half way through and couldn’t be bothered to finish the thing off but, nevertheless, it’s achieved immortal historical fame and favour for apparently giving rise to the naming of the whole Impressionist movement that subsequently followed and kick-started the concept of the new Modernist art for the new Modernist age.  Elsewhere there are plenty more, better Monets to admire, especially the later Giverny garden effusions and the famous lily pond extravaganzas.  All of these works are housed in the special bright white extension galleries that have been carefully excavated under the main, rather charming, grand old house above. 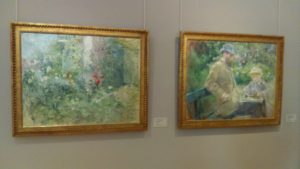 Here the collection is a bit less focused, with an assortment of very much less familiar French art from the previous century set amongst various displays of the appropriate furniture and decorative trappings of the times, which is a polite way of my saying it’s all a bit dusty and boring for my tastes.  The one other brief interlude of interest in the permanent collection comes from the special small grouping of paintings by Berthe Morisot, an artists whose work seems very much less frequently shown than others amongst the Impressionist fraternity.  I’m not sure whether this may be due to her having been less prolific in her output than the rest of the boys or maybe some kind of sexist discrimination by curators and gallerists that worked against her.  Alternatively, and at the risk of raising the hackles of some of my feminist friends, who I know don’t agree with my critical evaluation of her painterly talents, I don’t think she shared the same level of technical facility as the rest of the gang and struggled a bit to pull her compositions together.  A comparison of one of Morisot’s country scenes with a haystack centerpiece, for instance, compares very badly against the many Monet equivalents, with her construction resembling more of a quivering blancmange than a shimmering house of straw.  But chacun a son gout, comme on dit ici, and I can just about see how some might prefer her lighter looser less fussy brushstrokes. 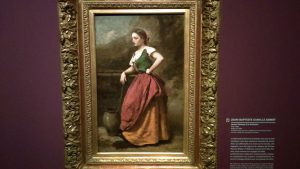 Finally, there’s also a temporary display here of portrait works by Camille Corot, an artist perhaps better known for his rather dour landscapes that, I confess, I’ve always thought of as somewhat worthy but dull.  Perhaps unsurprisingly, he uses the same

characteristic range of dark, crepuscular tones to create similar quiet, understated, unflashy compositional vignettes when he applies his skills to painting people rather than bosky woodlands or dark bucolic havens.  There are a few standouts – the mundane but pretty Young Girl at the Well and the much more intriguing, very untypical Bacchante and the Panther – but otherwise I’m not convinced that grouping quite so many similar works together (and this really is quite a comprehensive piece of curation) is such a good idea. 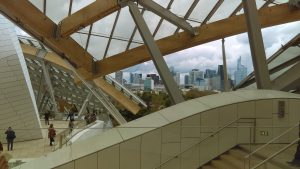 And so for something entirely different it’s on to the Foundation Louis Vuitton, an utterly absurdly extravagant flamboyant insane iconic car crash of a building from Frank Gehry, who somehow managed to convert a scrimmage of scribbled lines and a collection of crumpled balls of paper into a massive monster of interlinked bisecting, trisecting and unsecting panels and planes of glass and wood.  It really is an extraordinarily daft exercise in egomaniacal expressionism of the most explosive excessive nonsensical kind.  And, as such, utterly suited both to the decadent Neo-Salonic artworld times in which we live and the concomitant nugatory, otiose empty art of much of the recent past few decades.  Despite the enormous gallery structure, there are comparatively few actual examples of art to fill it all, with much of it deserving little more than the briefest of cursory glances.  Murakami’s irritating tacky cartoonistic installation probably represents the grim nadir and while the handful of Richters, Giacomettis and Ellsworth Kelly’s might look ok in other circumstances, here they are overwhelmed by the inappropriateness of either their architectural or artistic surrounds.  On the plus side, there’s a nice little Boltanski video of bells twinkling bells in the Atacama desert; a large Olafur Eliasson installation of mirrors that allows one to simultaneously view oneself from a dozen different angles; a rather neat waterfall feature and…er…that’s about it.  My final, symbolic memory of the Gehry Godzilla comes after having climbed and clambered my way to the very summit of this very confusing structure.  Here I’m confronted by a wonderful view of the City surrounds and a beautiful bijou ice cream stall with La Selection de Pierre on offer – half a dozen small mini-Magnum style treats that cost a mere 5 euros each.  At which point I make my excuses, leave and go back to the hotel to recuperate. 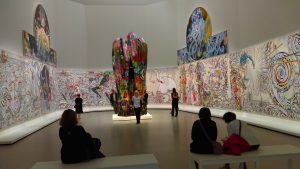 Revivified once again, I’m up and out to start my last day in the city of love or, for me, Louvre.  I was quite looking forward to returning to this citadel of Gallic cultural chauvinism to take a quiet stroll down its unending corridors of picturesque displays which I remember from my last visit as being devoid of other wanderers and peaceful enough to allow for a suitably contemplative study of the artworks held therein.  This time, however, the reality is somewhat different and either my memory has started to play ghastly tricks on me; or maybe last time I went the fire alarm had gone off and no one told me; or maybe Macron has made pals with the Chinese dictator, Xi-who-must-be-obeyed, who has consequently instructed all his citizens to go West and make a Parisian pilgrimage.  At any rate the entire enormous building is now absolutely chock full of streams of noisy hommes et femmes all creating an extraordinary background level of gormless chattering noise that contributes to making the visit a cross between an updated purgatorial trip to one of Hieronymus Bosch’s dystopian visions of hell and the kind of zombie apocalypse envisioned by the specialist auteur director George A Romero.  Suffice to say, it’s ugly. 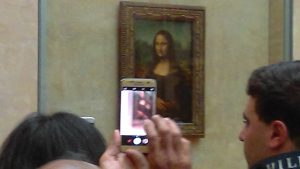 The one solitary space in the whole building that seems to be devoid of humanity’s whirls is the small section given over to what one assumes to be a deliberately miserable display of British art that features little more than a pair of Gainsboroughs, the most pitiful unfinished Constable and a very wishy-washy Turner of the kind that probably gave Monet the idea for starting Impressionism.  Fighting my way out through the other various galleries I think I did manage a glimpse of some rather pleasant Goyas and a glance at some finely finished Ingres but the rest is subsumed within a vague blur of undefined cacophonous imagery as I’m swept along by the peristaltic wave of pullulating humanity all determined to find Lisa, crack the Da Vinci code and so unlock the secret of why everyone feels such an irresistible urge to take a selfie in front of the world’s most famous and mysterious rictus. 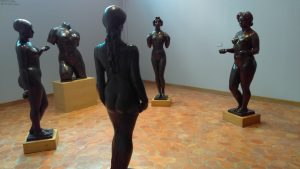 Escaping from that awful madding crowd I manage to make my final call of the holiday tour by reaching the oasis of calm that is the Musee Maillol.  One floor of the building is devoted to a reasonably pleasant display of the works of Aristide Maillol that confirms the sculptor to have been fairly consistent in his career in producing works celebrating the pulchritudinous posture, well-rounded features and occasionally slightly portly protuberances of a succession of charming young ladies.  News to me was that he alsoto made similar renderings on canvas by producing an equally competent succession of painted versions of the same succession of desirable femmes deshabilles.  I’m not sure that anyone seeing these displays would need to revise their ratings of the artist above his current fairly fixed position in the minor leagues of individual Modernist curiosities, but I suppose he gets points for consistency if not for great imaginative flair.  Also on show here is a more fulsome tribute retrospective to Tsuguharu Foujita, another equally interesting art history footnote who seems to have toyed with various figurative styles in a career defined by his attempts to infuse European Modernism with a touch of Japonistic stylings.  On reflection, I think I might have been better off making my way to the Musee Rodin but that will have to wait for another vacance and another visit as it’s now time to Eurostart again and cross-channel Sinatra…for while…It’s very nice to go travelling with just a toothbrush and comb, it’s oh so nice to come home. 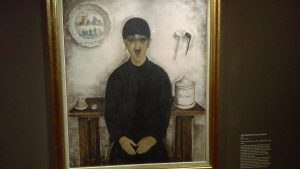 One response to “Barmier and Junkier”