Pierre Bonnard’s White Tablecloth (1925) from his current Tate Modern retrospective; Richard Serra’s ‘T’ With Two (1986) minimalist metal sculpture consisting of a pair of carefully balanced hot-rolled steel plates, that was recently shown at the Simon Lee Gallery; and a still from Amie Siegel’s video Genealogies (2016) from her installation Backstory at the Thomas Dane Gallery, which shows Brigitte Bardot and Michel Piccoli in a scene from Jean-Luc Godard’s film Le Mepris (1963).  So, what do these three very different expressions of Modernistic art all have in common?  Well, illustrative mobile photos taken at the exhibitions wherein this disparate trio of works have recently been on display represent the shots that have gained the most likes of all the 250 images so far posted out on unvarnished_official, the official Instagram account linked officially to the official Unvarnished blog, which was set up for me by a talented teenage techie enthusiast sometime during the summer of last year. 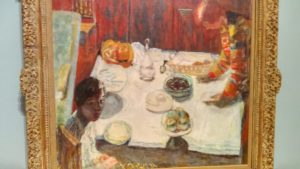 The promotional plan behind the introduction of this instant Instagram connection being based on the idea that a seductive parade of purely pictorial presentations might gradually tempt an intrigued audience to wish to investigate contextual background reviews relating to the snaps, and so allow for the potential discovery of the entertainingly instructional delights of literate discourse available through close readings of the felicitously phrased critical analyses that are so much the hallmark of the weekly Berman blog pontifications.  Although, admittedly, I also thought it might help me become one of those famously fabulous influencer people who get invited to swanky parties and introduced to interesting reality-show celebrities, before being showered with goody bags and bribed to endorse important fast fashion food fads and other exciting junk products for the enrichment of the devious and the detriment of the gullible.  But, since, so far, I seem to have managed to attract far, far fewer followers than that other famous Birman – Karl Lagerfeld’s cat Choupette – this promotional rebranding strategy doesn’t seem to be working out exactly as hoped for, just yet. 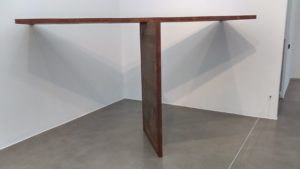 Anyway, leaving aside all that tawdry stuff and getting back to the important Instagramatical actualities of the moment, I have to say that while I like all three of the trio of pictorial favourites referenced above, and think them definitely photogenial winners, I’m sure that I’ve released lots of other shots that were prettier, more interesting or with, what I had assumed to be, more clickbaitable allure.  But then I’m not entirely convinced that having a ranking system that relies on random members of the public deciding to click onto a heart emoticon is really the very best way to measure the value of an artwork. 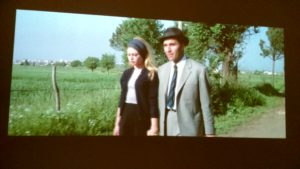 Then again, I realise that I maybe in a minority in thinking that way, especially among the growing demographic of young people who, as with every previous generation, are understandably eager to shove aside their predecessors and refashion the world and its aesthetics to be more in keeping with their own particular styles and sensibilities.  I certainly feel that I may have become beached on the wrong side of history when it comes to trying to compute the impact, interpret the meaning or predict the future direction of all the peculiar manifestations of social media socialising that have arisen and evolved so very quickly during the course of installing and continually upgrading our new globally connected post-millennial world of wonders.  And, that being the case, I feel obliged to pay heed to the advice given by good old Uncle Bob half a century ago to a previous generation when their times were changin’.  And so ‘…don’t criticise what you can’t understand…’ seems to be a very reasonable motto to bear in mind when any old-timer like myself considers writing about matters concerning the new internet structures of communicative interconnectivity.

All of which is a bit of a meandering free-thought associating run-up prelude to my visit to an exhibition at the Photographers’ Gallery intended to try to unpick some of the threads of the webwide informational technology phenomenon, and which is entitled, All I Know is What’s On The Internet.  And I confess that I was more than a little surprised to find that this catchy phrase was not the ironic title of one of those clever books written by smart West Coast tech theorists to explain why the world is destined to be doomed to a dysfunctional dystopian future of Terminator termination.  No, apparently it’s a throwaway line from Donald Trump before he got to be President.  And, sure enough, there’s a YouTube clip showing him speaking these very words in a TV interview, although it’s been edited down way too short to provide any real context as to what he was talking about.  And even after a bit of a Google search I’m still not entirely sure what the story is behind the quote, although it seems to involve a retweeted video of a faked restaging of an incident that may, or may not, have taken place at one of Trump’s famous rabble-rousing rallies during which a protester who could have been a terrorist supporter attempted to storm the stage…or not.  The details seem to be very unclear and I’m not sure if it’s all just fake news, fake-fake news or something else entirely?  As with so many other Post-Modern stories that emerge from the cloud cover above, it seems that it’s just no longer very easy to verify the truth of such narratives, let alone try to untangle the subsequent spinning, unmediate the meanings and make any sensible assessment of the facts – before someone decides to change them all for another set.

Anyway, as for the actual content of the exhibition at the Gallery, a dozen or so artists and designers have been assembled together to present a series of mini-displays that try to draw attention to various aspects of the state of photography in what is described as, ‘an age of image excess and invisible labour’.  Perhaps unsurprisingly, the tone tends to be universally critical but it’s also very much framed in a way that suggests there’s a sort of generalised conspiracy of controlling corporate malevolence behind all this internet stuff which is ripe both for exposure and the kind of small scale subversive undermining that appeals to the more socially concerned members of the freewheeling investigatory hacker community that seem to lurk about in the liminal shadows of the cybersphere miasma.  All of which may well be true, although I’m not sure that our brave underdog whistleblowers here come up with any major new revelations or threats that will not have already been considered by anyone who is not utterly sold on the beguiling visions of Zuckerbergian utopianism.

Having said that, it’s still quite amusing to see pictures showing various bloopers, whether from the pages of Google Books (where the hands of scanning operators have been accidently left in the picture) or Street Views (that manage to include images of the driver operators fumbling around with the mirrors on their all-seeing spy cars).  As for the point in seeking out and publicising these images of corporate cock-ups, I suppose the aim is to draw attention to the fallibility of the enemy tech giants as a useful reminder that behind every great glossy artificial intelligence-led advance there’s almost certainly still a band of poorly paid precariat workers.  And maybe it also helps to raise the morale of the other guerilla warriors out there who want to punch holes in the system.

But if Andrew Norman Wilson and Emilio Vavarella, who collated the examples referred to above, represent the merry prankster cadre of the activist underground then Stephanie Kneissl and Max Lackner perhaps offer a slightly more subtle and sophisticated approach to throwing grit into the cogs of the 5G future via the creation of their quirky Heath Robinson machines.  These absurd analogue devices, with their fans, motors and sensors, are designed to interact with tablet devices with the sole purpose of trying to confuse Twitter and Instagram algorithms by reacting randomly to their feeds – declining their helpful predictive suggestions and refusing to heart-like what they’ve been told they should be heart-liking.  A similar spirit of outraged activism also seems to inspire IOCOSE who document here the results of their project organising matching sets of Amazon workers both to propagate and then denounce the same nonsensical conspiracy theory that’s been dreamed up by the Collective for the purpose of…well, I’m not exactly sure although it certainly has a kind of ironic anarchistic symmetry presumably deigned to help it go viral.

Other items on show take a more or less jokey approach to raging against Facebook, Amazon and the other digital behemoths that are gradually controlling more and more aspects of our lives.  But things get a whole lot more serious and perhaps potentially dangerous with the work from Winnie Soon and Miao Ying, both of whom set out to grab the Chinese dragon by the tail and give it a couple of yanks by highlighting how Chairman Xi and his squadrons of loyal followers like to censor various topics, of which perhaps the most famous is that relating to Tiananmen Square, although there are plenty of others to choose from.  And indeed that sad benighted country seems to be becoming a test bed for a kind of surveillance and control society more intrusive and all-encompassing than even the wildest dreams of the biggest of Orwellian Big Brothers.  I kind of think there will be scope for a lot more, lot larger exhibitions exploring all these kinds of themes in the increasingly near future when AI and the so called internet of things really does start its exponential take off and computer capitalism begins to evolve into digital dictatorships – always assuming that the those in charge will allow such things to happen.