Today, in a rare twist of the current wintry meteorological trends, the heavens have shed the grim gray shroud that has recently been providing that depressing sense of seasonally affective disordering and replaced it instead with a shimmering cyanean skyscape through which now shines a fiercely penetrating orb of sheer golden brightliness.  And as for the atmospherics accompanying this bracingly refreshing luminescence, well, they couldn’t be better – the air is cold but crisp which I reckon makes conditions feel just about right for a general wander around the comforting streets and avenues that flow south of Oxford Circus tube station, which happens to be my starting off point for today’s cultural meander.

And first stop is at Annely Juda Fine Art which has given both of its gallery spaces over to an exhibition of sculptures by Tadashi Kawamata. Although, I’m not entirely sure that sculptures is quite the right term for what’s on display here today. Suffice to say that the artist seems to have been given a lorry load of light wooden crates of the sort that might normally contain a couple of kilos of cucumbers, kumquats or some such other succulent comestible and then, having smashed these receptacles into different splintery gradations, attempted to reassemble the smithereens into an assortment of bird boxes, landscape reliefs and various other more abstractified formulations.  While it would be churlish not to admire the dexterity of the artist in affecting this imaginative display of metamorphosistic re-engineering, the end results are all a bit bland and kitschy and remind me of the sort of twiddly twee creations that Blue Peter‘s Tony Hart used to come up with when given a packet of lentils, half a dozen old buttons and a lump of plasticine. Clever-ish but not exactly the finest of fine art – maybe the kind of Christmas gift a distant aunt would rightly be pleased to receive from a nerdy nephew but not really the kind of thing you’d want to hang above your own mantelpiece.

So, a bit of a disappointing start from a usually very reliable gallery. But, thankfully, things start to improve when I get to the Paraffin gallery where it seems that the famous septuagenarian stroller, Hamish Fulton, is still not yet quite ready to hang up his artistic walking boots. Instead, the eternal trudge goes on, with the results appearing here in a small but fascinating display of items documenting a selection of some of the artistic hikes he’s completed over the past twenty or so years.  As well as trips around the UK and America, a lot of the other journeys seem to involve circling mountains in Asia, an exercise that not only rewards the circumnavigator with views of sublime wonderment but, as far as I understand it, can also clock up a whole bunch of spiritual brownie points that will help the perambulating pilgrim along the final path towards that ultimate Nirvanical destination where we all eventually meet up.

I suppose the real art lies within the actual act of walking but the distilled essence, preserved by way of photographs and poetical texts – some appearing as prints with others graffitied straight onto the gallery walls – still retain some of the sort of alluring mystical shamanic potency associated with incantatory spell casting.  At least, I assume that’s approximately the idea behind this kind of old-fashioned analogical conceptualistic texting.

Continuing my own less strenuous kind of a ramble, I turn a corner and find myself suddenly struck by a blast of full on enlightenment. I seem to have come into perfect alignment with the sun’s positioning above the horizon such that the solar rays are bashing straight into my eyes and racing right down my optic nerves.  Not quite sufficient to cause a full on Damascene conversion of any kind, nevertheless, for a fleeting moment I’m certainly temporarily blinded and befuddled until I manage to turn away and finally find relief by entering into my next port of call, the small but chic Bastian gallery.  And with a spooky sense of cosmic synchronicity, it turns out that the show here is a celebration of the light sculptures of Dan Flavin.

It takes a while for my peepers to readjust from the pounding just received from the naturalised sunlight outside but, slowly, I start to focus on the three relatively small works included in this pretty little show.  And I just think these Minimalistic fluorescent light assemblages, with their softly subtle photonic emissions, are really rather stylishly attractive and a quite treat for anyone blessed with the kind of sufficiently well-tuned sensibility that I’m fortunate enough to have acquired through years of gallery-going excursions.  By which I mean that only viewers who are as super-sophisticated as what I am will be able to fully appreciate these delicately demanding works.  Or, I suppose the alternative version would be that maybe only people as easily gulled as I am are going to look at a couple of light tubes stuck up against a gallery wall and think that what they’re seeing is art.

Of course, at the end of the day, it doesn’t really matter one way or the other whether agreement can be reached on what constitutes art or not and if the thought of an arrangement of light furnishings is considered to fall outside the consumer’s category, well, there’s always going to be something else on offer just around the corner. Which today happens today to be at Hamiltons where the current display is a selection of very sharp and glossy photographs by Mario Testino. This suite of recent works references the artist’s interests in aspects of Japanese culture focussing both on displays of native flowers and also on the traditional technique of Irezumi tattooing. As one might imagine, in Japan this particular form of body art involves more than just crudely inking on a couple of hearts or the roughly rendered portrait of some pin-up or pop idol and, indeed, the colourful complex all-over patterning of the bodies that Testino has recorded are really quite brilliantly striking. It’s an effect heightened not just by the stark lighting that he’s used but the fact that the variously staged compositions involve concentrated close-ups of a pair of models who have become very creatively entwined. By contrast, the floral tableaux are much more subtle and delicate and if the thought of celebrating the ornamentations on a couple of muscley young Yakusas is perhaps a bit problematic then it’s probably best to concentrate on the undeniably exquisite arrangements of these oriental botanicals.

And so from the sublime to the ridiculous. At least, that’s what I very much expected my next visit to represent since the Mayor Gallery is staging a show of artworks courtesy of Congo the Chimp. Yes, for anyone who remembers hearing stories about a talented primate who achieved temporary celebrity by staging well-received exhibitions of artworks back in the late 1950s, but thought that the whole thing was just some kind of apocryphal fable – well, it turns out it was actually true and here is the evidence on display for all to see. Of course, when the story first broke it was great for the tabloids of the day, providing not just a series of cute photo opportunities but also support for all the common sense arguments about how the work of then very fashionable abstract artists was just a con trick and that given enough paint and canvas any four-year-old child could produce daubings of similar style and equivalent value.

Now, over the years I’ve occasionally seen the efforts of four-year-old children and, as far as I can recall, while their efforts at figurative renditions can indeed sometimes achieve a rather attractive sense of naïve expression, when it comes to abstraction the works always just end up as an utterly unstructured mess. Doubtless, there are reasons for this that relate to neurological developments in the way the brain gets to understand the world and process what it sees. And it’s pretty clear that while there are going to be similarities between the networks and processing powers of the cerebral structures located in the minds of humans and our near relatives the apes, there are also going to be major differences. Judging by this interesting exhibition, one of these differences is that while untutored infants of a certain age are unable to produce much more than a hodge podge of randomness, chimps can create abstractionist works that show a real appreciation of design. Or maybe that should read that one very special chimp has been able to exhibit a real artistic talent, as I’m not sure that any of Congo‘s colleagues showed any similar abilities or that there have been any other chimpanzees who have subsequently been able to emulate his impressive simian skill set.

And, of course, the fact that there haven’t been any other artists from the animal kingdom, primate or otherwise, does hi perhaps make one wonder whether Congo himself may have received some human help in creating his paintings which really do look very surprisingly well constructed. It’s a thought that’s harder to shake off when one knows that the Svengali promoting the chimpanzee was none other than the famous author and TV naturalist Desmond Morris, a polymathical man who also had a second professional career as a minor Surrealist painter. Either way, I have to say that the exhibition is a really rather lovely display of colourful abstract works that, were one not to know their actual origin, one might easily assume were the work of a very promising natural talent. 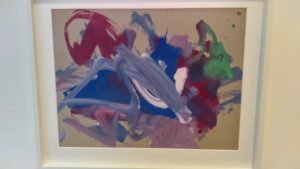 Over at the Cristea Roberts Gallery is another attractive show of abstracts courtesy of the late great Howard Hodgkin.  Looking at the one reproduced below prompts me to wonder whether Congo may have been influenced Hodgkin, or was it vice versa.