Having ended last year’s final blog by exiting the Royal Academy under the steely gaze of Lucian Freud‘s penetrating vision, I thought I’d risk turning round and, just like Orpheus or Edith, take a metaphorical look back and try to hack together a sort of review of the last year’s fifty or so trips into the lands of the artworldish netherworlds. And, incidentally, if you’re wondering who the hell is Edith, well, according to my very cursory wikipedical researches, that euphonious appellation was the Christian name of the famous Mrs Lot (not that she would have actually been a Christian).

So, January started off the year with a good little show of old Pop art assemblages from Rocky Rauschenberg at the Galerie Thaddaeus Ropac and big showing of Bill Viola videos at the Royal Academy, although I’m not sure that padding out the exhibition by sticking in a bunch of Michaelangelo drawings was really such a good idea. By far the best and most enjoyable show of the month, however, was the big full scale retrospective of paintings by Pierre Bonnard at Tate Modern. And one would have to have a very hard heart indeed not to be charmed by these colourful studies of golden syrupy life in a happy French bourgeois idyll where the flowers are always in bright bloom, the table is always laden with luscious temptations and there’s a glorious vision of feminine pulchritude around every corner?

February brought everything down to earth with a crash from the sublime to the ridiculous by way of the Ashmolean Museum‘s displays of Post-Modern sculptural concoctions by Jeff Koons. This was then followed by two grim photographic shows, with the early quirky absurdist documentations of Diane Arbus at the Hayward providing an uncomfortable apreitif for the oh so much darker journalist war stories of Don McCullin at Tate Britain.

Marching on, there was a bit of a disappointing journey out to Cambridge to see a big show of etchings by Whistler that would have been much enhanced by the addition of a few more of his paintings. While there I took another look at the recently renovated Kettle’s Yard Gallery which had crammed some Louise Bourgeois works into one of its two small display spaces. Again, it was hard to avoid some seriously noisy tooth grinding at the architectural insanity of the Gallery’s refurbishment that has added a totally unnecessary cafe and enlarged the shop area all at the cost of reducing the size of the actual exhibition spaces. Aarrghh. A much, much more successful upgrade was achieved at the MK Gallery in Milton Keynes which reopened with some large well apportioned rooms suitable for seriously sized shows, albeit that its opening gambit was a bit of a silly thematic mish-mash that jammed together everything from a wonderful Henry Moore sculpture to a garden lawn mower, and a Richard Hamilton print of the Guggenheim Gallery in New York to a pair of Gertrude Jekyll‘s old gardening boots.

April brought some comedic relief courtesy of the White Cube Gallery and an extensive exhibition of dreadfully incompetent draughtswomanship from the erstwhile Royal Academy‘s Professor of Drawing, Tracey Emin CBE RA. This was followed by a more seriously shambolical assortment of ancient displays of naked exhibitionism put on by the Royal Academy as some kind of thematic investigation of the aesthetical predeliction patrons and artists have had over the years for commissioning and creating renditions of human nudishness. It was a pretty messy mixed up show but at least by attending one of the associated celebratory chat fests that accompanied the show, I was able to renew my acquaintanceship with the ubiquitous panellist Dame Professor Mary Beard DBE FSA FBA, whose own exquisite natural form I was once privileged enough to study and then render in a painterly presentation. Apparently the work now hangs in the loft of Bluestocking Towers slowly decaying away as the incarnate doppelganger remains her unchanging radiant self. Meanwhile, over at Tate Britain there was what I thought was a rather weak Van Gogh show with a dozen really good example of the monoauricular master’s work padded out with many of his more weaker earlier paintings plus a lot of other stuff from other artists, some with only very tenuous connections to the already tenuous theme of the show, which was meant to be about the brief time the artist spent living in London (which, of course, occurred well before he got around to becoming an actual artist himself). A much more impressive exhibition came at the British Museum where the mighty Norwegian miserabilist, Edvard Munch, was given a fulsome retrospective of his powerful print works – Scream included.

May was a bit of a feminist month with large retrospectives of works by Mrs Max Ernst at Tate Modern and Mrs Jackson Pollock over at the Barbican Art Gallery. Ok, I’m only teasing. And while their spouses are both much better known and their creations far more lauded and sell for much higher sums, both the shows by Dorothea Tanning, featuring her Surrealist paintings, and Lee Krasner, with her mixture of abstract artworks, really did cause one to re-evaluate the accepted assessment of their respective standing. I think it’s fair to say that both the women artists have been underrated in the past and fallen somewhat under the shadows of their more famous husbands. Tanning‘s early works may have been a bit derivative but her more mature output had a punchy originality and this show proved that Krasner really does deserve to be included in the role call of the first division of abstractionists of America.

June allowed time for another excursion out of the city and down to the South coast to visit Farleys Farm, former home to the writer and Surrealist painter Roland Penrose and his wife, the model and photographer Lee Miller. Poking around their possessions and rifling through their drawers while going on the guided tour of the house was jolly interesting but ultimately unrewarding as all the good stuff has already been pinched or sold off. Back in town, Zak Ove‘s big grab bag show of art by Black British artists at Somerset House was a bit of a chaotic curation as was the Hayward‘s Kiss My Genders investigation into intersex identities. And while Frank Bowling‘s retrospective at Tate Britain was attractive and interesting in parts, it only really managed to confirm the artist’s place in the lower rankings of British abstractionism.

July’s big show at Tate Modern was the would-be blockbuster than turned out to be a bit of a dampish squib. At least, that’s what I thought, although I think Olafur Eliasson‘s collection of illusionistic party tricks involving fake fog, strobe lights, a kaleidoscopic tunnel and various other kid’s party entertainments, proved popular with families in search of an educational diversion. A more sensible and successful show was the comprehensive Cindy Sherman retrospective at the National Portrait Gallery which really did show what an amazingly inventive artist she is and how cleverly she has deconstructed and reconstructed the idea of portraiture by dressing herself up and then modelling and remodelling herself over the course of a long and very cleverly curated career.

August was again the time to exit the city, first to Modern Art Oxford for an impressive series of portrait studies by Claudette Johnson and then later in the month for a return visit to the MK Gallery for the Paula Rego show which confirmed her status as the country’s leading figurative artist. There was also time later in the month to take a walk around the annual Sculpture in the City art trail. And while perhaps none of the twenty or so artworks was individually all that special, the orienteering jaunt to find them was fun especially since this part of town has such an extraordinary juxtapositions of old and new architecture to beguile the tourist.

September was a yet another month of travel, first to Bath’s Holburne Museum to see some Vuillards in a show that was somewhat smaller than anticipated but nevertheless had a few really exquisite intimiste items of interest. Then it was up North, first to see the Cezanne prints at Manchester’s Whitworth Art Gallery, which were a bit of a disappointment and merely confirmed just what a struggle the poor old Post-Impressionist had when it came to trying to draw things properly. Much more entertaining was the full on retrospective of zippy designs by Keith Haring at Tate Liverpool that finally convinced me that the man really was a proper artist of some quality and not just a avearge graffiti artist who’d just been hip-hop hyped.

October brought to Tate Britain an utterly comprehensive collection of small intricately printed works of words and pictures by that most idiosyncratic of British eccentrics, William Blake. There was far too much to take in in one go and even after repeated viewings I’m still not sure that I really have much understanding of what the man was about, but the intensity and single-minded dedication of his efforts are undoubtedly impressive and much of his imagery quite unforgettable. The other big retrospective was over at the Royal Academy where Antony Gormley filled all the main galleries with replicants of himself in a variety of sizes and media, plus some site specific works that were perhaps less successful.

November provided another couple of interesting retrospectives with Nam June Paik‘s jokey videos and robot contraptions at Tate Modern and Bridget Riley‘s Op Art illusionistic abstracts filling the Hayward. While over at the National Gallery the collection of Gauguin portraits showed just what a wonderful colourist the man was, even if the questions over his personal life, and in particular the relationships he shared with his models, is becoming increasingly problematic.

December ended the year with the Lucien Freud self-portrait show at the Royal Academy that, as I said at the time, was one of the best exhibitions of the year although, having just compiled this annual review, I think it’s not unreasonable to say that there were actually quite a few good shows on throughout the year that were definitely worth making the effort to go an see. Hopefully the New Year will similarly provide some 20/20 visions worth taking a look at. 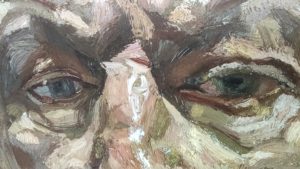