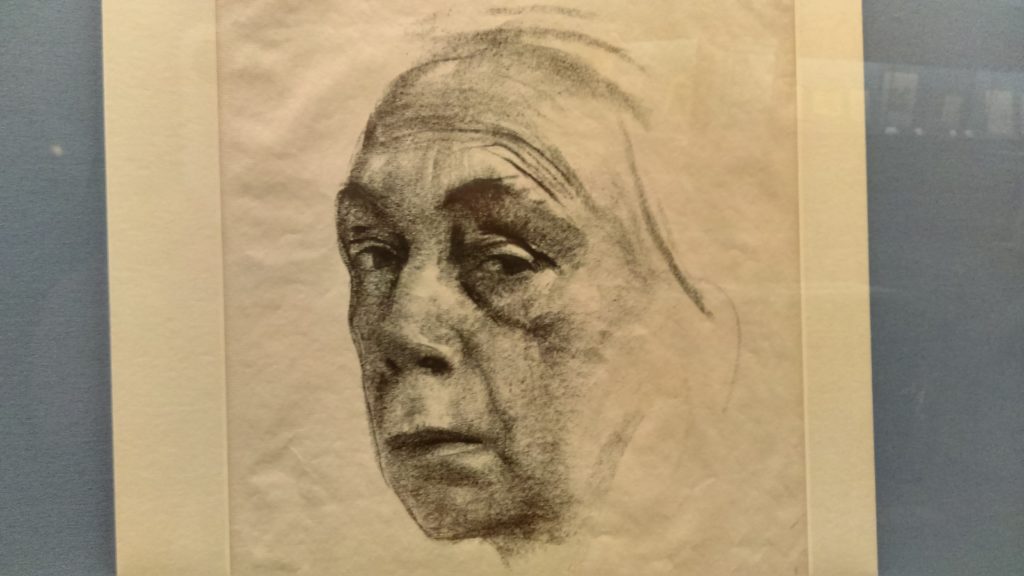 Getting on the tube heading off to Tottenham Court Road, I pick up one of those free Metro papers that are scattered around the capital every morning in order to try to tempt commuters to forgo their daily digital routines of swiping through video clips, updating profiles and deciphering emojistic pictograms, and switch instead to receiving informational news updates in a comforting old-fashioned analogue format. Today one of the lead stories is about the lack of diversity among nominees for the upcoming Bafta awards with, yet again, no female directors on the list and no black candidates appearing in any of the main acting categories. Doubtless the story is also being reported online, generating memes and hashtag responses expressing the outrage of a millennial generation appalled at the shameful lack of inclusivity engineered by an older power clique of privileged white males who are utterly oblivious to the important changing nature of progressive societal trends. Being a smallishly ‘L’ liberal sort of a chap I decide, having read the article, to offer my virtue signalling support by making a loud tut-tut sound that should notify anyone in my immediate vicinity that, never mind Boris or Brexit, on this particular issue all right-minded people are harmoniously aligned in their condemnation of out-dated discriminatory attitudes, whether they apply to matters of gender or colour, race or creed, etc etc and etc. At which point I am about to congratulate myself for my bold stance on this important matter of contemporary concern when I catch sight of the distorted reflection hovering about in the window glass opposite me. And while I’m sure no-one would position me at the extreme gammon end of the meaty spectrum of male complexional ratings, I am undoubtedly in the caucasian quadrant and my thinning gray hair denotes that I am also exactly within that age range where the default position is very likely to exhibit attitudes of unthinking dinosarological inappropriateness. 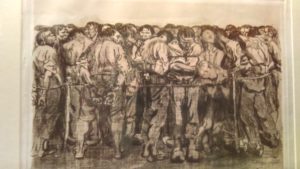 At which point, I start to wonder whether I might conceivably be just another old humbug, happy to join in the simplistic condemnation of others when an audit of my own actions might well reveal my true nature as being equally shoddy. It’s a thought that prompts me to consider how balanced and inclusive is my own blogological record. Unfortunately, the various analytical tools that come in the WordPress processing package that provides the templates for my weekly written effusions do not extend to offering a rating of my sensitivity towards such discriminatory matters. It does, however, occur to me that I might gain some kind of a broad insight into my personal biases by referring to last week’s blog offering that was itself a rough generalised summary of the whole of the previous year’s output. 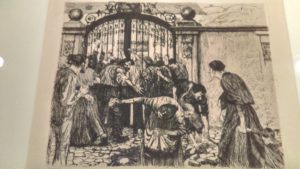 Having now taken the opportunity of reviewing that review I’m relatively relieved to be able to report that of the thirty or so artists name-checked in that article, about a third were women and ten percent black which, while obviously falling a little way short of precisely reflecting the country’s current demographic spread, is at least a very great deal closer to that achieved by those dreadful Bafta professionals. And, in mitigation, I am, of course, somewhat constrained in my blogographical content by having to gather it together from the shows and exhibitions that are offered up for inspection by the artworld’s own very rarefied and totally unrepresentational assortment of galerists and curators. In short, I think I can just about breathe a sigh of relief and assure myself that I’m probably on the side of the angels when it comes to this important aspect of cultural awareness. 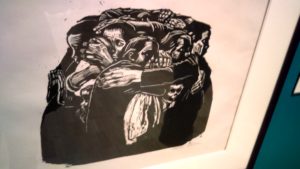 All of which leads me to today’s ramble which starts when I stride up the stone steps and pass through the imposing columns at the entrance to the British Museum which, thankfully, appears to be really quite empty today. Evidently, the swarms of tourists, who usually make a visit to this secular temple of cultural treats such a grim and unpleasantly crushed and crowded experience, have all stayed at home or else departed for warmer climes. Which means that my walk to the elevator that takes me to the fifth floor Print Room is easily accomplished and, further, that the gallery full of the glass cases that contain the current displays is similarly happily quiet and uncluttered. I have to admit that I’ve been looking forward to the show here as it’s dedicated to an examination of the works of one of the most highly regarded and rightfully revered female artists of the last century: Kathe Kollwitz. Some years ago when I visited Berlin I called in at the Kollwitz Museum and, while the place was a bit of a hassle to find and the building itself looked like it would benefit from some maintenance and repair work, the comprehensive selection of prints and sculptures were incredibly powerful and provided a truly moving experience. 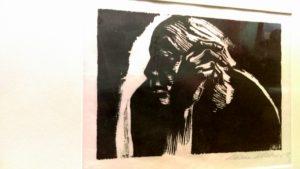 Well, sometimes one is best left savouring one’s memories for, although this current show is quite full and does contain some strong works, I have to report that it didn’t provide anything like the emotional hit that I was expecting. I’m not sure why that was the case – perhaps I just wasn’t in the mood – but, notwithstanding my own reactions, I’d certainly recommend a visit to anyone else to take a look, especially as the show is free entry. For those unfamiliar with Kollwitz‘s oeuvre – and I’m not sure that there are many (or even any) examples of her work in public galleries in this country – I think it’s fair to say that she was mainly an Expressionist and occasionally a Symbolist, and was chiefly concerned with documenting the darker aspects of history and humanity. And, of course, working in the first half of the last century meant that the mix of political struggles and the consequential wars that followed provided an abundance of serious subject matter which she treated with an impressive degree of subtlety and sensitivity, whether trying to capture the desperate deprivations of poverty or the anguish of mothers mourning for their lost children. From the detailed descriptions in her precision etchings or the bolder blacker markings of her brutal unflinching woodcuts, Kollwitz shows an impressive talent for design and composition that only makes me feel more unsure as to why I didn’t feel as moved as I perhaps thought that I should have done. I can only assume that my sensitivities have somehow been jaded by succumbing to an overindulgence in the opportunities provided by the recent sybaritic season of excess. 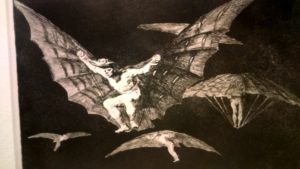 Elsewhere in the Print Room, there are two other broadly thematic shows – Pushing Paper is a bit of a random hodge-podge of drawing from 1970 to now, while Fifty Years of the Harold Wright Scholarship is a bit of a random hodge-podge of prints from Renaissance to Modernist times. There are quite a few bright sixpences to be found if one has the inclination to examine the contents of these otherwise slightly stodgy puddings but, despite my earlier expressions of support for diversity and other inclusive good intention, the names I mentally noted down were, with the exception of Bridget Riley, universally male and pale but by no means stale. So, to highlight just a few – there’s a great early line drawings by Hockney; one of AR Penck‘s chunky pictograms; an odd Grayson Perry collage; a terrifically capricious piece of craziness from Goya (see above); a lovely little da Vinci sketch of a child holding a cat; and a small but pretty Gainsborough landscape (see below). After which I stride determinedly back to the distaff side of the artworld’s gender divide ,courtesy of a visit to Tate Modern where there is a full scale retrospective of works by Dora Maar who, the gallery guide advises, is now ‘remembered mainly for her Surrealist photographs’. Which is sort of true-ish although it’s perhaps even truer to suggest that she is even more mainly remembered for having been one of the most important of the muses and mistresses of that creative genius of Modernistic expression, Senor Pablo Picasso. But before getting side-tracked by the misogynistic maestro who, in fact, only finally manages to barge his way into the exhibition in room six, there are quite a few of Maar‘s diverting snaps to examine. And I think it’s fair to say that she was a definitely a reasonably competent photographer who was happy to alternate between producing straight commercial work and experimenting with what might be thought of as more arty endeavours. 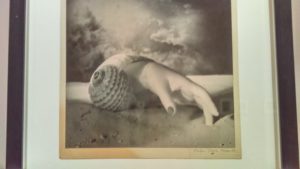 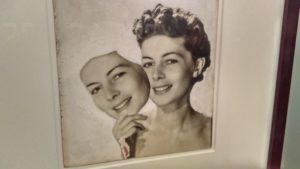 There are undoubtedly a few memorable photographic images in the exhibition but I’m not sure that giving her the full nine-room retrospective does her any great favours since it only emphasises the limitations of her abilities and the brevity of her active career. And even to fill the space requires an awful lot of padding, mainly by way of the inclusion of dozens of her insubstantial late landscape and abstract paintings. While there’s clearly a case for the Bafta boffos to reconsider their outdated attitudes to inclusion, I wonder whether some public galleries seem to be struggling perhaps just a little a bit too hard to make up for past imbalances 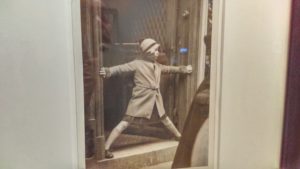