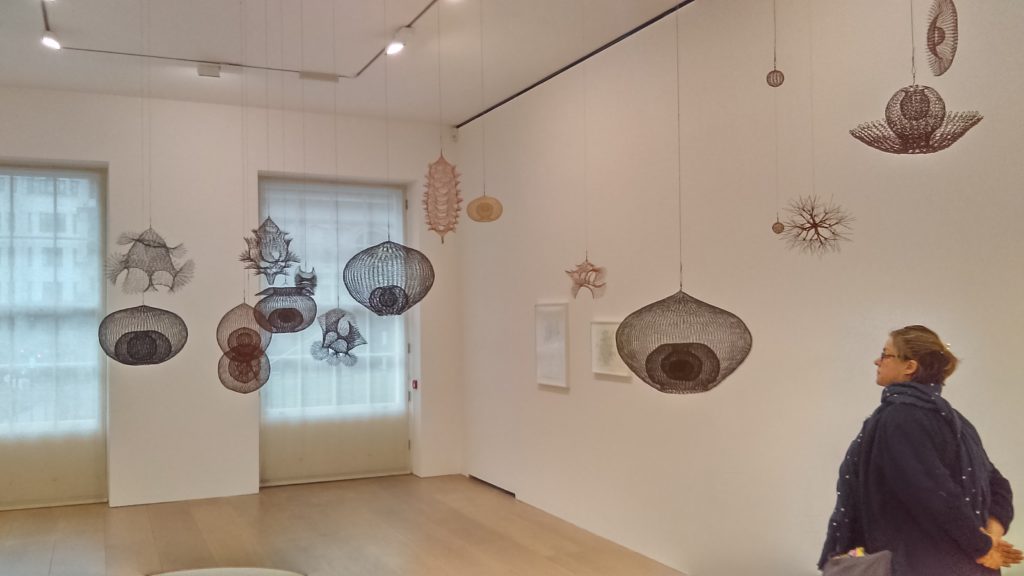 In the Review section of last week’s Observer Sunday paper – along with all the usual bland reports from the in-house critics, plus the mini-interviews with semi-celebrities that I’ve never heard of and the sudoku puzzles that I can never quite be bothered to finish off – there was a whole great cut-out-and-keep supplement devoted to alerting the readership to the best of the forthcoming cultural attractions that will be appearing in the course of the new year that has just begun its inevitable annual odyssey. Now, while I do speed-read my way through various reviews of books that I’m never going to read, plays that I’m never going to see and TV shows that I can’t receive as I don’t pay the relevant subscription fees, scrutinising previews of all these eminently missable diversions and entertainments does seem especially pointless. However, when it came to Laura Cumming‘s column on the visual arts and her article headed ‘Exhibitions to look out for’, well, despite finding her usual weekly writing a bit dull, being neither particularly insightful nor constructed with any great felicitous phrasing, I decided to give it a glance. After all, at the very least, I thought it would give me a paragraph of information that might be of interest to my own dear readers and, while it might be considered to be a bit of a lazy journalistic effort on my part, by repeating just some of the factual detail and avoiding any echo of her actual frothy commentary, I would manage to avoid committing any potential plagaristic activity. 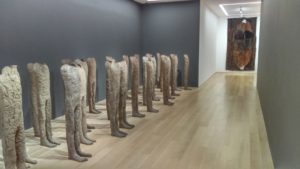 So, it seems that there are potentially quite a few really rather good shows on the way featuring some of the biggest of the big names including Raphael, Titian and Artemisia Gentileschi at the National Gallery; Cezanne and Picasso at the Royal Academy and Warhol at Tate Modern. What else? Well, to quote Cumming directly, there are also, ‘…much-anticipated retrospectives of the artists Angelica Kauffman (RA), Magdalena Abakanowicz (Tate Modern), Zanele Muholi (Tate Modern) and Haegue Yang (Tate St Ives)’. At which point, I had to have a chuckle to myself at the sheer silly, smug,virtue-signalling, right-on nonsensicality of using the phrase ‘much-anticipated’ when referencing artists so minor and obscure that practically no-one will have ever heard of them. Ok, so most people will probably be familiar with the name, if not over-familar with the work, of Angelica Kauffman and, since I include myself in that category, I’d definitely be interested to see a proper showing of her paintings to see if she has indeed been unfairly neglected in the past. But as for the other three, I can only say that I certainly wasn’t much anticipating them before but am now as I’m intrigued by this curious collusion by which the Tate‘s newish director selects obscure artists for promotion and is eagerly cheered on by her media support. What does it all mean and what does it portend for the future? 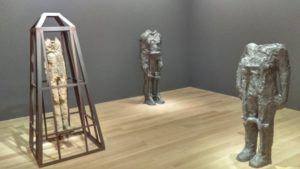 All of which, by completely curious coincidence, provides the serendipitous introduction to the first commercial gallery show which I visit at the start of this exciting new decade. And slipping into the recently smartly refurbished Marlborough gallery, smiling at the invigilators sitting at their foyer desk, I pick up the informational leaflets to see whose work is being offered up for display and – would you Adam and Eve it? – the name I see before me seems starangely familiar being no lesser person than that obscure yet much-anticipated artist Magdalena Abakanowicz! Which prompts me to casually inquire of the man behind the desk whether this is the same Magdalena Abakanowicz who is to soon to be making an appearance at Tate Modern. And, indeed, it is. The affirmation being accompanied by a discreet nod and smile suggesting that I’ve been identifies as being someone who’s in the know. At which point I’m tempted to perform the equivalent of a masonic handshake by saying how much I’m anticipating the show. But the name Unvarnished wasn’t chosen randomly. It’s meant to stand for truthfulness and the expression of honest opinions unfettered by considerations of any desire for swapping favours or forming mutual back-scratching alliances or desire to ingratiate a way into the cliquey artworld confederacy. 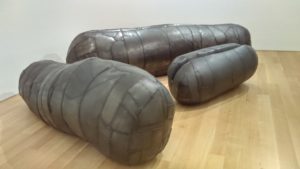 As such I think I can only say that. having dutifully patrolled around the gallery, I thought the show of Abakanowicz‘s sculptures were reasonably competent, not totally without merit, mildly diverting, quite pleasant, ok-ish, not bad, unspectacular, unexceptional. In short, had I been expecting a great revelatory experience or the inauguration into a new world of previously unseen wonderment, I think I would have been quite disappointed. And I can’t say the experience has made me any more anticipatory about seeing further works by the artist. The photographs I’ve inserted in the gaps between the last three introductory paragraphs above are taken from the current exhibition and, I think, give a pretty reasonable representation of its content – a phalanx of headless bodies constructed of burlap and resin; more of the same cast in metal; a few rough fabric wall hangings; and some hefty stainless steel pods. I suppose the works remind me a bit of the semi-Surrealistic feministy style of Louise Bourgeois, although the accompanying gallery leaflet suggests a more overt political origin with Abakanowicz producing symbolic attacks against the state forces of fascism and authoritarianism under which she struggled for most of her career working in Poland before the Iron Curtain finally fell in 1989. Although, having said that, the leaflet also quotes the great Antony Gormley as saying of Abakanowicz‘s work that, ‘Survival and existential questions overtake style’. Which sounds to me like the kind of back-handed compliment that makes me wonder just how much he’s actually looking forward to the Tate show? 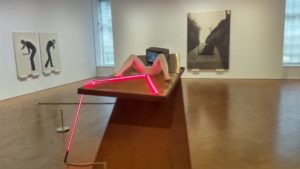 It’s a thought I’m left pondering as I walk round the corner to the Galerie Thaddaeus Ropac which has gone to the trouble of reinstalling the multi-media work originally created by Valie Export for Austrian pavilion of the 1980 Venice Biennale. And I suppose the work resonates quite well with some of the themes of the previous show in that there’s a kind of an underlying feminist conceptualist thread which I feel is more directed towards an audience of which I am not a part and about which I don’t feel very confidently qualified to offer much comment. The main central sculpture is well-described in the gallery leaflet as consisting of, ‘a large rusted steel bed from which a pair of detached female legs rise, a looped video recording of a Catholic mass transubstantiation playing from a television monitor at the bed’s head, with a stream of red neon running from between the severed legs’. All of which I take to be the expression of some kind of antagonistical position towards the question of the vexed relationship between the church and the females members of its congregation and women at large. I think maybe forty years ago the work would have been considered a good deal more daring, shocking and insulting than it does today. Indeed, such have been the enormous societal changes over the past few decades in attitudes towards both the roles and rights of women and the respect to which the church is entitled – the growth of the former being inversely matched by the shrinkage of the latter – that this particular work now seems somewhat clunky, its historical interest definitely now outweighing any intrinsic artistic merit. 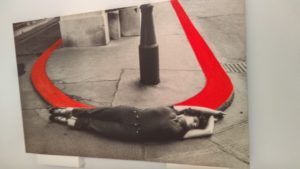 Accompanying selections of some of Export‘s other photographic works showing her in performance mode – sprawled out on the pavement; recumbent before the absurd carved characters ornamenting a fantastical baroque fountain; or stood in a shopping mall with a great lump of rock strapped to her lower torso – are definitely a bit less obviously dated and a bit more inherently intriguing. They certainly bring back memories of those early exciting Conceptualist days when sincere young artists put down their paints and brushes, departed the studio and went out on to the city streets to baffle, surprise and outrage the passers by with their strange antics. 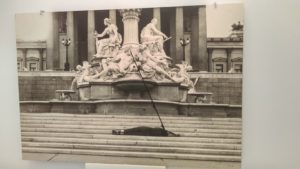 And for those interested in such kinds of expressions of non-retinal artistic intervention, especially the subsection devoted to concerns of feminist experiences and theorising, there’s a whole bunch more of that kind of thing to look at at the nearby Richard Saltoun gallery where Maternality fills the space. A list of some of the titles of works – Second Trimester, Pussy Power, Pummel my Nipple, Who’s still holding the baby? – give a general sense of the concerns of the artists whose works have been gathered together and whose numbers include such well-respected names as Helen Chadwick, Judy Chicago (see below) and Jo Spence. 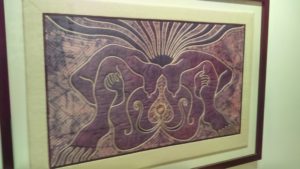 For those seeking respite from the heavyweight seriousness of all that kind of political art, the David Zwirner gallery has a large display of the delicate drawings and complicated wire sculptures of Ruth Asawa. The mixture of precision line copies of flowers from the natural world balanced against 3-D versions of more generalised biomorphic forms hung in groups from the ceiling makes the walk around the display spaces a rather delightful and enchanting experience. 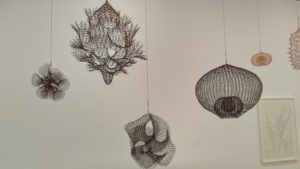 Finally, after so much black and white photography, printwork and drawing I get to my first show of the new decade that rejoices in the opportunities afforded by moving into colour. And this comes courtesy of a show of paintings by Maria Helena Vieira da Silva at the Waddington Custot gallery. Again, it’s the work of a woman artist of whom I’d not previously been familiar but one who will now linger in the memory as painter of some interest. Working at the same time as the more famous post-War American Abstractionists, da Silva was situated in Paris where she produced her much more intimately scaled paintings. And what they lack in the brash raw bravado of the giant-sized explosions of colour that typified the work being made in the New World, they make up for in the more delicately detailed and sensitive arrangements of small shapes and tones that merge into collations of Cubistic quasi architectonic…apologies, I realise I’m starting to drift into the kind of auto-pilot arty waffle used to fill space when it’s better just to stick in another photo, which I will now so do. 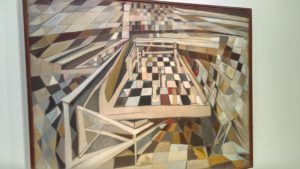 Which, at last, brings me to the Pace gallery and the work of today’s token male artist – Leo Villareal. And it’s a spectacular ending to the day with comets, shooting stars, super nova explosions and the infinite black depth of interstellar space, all recreated through moving pixilated dots of light blinking about as they move across the biggest flat-screens that you’ve ever seen. The effect of all this tricky digital technology and smart stuff programming is certainly flashily impressive and I have to say it kept me looking as the monochromatic fireworks flared, flamed flashed and crashed. All jolly good fun but I couldn’t quite suppress that terrible nagging feeling that maybe what I was gawping at was maybe, in fact, just the most extraordinary crass display of glittery kitsch triviality. 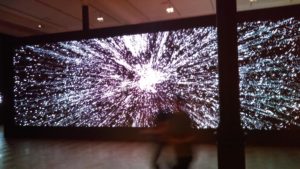