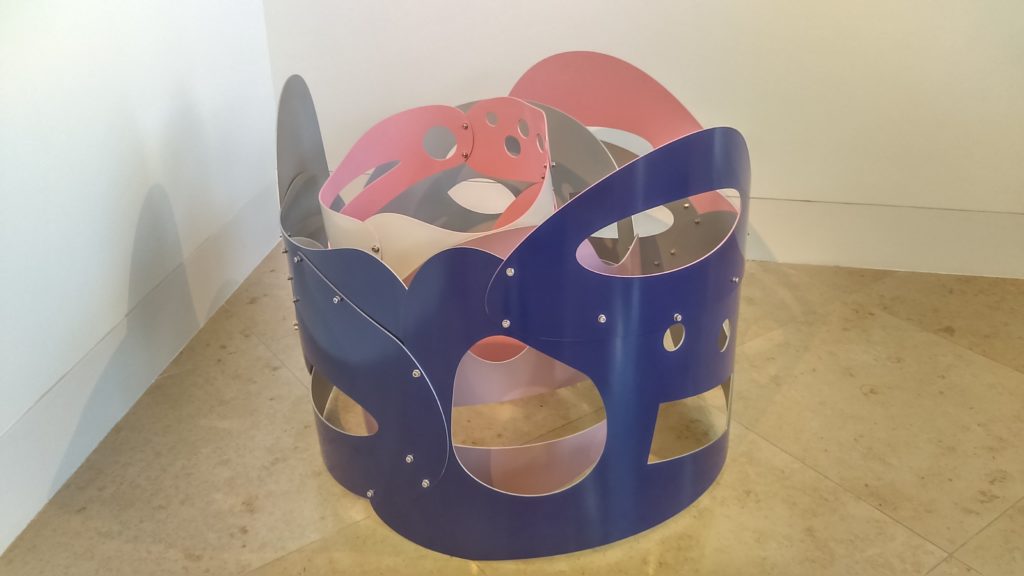 After the last couple of New Year blogs that have almost exclusively featured the work of women artists, normal service is now being resumed with a quick dash around half a dozen private galleries all of which are exclusively now showing sculptures, paintings and prints by men. Clearly, it’s a situation that reflects the wider discriminatory power structures that permeate society in general but I also wonder whether it also relates to the possibility that the sexes have separate aesthetic sensibilities. By which I mean that maybe men relate more to the work produced by men on an intuitive, subliminal level and so, as a consequence of their historically having had much greater purchasing power, have valued and promoted it above that of the women’s work they instinctively find to be less appealing, relevant, resonant, comprehensible. That certain concepts and concerns – as well as their material manifestation in specific shapes and forms – might somehow be gender based. At which point I have to admit that I think I’m probably rather out of touch with current contemporary thought on such socio-politically sensitive matters and have no idea as to what is the accepted consensus position if, indeed, one does exist. And that being the case, I think I’d better tactically side-step my way around the quandary avoiding any further comment other than to say that were I have had to take part in some kind of blind tasting assessment, I think I would have guessed that all today’s artists were male. Although, since I also then had mixed feelings about some of the quality of the works on display, I wonder what that then says about the fluidity of my own aesthetic positioning. 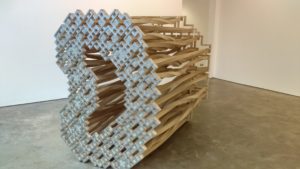 As for the first stop on today’s trail, where the Lisson Gallery‘s Lisson Street space is showing work by Richard Deacon, he’s one of those artists whose work I’ve always quite liked but never liked quite well enough to really become overly enthused or excited by it. And those are precisely the feeling that I’m left with again after pondering the works in the current show. The largest, most complicated piece, I Remember (see above), – in which dozens of lengths of wood have been twisted and turned and bolted together to form a loose scaffolding frame – is, I think, the least successful. The manufacturing process must have involved an enormous amount of time and effort with a team of assistants all devoting their best efforts to shaping all the different bespoke parts before carefully assembling everything together and then proudly standing back to admire their handiwork craft skills. And, yes, it does sort of look intricately clever but, unfortunately, it just reminds me of all my own less successful attempts to fit together Meccano parts as a kid, or those occasions where I put up shelves only to see them falling right down again. Or, more recently, some of those loud unpleasant arguments I’ve had with the assembly instruction leaflets that accompany flatpack furniture kits. 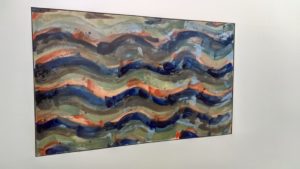 More appealing, to me anyway, are the pair of glazed ceramic wall pieces that resemble flat screen TVs that have been frozen into holding their abstract patterns, or the ink sketches of overlapping grids, all of which look more stylish and less effortful than Deacon‘s other larger works here. Whether the latter – being bigger, weightier, showier – might be construed as being more typically masculine is perhaps open to question but the thought of their construction does perhaps conjure up the unfortunate stereotype of the sad man in a shed fetishising his tools and polishing his nuts and bolts before desperately searching for that missing screw. 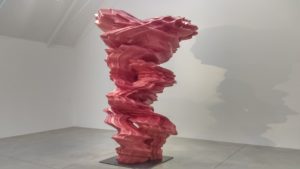 Holding that somewhat tragic image in mind, I depart the show and cross the road to enter the Lisson Gallery‘s other nearby space in Bell Street where Tony Cragg is offering up his own latest constructions for inspection. And it’s hard not to think that here is the work of a kindred spirit for, again, the space is filled with complicated sculptures either carved from wood or else cast in bronze, all of which suggest long hours of detailed planning followed by long days of sawing, gluing and chiselling, or moulding, casting and polishing. The end results resemble the kinds of natural wind-weathered sandstone formations sometimes found in deserts. But whereas those in situ geological structures retain a powerful natural beauty and share a harmonious rapport with their cruel unforgiving environment, Cragg‘s manufactured versions look sterile and all being a bit too contrived. Although, when transported to their inevitable destination in the bland foyers of corporate foundation in the City they will doubtless look perfectly at home. 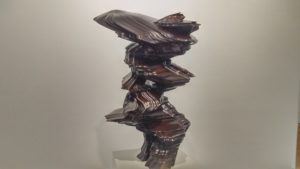 The macho mentality of the Abstract Expressionists who shifted the axis of the artworld from Europe to America in the years immediately following the Second World War, has often been commented upon and is something of a cliché these days. But for the subsequent generation of artists who enjoyed splashing and smearing pints of paint onto vast expanses of pristine canvas, this was seen as a style that could offer up equal employment opportunities so that for every John Hoyland there was a Gillian Ayres* right behind or, rather, by his side or, maybe, just a bit in front. That kind of energetic action painting, however, has been on a slow slide from ubiquity into unfashionability for quite a while now although there are still a few old timers trying to keep the flagging flag flying. And their relative rarity means that when one does occasionally come across their works, the shock of the old can really be quite surprisingly stimulating. That, at least, was how I felt when I happened to be walking down Piccadilly and thought I’d call into the Huxley-Parlour gallery which usually exhibits photographs but seems to have had a rebrand to accompany its refurb and is currently showing some large paintings by one of the aforementioned oldsters, the octagenarian Basil Beattie. 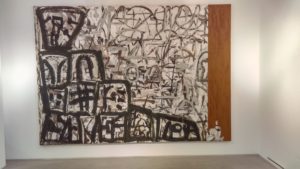 If there’s a vague theme or quirky characteristic that runs through Beattie‘s work then it’s the inclusion of what look like crude architectural features – a dome, some steps, a colonnade – into the otherwise randomised squiggles and swirls that tend to fill up the bulk of his canvases. I think these features or, rather, suggestions of features, are perhaps meant to give a sort of familiar grounding for the viewer to cling to when trying to come to terms with the other more generally chaotic surroundings. Or, to use a musical analogy, I think they’re the visual equivalent of the kind of recognisable tunes that bebop jazz musicians used to use as opening ice breakers before riffing off into their free-form improvisational meanderings. Well, just as some people love the exhilarating abstract sax solos of Coltrane and Parker, and others hear only noise, I suspect Beattie similarly divides opinion, although I’m fairly middle of the road equivocal, humming along happily to some of his works while others seem to fall off key or fail to develop successfully. Incidentally, the half dozen works on show are crammed into the fairly small space of the gallery but whereas in most circumstances crowding paintings together damages their prospects, I think these big beasts look bigger and better when they huddle and dominate a space as they do here. 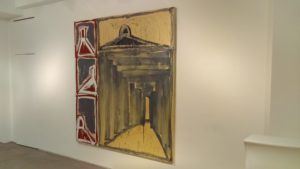 By happy coincidence over at the Bernard Jacobson Gallery there’s a display of works by one of the great original American Abstract Expressionists, Robert Motherwell, although the show consists of a wide selection of his more reasonably sized prints rather than his vast muralistic paintings. Composed mainly of great blotches of black ink, for the most part, the prints seem to be mini-versions of the paintings rather than artworks specifically constructed to take advantage of the different medium through which they are being expressed. That being the case, however, it does give an opportunity to consider just how much of the power of the painted originals was directly realted to the nature of their overwhelming size. Sad to say, I think it’s quite a bit, as the prints come across as just a wee bit thin – as sort of one-sided Rorschach blots without the symmetrical twin that make them interesting. 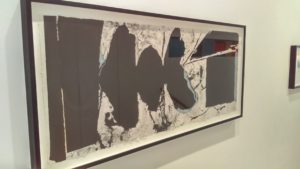 There are more prints to see over at the Cristea Roberts Gallery with a display of works by Ian Davenport but again, most of these seem to be more like printed replications of painted originals rather than specific works in their own right. So that whereas Davenport has made a successful career from dripping parallel lines of emulsion paint down the sides of canvases and then strategically wobbling them about to give a little kink at their base, it’s obviously not a process that can easily be repeated with watercolour on paper. Consequently, some kind of screenprint process has been adapted and while the results are still very colourful and pretty they lack the luscious sheen of the painted versions. 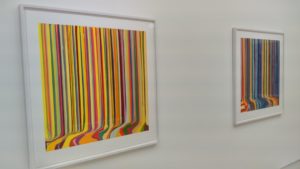 A journey across town takes me to the Pangolin gallery and a final stop that returns me to very similar sculptural territory to that from which I started off the day. For, here again, is a neatly curated assemblage of three dimensional artworks that look to have been carefully designed and constructed in the shed with the artist taking as much pleasure in the physical process of their practical manufacture as in the more artistical aspect of their inspirational origination. While it’s hard to find anything very much to actively dislike about Jeff Lowe‘s series of painted aluminium thingummyjigs – coloured metal sheets that have had holes cut out of them before being looped around and riveted together – they are perhaps just a little bit too whimsical for my masculine tastes. 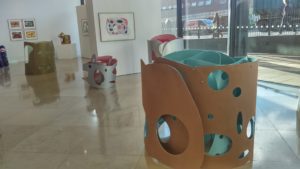 *Having written that line, I then struggled to then think of any other British female artists who produced that kind of large scale action painting, although a few Americans like Joan Mitchell, Lee Krasner and Helen Frankenthaler came to mind. And tehre are quite a few less energetic British female abstractionists like Prunella Clough, Bridget Riley and Tess Jaray who all produced abstract works of a more subtle nature.

One response to “Blind Tasting”