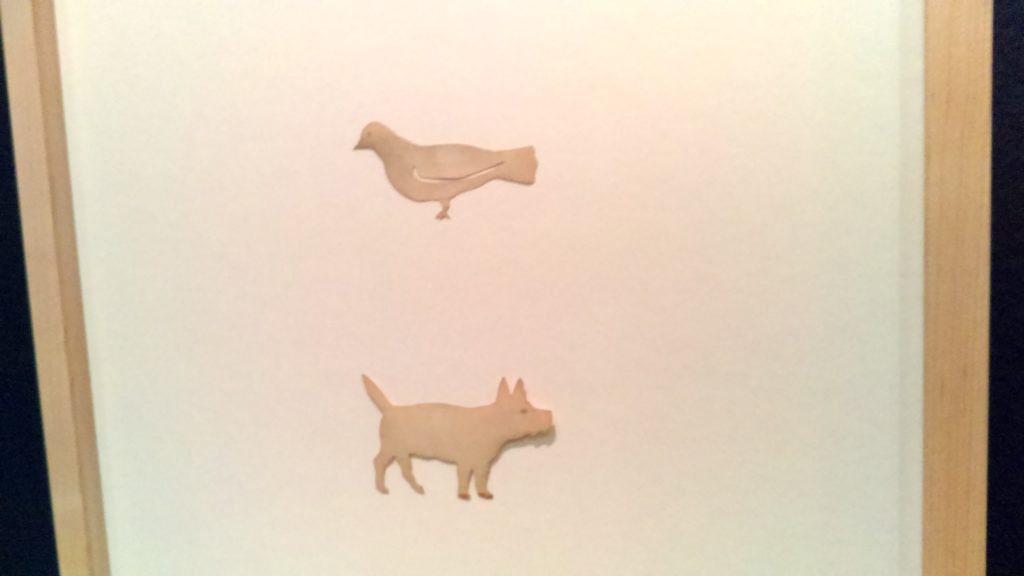 Head down to Piccadilly and the Royal Academy for the first big blockbuster exhibition of the New Year and I’m pleased to be able to report that the show is a good one. Picasso and Paper fills the dozen or so galleries of the main exhibition space with a cascade of works – drawings, cut-outs, collages, prints – all corralled together under the slightly tenuous thematic pretext of their being so-called works on paper. Although, having said that, the curators are permissive enough in their selection process to have also included a fair number of full sized oil paintings and fully cast bronze sculptures. Indeed, the first work that strikes one straight between the eyes when walking into the opening room is La Vie, one of those great big sadly Symbolistic Blue Period melodramas in which a mournful pair of nude lovers have some how met up with an equally depressed mother holding her baby. The quartet seem to be stood in front of some other paintings on similar themes and the thought arises that this uncomfortable group have just walked into the artist’s studio and either dressed up or dressed down to audition for the roles of character models. With the colour having been drained out of both the cast and their immediate environment, the tableaux is filled with that particular grey-aquamarine mix that set the characteristic tonal tone for Picasso‘s works of this time, and the whole haunting scene provides a marvellous opening introduction to what is an unabashedly entertaining and enjoyable exhibition that once again confirms the unparalleled ingenuity, creativity and productivity of the greatest figurative artist of the 20th century. 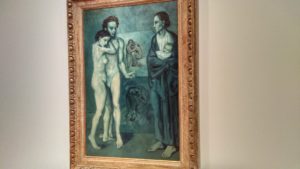 Nearby to the painting of La Vie is the somewhat smaller pen and ink study that preceded it, displayed here presumably as an exemplar of part of the main reason for the raison d’etre for the papery theme. The point being that the show is a combination of both sketchbook doodles, experimental preparatory sketches and other ephemeral items set alongside properly finished artworks – pencil drawings, inky etchings, collagist combinations and the like – that were specifically conceived as being best suited to being struck on paper rather than rendered in the more formally prestigious medium of oil paint on canvas. 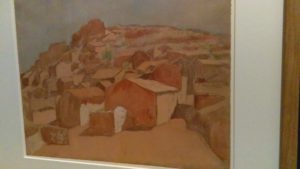 As to the value of including all the transitory works, well, I suppose the idea is that they can sometimes gives an insight into the mind of the master as he plays around with how to structure his compositions, mould his characters and otherwise ornament their situations. And indeed, as the preliminary drawing to La Vie shows, initially Picasso thought about placing himself in the scene and adding an easel to make it more obvious that the situation was staged in an artist’s studio. Evidently at some point, however, he must have realised that making the narrative less explicit added a layer of ambiguity and mystery that captivated the viewer’s attention and made the art all the more compelling and attractive. 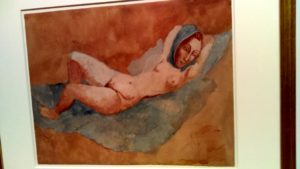 But back to the papery conceit and, since the exhibition is laid out in largely chronological order, the first item in this long story is a pair of small silhouette cut-outs of a dove and a dog neatly clipped out by the precocious eight-year-old prodigy. Although, perhaps a little surprisingly, these scraps of juvenilia are, in fact, not all that exceptionally wonderful. Not that I’m too familiar with the technical abilities of artists of that age, but they struck me as being about averagely competent – the most notable thing about them being not their aesthetic quality but the odd fact that young Pablo, or presumably his parents, thought them worth keeping for posterity. Of course, step forward, six or seven years later, when Picasso the young teenager has started attending art school and begun the traditional chore of copying the life casts, and he’s already showing just what a wonderfully naturally talented draughtsman he was. 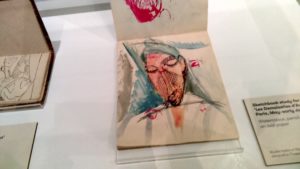 But it’s hard to imagine that Picasso enjoyed the formal aspects of the education process very much or that he paid much attention to his tutors, a supposition perhaps confirmed by the fact that there seem to be very few academic studies on show in the exhibition, though whether this was due to the artist being too busy to do his homework or not bothering to keep the results of these efforts is not made clear. Anyway, soon after leaving college, Picasso started out on his own independent adventurous romp through 20th century Modernism, following the poignant Blue Period tragedies with the lighter, more optimistic, Rose Period reveries and then, after a bit of a Neo-Classical interlude, embarking on the revolutionary radicalism of his Cubist experimentation. 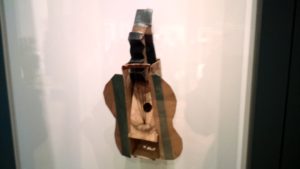 Such was the extraordinarily prodigious output of Picassoan productivity that even though I must have been looking at his work in exhibitions and books for about half a century, whenever some museum director or gallery curator thinks up a new theme or theory around which to stage a special display, there always seem to be dozens of fresh unfamiliar treats to savour. And such is the case here. So, while it was comforting (and discomforting) to be reacquainted with La Vie, I don’t remember ever seeing the small gouache Gosol Landscape before and yet it strikes me as not just a beautifully rendering of a beautiful scene but also, as the labelling suggests, a key work on the path from realism to the Cubist annihilation of the perspectival tradition that played such an important part in the development of Modern Art. Similarly, The Reclining Nude (Fernande), also painted in 1906, was new to me and holds the attention not just because it’s such a strange awkwardly disjointed pose but also because it also appears as an early precursor for some of the much later paintings that Picasso made in which he seemed to delight in dislocating his models and disturbing his viewers. 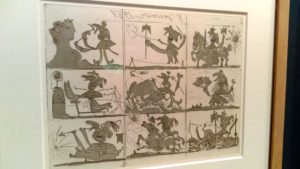 Which sort of leads on to the next room which is dedicated to Les Desmoiselle d’Avignon, that most violent thunderbolt and lightning strike that truly ushered in a new world of artistic avant gardism. Sadly, if perhaps understandably, the Royal Academy haven’t been able to borrow the original work which hangs in New York’s MOMA but there’s a full size copy that still stuns by the sheer audacious radicalism of its incongruous absurd magicality. Some hints as to its origination come from the collection of various notebook studies that are displayed here, the most intriguing of which are those that reference the mask-like heads given to the two ladies situated on the right hand side of the painting. I don’t think anyone can ever get used to looking at these faces, they’re just so jarring and awkwardly odd. Part of their strangeness being due to the fact that the lines that appear in the original pencil drawings to represent a shaded area of the face turned away from the light, also reappear as broad black lines in the painted version, whereas common sense and five hundred years of artistic tradition says that they should really be replaced be simple tonal darkening. 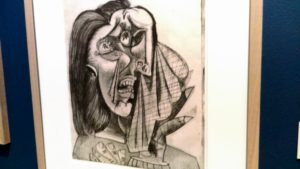 It’s not the only brilliant example of illusionary illogicality of Cubism in the show. The next room contains one of those very large bronze busts (again Fernande, I think) whereby the face is not very satisfactorily recomposed of jagged chunks and lumps of metal. The end result is a bit of a mess and definitely not one of Picasso‘s great successes but since the whole idea of Cubism was to find a new way of representing three dimensional space on the two dimensions of paper or canvas without resorting to Renaissance perspective, the idea of then trying to somehow reverse re-engineer the process to produce a Cubism in a 3-D sculptural format seems to me to be utterly irrational, unnecessary and bound to fail. Nevertheless, the compulsive experimentalist evidently thought it was worth a go and maybe it was worth trying just to confirm that he route was an aesthetic the dead end. 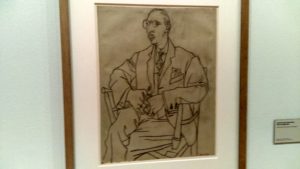 At which point it’s perhaps time to pause and reflect. Having not yet even reached the halfway mark in the exhibition or the autobiography – it’s only about 1908 and there are seven or eight more rooms to go and another 65 years to travel – I’m starting to flag. Picasso was just so extraordinarily prolific and inventive that he’s like some hyperactive child asking non-stop questions and then answering them in paint or crayon or pastel or ceramic or whatever comes to hand – and then changing his mind and answering them in a different way which then sparks off another question and another and another and on and on and on until everyone is left uplifted, astonished and exhausted. In short, I think this is an exhibition that definitely warrants two or three visits and even devoting two or three blogs still wouldn’t get anywhere near giving it the full credit that it deserves. 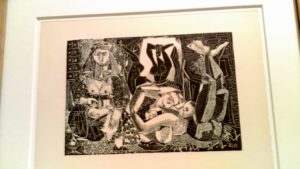 Which presents me with the problem of how to then encapsulate everything else about the exhibition into the final paragraph at my disposal. And all I can think of doing is to list a few of the other highlights – the exquisite line drawing portraits of Stravinsky, Diaghilev, Cocteau and friends; the precious Cubist guitar made of cardboard and string; the famous pair of cartoon strips ridiculing Franco; the painful sketches preceding the construction of Guernica; that series of prints showing different stage in the production of Les Femmes d’Alger as Picasso chops and changes the different forms of the characters, the bent paper sculptures showing reworked characters from Manet‘s Dejeuner sur l’Herbe; the incredible proof page of prints used to illustrate La Celestine. And, finally, the work that closes the show: the last self-portrait, that looks a little nervously back at the audience but with the unblinking eyes wide open, taking everything in and still thinking how best to replicate the vision. 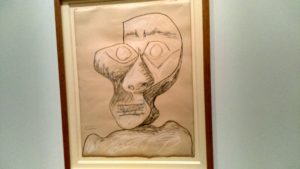