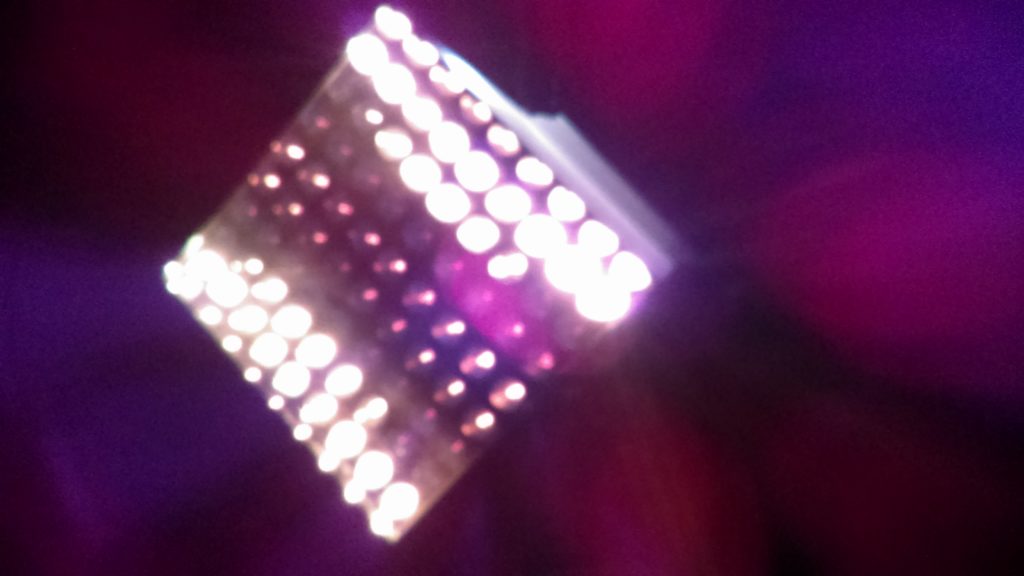 Head down to Charing Cross tube station and exit onto the Strand, where I call into a Pret a Manger to munch through one of their soggy bacon and egg brioches before continuing on and turning into Somerset House, crossing the Palladian piazza to get to the South Wing entrance, whereupon I pick up a couple of leaflets from the information desk before making my descent in the lift that takes me to the glassy Modernistic subterranean vaults of the Embankment Galleries sited therein. There’s a horrible £14 charge to get in to see the new exhibition here but my National Art Pass brings this down to a slightly more reasonable £7 although there’s then a bit of a delay while the manager is summoned in order to process my discounted entrance fee. I’m advised by the charming pair of youthful invigilators behind the desk that they require his aid as ‘…the system is playing up today…’ and I’m tempted to start a grumble about the drawbacks of modern technological systems, the dangers of artificial intelligence, the curse of robotification and the…when the man in charge arrives, pushes some special override buttons on the keyboard and advises that I may now proceed to enter the first room of the show. At which point a voice behind the desk calls out to caution me that the initial exhibit contains flashing lights. 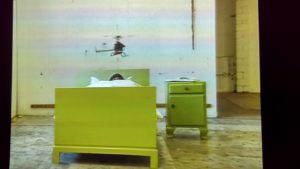 Maybe I’m looking a bit older and more decrepit than usual and there’s a health and safety worry that I’ll be so startled by the disorienting lighting effects that I will stumble, suffer some kind of infarction or else be struck by a range of other deleterious inconveniences. I’m tempted to explain that it was my generation that invented stroboscopic displays and that I’ve been inured to their discombobulating effects since attending Manchester University discos every Wednesday and Saturday during the course of my studenty salad days, since these occasions would always, without fail, reach a concluding terpsichorean frenzy marked by the spinning of Hawkwind‘s Silver Machine accompanied by the exhilarating rhythmic blinking flash of a pulsating lightshow accompaniment. 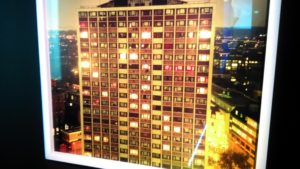 As it is, the NONE Collective‘s J3RR1, A Planned Torture, seems rather tame by comparison and the varied patterns that it’s couple of dozen of old bike lamps make as they switch on and off accompanied by the clatter of what sounds like a bunch of ancient electromagnetic solenoid switches, has an almost quaintly old fashioned analogue feel to it. According to the label it seems to have been made only a couple of years ago so presumably it was the conscious decision of the artists to present their work this way with a sort of retro effect and avoiding the use of the far more slick and versatile LED units that are so very ubiquitous these days. As for the next item on the agenda, that’s a short video that introduces a bit more modern piece of electronic kit in the form of a small drone that, as it’s name so accurately suggests, makes an incessant mosquito buzz as it whirrs above the head of a man asleep in his bed. Apparently, it’s Roman Signer, the artist himself, who is enfolded within the arms of Morpheus and dreaming of insect bites, but what is his connection with the previous artwork and what actually is the wider theme of this thematic exhibition? 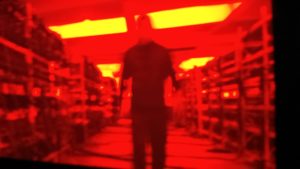 Perhaps the next pair of items will offer up more helpful clues. So, what is it that links Rut Blees Luxemburg‘s photograph of a tower block housing unit pictured at twilight when the inhabitants are returning home and switching on their lights to create a randomised chequerboard of enlightenment; and Joseph Wright‘s painting of a cotton mill at night, where the factory glow of industrialisation contrasts against the prettier natural luminescence of the full moon set in the silvery skies above? Still grasping for a connection? I confess that I was and I’m not entirely sure that the show’s title, sub-title or the paragraphs of promotional puffery on the accompanying advertising flyer are all that very helpful in providing much of a clarificatory explanation. But here goes – 24/7: A Wake-Up Call for our Non-Stop World is ‘…inspired by Jonathan Crary‘s book of the same name (and) holds up a mirror to our always-on culture and invites you to step outside of your day-to-day routine to engage, reflect, reset’. 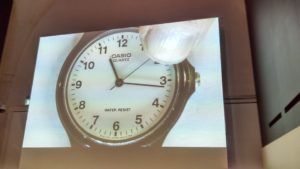 Not having read the book, I feel at a bit of a disadvantage although having now, subsequently, done some cursory on-line post-exhibition research, I think I’m right in saying that Crary‘s main idea is that while we are told that our brave new world of technological interconnectivity and novelty is leading us towards a utopian future of wonderful loveliness, in fact, it’s all really just part of a neo-liberalistic, late capitalistic plot by the establishment and its big business co-conspirators to control, surveil, subjugate, and exploit us all. And that part of this devilish dystopian plan is that the majority of the masses must be made to continuously engage with the system whether through work or play, as producer or consumer or both. The key part of the equation being that, unlike all previous historic examples of state control, this time the game is non-stop, never ending and has no pause button – that we are all essentially on an existential merry-go-round, mere human hamsters unceasingly revolving round a wheel that keeps going forever on a journey to nowhere. 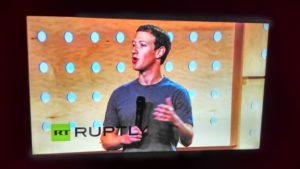 I’m not sure that I need to go to the trouble of actually buying the book and reading it to get enough of the general picture to say that yes, well, maybe I suppose some of this is sort of right-ish and makes a kind of sense and that, yes, when I was a lad trying to dance to Hawkwind the disco did shut at 11.00; the only takeaway food was from a fish and chip shop that closed not much later; there were only two TV channels and they both shut down around midnight; few shops opened on a Sunday; the house I lived in didn’t even have a land line telephone; and computers were the size of houses and ran using stacks of punched cards. On the other hand, the Conti Club never seemed to close, I occasionally played cards through the night and the first job I ever had was working shifts in a factory that, like Wright‘s cotton mill way back in 1790, never closed and where some poor mugs had to work nights cleaning and repairing the machines so that the rest of us could keep the line working non-stop for the benefit of our own capitalist oppressors. Plus ca change, I suppose. And have things really got worse because there’s 24-hour rolling news; loads of fast-food outlets that now deliver to the door; and the fact that there’s a generation of daft kids who can’t switch off their phones and have to keep updating their social networking profiles, or watching you tubes of googling cats, or playing shoot-em-up computer games into the night, or have an overwhelming compulsion to read blogs like this one? 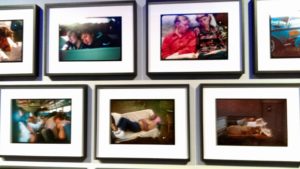 I sort of assume that the aim of the Crary book was to offer some kind of critical commentary response to that heap of rhetorical questions that I’ve just ranted out, presumably pointing out just why things are different now and what this all means for the future of humanity and how we should react and resist this appalling state of affairs. And, that being the case, perhaps the hopes of the curators was that their exhibition would act as an instructive and illustrative exposition of these ideas and a call to arms to rise up in opposition. Well, if that is indeed the case then I’m not sure that Zuckerberg or Musk or Bezos or Gates, or any of those guys who are responsible for our current state of manic affairs have got very much to worry about. After all, most people seem to be fairly happy with today’s digital dreamland and see it as a positive plus that they can get their bread and circuses delivered at the click of a button any time of the day or night. I’m pretty sure that there’s nothing in this exhibition that will cause the slightest ripple of concern to any of the inhabitants of Silicon Valley. 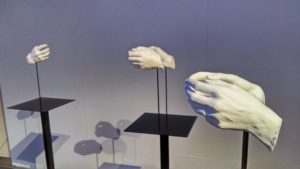 Which is not to say that there the displays here don’t contain a few diverting entertainments but there’s nothing that will really surprise or shock or cause anyone to re-evaluate their existence, change their habits or reflect too deeply on their personal lifestyle choices. And that perhaps leads on to another question as to the practical polemical possibilities of art and whether the format is actually ever any good at propagating particular positions. After all, it’s hard to believe that anyone signed up to join the International Brigades after having looked on Picasso‘s Guernica although, on the other hand, the great dictators of the past like Hitler and Stalin definitely went out of their way to try to ban any expressions of Modern Art and, of course, only very recently Xi Jinping locked up and then exiled Ai Weiwei – a fate that I’m sure none of the artists in the 24/7 exhibition need fear coming their way. 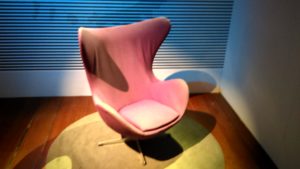 I suppose I sort of think that anyone interested in any of these kinds of ideas about recent societal changes and the impact of our soon to be 5G culture might be better off buying Crary‘s book which, perhaps ironically, seems to be available for instant purchase and delivery online for less that the price of admission to this show. In the meantime, for those who are curious as to what visual treats they might be missing, hopefully the photos interspersed in the paragraphs above give some idea. They are, in order of appearance:  Roman Signer‘s Bett video featuring the buzzing drone; Rut Blees Luxemburg‘s A Modern Project (Highrise) photograph; Ubermorgen‘s Chinese Coin (Red Blood) video which takes a tour round one of those server farms that supposedly mines for bit coins; Marcus Coates‘ Self-Portrait as Time, in which the artist counts off the seconds on his watch for 12 hours without a break;  Benjamin Grosser‘s Order of Magnitude video which cruelly mocks Mark Zuckerberg by mashing up video clips of the megalomaniac so that he keeps garbling on and on about growth and projections and increasingly bigger and bigger numbers; Adam Chodzko‘s Sleepers. Hole which groups together found photos of people sleeping; Esmeralda Kosmatopoulos‘ Fifteen Pairs of Mouths which show plaster casts of hands holding invisible mobile phones; the Diary Chair from the first series of the Big Brother TV show.  And, below, John Butler‘s Xerox’s Paradox posters for the future when we will all be working in happy union with our robot helpers. 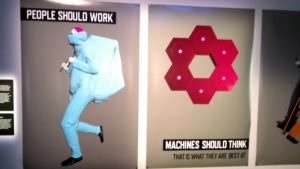 One response to “Override Buttons”